Golf is just one of those sports, either you like it or you hate it. Personally I can’t stand watching golf, I like sports that make you get on your knees and yell insults and get your blood pumping. Maybe when I’m older I’ll enjoy golf for its peacefulness and soft golf claps. Golf simulation games, however, are a different story. For me they fall just below tennis, they’re easy to understand, take some tactical planning, and I get into them far more than team sports.

For me the most difficult part of Real Golf was choosing my golfer. Real Golf comprises of a selection of Real Golfers from a variety of countries. Since there was no Tiger Woods or any other golfers I knew (my golf knowledge is limited to Tiger Woods, Greg Norman and Stuart Appleby) I decided to go with the only Aussie in the lineup, Karrie Webb. I seem to have made a great choice with Karrie Webb, out of all the chicks she’s got the best drive and there’s nothing I love more than driving that tiny ball down the range. That may be because I suck at putting. 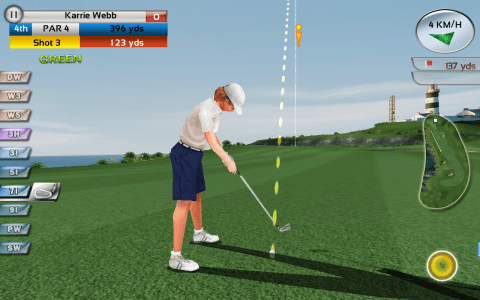 The game consists of several different modes, Instant play, Career mode, Challenge and Free play. Instant play lets you choose a golfer and then you play three holes on three different courses depending on which golfer you picked. Career mode involves you participating in tournaments (which vary in rules and length) around the world as provided by your handy little Real Golf Inbox. Challenges are self-explanatory, there are challenges that you either pass or fail. Some are easy; some are the most annoying things of all time – as with most challenges. Free play pretty much just lets you go through all the holes of a particular course and drive, putt and recover to your little heart’s content, in total there are ten courses which you have to unlock as you go. 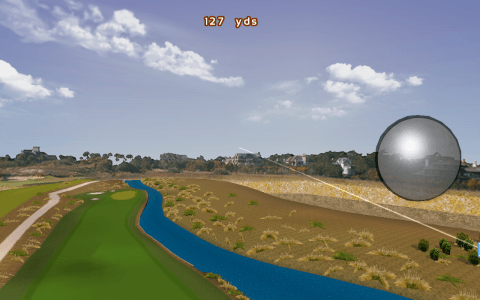 The controls are pretty standard for a golf simulation. First you choose your club (I tended to skip this as I have no idea what the difference between any of those are, but it didn’t seem to affect my game too much which was good), then where you’re aiming, the power of your swing, and where you hit the ball – or if you hit it at all. There’s also a wind-meter but I never found that to be too effective either. The game makes it pretty straight forward, the power meter has a little flag as a reference to what power you should aim for, there’s another big yellow arrow to show you where to aim your drive, and the centre of the ball where you should hit it is the green part of the meter. 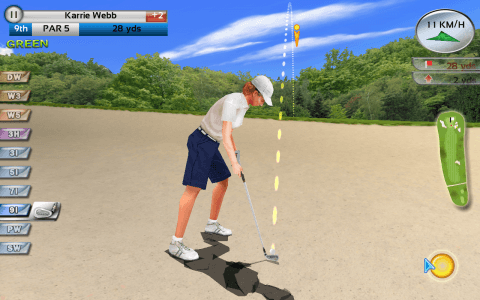 Putting is the most annoying part of the game for me, at first there is a grid with a line that shows you the path the ball will take and then you can aim the ball accordingly. As with all putting there are those near misses that will make you want to tear your hair out, but the biggest issue that really annoyed me was that there was a huge lag when it came to a ball being sunk. Not all the time, but half the time the game would freeze a couple times for a few seconds as the ball would stagger its way to the hole. 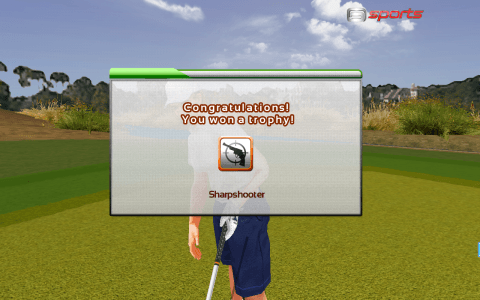 Playing competition mode, or just against any other characters, can be frustrating because you have to watch each player line up his or her swing. There is a ‘next’ button which fast-forwards from there to where their ball landed but if you’re playing through several holes you get tired of watching and waiting for others to finish their turn. 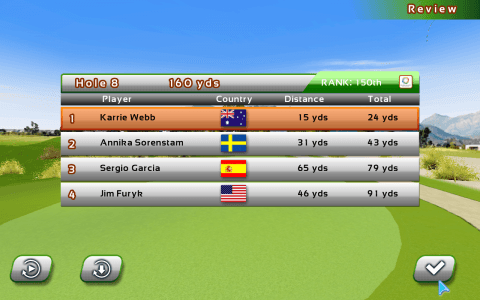 There is also a multiplayer version where you can either play online or create your own LAN room to compete against people you know. To be honest, I’ve always seen golf as a fairly solitary sport, but for those of you who would like to get their competitive spirit on, I encourage you to give it a go.

Visually, as with most animated Real people, it’s pretty shocking. The golfing greens and whatnot are fine, but the people are this awkward mess of angles that move unnaturally and don’t swing a club in a believable way. When you take a far shot the angle will change from behind the golfer to shooting from the hole and follow the ball in a way that isn’t necessary because you can’t see the thing anyway.

Real Golf 2011’s backing soundtrack absolutely screams golf game. The music wouldn’t have worked with anything else, either it was written for the game or chosen out of the variations of golf game soundtracks there already are.

Despite lag and graphic issues, Real Golf 2011 is still a decent golf game. It’s fun and a bit addictive, the career mode and challenges give you enough to do while also making you want to play through and earn that Real Golf cash.