The first thing I tried the headset out on was Fifa, not what you’d really need it for, but I was pleasantly surprised because it actually did make a difference. Each layer of sound was distinguishable, from the commentary to the crowd, even to the sound of the ball hitting the goal net. But that’s not the kind of game that you’re going to be caring about the placement of the sound. So then I tried a shooter game.

Now I’ll have to admit, surround sound for headphones? Didn’t completely believe it. I mean sure, I’ve had experience with some awesome headsets in the past, but getting that pinpoint accuracy that you need for games to come from a headset? Well, if anyone can do it, Razer can. 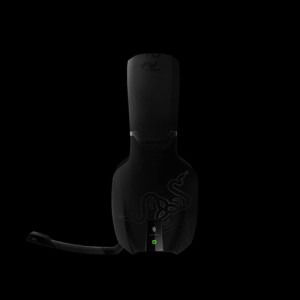 I don’t have a surround sound system set up at home, I can’t deal with that many wires and my lounge room just doesn’t have the right layout for it, so I listen to game sound from my TV. Listening through the Razer Chimaera was a totally different experience. Instead of getting an estimation of the direction with some general confusion, I knew where the sounds where coming from. It allowed me to actually know exactly where a gun was being fired from. It felt as if I wasn’t wearing a headset at all, but that the sound was coming from speakers around me. Or, hell, that the source of the sound was originating from around me.

You can adjust a few settings from the base station, such as whether it’s standard, heavier bass, or louder treble. If you really want your socks knocked off, go for the bass. Especially if you’re planning on sampling some music on them. As a girl who loves her bass, it comes highly recommended.

Now, the headset controls. On your left side you have the mic that swings down and automatically goes on, and goes off when you put it back up. Some people might not like that it isn’t retractable but I kinda like the swing function. It’s hip, it’s cool, it’s swing. There’s also the standby and mute button, as well as mic volume control. On the right you’ve got the mode (swaps between Xbox LIVE and team communication), mute, and sync buttons along with volume control. It’s a simple button layout that will be easy to remember and utilize quickly while you’re on the fly, no need to look, just feel, touch and go.

In playing with the mic I found it worked well and was quite clear. Down side for me was that I didn’t get a chance to play around with the team communication feature (given that I don’t know anyone else as lucky as me who has a pair of these beauties), so I can’t speak on behalf of the ‘lag-free’ clear quality of it. 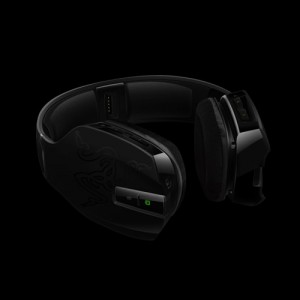 With a wireless headset the question is going to be, how far can you go? Obviousy they’ve got the specs and whatnot, but I decided to go for a wander and see how far it worked in practice. I managed to cover the whole area of my apartment and then outside the front door and halfway down the stairs. It might have made it further if not impeded by the brick wall. So, chances are, you’ll be fine.

The headset is also quite comfortable, except I only discovered that after loosening it a bit (I must have a large head). It’s quite heavily cushioned and due to this you might find yourself getting the overheated ears and head that is an unfortunate side effect of most headsets. After a few hours of gaming you might get sick of it, but that depends on your heat and claustrophobia issues.

Razer Chimaera 5.1 is $199.99 in the US or $299.95 in good old Australia. It’s definitely a pricey little gadget, but if you have the dosh to spare and want some freaking awesome hardware to help you pwn some n00bs, then I highly recommend the Razer Chimaera. Beyond the niggly little issues I had (which exclusively had to do with the batteries and charging dock, weird that), it’s a fantastic piece of machinery and it is incredibly sexy.

I give the Razer Chimaera 5.1

And for all of you tech guys, here are all the specs.