There is something inherently sexy about Razer products. I’m not sure what it is exactly, is it the cool logo embossed in an off-kilter way? Is it the matte black finish that screams stylish and quality? Is it the superior hardware? Is it the knowledge that I am sharing a product with numerous intense gamers who get money to beat other people at games? Maybe it’s all that, maybe it’s even more.

Razer love their innovative names, I bet there’s a whole division of Razer devoted to looking up the next Razer product’s name. This particular sexy Razer product is called Chimaera, which relates back to ancient Greek mythology about a fire-breathing female monster with a lion’s head, a goat’s body, and a serpent’s tail. Or, just any mythical animal with parts taken from other animals. (Thank you Google) 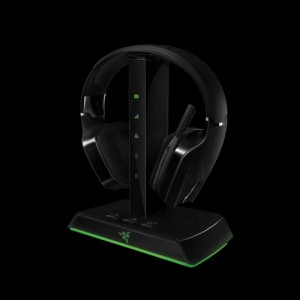 I’m not 100% sure why Razer decided that a mutli-specied mythical beast was the best description for the headset, but I’m not complaining. After all, it is a kick ass name and it definitely raised my interest enough for a Google search (I also learned that it is pronounced with a ‘k’ not a ‘ch’, just for anyone else who was curious about that).

The Razer Chimaera 5.1 is a beast of a headset device, equipped with 5.1 Dolby Surround sound, it uses the 5.8 GHz frequency for protection against almost all wireless interference, and it can be connected to create a lag-free, crystal clear channel for dedicated team conversations. But enough about the techy stuff, I’ll get back to that later, how does it measure up in practice?

Like most Razer products, the packaging is beautiful. It’s got the black, green and clear thing going, the specs are written all over it, bragging about the incredible sound and oh my God, it is just so damn pretty. I mean, the headset looks like an art piece. The way each layer of packaging slots together is ingenious, you don’t need scissors to open it and yet it’s so damn secure. The package comes with the headset, charging dock, rechargeable batteries, several connecting wires for all your combination needs, power cable with three different region adapters, a few manuals, some stickers, and a letter of congratulations. Thank you Razer guy, thank you. 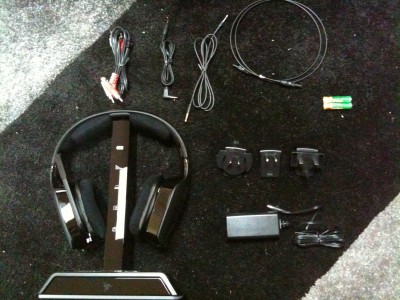 My first little issue comes with the charging dock adapter plug, it’s one of those nightmare ones that aren’t usable on power boards. I like the adapters that keep to themselves, only take up the room they’re meant to, and leave it at that. The Razer Chimaera adapter does not believe in the same ideals. It’s as if the adapter thinks it’s the top dog and no one should be around it because those plugs might taint it. My advice, don’t put it on the power board.

The detachable panel for the batteries was also a bit of a pain, it’s one of those panels where you feel like you must be doing it wrong because it feels like it’s just about to break. I actually had to get someone else to do it, because I couldn’t bear the thought of damaging my precious, precious headphones. But hey, once the batteries were in and the panel clicked back into place it looked fantastic again, unless you were told about the panel you wouldn’t be aware of it.

Connecting the dock to your sound source is a fairly easy task as the box will contain a bunch (though not all) of required cords. Plus, there is a quick setup guide that will take you the various methods you can use, and believe me there are a few. If you have any further issues (though I doubt you will, because even I could figure it out) then the FAQs on the Razer website will probably help you out. 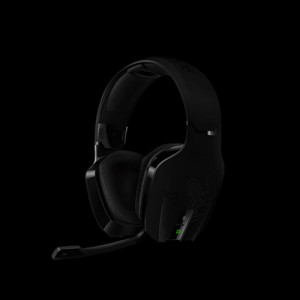 First thing you have to do before playing with them is charge the headset on top of the green glowing charging dock. I have a love-hate relationship with this charging dock. I think it’s totally gorgeous and a great-looking way to store your headset. However, I had really huge issues with charging it, it’s very particular on how to do place the headset on the charger, and a few times it would turn from the charging ‘red’ to ‘green’, but still wouldn’t be charged. I figured out this was an issue with the batteries, so I swapped them around, gave them a bit of breathing room, and then everything was peachy again. I don’t know if this was simply a faulty pair or if this is a common occurrence, we shall see if hordes of angry gamers take to the internet.