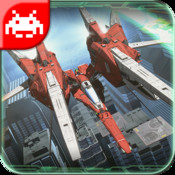 Arcade remakes are a popular app genre, given that they have that special mix of nostalgia and a simple enough gameplay style to translate well onto mobile gaming devices. RayStorm is a title that has been around since 1996 when it was an arcade release, so the question is how well has it transferred over and does it keep that same addictive, arcade style?

The game’s arcade style translates really well to the iPhone layout. There are two different types of gameplay, auto and manual. In auto the ship automatically fires for you, with the only thing you have to control being you moving around and using the special. In manual you control the shot, laser and special. 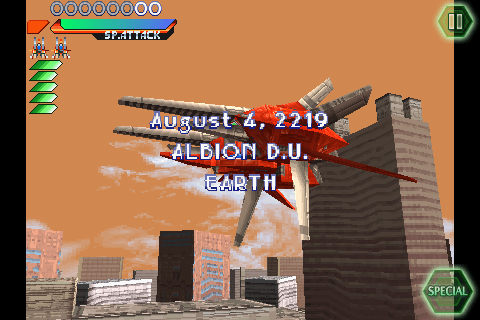 There are nine areas to play through, but you can pick which one to play, you don’t have to actually unlock any of them. This takes away from some of the incentive to play through them, plus there doesn’t really seem to be much of a difficulty difference between the levels, however it is fun enough to play through them, and the game certainly has that fun and intense arcade feel to it. 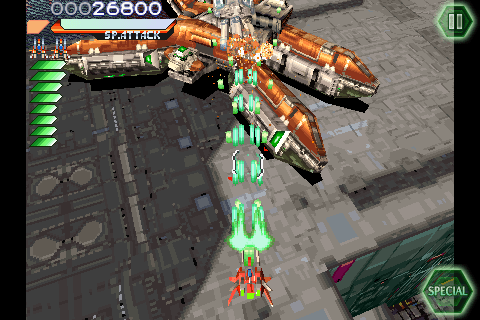 It doesn’t take a lot of time to play through the levels at all, especially since the game will be taking you through the level regardless of whether or not you kill all the enemies on the screen. You also have a health bar and a few lives you can go through quite easily, since your ship is replaced right away without pause. Even if you do die then you can just tap the screen and insert another ship in. The process is made as painless as possible, and the game is clearly just about you getting your awesome space ship firing action on, rather than tying you down with things such as going back to the menu screen, or even restarting the level. 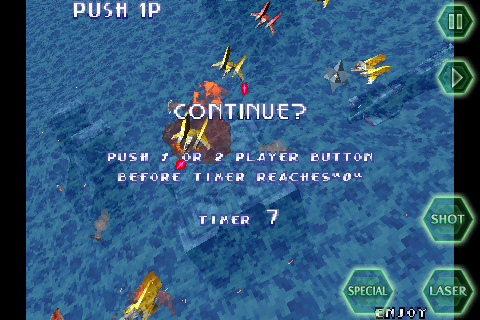 There’s an arcade mode and an iPhone mode that you can play through. The arcade mode is a remake of the original classic, from all of the original cut scene videos and whatnot, while the iPhone mode is an updated version of the game with more enemies and updated graphics and sounds. To be honest, the difference between them isn’t something huge, and it was actually nicer to play the arcade version because it had more of a feeling of depth and history to it. Plus it will be of somewhat more enjoyment and nostalgia’s sake for those who actually did play the original. 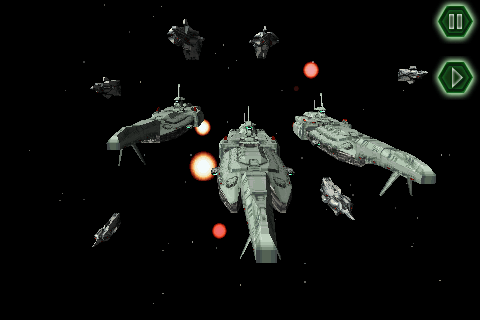 The game actually looks a lot cleaner than some arcade games get, that’s one of the reasons I sometimes avoid such games. Rather than having a constant source of explosions and colours bursting everywhere, like the typical arcade game, you can really tell in RayStorm where everything is and how to dodge and play through it with a lot more ease than you might experience in other arcade games. Yet it still retains that same intensity, because it certainly hasn’t got any less going for it, it’s just able to remain far more tidy and compact in a way that other games tend to go over board with. 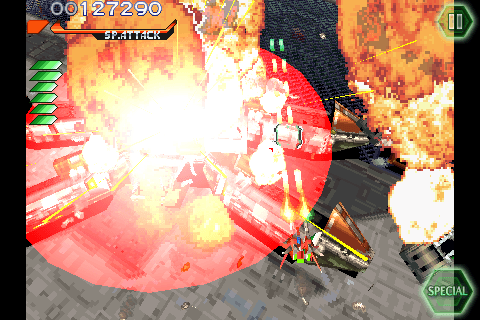 The modernized graphics do look a bit better, but to be honest the arcade graphics don’t look bad at all and are just slightly more blocky in a way that you can’t notice unless you look for it.

The soundtrack for the arcade mode in the game is just as much of a typical arcade game as the rest of it. It’s loud, energetic, and just about as intense at it gets. I’m not a huge fan of listening to such intense music while playing a game, but it would surely help if you were the kind of person who needs music to get yourself going.

The updated soundtrack in iPhone mode is a bit more chilled, and sits in the background a bit better. Personally, I enjoyed this soundtrack a bit more because I appreciate soundtracks that can be a bit subtler and don’t continually jostle the player for attention, but again that’s a personal preference, and if you want the nostalgia then you will probably prefer the arcade mode. In saying that the iPhone music is different, it is still quite clearly derivative of the original soundtrack and can still be appreciated as such.

RayStorm has all of the charm of what you can expect from an arcade remake of a game, with the addictive nature, as well as the insane visuals that you can expect from a game like this. It must be noted that the game is fairly expensive, and isn’t really all that long, but if you are a fan of the past RayStorm games, or arcade games in general, then this is certainly a game that you should look at getting.