Since originally releasing earlier this year for the iPhone, Gameloft’s Rainbow Six: Shadow Vanguard has been rather successful for the platform due to the way the game handled multiple commands on the touchscreen. As you would guess, having a property such as Rainbow Six on such a small device is a stretch, but Shadow Vanguard somehow pulled off this task with ease on the iPhone and set a bar for future contenders in the market. Fast forward just a few months, and we now have a brand new version of the tactical shooter out on the iPad, boasting HD visuals with the same gameplay that made the title a hit, and now with a much larger screen to make your thumbs even happier. So how does this Rainbow Six title actually handle on the device? Here is my review for Rainbow Six: Shadow Vanguard HD for the iPad. 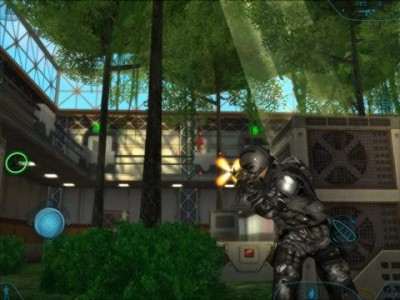 Story
As with most Rainbow Six titles, the main story in Shadow Vanguard revolves around leading a squad to defeat a terrorist organization. It’s not to deep, but the game’s small cutscenes do a decent enough job at making these tasks feel important, so this plot is pretty easy to follow due to the simplicity. One thing about the story I would have liked to see more of was a bit more background on the main character I was playing as. Not having that depth lead to everything feeling rather generic character wise, but thankfully this genre is more about the gameplay than some elaborate story, so most fans of shooters shouldn’t feel too unfulfilled in the long run.

I always have felt the iPad is more of a pick up and play platform, and I can easily say that Shadow Vanguard’s lightweight plot fared well for this game as you can just jump right back in and not have to worry about the details you left behind during the last play session.

Gameplay
If you have ever played a title in the Rainbow Six franchise, you should feel right at home here. Instead of using the run-n-gun method of gameplay one would expect from a shooter, everything is much more tactical where you must think before you act. Doing otherwise will lead to a lot of game over screens and frustration. That is the main charm of Shadow Vanguard though, as this style fits well with the iPad, where nearly all of the strategy can be thought out and easily executed with the touch screen commands.

There are 11 missions to go through within the game, where the player takes their squad through different areas, planning out a strategy before attacking foes. Players control the main character with the touch stick, and pull the camera on the right side of the device to turn and look up and down. The active weapon is located in the upper right-hand corner, and the player can quickly switch between guns with the slide of a finger. While this mapping of controls certainly works well, extra commands appear at times to allow control for your squad members. For instance, you can have both members stand on each side of a door or behind cover and issue an attack based on the command selection given. 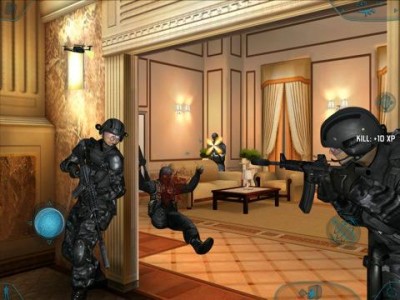 This cover-based combat is the main gameplay style that Shadow Vanguard utilizes throughout, as players can duck behind pillars, boxes, and any area where a green marker is shown. Team members can also be assigned to these points, but sadly, this system also takes away a bit of freedom as the player must only take cover at the pre-determined points. Thankfully, each stage provides missions that each have a different feel, adding in a bit variation, so you never feel too much repetition in this formula.

One of the most useful tools in the player’s arsenal consists of the snake cam, which allows for you to get a sneak peak at the next room. While in this mode, any foes can be marked with a simple touch behind the safety of a door or barrier, allowing for your team to make quick work of their targets. Enemies behind doors can also be stunned with a flashbang or blinded with a smoke grenade, giving your squad the upper edge as they burst into the room. 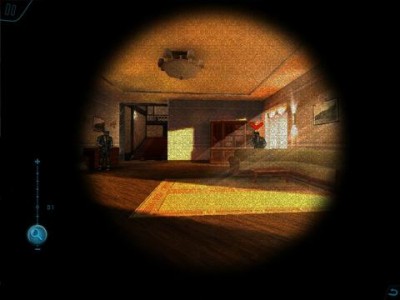 As the game progresses, XP is rewarded and as a result, new ranks can be earned that give perks such as new weapons, gadgets, and upgrades. None of these change the feel of the general gameplay too much, but they can result in better accuracy (such the red dot sight) and add in bit more strategy overall. The game rewards the player for performing these missions well, so head shots and speed are just as important as the element of teamwork.

While the gameplay is pretty top notch in this title, my biggest gripe comes with the game’s AI. Your squad-mates are not too proactive through the campaign unless you actually tell them what to do. Sometimes a team member will actually go after a terrorist on their own, but most of the time I would look behind me to see both of my squad members turned around, staring at the nearest wall. I guess you could also say that the enemy AI balances this, as many times the terrorists would just stand there as I busted through a door, begging to be shot in the head. With such sharp and tactical gameplay, I would have liked to have seen more of a challenge in Shadow Vanguard, as it was rare to see competence from any of the NPCs or enemies on the map.

Multiplayer
Found within Rainbow Six: Shadow Vanguard is a well designed multiplayer, allowing for co-op with up to two extra players, or a competitive online mode where you can do battle with up to ten competitors in 5 different maps. I really enjoyed the competitive mode, as the gameplay actually got a chance to shine with the much smarter human opponents. I also encountered very little lag or slowdown over wi-fi, which is a rarity for any online iPad game. I can say that the opponents online seem to treat the Deathmatch as a run-n-gun experience, rather than a game of stealth, but I was still quite impressed with the way the game handled itself online on the device.

Graphics/Audio
While the visuals in Shadow Vanguard are not going to hold a candle to their console and PC brethren, I must say I was very pleased to see the level of polish that went into the models and environments for this mobile offering. Animations are fluent and each character’s attire has been nicely detailed to look as realistic as possible. Environments are also beautifully designed, with blown up vehicles and tattered buildings providing a fitting atmosphere that the player can lead their team through. 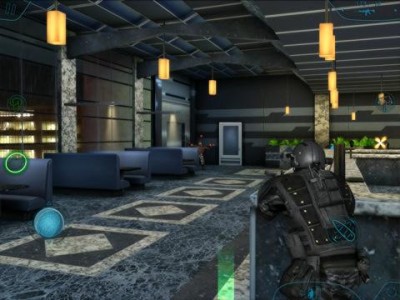 The music in the game wasn’t too noticeable, but the high level of voicework stood out with the cast giving decent performances to pull of the characters they portrayed. Minor touches such as the sounds of grenades blowing up and a silenced gun shooting a bullet truly put the player right in the action and tied in with the visual presentation nicely to provide one of the more realistic shooter experiences in the iPad’s gaming library.

Overall
Rainbow Six: Shadow Vanguard is a perfect on-the-go experience for fans of shooters and utilizes the iPad well to pull off it’s clever control mechanics. The AI does hold the game back from providing much of a challenge, but I still felt the game was fun throughout due to the high levels of production and the strategy that was needed to succeed in the single player campaign. The multiplayer found within was also memorable as it took all of the best elements from the standard game and let them shine with human opponents. While it is by no means flawless, for only $7, Shadow Vanguard delivers a well crafted formula that fits nicely with the iPad’s touch screen controls and proves that there is room for more hardcore titles on the device.

I Give Rainbow Six: Shadow Vanguard HD for the iPad: