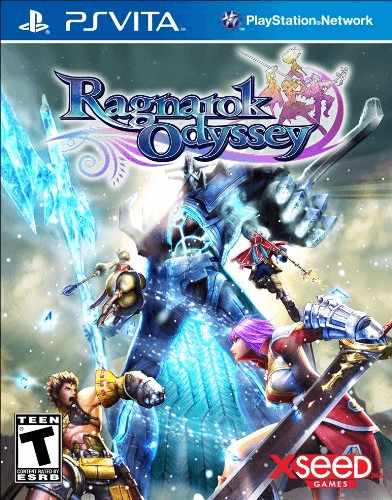 Overview:
Since the PlayStation Vita was released there have been a slew of different titles released for it. Some of them have been good, most of them have been bad and a few of them can be used as a selling point for Sony’s brand new handheld. Now one thing the handheld has been sorely lacking since release is a new RPG worthy of purchase in the West, while Japanese gamers have had a number of RPGs to experience and one such game is Ragnarok Odyssey.  Now that XSEED Games has brought Ragnarok Odyssey over to North America, is it worth your time?

Story:
Ragnarok Odyssey pulls on some large pieces of Norse mythology throughout its story and players will step into the role of a new recruit who has joined the fight against giant creatures which have come from across the mountain ranges of Rune Midgard and the people must now fight for their survival against these powerful foes. 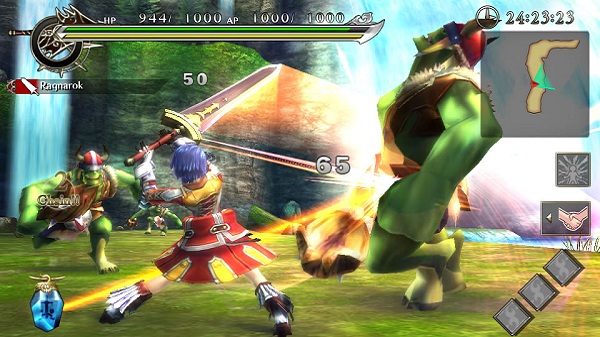 As some of you may know, Ragnarok Odyssey is an adventure game based off of the popular Ragnarok Online MMO but do not worry if you happen to have zero knowledge of the game, as Ragnarok Odyssey’s storyline is relatively light in content and players will often go many missions fighting against various creatures without seeing any actual story progression and even then the details about the game’s story is only present through optional NPC dialogue, so people can simply ignore the story entirely if they choose to.

Visuals:
While many games can claim that they have some of the best visuals on a platform let’s just lay it out on the table now. Ragnarok Odyssey is by far the best looking Vita game that I have played to date. The entire game just oozes with charm as the game’s cartoonish atmosphere lends itself well to the art style.  Enemies may go through a few palette swaps but they are gorgeous on screen while you fight through a number of different environments. 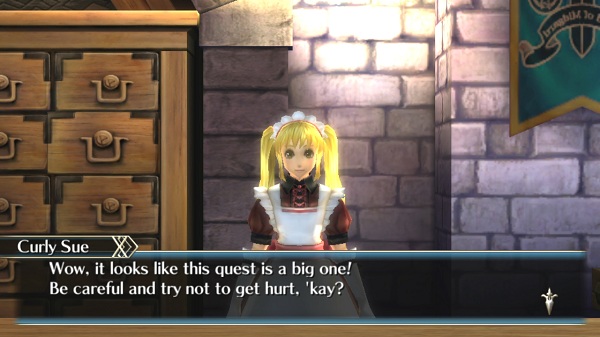 All of this is made the better thanks to a wide-ranging palette full of vibrant and varying colors and impressive character animations. It is worth noting that Ragnarok Online fans will easily be able to recognize some of the signature monsters from the game, though a few have received some design changes and a number of original creatures have been added in as well. There are even numerous cosmetic headgears that can be crafted that fans of the franchise will adore and normal players can aim for as a way to make their character more unique.

Audio:
As players make their way through the various missions in Ragnarok Odyssey it is impossible to not notice how superb the title’s background music is. There are a wide-array of songs that will play whenever you are going through a mission and in fact, you can even purchase these songs form an in-game store using basic money. These tracks can then be applied to any quest you feel like, so if you happen to find a specific background music that you love, then you can listen to it as many times as you wish. 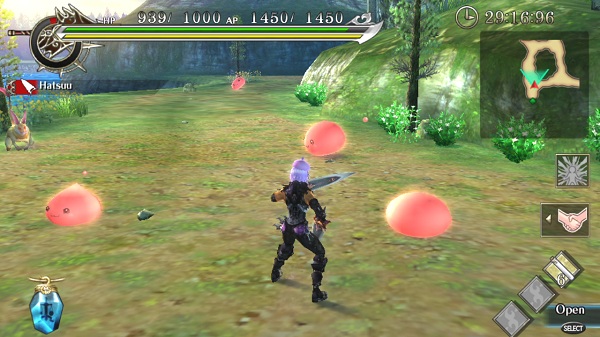 While there is no actual English dialogue in the game XSEED has provided a large number of character voices for the player to choose from as they are creating their character. These voices all have various ranges and provide a certain attitude for your character that is usually portrayed in combat via receiving and delivering damage as well as some in-game poses you can have your character perform.

Gameplay:
One of the first things that players must do once they start up Ragnarok Odyssey is create a character. Fans of customization will be happy to hear that there are 19 different hair styles to choose from, which can then be colored any color you wish as the entire color spectrum is at your disposal, as well as 18 different faces for both males and females. Players can then choose one of six different character classes to choose from which will provide them with their initial starting equipment and outfit.

These classes all have various strengths and weaknesses and each of these are shown off thanks to a handy chart that shows attack speed, strength, defense and health. Though it is worth noting that if you were to choose an assassin class, you cannot use long swords or mage staffs, instead you are restricted to one type of weapon only. If you do end up growing tired with the class you are playing it is worth noting that players do have the option to change their class at will shortly into the game. 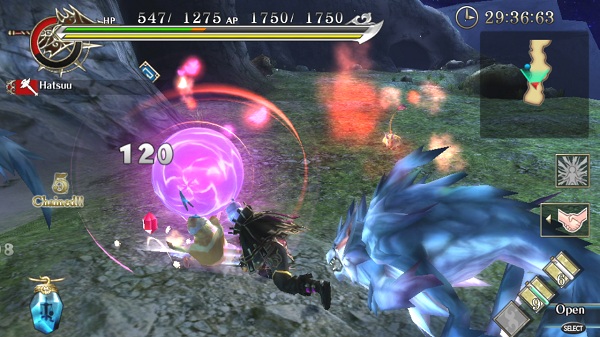 Players will make their way through the game by selecting various missions from the guild hall in the Fort Hub and each of these missions are rather straightforward. Players must either venture out to kill a certain number of creatures or gather a certain number of items, usually dropped from a specific enemy or from boxes/barrels in the area. It is also interesting to note that these missions are given half-hour time limits and if you cannot finish the mission in time or are knocked out three times, you will fail.

It is interesting to note that failing a mission is of little consequence however as it can be restarted anytime you choose to and you will still be able to keep all of the various loot drops you obtained in the fight before you failed. This system is rather interesting as it provides challenge while not punishing a player for being unfamiliar with enemies. Older levels can be replayed as many times as you wish, meaning that you can also farm for equipment or items as much as necessary.

As you venture out onto a mission you will be presented a specific map for that mission which is then made up of smaller maps that will be populated by creatures of all different kinds. These enemies will drop various objects such as crafting material, weaponry and cards which I will go over more momentarily. 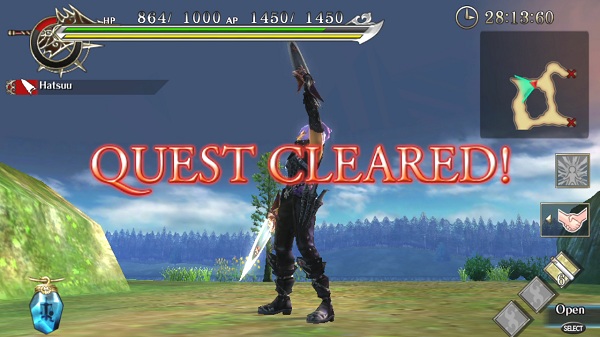 Combat within Ragnarok Odyssey is rather straightforward as players will be able to use the triangle button to perform basic combo attacks while the circle button can perform stronger, stunning attacks that vary depending on when you execute them. It is also worth noting that players also have the ability to dash both on the ground and in the air via the square button. This dash mechanic is almost essential for fighting most of the creatures in Ragnarok Odyssey as players can easily use dashes to strike at an enemy then retreat before they can retaliate.

Now it may sound like Ragnarok Odyssey is simply a hack and slash title and in a way you would be right in a way, but also incorrect. While Ragnarok Odyssey can be a rather mundane title early on, the amount of creatures and the attacks you can unleash upon them quickly make the game into one full of high-hitting combos that can launch enemies into the air or across the room. In fact there are even occasions where you are surrounded by enemies and you must defeat a certain amount to escape, making for some intense combat situations. 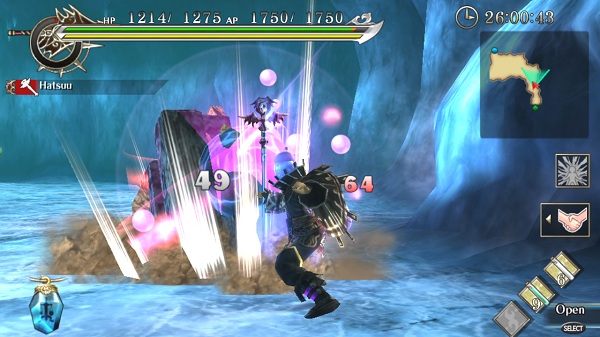 However it is far from an easy game as the title features a rather interesting leveling system. Or perhaps it would be better to describe it as a lack of a leveling system. The only way to make your character stronger is to find better weaponry or cards dropped from enemies or by finishing a chapter in the story which will automatically increase your character’s health. Players can refine their weaponry using items dropped from monsters and increase their attack while cards provide a number of different bonuses. These cards can be equipped to the player’s costume, with eight cards fitting into a fully upgraded outfit. These cards can add elemental properties to your attacks, increase the length of your dash, increase your attack, increase your defense and much more.

Although this card and refinement system is a rather unique take on character upgrades, it does feel like the lack of a leveling system can hold you back at times. There are times that you can come across a rather difficult opponent that halts your progress in the game completely. This then means that you will either need to find some cards to improve your health, attempt a class change or tackle the quest in multiplayer. 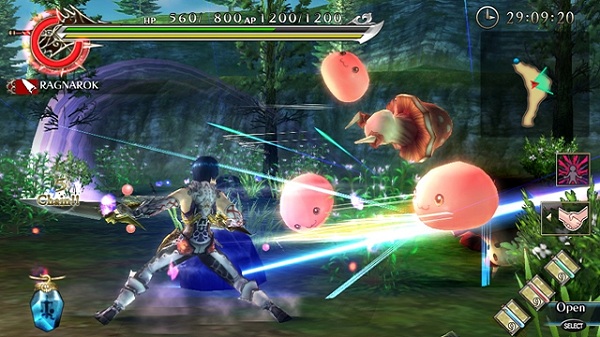 Thankfully Ragnarok Odyssey’s multiplayer system is absolutely a blast to play. Players can play either locally through ad hoc or through Wi-Fi in the game’s Tavern. Up to four players can team up at any given time and the matchmaking system is easy to understand. Players can either choose to search for specific rooms or select from a list of existing rooms. As you join a group, each one has a leader that will select a mission for the group to tackle, though it is worth noting that selectable missions are limited by story progression.

As mentioned before, Ragnarok Odyssey is at it’s best in multiplayer. Four player action is fast paced and highly addictive with smooth gameplay throughout nearly every match. The only time it seems to slow down is when someone leaves in the middle of a mission. Although there is no voice chat in the game, XSEED has provided a number of pre-set emoticons, though there is an in-game keyboard if you have something specific to say. 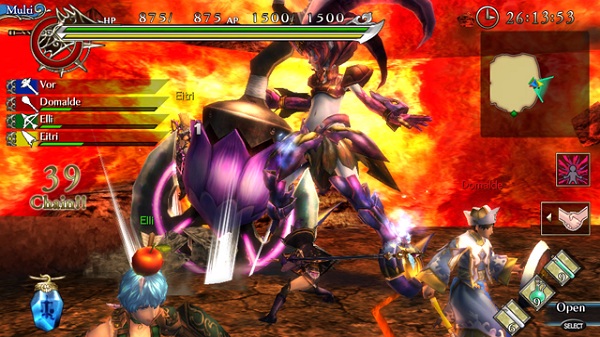 Now, being on the PlayStation Vita, there are a number of touch controls implemented into Ragnarok Odyssey as well. However you should not be concerned with this fact as the only mechanics delegated to the touch screen is the use of potions and various player interactions. These potions can be used to provide health, clear status effects or boost stats and by including them on the system’s touch screen it makes them easy to use in times of desperation.

Overall:
Ragnarok Odyssey is a title that should be on the must-have list for every PlayStation Vita out there as it not only provides addictive fast-paced action, but it also capitalizes on the fact that the Vita is a portable device with most quests only taking around five minutes or so to finish.  While it may have some issues with level progression and grinding, the game’s enjoyable combat, stellar multiplayer and tons of content, those who pick up Ragnarok Odyssey will find it a hard game to put down.