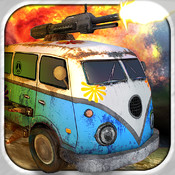 I honestly would not be surprised if I was told there is a total of one million zombie-themed game in the iTunes app store right now, there’s just that many. However what does surprise me is how unique and original many of these titles are. However original does not always translate to excellent. Enter: RIP Rally from Bravo Game Studios. While I’m sure the concept of a driving a jeep with a mounted automatic weapon destroying zombies has been done before, it’s certainly something I haven’t personally experienced on iOS devices. But like all ideas weather they be good or bad, never really go that far if they’re not fleshed out and RIP Rally is a prime example of this. 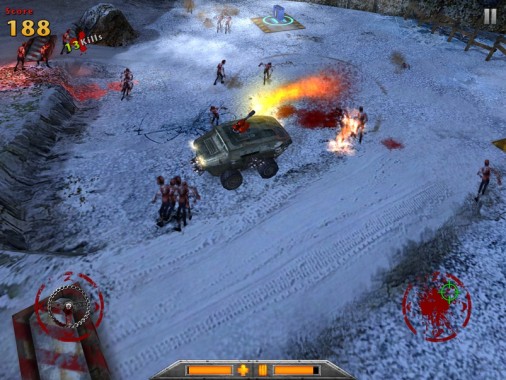 The concept is simple – you’re locked into an arena and placed into a vehicle with a mounted firearm. Your goal is to survive endless hordes of zombies that are then let into the arena. A simple an slightly original idea. The execution of this however is done so in a manner that is extremely cookie cutter in this day and age – earning points to upgrade your weapons and vehicle so you can replay the same damn level over and over again and try to get a better score.Of coarse if you want to speed up that process there’s also in-app purchases that are slightly encouraged as well. Furthermore advertisements are constantly thrown into the mix to annoy you further, which tends to feel a little less like a video game and a little more like an interactive banner you’d find on a website. In between these onslaught of adds is minimal gameplay where the player is given duel stick controls for movement and firing of the weapon. Anybody who is familiar with this concept on home consoles probably already knows how boring this as while it may give the player more freedom of movement, it also disconnects them from the action because you’re just pointing at stuff rather than accelerating a vehicle or firing a weapon. To make matters worse your other alternative for attack is to run over zombies, but that damages your ride as a simple touch makes you lose health. Difficulty is also poorly balanced. Instead of slowly introducing new types of opponents within each wave, they come out all at once. This means you’ll go from a round of only simple zombies to a round of only zombies which explode on impact and frustrating deaths. Worst of all is the only strategy you’ll ever need is to just keep distance from your enemies while shooting. So ultimately you’re simply just moving a little forward, stopping and keep going again like you would to prank your mates back when you were seventeen. Aside from upgrading your vehicle there is no sense of progression throughout the entire game as there are only three arenas to chose from as well. When you put all this together gameplay feels more like a tech demo to test out the engine rather than an actual game. This could be forgiven as just a simple title but with all these in-app purchases thrown in your face and advertisements popping up constantly it honestly feels like you see more ads than gameplay. This questions what the developer thinks of the consumer’s actual intelligence. 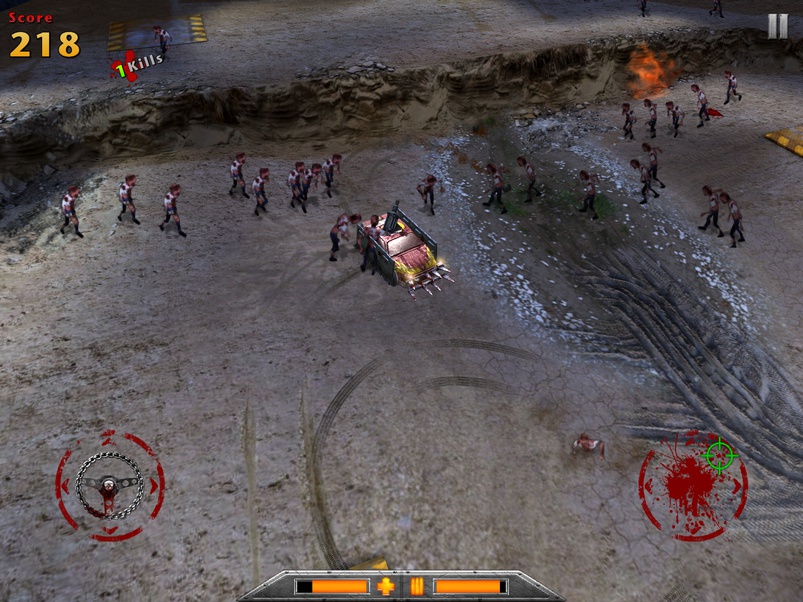 The best way to describe the audio in RIP Rally is to think of a typical wrestling intro where the wrestler storms in with outdated heavy rock music. This approach at the soundtrack works however as it is an arena-based title and is probably the only aspect of the game that doesn’t frustrate the crap out of me. Sound effects are a mixed bunch ranging from tolerable to terrible. While the gun fire and zombie moans could be improved they get the job done. However the announcer is cringe-worthy and will do next to nothing except constantly repeat the word “amazing” in the same annoying way it’ll urge you to put the game on mute. To further salt the wound the sound effect of zombies dying is an odd squashy sound that sounds bizarre and out of place. A death sound effect should make the player feel like they’ve done a good job or reward them for defeating their enemy, but instead here it’s like some cartoonish flysquatter noise that doesn’t suit the dark and gory tone of the game. 3D models are tolerable for the most part, but dark, gritty  and unattractive textures cover the game making it quite unappealing. The worst offender of RIP Rally beside the onslaught of in-app advertisements however is the zombies. The zombies are blurry and of less quality than every other subject in the game and are animated poorly. I honestly can’t tell if they are terribly done 3D models or pre-rendered 2D sprites like old school Donket Kong Country or Mortal Kombat. In a game all about zombies, you’d think a priority would be to make the zombies look good but honestly it’s one of the biggest flaws of RIP Rally. They look so terrible if feels like a mercy killing every time you murder one. 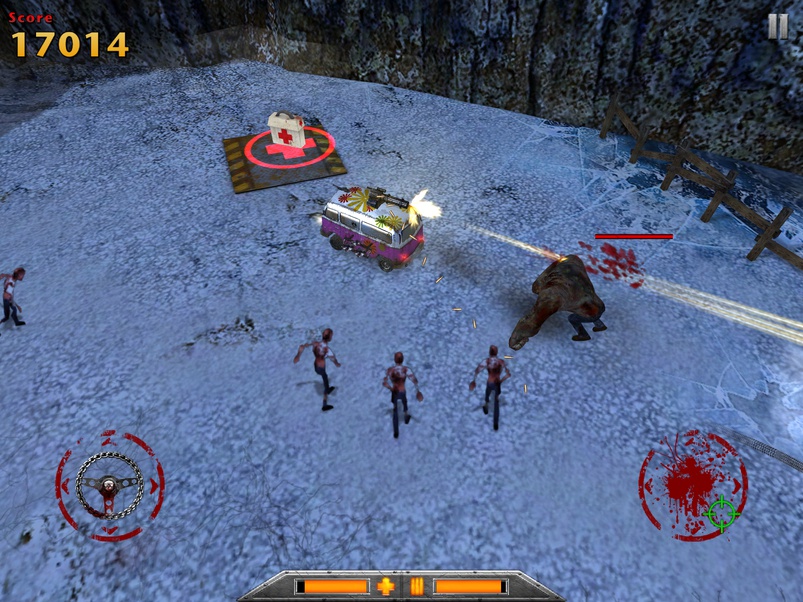 RIP Rally is a huge disappointment coming from such a remarkable and well established publisher like Chillingo. Gameplay is not engaging, short and frustrating, the game’s lifespan is short, difficulty is poorly balanced, the zombies look terrible, sound effects are a mixed bag and in-app purchases & advertisements are uncomfortably thrown in your face. Very little works in favor for RIP Rally. The core flaw however is that there truly is nothing to do- you play in a tiny arena for a few minutes and you’ve already experienced everything it has to offer. Then, instead of encouraging you to play more, you’re just shown a bunch of advertisements. My best advice to Brave Game Studios (and any other developer out there with similar intentions as this is becoming increasingly popular lately on mobile devices), is to remember you are not a advertisement agency, you’re a game developer. We’re looking for games to play not ads to watch. Better luck next time.