After much success in the iOS marketplace, Denki are back with their new word game, Quarrel. Quarrel isn’t your standard take on the genre though, as each player must take control of a tribe and dominate the game board by spelling out the most elaborate or pointworthy words with the tiles provided. Think of it as Scrabble meets Civilization, but with pint sized Vikings and Ninjas tossing letters at eachother. Personally speaking, I haven’t really payed much attention to the whole “word game” genre aside from random casual titles such as Bookworm, but the unique style of gameplay in Quarrel actually has quite a bit of depth hidden under it’s bubbly exterior. Here is my review for Quarrel for the iPad. 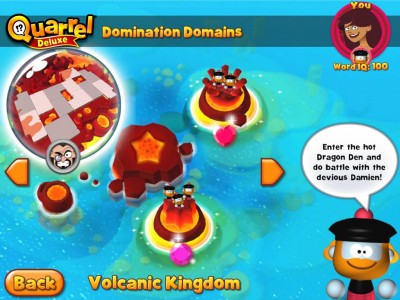 Gameplay
If you have ever played a game of Words With Friends, Scrabble, Literati, or any point-based word game, you should feel right at home with Quarrel as the same formula is found at the heart of the game. Starting out, the player must choose either a male or female avatar and then pick a tribe. These tribes are made out of the likes of ninjas, robots, and a motley variety of other characters that will be the inhabitants of your territories. Once you finish this small amount of customization, you must then pick an island that will be your battleground for domination.

Each island is made up out of colored squares known as territories, with each color belonging to either the human player or one of the computer opponents. This is where the main objective to Quarrel actually comes in though as it is now your duty to defeat each tribe in word battles and take ownership of the entire game board, essentially turning the map all of one color. Up to 8 tribesmen can sit on each square, with each member able to hold one letter in battle. This means if you have just two tribesmen on a square and are challenged by a group of 7 via the opponent, the odds are heavily stacked against you as only a 2 letter word will be able to be made. Thankfully though, each round of turns ends with a reinforcement landing on each square you own (unless the population is maxed out), which provides a bit of relief and disables a solo tribesmen to do battle alone. 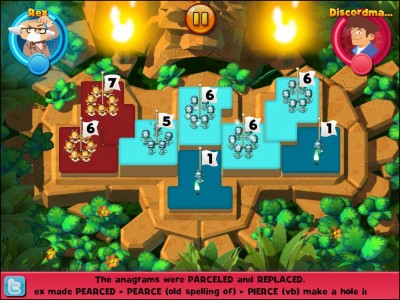 Battles play out just like Scrabble as the point values are identical, but with each player receiving the same 8-letter anagram to craft words out of. Spelling out these words also couldn’t be easier as players just need to tap a letter to watch it automatically be assigned to a waiting tribesmen. Once you conjure up the appropriate word, both sides make their reveals and one winner is decided based on the points received. In the event of a tie or draw, the fastest player takes the territory, so timing is very important no matter how the odds may stack. I had a team of two defeat my team of 8 because I had a bit of a brain jam on my first game, so the sharp and quick AI in Quarrel is sure to keep players on their toes throughout the entire experience.

So what happens to the losing team you may ask? A harsh death by alphabet of course. If by chance you happen to conquer a squad with a greater number than your own, each additional tribesmen will be taken hostage and forced to become a member of your tribe (which also works the same way with the opponent if they were to win the battle). When back on the main map, players can shuffle their tribesmen around to jump to a bordering territory if a spot is available, helping boost their defense if attacked by an enemy. This is where Quarrel shines the most though as this defensive strategy demands you to always be on your guard and to plan wisely before attacking an opposing territory. For example, if an opponent has their guard down, you could literally hop from one square to another, smashing each tribe with large words and chaining out a victory in one swift move. 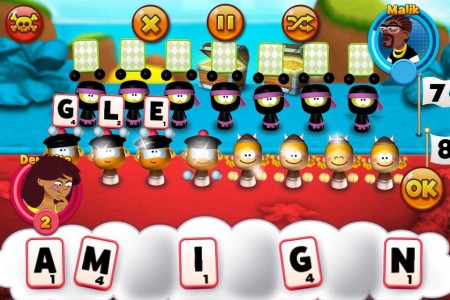 I definitely feel it is also worth mentioning how detailed this title actually is compared to all of the competitors in the same market. Each character you go up against possess their own unique personality as they command their minions. Another small feature that went miles to enhance the game was a news-ticker, which displays full definitions for each word created after every quarrel at the bottom of the screen. I will say I think a bit of replay value could have been added by some type of multiplayer, but the smart AI along with Twitter and Facebook integration (which is used for bragging rights) softened the blow and added in some incentive to jump back in after dominating the little islands in the game.

Graphics/Audio
From the first moment I laid eyes upon Quarrel Deluxe, the sheer quality of the presentation value stuck out like a sore thumb. Of course that is a good thing though, as it is very obvious Denki soaked this title in love with their quirky AI character designs that are all charming and full of personality. The little tribesmen are also well crafted and while their sprites may be somewhat typical, I still felt the need to guide them to victory and protect them due to their small little bodies portraying fear and joy while in battle. With a word game, we could have seen some fairly boring choices used, but thankfully the developers really put their all into making this iOS title a top notch production that is full of eye-pleasing color. 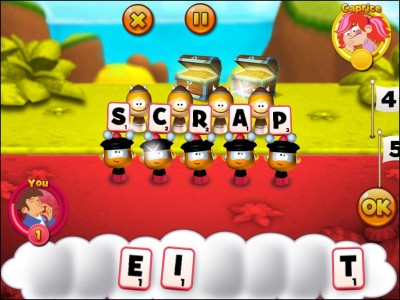 The soundtrack for Quarrel is made up of bubbly beats that fit in perfectly with the bright and colorful graphics. I can’t say there were any tunes that were exactly memorable, but they do get the job done and offer enough reason to keep the volume up for each play period. The rest of the sound on display is just as high quality as the visuals as well as these little tribesmen come to life with little squeals and chipper sound clips, and the minor touches like drum rolls and a ticking time clock are sure to keep players on the edge of their seat while in a pinch to think up a clever word to use for battle.

Overall
Quarrel Deluxe takes a rather stale genre and completely makes it over into a fresh gameplay experience that is just as much fun to look at as it is to play. Casual players will love the simple Scrabble-like formula within, while the more hardcore out there are sure to be captured by the heavy amount of strategy that is needed to claim victory. Multiplayer however is one element that could have took this title even further, but in a rare twist for an iOS title, we were treated to clever AI that actually provides a challenge and keeps the game exciting and hectic down to the last tile played. With a low price-tag and an almost infinite amount of replay value, this Denki delight is sure to be a must own for anyone looking to challenge their lexicon with some tribe-smashing greatness.

I Give Quarrel Deluxe: