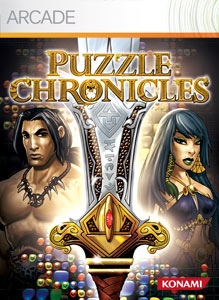 Story
“Enter the dark and savage lands of the Ashurin Empire as you battle to avenge the atrocities the Empire brought upon your tribesmen in Puzzle Chronicles. On your heroic quest to topple the Empire, fight fierce beasts and battle-hardened warriors in this new puzzle/role-playing hybrid game. Featuring an active puzzle combat mechanic, deep story, and robust character development, Puzzle Chronicles brings you into the next era of puzzle RPGs.” [Via Xbox.Com]

The game starts off with your village being ransacked by slavers and everyone in your tribe are sold as slaves. You play a barbarian who has been bought by a sorceress and she helps you in exchange for a simple favor. The favor is unknown in the beginning but all you want is revenge on those that took your village folk.

Gameplay
The game itself is pretty straight forward, go to the question mark to start the quest and then complete the quest. Where this game gets complicated is within the puzzles and how equipment and stats change the way the puzzle combat is played. Every block has a specific name, but they are said once during the tutorial and after that you will pretty much just refer to them as: “The star piece”, “skull piece”, and “normal piece”. Destroy skull pieces to collect rage, and collect 5 to attack. The actual concept is pretty complicated to explain, but easy enough to pick up and play once you see it for yourself.

Puzzle Chronicles puzzles are horizontal rather than vertical, and to anyone who has played other puzzle combat games this will come across as odd at first but you will quickly get used to it. Armor, weapons, and warbeasts continue to change the way the puzzles are played. All of your skills and items are kept with your character between online play and and story mode. The persistent hero enables you to get closer to your character as you continually play with him.

There are few small nuisances within the game however. The first and most annoying has to be the walking. When you go from one location to the next you must watch your character walk there, and it takes awhile. There is also no way to alter your course half way through, so if you make a mistake you must sit there and watch your character walk before you can pick somewhere else to go. The second nuisance is the slow pace of the game. Outside of the puzzles the game itself takes a while to get moving, and the developers try so hard to make it feel like a RPG that a lot of the quests are trivial and require a lot of reading that doesn’t actually develop the story at all.

Graphics
The Graphics in Puzzle Chronicles are nothing amazing. Cutscenes comprise of comic book like sequences. Areas are also plain, with a few buildings that you can go between to do quests, fight monsters, train your beast, shop, craft stuff, or play minigames. Although the game isn’t very appealing to the eyes, I found myself enjoying the character models. Though they aren’t top notch they aren’t that bad, though it depends on your point of view. I for one got used to the graphics as I played, my brother on the other hand only hated them more as he progressed. It wouldn’t have been that bad if all the art would have followed a general pattern, but it seemed as if 3 different artists created the game. The cutscenes, levels, and character models were all different and this caused a clash in the art. The clash, from a psychological stand point, could unsettle many players and interrupt your enjoyment of the game. 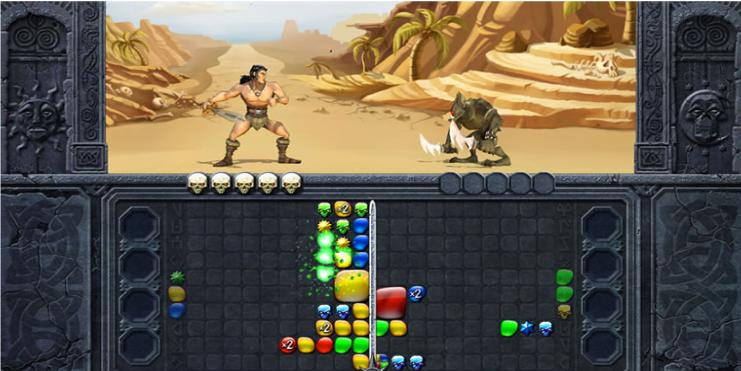 Achievements
A huge chunk of the achievements are story related or level related. The only two achievements that may take time are the “Conquering Hero” and “Deathbringer” achievements. “Conquering Hero” can be boosted online with a friend by having one of you quit 15 times, it counts as a win for the person who didn’t quit. The “Deathbringer” on the other hand could take time, especially since there is no in game list of awards and could be pretty much anything. If you are good at puzzle games, the full 200 shouldn’t be a big problem.

I give Puzzle Chronicles 7.5 Capsules out of 10.