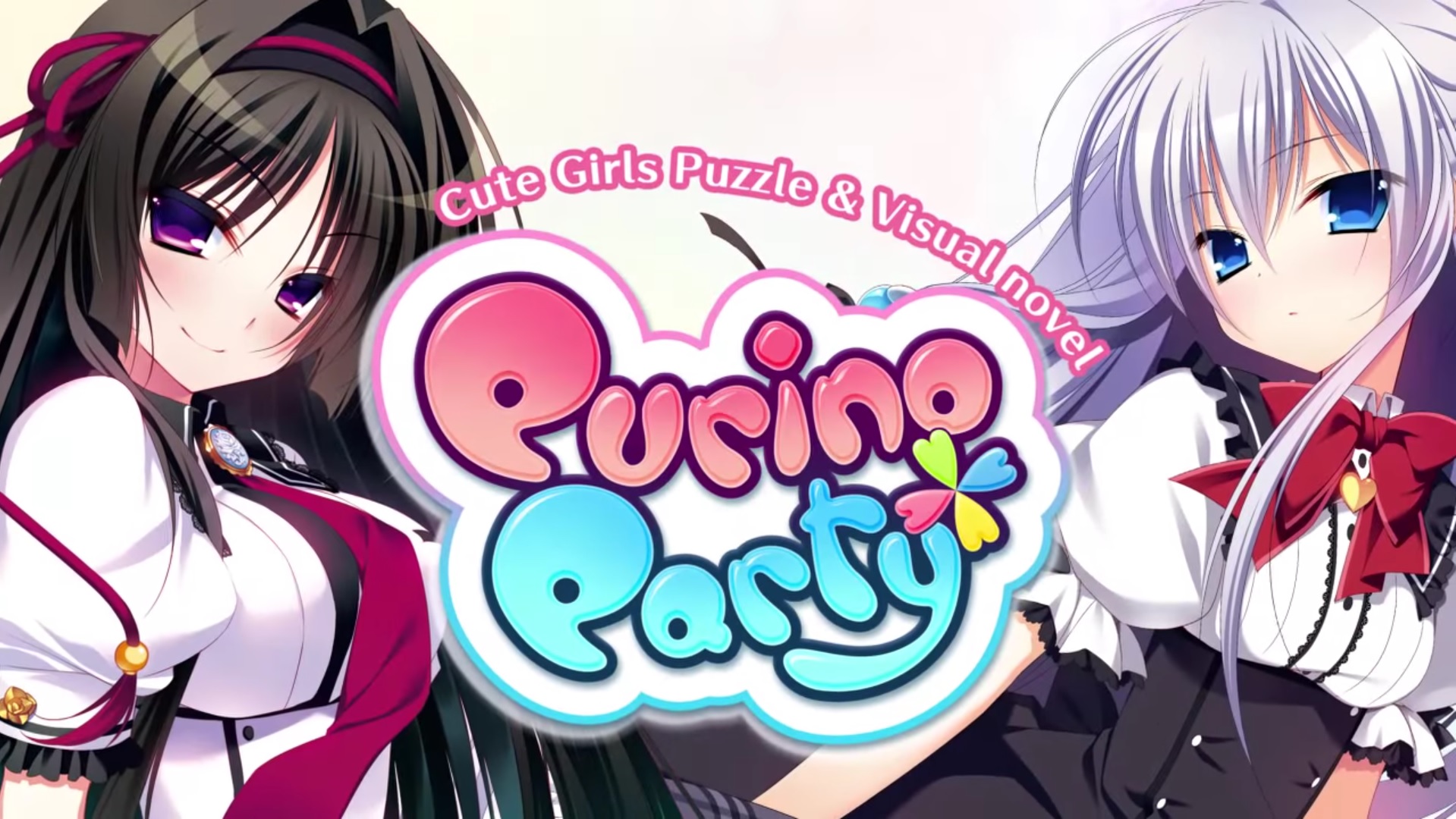 While many of the visual novels that are released in English today are simply text based games that players read through and make choices, there have been many that involve everything from strategy-RPG battles, formation battles, and even those that involve puzzle solving. Frontwing, best known for their Grisaia series, has decided to dabble a bit with the latter category by releasing a tile matching game called Purino Party.  With this being the company’s first attempt at releasing their own English game in the West, is it worth your time?

Upon arriving at a town to do some sightseeing, the player (who is never given a name) is shocked to see a number of un-named girls flock to him. It isn’t long before he is approached by Kei Atorizuka who informs him that this town and its residents all admire those who excel at puzzle gaming above all else. In fact, those who are so skilled at solving puzzles can even gather together a harem of girls with little trouble. 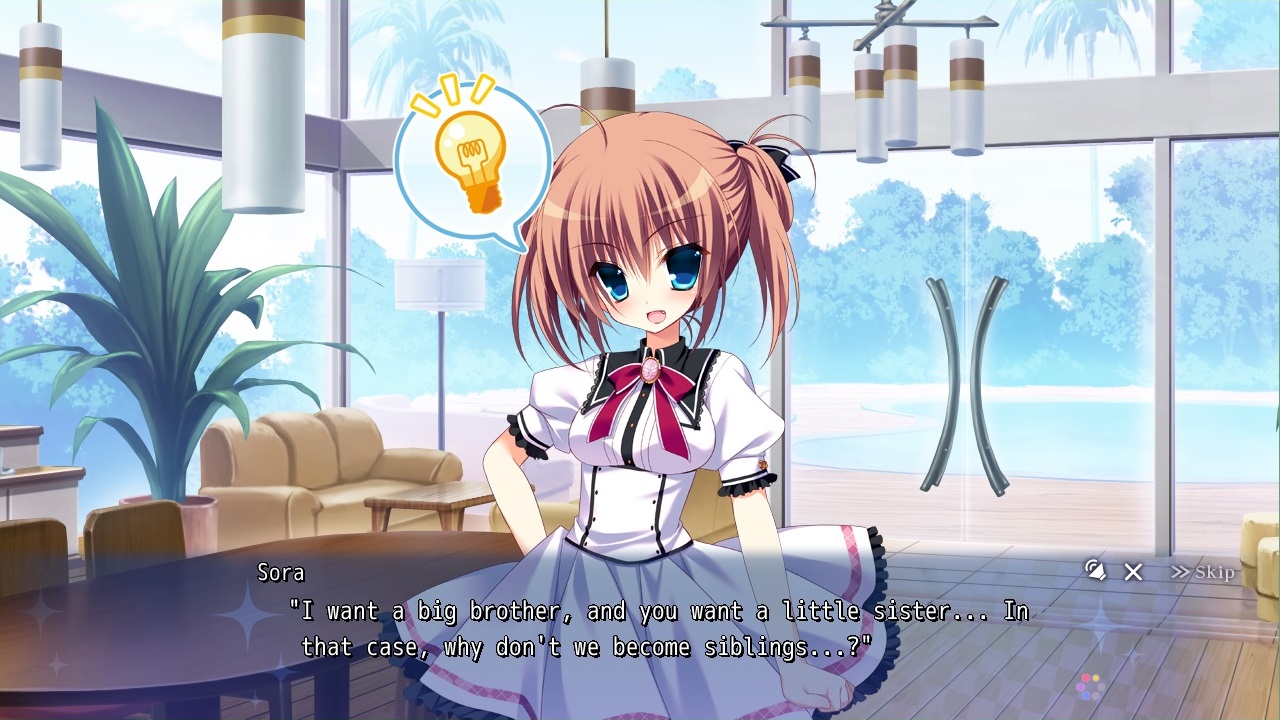 Kei then invites the player to stay at the ‘Dream House’ dorm where a number of girls are currently staying in an effort to researching their favorite hobbies. She states that these girls are all working hard to shine like diamonds and that with your help, they might be able to reach their full potential and the best way to do that is to interact with each of them through story events.

After this brief introduction players will then be able to choose from the four girls in the house and then every time they complete a puzzle they will advance to the next story stage with said girl. Unfortunately while the four girls that players are introduced to at the start all have their own charms, the story is less than praiseworthy. I say this because while each girl is given five different story events, the choices players make during these events have no role in actually affecting how things will play out nor are any of these girls’ stories developed in any real manner. 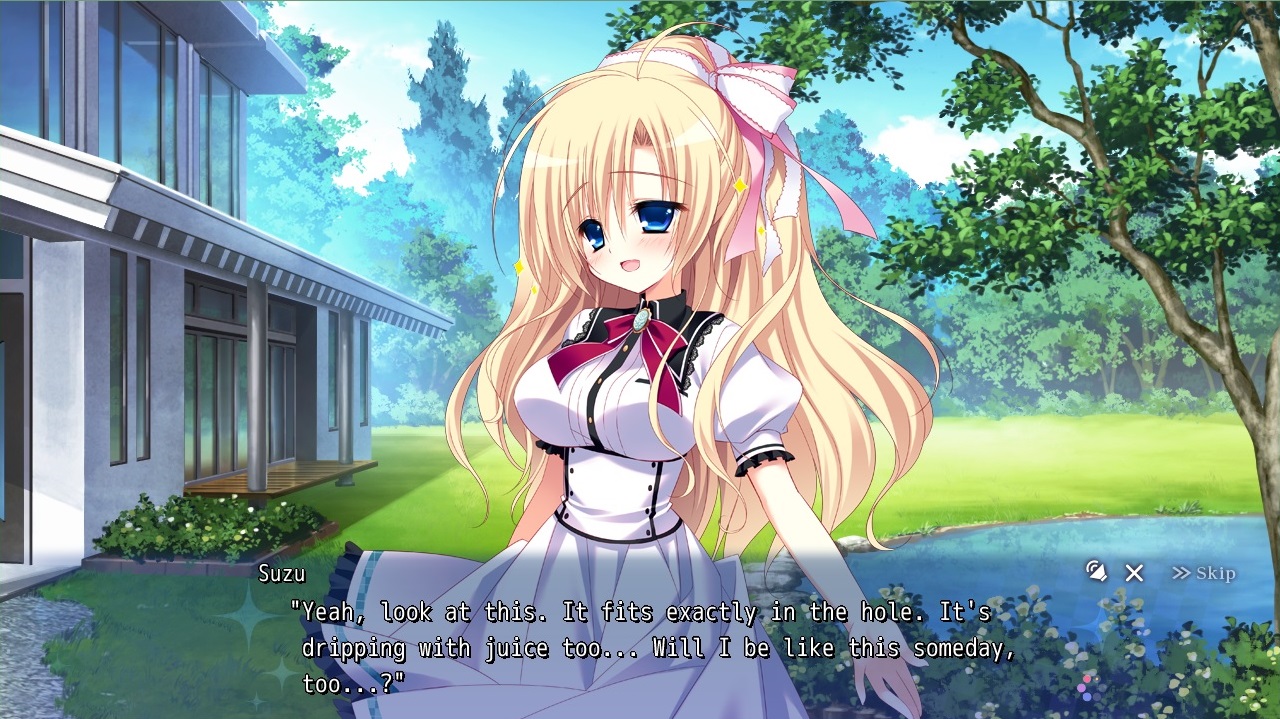 Of course, once you complete the first house players will move into ‘Dream Manor’ where four more girls are staying, only this time around they are different kinds of artists who are attempting to reach their dreams. The girls this time around are a bit more down to earth which is a bit odd considering they are artists but thankfully this does allow for the characters to develop in a better manner. 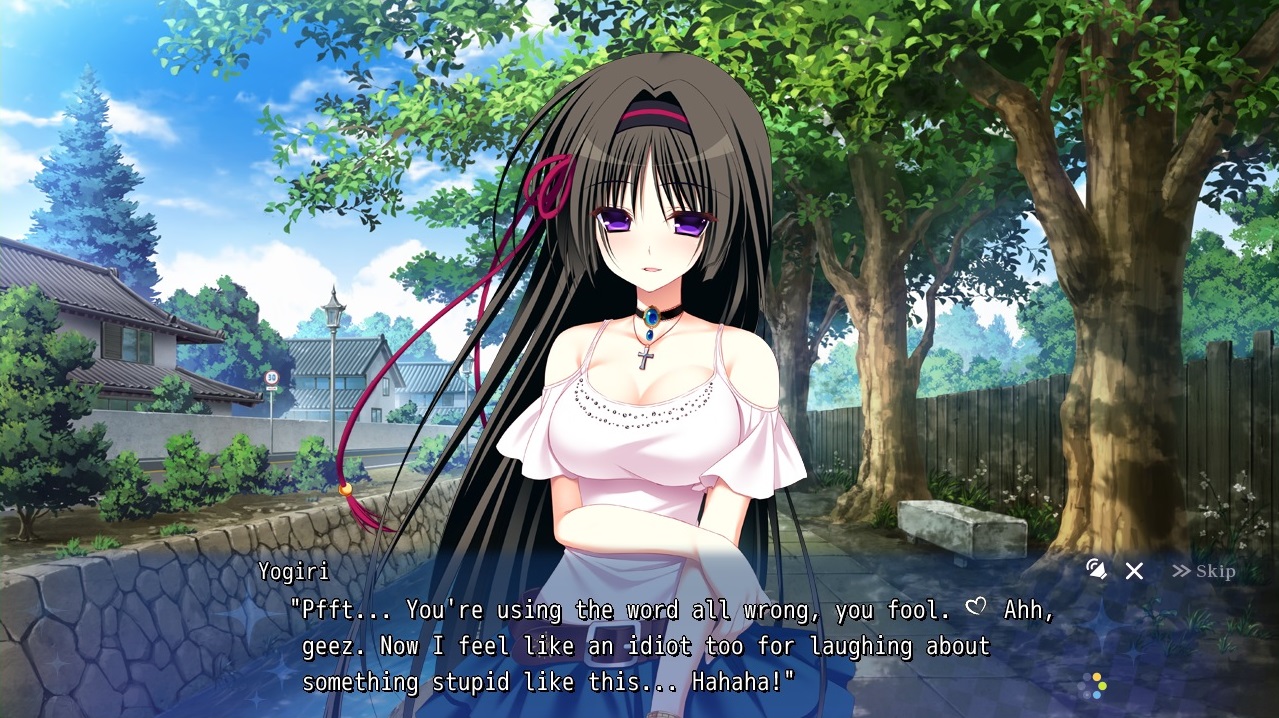 You see, one such girl is working hard to become a singer, another is a lackadaisical painter who spends her time bathing or eating gummies, while another is a writer of “sensual” novels who happens to be in a rut, and the final girl is an artist with a horrifying style trying to become better.

The second half of the game delivers more realized character interactions and a feeling of progression in some of the girls’ storylines but there is one problem that persists throughout the entire game and it is mostly the fact that while all of the storyline content in the game and these girls’ personalities have been crafted from scratch, they are all taken from two of Frontwing’s past games. 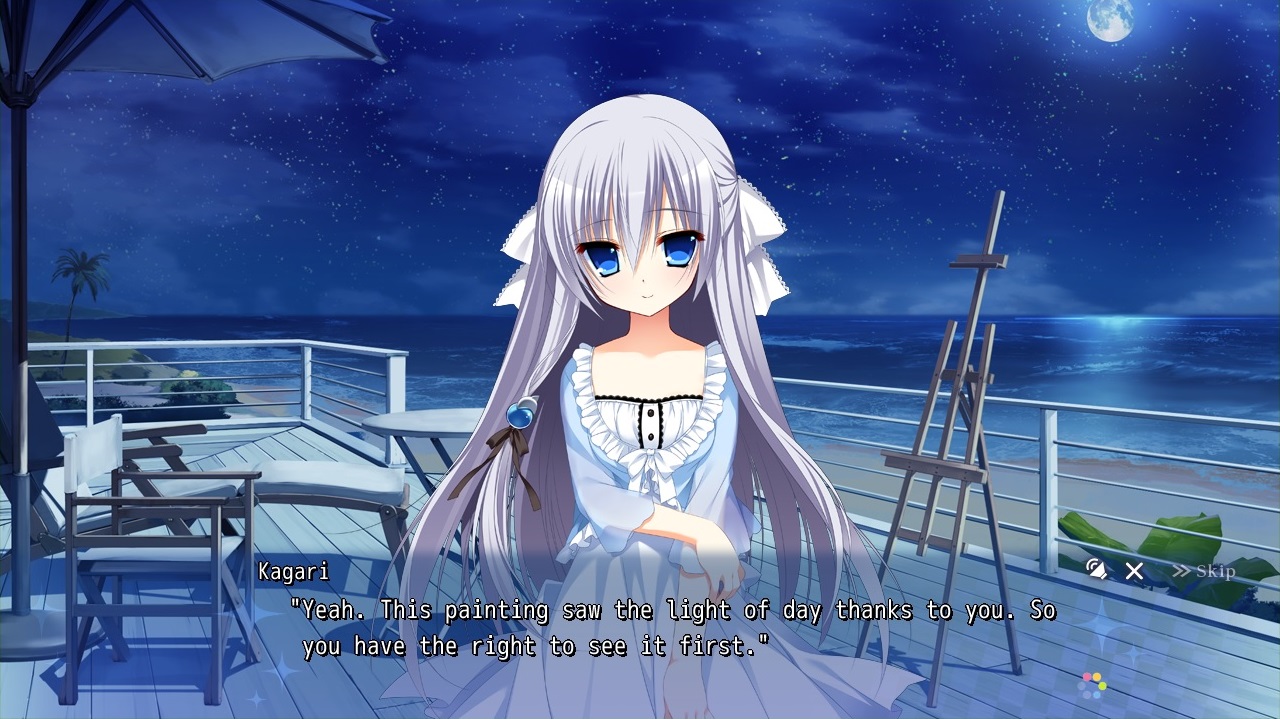 This means that some of the discussions simply revolve around an eventual CG that players will unlock after a story event and while I will admit that Frontwing’s writers have managed to write Purino Party’s interactions in a manner that don’t seem too out of place given this circumstance, it feels like there could have been a lot more on offer here for these girls as well as a more satisfying conclusion to some of their individual stories if they had been handled separately.

Once you are past the initial introduction to the game players will be presented with a selection page featuring the four girls that they can select between at any given time. These girls all have five hearts under their names and this represents how far along in their storylines you currently are. When selecting one of the girls you will immediately be taken to the puzzle screen where a match panel game must be played before the actual story will continue. 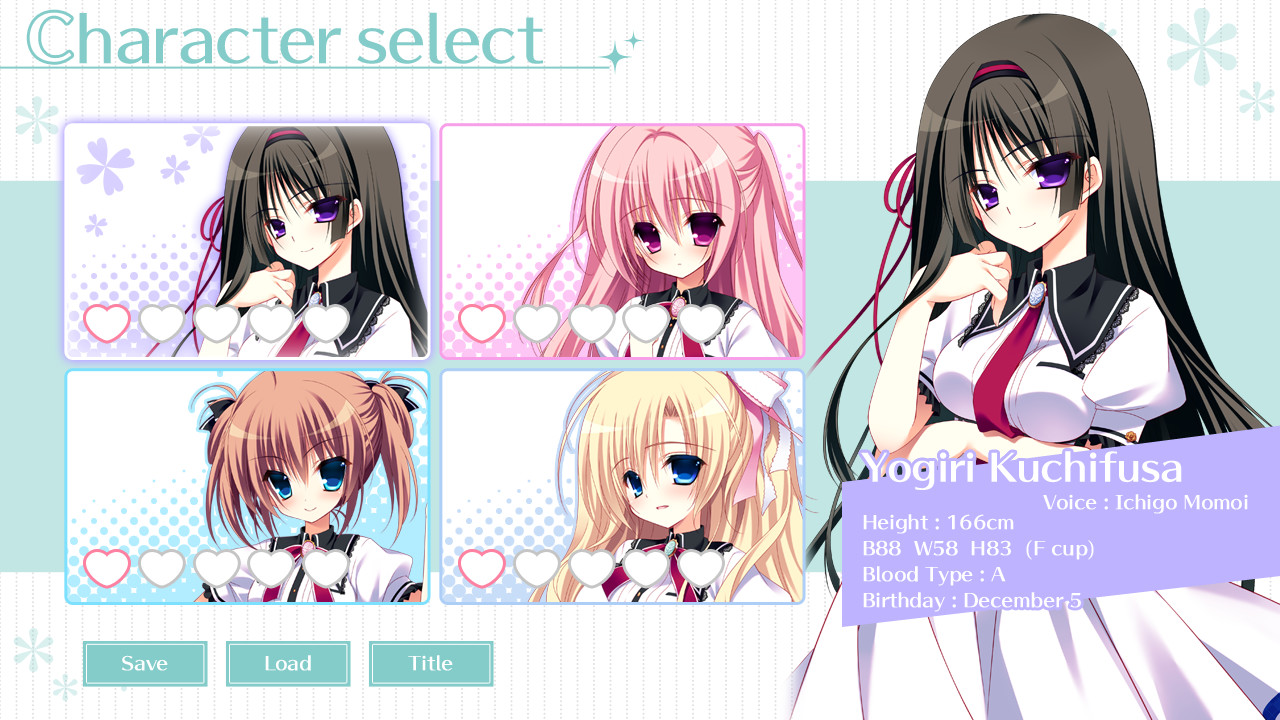 Now, while the game has since been patched to give a better description of the game mechanics, Purino Party is a bit different from your standard match 3 panel game but can easily be mistaken as a standard match game. Instead of simply being able to move a panel up or down or only one space at a time or focusing on only altering the board slightly with each move this game puts a twist on things by allowing players to move any piece they want all around the board. This means that the best way to earn points is to grab one of the four colored blocks and then slide it around in a manner that will allow other blocks to create three or more lined matches before dropping your block where you want to.

There are a few caveats to this method of matching however as players are only given a limited amount of time to hold onto a piece and any time you pick a piece, even by accident, it counts as a turn. The main challenge in Purino Party comes from the fact that players are tasked with reaching a certain point threshold with a small number of turns and, in later stages, a time limit that can be as small as seven seconds to choose what action to take next. This is alleviated a bit by the ability to match clock icons to earn both points and refill the timer as well as hearts that generate a “Fever” mode that doubles the points of all matches in one turn. 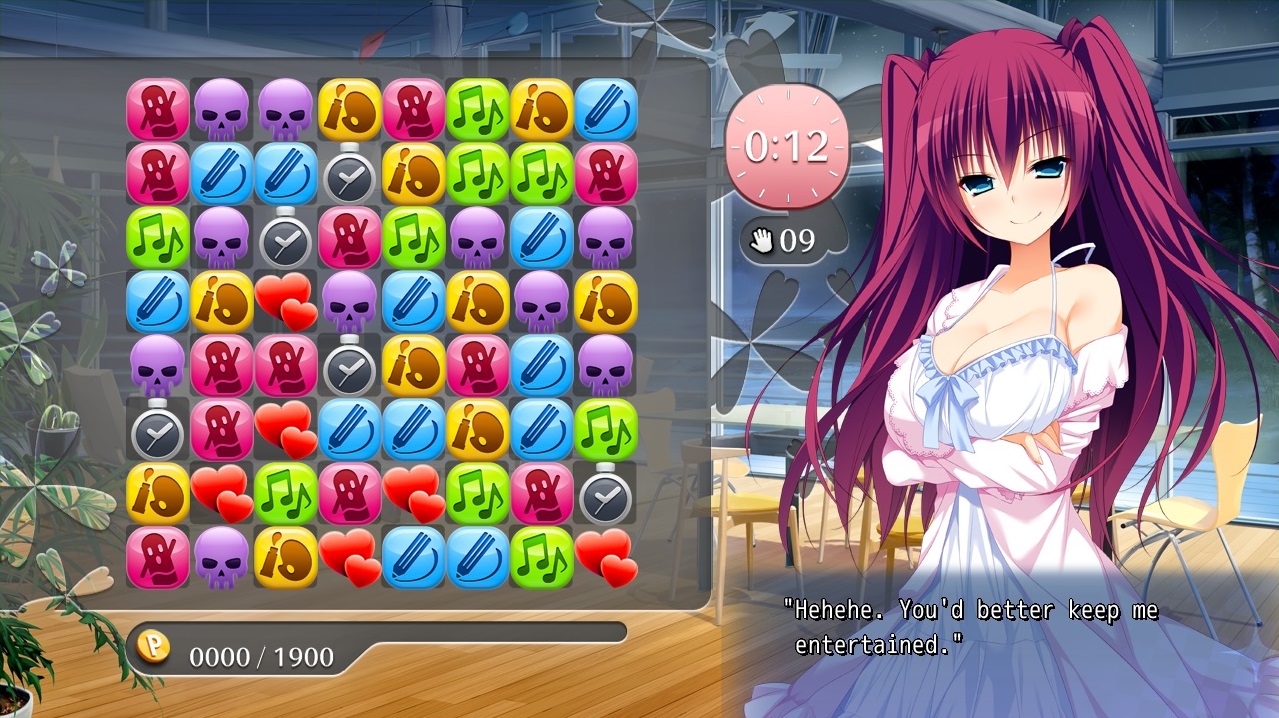 Unfortunately a lot of a player’s success in Purino Party is determined from the board that you are given at the start of the round. While correct dialogue choices in the story segments do make some puzzles easier, later levels are often nearly impossible without luck or opting to lower the game’s difficulty. This is due to the fact that even large matches with a girl’s preferred block generally generate a small number of points and the fact that skulls, that when matched remove a turn, are extremely prominent to the point you may end up getting unlucky enough to have skulls drop and match immediately and with no way to earn additional moves, this can put a quick end to a round.

This isn’t too much of an issue if you prefer a challenge but it can be rather frustrating. That being said, it also doesn’t hinder the player from continuing the story in any form as every time the difficulty is lowered the required points to clear a stage becomes smaller, meaning that if you simply want to see what will happen next without banging your head against a difficult puzzle it is possible to do so. 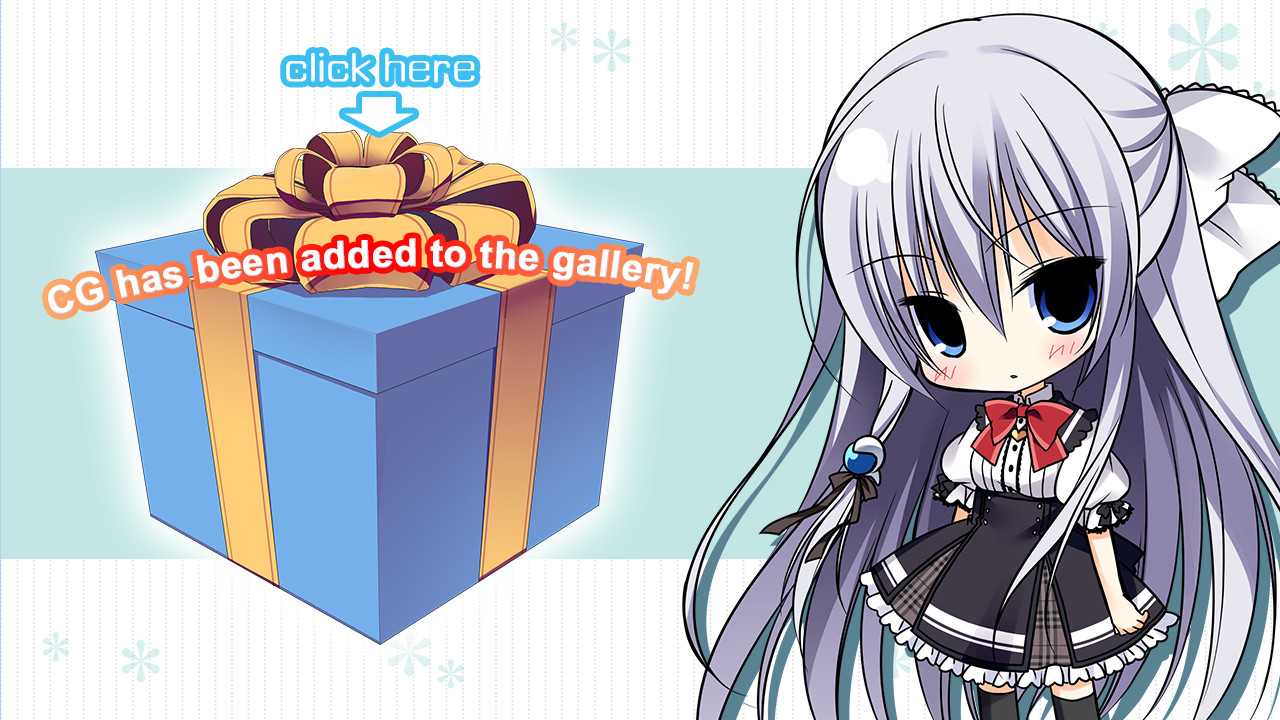 It is unfortunate however that outside of completing the stages and listening to each girls’ story, there really are no other mechanics in Purino Party to speak of. Once you complete the game you can view all unlocked CGs in a gallery or retrying the game to see if you can manage without lowering the difficulty.

As mentioned earlier, those who are familiar or decide to look into Frontwing’s past works will recognize that Purino Party takes girls from 2012’s Pure Girl and 2014’s Innocent Girl. This fact isn’t really hidden from players though as, in the CG gallery, the girls from each dorm are separated into Teams from both titles. This does mean however that, as mentioned before, the various interactions are designed to lead players to a beach, discuss a cosplay outfit, or some other interaction that is then displayed in the form of a CG from these original games. 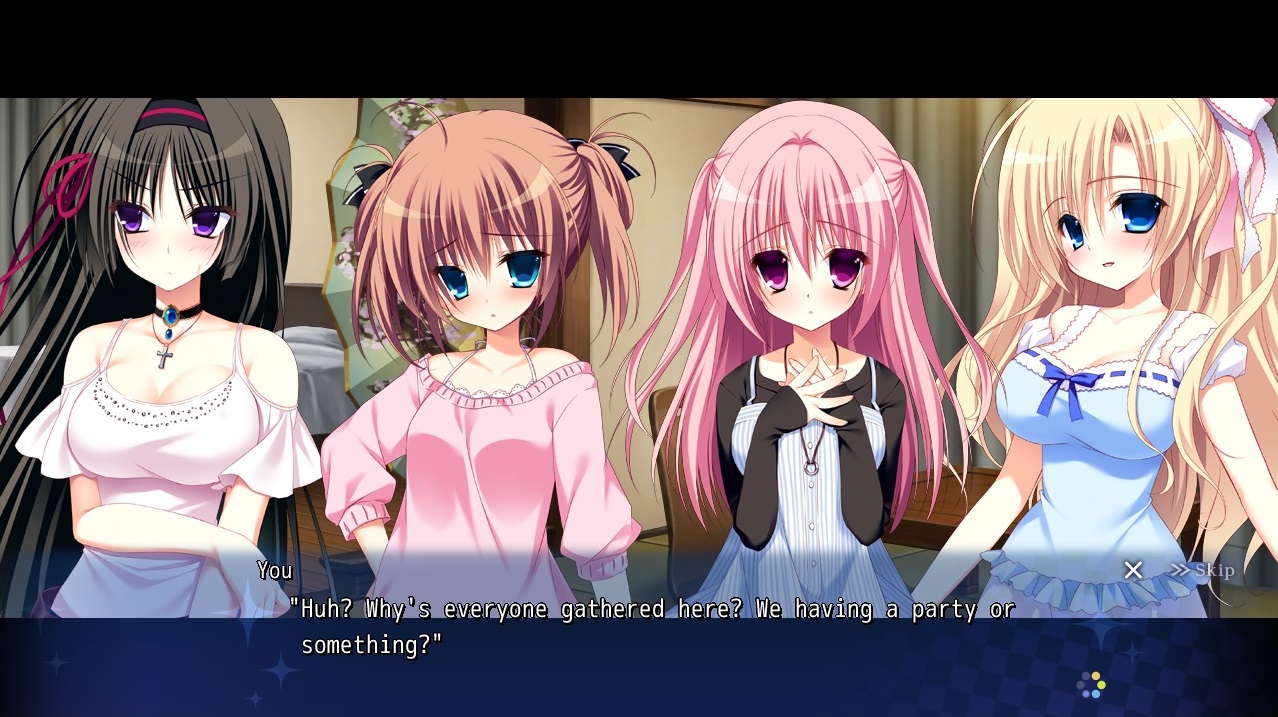 The artwork is still incredible well handled in this game despite being pulled from earlier titles as Frontwing’s artists prove to be fairly timeless with their designs. The characters are portrayed in an incredibly cute manner with a variety of facial expressions and poses as they react to the discussions that are being held and the CGs are nicely drawn. It is worth noting that with the free 18+ patch implemented that many of these CGs are pulled back out a bit from their original zoomed-in presentation allowing players a full look at the CGs as they were meant to be portrayed, including a few sex scenes though it is worth noting that any sex scenes do have mosaics placed over the characters’ genitals. 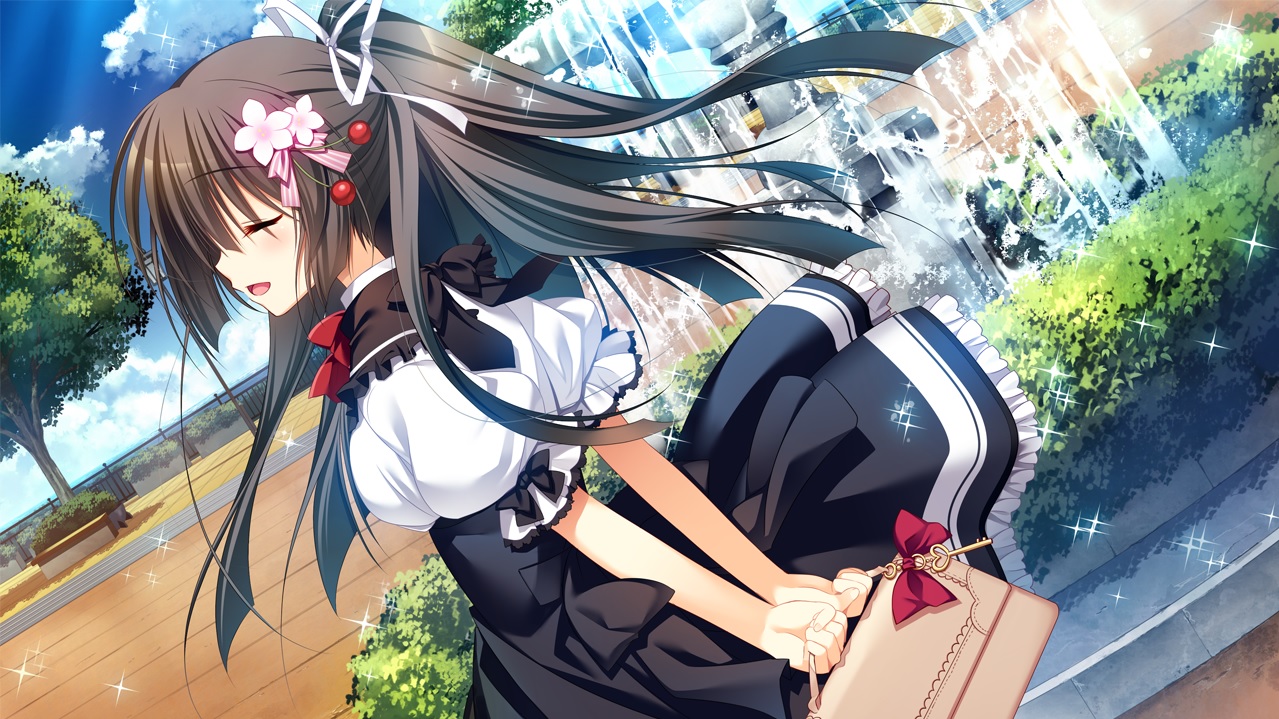 Although the CGs and character art may be taken from earlier titles, Purnio Party’s voice work has been recorded to completely fit the story that is being told in the game and the girls are all voiced extremely well here, though it is worth noting that their constant cheering during the puzzle game can be a little bit annoying at times as a few characters only have one or two pieces of dialogue in this mode that they will shout out repeatedly.

Purino Party brings something a bit different to the tile-matching puzzle genre by allowing players the option to slide pieces around freely but other than that it doesn’t really offer much variety. The storyline with each of the girls is fairly interesting but thanks to the linear nature and limited style of the game,  only a few of their individual storylines develop in any meaningful manner. This means that while the artwork might be a big bonus for fans of Frontwing’s style, Purino Party results in only being a serviceable puzzle game with fun characters that never realize their potential.

Purino Party is a bit different than your standard tile matching game and brings with it some signature artwork from Frontwing but doesn’t offer much beyond that.
5.5