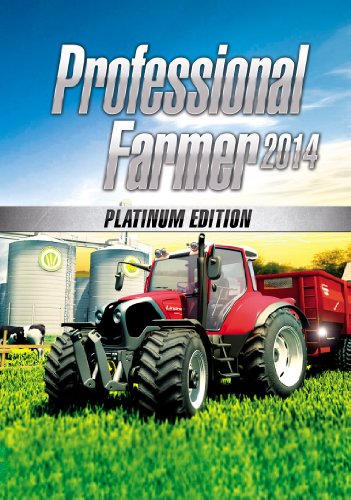 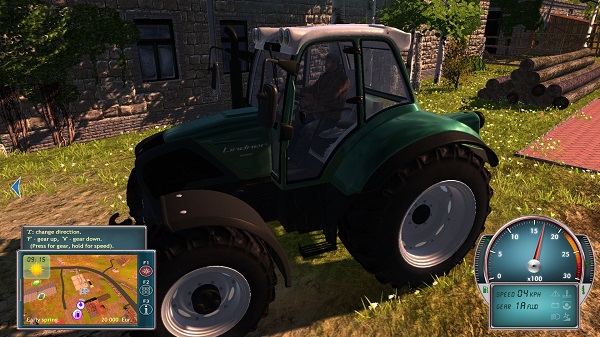 Professional Farmer 2014, developed by Playwar S.A. and published by United Independent Entertainment GmbH, is a game firmly in the vein of the ‘European Simulator’ style of the simulation genre. This means that in these kinds of games the developers aimed to create as much of direct replication of the experience of a particular profession, with less focus on the ludological aspects of game design (the ‘gamey’ parts of a game). These types of games are especially intriguing to those with an interest in game design as, when done well, they provide a strong example of how pretty much any aspect of life can be made fun through minimalistic but efficient application of game mechanics. I imagined the game as a bit like a more hardcore version of the Harvest Moon series, and with this in mind I doffed my cap and pulled on boots to trudge with an open mind into the open fields of the latest iteration of the Professional Farmer series.

This game’s narrative is the soul of brevity. You are a farmer trying to eke out a living in either the American or French countryside. That is it. Nothing more nothing less. This is a simulator of farming and you should expect nothing more or less. Following the mediocre tutorial at the start of career mode,which didn’t teach me about such things as how the heck I’m meant to use the manure that my animals produce (my farmstead is literally being overrun with bull$%^&), you’re thrust directly into the brunt of the gameplay: farming. 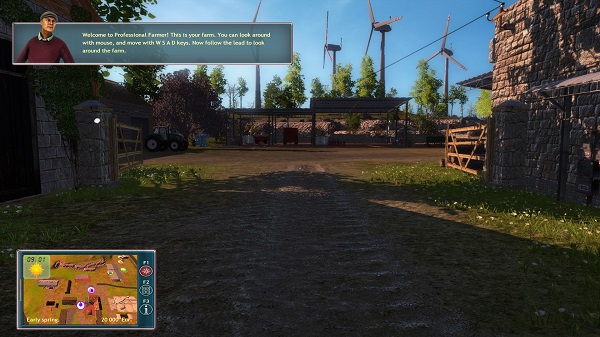 This is an area in which I found the game to be sorely lacking. The lack of an overarching narrative in game never bothered me before and I’m fine with drawing my magic circle around any game that I play (to seperate the world of the game entirely from the reality I occupy), but the world of Pro Farmer feels completely static and immobile. There are no rivals to compete against, no random occurrences which might force the player to make decisions, or even any obstacles for the player to overcome beyond a bank loan and the occasional pest invading your fields.

As mentioned above, you play this game as the eponymous farmer. You start with a farmstead with cows, chickens, and a couple of fields. The gameplay of Pro Farmer largely focuses on the business of farming (surprise, surprise). The farming tools are all mechanised, so most farming activities like plowing and planting require you to get into your tractor, attach various farm implements, and then drive across a field. This is largely what the game boils down to: driving over a field repeatedly. Most of the time, this is brain-numbingly boring with little player input and at others it is just plain annoying as your vehicle can list to one side or the other if the field is on the side of hill. Nothing annoys my obsessive-compulsive desires more than having my attempts to plow in nice, straight lines repeatedly foiled because my tractor keeps sliding down the hillside. I originally assumed that this listing might have been resistance which was caused by the plow, but having obtained a field on flat terrain and testing out this hypothesis; I have discovered that this is not the case. 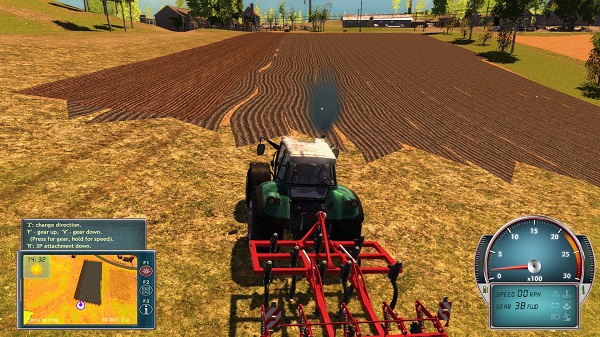 Outside of caring for these fields, there doesn’t appear to be all that much that you can actively do in the game. You can buy animals such as hens and cows which produce eggs, milk, and the aforementioned manure. This all done automatically, however, without any input from the player other than deciding when to buy and sell individual animals. This does provide some small level of management alongside buying other essentials such as seed, fertilizer, and fuel but ultimately there isn’t all that much that you can exert yourself in.

Ultimately, the game only allows you to work the fields as the only activity where you can actually have some manner of greater control and exert effort. I resigned myself to this notion and after slaving away for a whole game year and stockpiling my harvests, I was dismayed to find that my work earned me a pittance. Perhaps this was meant to be thoughtful commentary on the state of affairs for modern day farmers or I might just be a terrible business man. All I know for certain is that in two hours of gameplay and working 3 fields, I had earned about 10 000 euros. This figure did not include the money I would have spent on seed, fuel, and fertilizer, and would not have put much of a dent into the sizeable 250 000 euro loan which I was working to pay off. I would liken this experience to paying off the loan to Tom Nook in Animal Crossing but with less cartoon animal loan skarks and more spreadsheets. 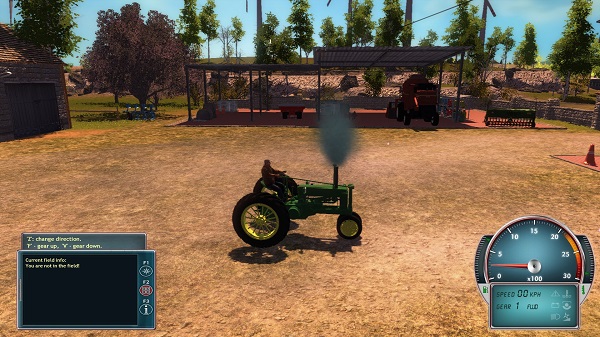 There is DLC in the platinum edition which includes the opportunity to ride around on older tractors from the history of farming, with models from the turn of the century. These vehicles are accurate to their real-world counterpart and are much slower than your default vehicle, so I doubt many players would actually use them as anything other than historical ornaments. There is also an American map added in, which other than visual differences, does not play all that differently from what I’ve seen of the standard French map. 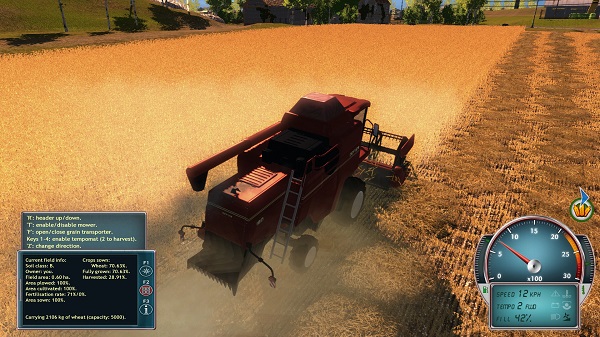 The graphics in this game are nothing to write home about. The interior of each vehicle has been lovingly recreated for each vehicle and can be seen in the first-person view, but it is not practical for the player to play the game from this view for too long and so you’ll probably end up using your camera in a third-person view. Trees, shrubs, and crops are rendered with 2 or more intersecting, 2D images. I found this to be an unusual choice for the game as this produces an effect which is nice at a distance but ugly up close. I imagine that rendering each individual stalk of wheat would have been taxing on most systems, so I understand why the developers made this decision. There are still some nice visuals to be experience such as the waves of gold of fully grown wheat, as long as you don’t zoom in too close to the field. Textures for buildings and people were similarly roughshod with my farmstead clearly being located somewhere in the uncanny valley region of France. 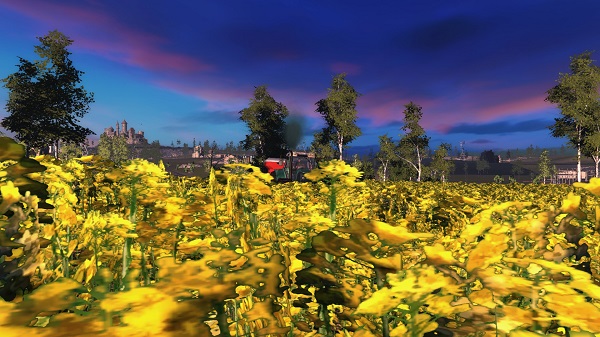 The game’s sound design is largely mediocre. The sound effects for all the farm vehicles are all present and working. The music does get a bit annoying due to the limited soundtrack and the somewhat uninspired score which sounded like it was lifted off of the Sims 2. For some reason, the music turns itself off when you leave your vehicle which I guess might be a subtle way of telling the player that this game is played from the behind the wheel of a virtual tractor… or possibly a glitch. What disturbed me was the lack of sound emanating from the farmyard animals when I was near their pens and cages. Occasionally I’d hear a cluck or a moo but from my experience on farms I know that animals are not normally this quiet. I rationalized this phenomenon as the outcome of years of behavioural conditioning which causes the animals to become silent with fear whenever I approached. 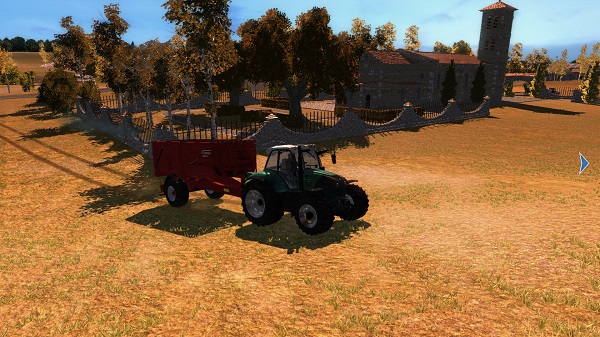 Ultimately, the game design is what irked me the most in this title as I was so limited in input into the game world. There is so little to do and so little variance in the actions that you do have available, which ultimately made this game feel more like a chore and less like a retreat into pastoral bliss. There is so much more which could have been added to this game to increase player interactivity.  The easiest way I could think of off the top of my head is to give players more choices in shaping their farm. For example; players could be given the choice about whether or not practice factory farming with their livestock, or whether to use genetically modified crops in their fields. These are both controversial topics, to be certain, but they are choices which are made by actual farmers in the real world, today. By giving players choices such as these, they could have made a more accurate simulation and also can give players a sense of agency which, unfortunately, this game is sorely lacking.

I admit that the simplicity and the grind can probably appeal to some players and from what I’ve read, micromanaging the small details which the game does give you can apparently turn out to be quite profitable but considering there is so little that you can actually spend this money on, I doubt I would feel much accomplishment or joy. There is still some small fun to be had in this grind which I experienced when I harvested my fields of grain the first time, but there isn’t all that much which can actually hold my attention to get me to play long enough to capitalise on this investment. This title runs smoothly and does have some nice visuals to experience here and there but ultimately, the devs need to put more effort into the game design itself as right now Professional Farmer 2014 is more simulation than game.