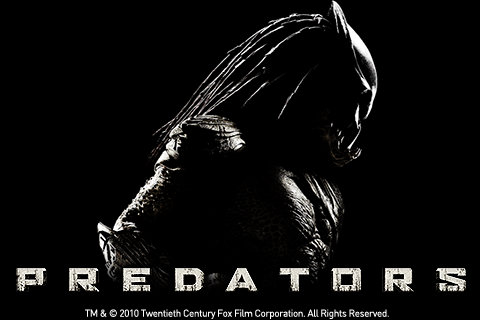 In conjunction with the release of the film of the same name, a Predators movie tie-in game has been released on iPhone by the same team who developed the fantastic ‘Guerrilla BOB’, Angry Mob Games. With the poor reputation of movie tie-ins, I was a little sceptical at first although the fact that such a decent studio was working on it was promising. This, along with being initially greeted by a 30-minute download time for Robert Rodriguez presents PREDATORS, had me unsure what to expect. The collossal 100-plus MB download is an absolute behemoth, especially so when contrasted with the size of other games available on the format. I thought that I could have a fully fledged game on my hands with an in-depth campaign mode, a rarity on the iPhone/iPod Touch with all the mini-game based titles available. 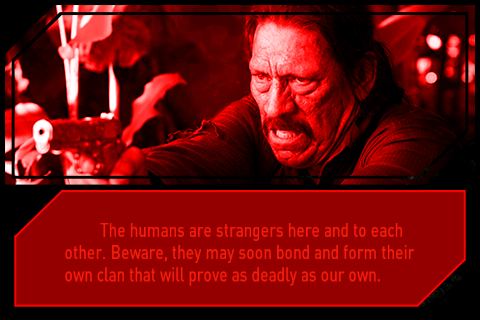 The size made it look to be a very ambitious title, and upon booting it up, I found it to be exactly that. Visually, it was highly impressive, with some of the best graphics that can be seen an iPhone game. The characters models are in full 3D and, although there are only a limited range of enemies, graphically they are sound and very ambitious for such a small device. I was also impressed by the level graphics and design initially, but only initially, because as I progressed I realised that the same level is used again and again, with the only change being changes in lighting to reflect nightfall, as well as a change in weather conditions. The repeated use of one level design, along with the use of a limited selection of enemy types, can lead to the game feeling slightly repetitive. This is even further supported by the generic “hack ‘n’ slash” nature of the gameplay, which is tedious and does not utilise the features of the iPhone. The touch features are only used for pressing onscreen buttons with one hand, and guiding an onscreen control stick with the other, which means you can’t help but think that the game isn’t particularly suited to the iPhone and may as well just be on a controller if you are just using buttons and a control stick reminiscent of a control pad. 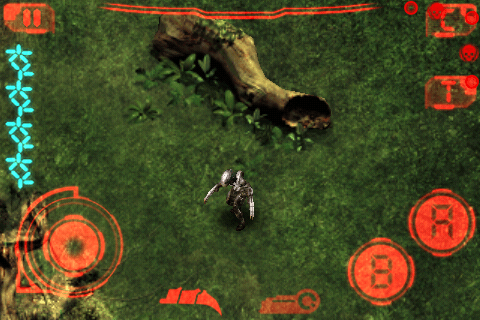 The campaign is lengthy, with self-explanatory missions that almost feel like tutorials in the way they introduce you a new combo or weapon, while still allowing you freedom to roam without feeling like you are following step by step instuctions. The game is actually played through the eyes of a Predator as you hunt down humans, and is well stylised to reflect this through the design and layout of the HUD. As a consequence of being the Predator, the game is very blood-thirsty and violent, and some may enjoy this gore, while others may find it a bit excessive. It’s a matter of personal opinion, although you should really know what to expect from this game based on the nature of the film. However, there is in fact the thoughtful inclusion of the ability to switch blood off via the options menu, a choice which some of you may appreciate.

As aforementioned, the game can get quite tedious due to the “hack ‘n’ slash style and the lact of unique levels and enemies. To freshen things up, there are a number of abilities you learn as you progress, like new combos, infra-red vision and a cloaking ability. The arsenal of weapons you earn and upgrade as you make headway in PREDATORS also helps in keeping the game interesting, as without the injection of this new material, you would grow fatigued by all the repetition. The nature of the game also makes it very difficult. Some will embrace this challenge, and respect the level of difficulty offered, although a lot of this comes from the combat system. You may accidently get dragged into a combo you didn’t mean to do which could leave you a sitting duck to enemy attacks (such as a “trophy kill”), something common in most button mashers. This one fatal error leaves you with only one option; “retry”, losing all your progress made in that mission, meaning you have to excruciating have to trawl through it again, a feature that many will find frustrating. 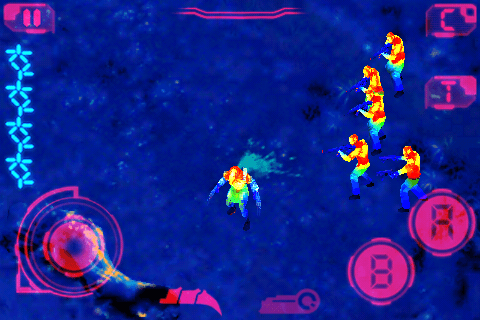 Overall,  “Robert Rodriguez presents PREDATORS™” is an ambitious effort for an iPhone game, with highly impressive graphics, and a lengthy single-player campaign, with four save slots on offer, meaning several people can create datas, or one person can have multiple datas. There are a number of combos and weapons to use in an authentic playthrough from the eyes of the villian. Unfortunately, it suffers from the same problem that most hack ‘n’ slash action/adventure games suffer from; button mashing gets very tedious. Due to this fact, it also doesn’t capitalise on the iPhone’s features, with only buttons and a control stick projected on the screen, rather than something truly innovative. There is also a limited range of character models for enemies and level backdrops which add to feelings of repetition. In summary, for the first 30-40 minutes it is highly enjoyable and a top notch game, but there isn’t enough variation to grab your interest after this time, and as a result, gets boring very quickly.