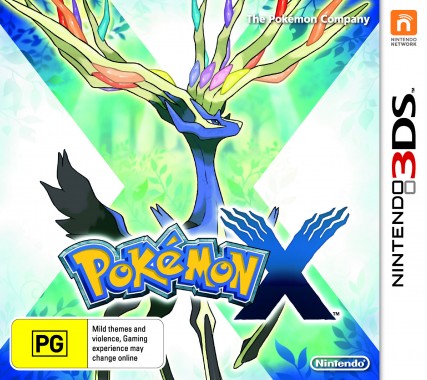 Pokemon is a franchise that has been in the hearts of men, women and childeren for a very long time at this point. Those who were fans as kids are most likely fans as young adults now and throughout the years in between. It is safe to say that Pokemon X and Pokemon Y have been the most anticipated games within the lifespan of Pokemon itself and that anticipation, alongside the hype of it all, is well deserved. It seems as though the team over at Game Freak has put their blood, sweat and tears into this game and it is noticeable beyond all belief. I have been given the pleasure of reviewing Pokemon X and I could not be happier with the way it has turned out. Don’t stop reading here though, continue on as I take you through, possibly, the biggest Pokemon release of all time. 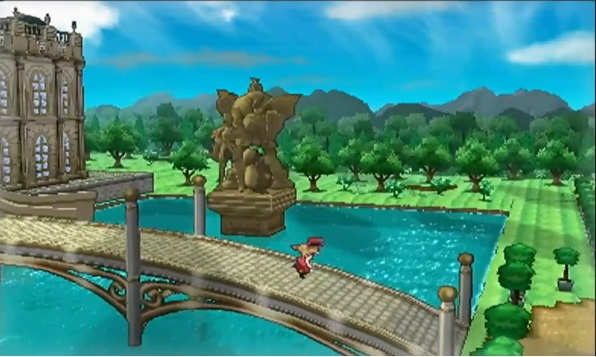 Pokemon X’s story is that of a typical Pokemon story and if you’ve grown tired of playing through a typical Pokemon story than the game just isn’t for you because Pokemon has had this type of story layout since the very beginning and to that I say; “Why fix what isn’t broken?”, because it is the truest form of adventure and that is basically all the story anyone needs to depart on a journey like this. Once again you start off as a young trainer living with your mother, this time around your mum was an award-winning Ryhorn racer which is great because I’m sure a lot of us got tired of having a “generic mum”.Something else that has changed is the fact that you now have four friends to share your adventure with and while their personalities aren’t much to think twice about they don’t exactly have to be and while a lot of people will complain that these characters are 2-Dimensional and annoying you must remember that Pokemon’s target audience is still a younger crowd.

Now I won’t go into detail about the aspects of Pokemon story that you will all already be aware of because, let’s be honest, if you’re reading this right now you are a fan of Pokemon who just can’t get enough of it. Mega Evolutions are now just as crucial to the story as they are to the gameplay. Gym leaders and “Poke-freaks” enjoy a bit of Mega Pokemon chatter and as the main character in your own adventure it is obvious that you will come into contact with a lot of story-driven characters wielding or offering Mega Evolutions which is great because, really, Mega Evolutions are fairly hard to come by unless you’re away of both the location of the Pokemon species and it’s Mega Stone, the game gives you a couple nice Mega Evolving Pokemon that you can use within your team as you journey on and search for more, they don’t leave you in the dark, they light your way through it. 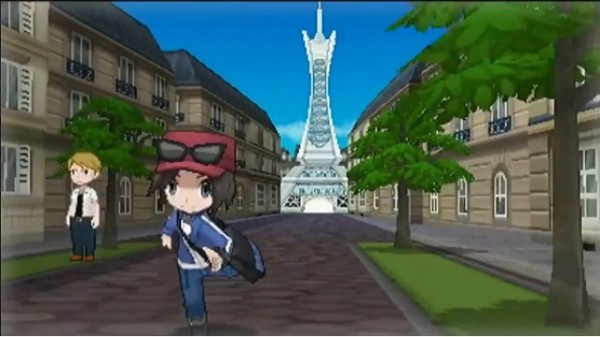 Team Flare is the latest team of bad guys who’s plans are to make the world beautiful. You come into contact with them a great deal as you advance through the story, they are just another bunch of key players in your adventure and without them then you would have no actual enemy to fight. What I love about Team Flare and, in fact, the rest of the story is that it creates a sense of nostalgia in me that only a game like the original Pokemon titles can. It has a layout similar to those games and a big example of that is the way you go and get the fossils, now this isn’t really a spoiler because I’m not going to be specific: You’re on your way to meet a scientist in a cave that is going to give you one or two fossils, he so deep into his work that he wouldn’t even think about coming out to give it to you so you must travel in, on your way you run into Team Flare who don’t seem to want you to get it, you fight them, you win, you get the fossil you want.

It all seems very “Red and Blue” and, my God, is it done well. Now I want to speak to those who say the Pokemon story is childish: In some cases, yes, it may be quite childish but the more you play the game, the more you learn about Kalos and it’s past. Once again I’m NOT going to go into detail but if you’re noticing a lot of people mentioning a “king” or “leader” throughout the game than be prepared, later on in the story, for a tale like you’ve never heard. It’s deep, it’s detailed, it’s not just for kids and I want everyone out there to know that it’s not as basic as first perceived by general audiences, players of the game will know that it dives deeper than just “catch Pokemon, have fun”. 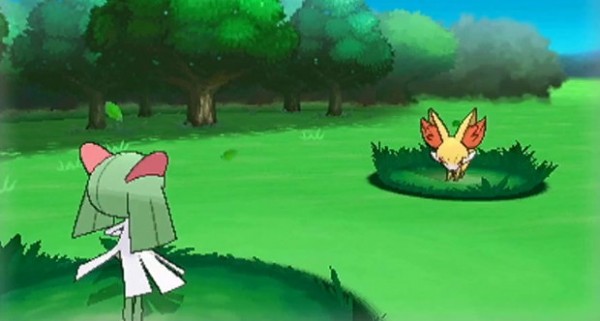 Much like the story, the gameplay follows the same layout as any traditional Pokemon game so, once again, I won’t be going heavily into detail about it. Pokemon battles are, more or less, the same as they always were apart from the glaring change being Mega Evolutions which you can do if your Pokemon is eligible. You can have one of them per battle and they make a pretty distinct different stat-wise so it’s always good to have at least on on your team at all times. The overworld has been upgraded in a way like no other Pokemon game has, it is now much easier to travel from destination to destination not only because of the ability to ride certain Pokemon outside of battle but also because of the addition of roller skates as well as bikes which we’ve seen since day one.

It seems like it has become extremely well-rounded with  the opening sequence of the game not dragging on like it used to, it basically throws you right into the story without having to go through a great deal of monotonous chatter and “learning”, it seems like they don’t treat the audience as stupid anymore. That applies to the whole game actually, it’s a learning experience that isn’t too hard to pick up for people who haven’t played the games nor is it a bore to people like me who have played since Red and Blue.EV training your Pokemon has been made so much easier with the addition of “Super-Training” where in which you play certain mini-games that boost certain stats so that you can customise how your Pokemon fights, they have made it so easy to do and they haven’t dulled the effects either; Pokemon become so much stronger with a bit of Super-Training behind them. Additions like Pokemon-Amie allow you to direct interact with your Pokemon much like you would do in a “Pet-raising” game. 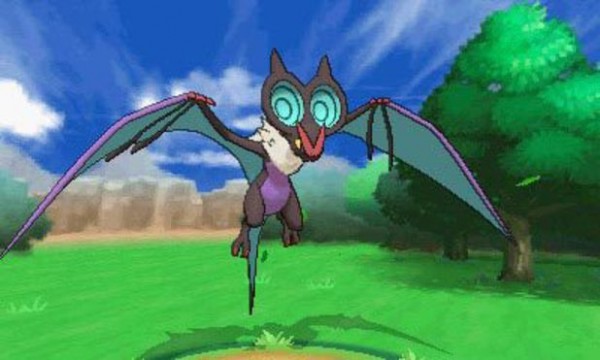 While this doesn’t seem all that useful it actually is; the closer a bond you have with your Pokemon the better it evades, lands critical hits and even recovers itself from status ailments so it is actually worth doing. It seems as though everything they have implemented in the game has been done so to bring you closer to your virtual pals and to make players feel a greater sense of immersion…it works too. The game takes everything that Pokemn has ever given us and adds on top of it without going overboard. Gameplay-wise it’s something great to experience as a whole and I can honestly see no fault in what they’ve done. It has become so much easier to play multi-player, easier than ever before, with the click of a button you could be battling your friend.

The entire online experience is fantastic, they’ve added things like “Wondertrade” where you offer a Pokemon and it is traded for another Pokemon with a person anywhere in the world, it’s a “lucky-dip” system and sometimes you actually come out on top. The addition of 4-player battles is incredible as you can join up with three of your friends and all play at once. A lot of work has been put into online play and it has surely come out on top. They’ve also added the customisation option so that your character can truly be your own instead of a generic player, as you go through the game you’ll find more and more places to purchase clothing and hair styles that will make your character actually feel like…well…YOU! I could go on for days about the gameplay, I really could, trust me when I say that the folks over at Game Freak have really proven themselves to be top dog. 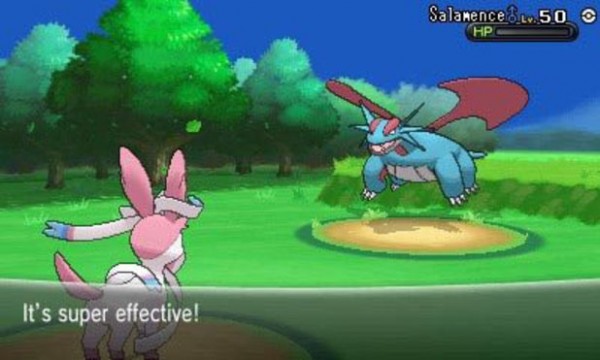 The graphics alongside the 3D visuals in this game have, without a doubt, knocked all other 3DS titles out of the park. Each and every Pokemon, new and old, look fantastic! Each model is incredibly smooth and each of them have their own unique movements whether it be attacking an opponent, using an attack on themselves or fainting from loosing a battle, each Pokemon has a different animation and it really makes the wait for this game more than worth it.

The graphics of this game in general are outstanding! Castles reflect off of lakes, grass blows in the wind, water moves around you as you surf through it and everything within the world looks like it belongs. From posing for a picture to crouching down when talking to a child, it seems this game has everything! The environments you go through are so beautiful and so diverse, you’ll never feel like you have deja vu because the places you’ll travel through are all just so unique and wonderful. 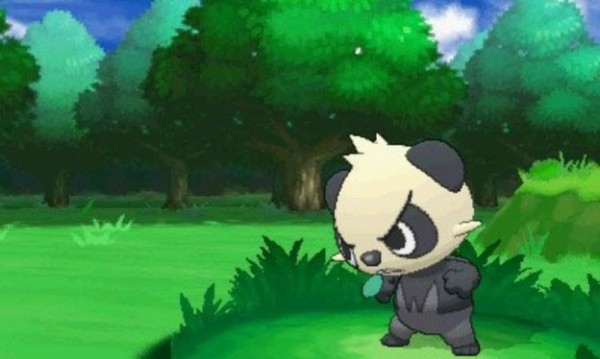 Beauty is a major theme in this Pokemon game and it’s not just shown aesthetically, you can hear the beauty as well. The music, be it battle or general BGM, is all very “Pokemon-ey” and it will definitely remind you of past Pokemon games. They’ve never really had a problem with sounds, it’s always been pretty great and it’s no different this time around. The Pokemon keep their usual and unique sounds except for Pikachu who actually says it’s name throughout battle which is a perfect little touch that the development team added in.

Like all Pokemon games the music matches the town or area that you are in incredibly well, it makes spooky areas seem more spooky and peaceful areas seem more peaceful. While there are no NEW tracks that jump out at you and stick with you forever, the tracks do their job to highlight your situation and the suit so well with the rest of the game that there is no real room for complaint, there are also a lot of music tracks that are very similar to ones from older generations which veteran Pokemon fans will be extremely into. 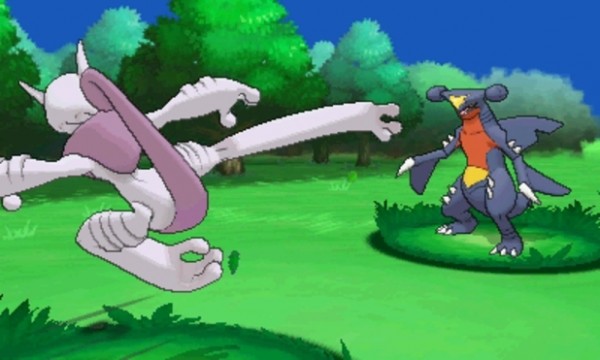 I’m going to just outright say it and I don’t care what “flack” I get if people don’t agree: This is a perfect Pokemon game. Through and through this game is perfect. It basically gave fans everything they asked for and much more. No, there isn’t as many new Pokemon this time around but you’re given a world where you can do so much and see so much that you tend to forget about that, it’s a game that almost forces you to look at the positives after a while and I think that’s great.

There is literally nothing to complain about when it comes to this release and if I could write a 10,000 word review on it I probably could and definitely would. I’ve spoken to people who have played Pokemon all their lives and I’ve spoken to people who played Pokemon sometime deep in their youth, both types agree that that is the Pokemon game we’ve all been waiting for and I personally don’t know how Game Freak are going to top it with the their next release. 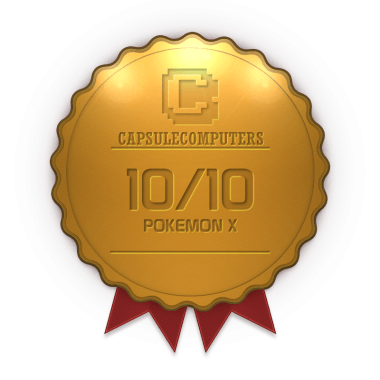