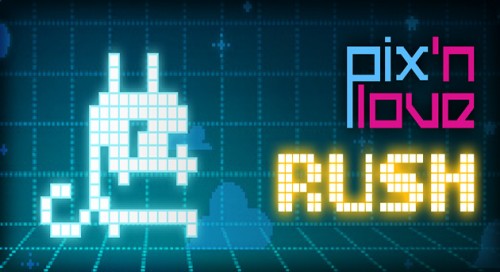 Pix’N Love Rush has been a popular game on the iPhone.  The cutesy main character and addictive game play has made it an instant hit, and now it has been transferred to the PSP, with even more features and game modes.  Since this game has already proven its worth on the App store, and since Sanuk Games, Pastagames & Bulkypix have merely just added more great modes to this game, it is not hard to quickly realize that this PSP Mini is a great game and a natural continuation of the franchise.

Pix’N Love Rush is a rather simple game and is self described as  “All you love in classic Jump & Run games stuffed into 5 minute sessions where your heartbeat will not resist the Rush!”  If your a lover of Sonic games or other classic platformers, you will most likely feel very at home playing this game, not to mention that the game is just super fun.  All 3 modes of play offer different game play opportunities, are challenging and will keep you playing for hours. 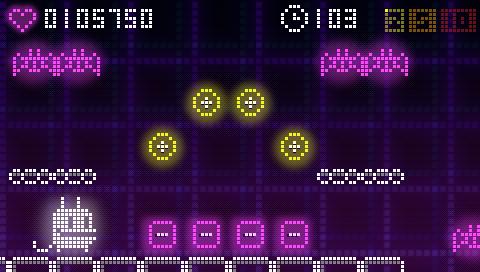 The first mode you’ll come across is the original game. Basically, the entire premise of the game is try to go as far as possible in 5 minutes, while also collecting as many points as you can. To accomplish this, there are items to collect that will grant you bonus scores. However, there are also items that will take away valuable points and seconds. In addition, bumping these undesirable collectibles will shoot your multiplier to zero. Jumping up and down across widely scattered platforms is the only possible way to grab these valuable (or not so valuable) treasures. Of course, things still aren’t so simple. Enemies can also obstruct your way, but you can take care these bad boys quite easily. Simply press the Square button to shoot pellets out of your mouth like a Howitzer, and when these bullets come crashing down, the baddies burst into those oh so addictive points that rack up the score. An infinite mode is also included, and this mode is exactly like it sounds. The graphical style in this classic mode is based on rainbow colors, but when you collect a bonus run (running over a string of “Plus” signs) the graphics change to neon colors, with Aurora borealis patterns dancing in the area behind you. If you manage to get another bonus run, then the graphics change AGAIN!  Get another bonus, and the again, the graphics change. Woo HOO! 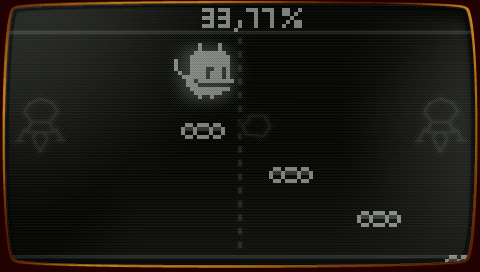 “Cursed” is the second re-imagining of the game. In this game play type, there are 5 levels of difficulty, from Hard to Hardcorest. Yup, there is no easy mode, but this is easily the most fun of the 3 options. The goal is to go as far as possible while jumping across to smaller and smaller scaffolding as the background races by. Eventually, the platforms are so small that it is nearly impossible to play unless you have science fiction-like reflexes and eyesight. It starts out pretty easy, but it does it get super difficult later on. Although it is just straight platforming, I found this simple game type the best and most addicting of them all. In this cursed environment, the graphics are black and white; they remind me of old black and white cartoons. 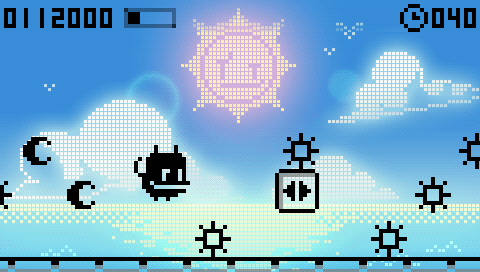 The final way to play the game is called On/Off mode. Run through the level in daylight to collect the Suns. Once you get to the end of the stage, you will automatically turn around and it will magically turn into Night time. On this run, your mission is to snatch up the half Moons. If, on either run through, you accidentally snag the opposite of the what your going for, expect a drop in score and a nasty red X to show up. A puzzle version of On/Off mode is also included. In this version, your mission is also to grab every Sun and Moon, but this time the platforms are much harder to reach and the timer is much less restrictive.  This mode is new to the game for the PSP. 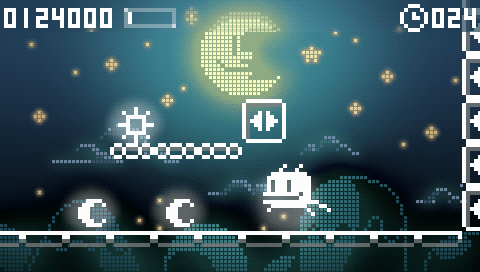 For less than 5 dollars, there are hardly any reasons not to recommend this game.  In fact, there are only 3 faults with the game.  The first is that you can get the iPhone game for only $1.  It seems a little jacked up that the PSP Mini costs $1.50 more. The other problem with the game is that the loading times are pretty long, even when you just want to retry the level.  Re-spawn times are also pretty long considering how simple the game is.  The final error present in this game is that the controls are just a little iffy.  That is, they are not super accurate.

In conclusion though, for less than the price of a Happy Meal that your only going to get one use out of, this game offers virtually unlimited gaming fun.  Plus, its a quality game that will keep you addicted and, when you get tired of one mode, there is always the next one to switch to.  Plus, by supporting this developer, you will automatically help this awesome indie developer create more games.  Just be warned that this game is fairly hard to master, so don’t get scared.