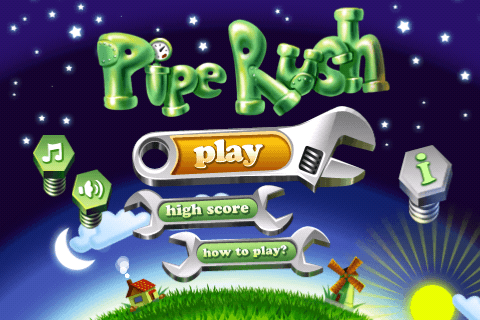 Overview:
Clickgamer has brought some of the top casual games ever to the iPhone/iTouch. They continue to produce these types of games and have brought out their newest puzzle game; Pipe Rush. Has Clickgamer kept its blissful feel and great puzzle atmosphere in the new game? It sure feels like it has.

Graphics:
Everything that you will see in Pipe Rush is crisply drawn and easy to recognize. Each pipe is easy to distinguish and you have the ability to create nearly any type of pipe system that you want as long as it all is sealed. Pipe Rush even indicates whether or not the pipe you’re putting together will end up working, or if you have missed something. The random disasters are also very well designed and are very appealing when they happen as they throw a twist into the gameplay.

Gameplay:
Disaster has struck Pippa’s hometown. What disaster exactly? Don’t know but there are plenty that will be happening as you help Pippa fix the pipes in Pipe Rush. That is the extent of the story in the game, but this is a casual puzzler so that doesn’t really matter, what matters is whether or not it is enjoyable.

That is the definition of Pipe Rush’s simple gameplay. Enjoyable. As you begin each level you will have a certain starting point to begin with and pipes that are sporadically placed around the level that you have to connect to so that each house or building will receive water to it. The way you connect the different pipes together is entirely up to you, though there is a time bonus and a rating system per level to think about. 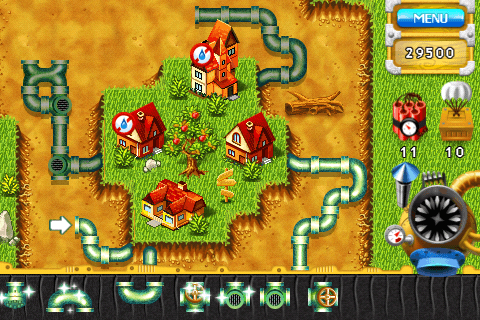 Pipes themselves though are made randomly from a pipe making machine. They travel down a conveyor belt where you can touch and drag towards where you want it to go, with it snapping together easily. You can even work ahead of yourself if you are feeling brave and want to take a big jump ahead which is a nice touch.

If your pipe conveyor belt happens to start getting full or if you do not want to use a certain pipe you can recycle it in a giant grinding machine, or rotate a pipe to fit by using your other hand to tap the rotate button. Certain pipes sparkle, and they will give you either dynamite, which destroys unwanted laid down pipes, and air drops which put a free pipe down wherever you want it. These are useful for when you make mistakes though sometimes are not needed.

There is a small problem when you have to place something in the bottom left corner of the screen next to the rotation button, as the game will think you are attempting to rotate the piece you are holding rather than place the pipe down, which can be frustrating in an otherwise great game. Also there are only a total of 15 different levels to play. Some levels are quite long but it does feel a bit short, though one can always expect that more may be added on a later date.

Overall:
Pipe Rush does everything right that a puzzle game should. It is fun, it is simple, and it is a great way to waste time and have a good time doing it. The graphics are very peppy and enjoyable, though if only there were more levels to enjoy at the moment. Controls are simple drag and drop, with only a tiny hindrance when placing pipes in the lower left corner. Otherwise Pipe Rush is definitely worth the money for a purchase and should not be passed up for puzzle fans.

I give Pipe Rush