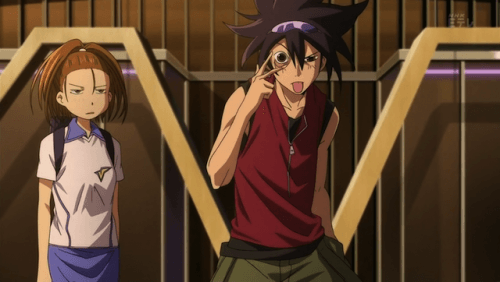 Phi Brain: Kami no Puzzle
Episode 1 – “The contract lurking in the labyrinth””

Phi Brain: Kami no Puzzle is a perculiar series, in that on the surface it bleeds of Shonen game-based series like Yu-Gi-Oh or even Beyblades. However, those similarities I assure you are only on the surface. Phi Brain not only is one of the best pilot episodes thus far of the season, but it is also one of the ones with the most potential to grow into something great.

Like Yu-Gi-Oh and other game-based series, the heroes here are often faced with some form of a game or another, the game here being puzzles (sudoku, crosswords, labyrinths, etc.). Now unlike other game series, there really isn’t any marketable item here. Which I believe is for the better. The puzzle concept is incredibly unique and while it may sound monotonous and tedious, believe me when I say, it is a stroke of genius.

The puzzles actually feel as though there is something greater at stake then most episodes of series in this genre could hope for. The way they have been used to build tension and intrigue took me completely by surprise. I went in with low expectations but left salivating at the mouth needing my thirst for Phi Brain to be quenched. 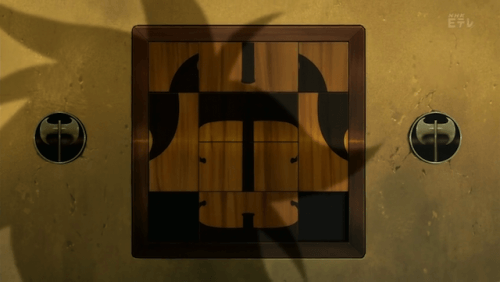 But let’s track back to the story. We have our hero, Daimon Kaito, an outcast who just generally doesn’t give a damn about anything besides… well, puzzles. We start off with Kaito assisting some self-proclaimed “Puzzle King”, that is until the “Puzzle King” goes and activates a trap that nearly kills them both. This was a nice little cold open, it both engaged me from the get-go and had me interested in what was to come.

The world of Phi Brain is still a little cloudy but we get the hint that puzzles are atleast some sort of craze in the school Kaito attends. Everyone considers themselves a puzzle master, even in a refreshing break form the norm, the Puzzle club actually has a lot of members. A lesser story-teller would play it as their club is on it’s last legs and puzzles aren’t quite what they use to be. But that pitfall is avoided completely here.

We soon discover that Kaito is considered as somewhat of an enigma at his school, both in his ability to escape any real punishment from the Principal (Suspended for 10 Minutes for putting about 50 school desks out on the School Oval?) and his impeccable aptitude for solving puzzles. I personally found his character very interesting, because he is simply a fresh character. I tried to find something about him that I’ve seen a thousand times before but I couldn’t. He is a bonafide unique character and I simply enjoy watching how his brain works. 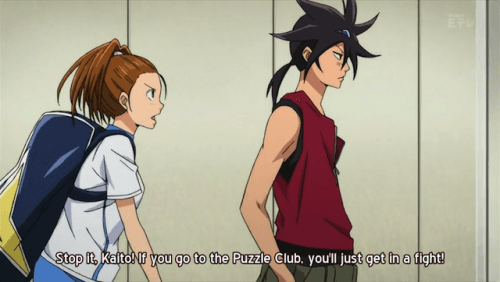 The episode winds up with Kaito being drawn back to the labyrinth puzzle from the beginning of the episode, after recieving an invitation from the mysterious Minotaur. It does warrant a mention that the school Principal and Student Council Chairman, both seem to have some sort of understanding as to who Minotaur is, but that is something that will be tackled in future episodes I imagine. All of this leads to a great moment in which Kaito solves his most difficult puzzle yet after unlocking the Orpheous Contract. It’s still a mystery what this contract is but like the agend of the Principal and Student Council Chairman, will likely be dealt with in the upcoming weeks.

The soundtrack here is equally as engaging as the characters and story. The opening theme was a stroke of genius and matches the series perfectly. The ending wasn’t as good, but was still good enough for me to like it. But the real masterpiece here is the incidental music, I wanted to jump out of my seat when the music started playing as Kaito finally states “Puzzle solved” at the conclusion of the episode. 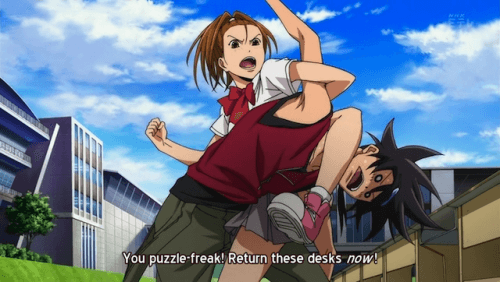 As for the animation and art, it’s really good. The character designs are incredibly unique, as is the art style itself.  There was a lot of impressive sakuga animation segments, that really gave a taste of what Sunrise have in store for us with this series.

All-in-all, I left Phi Brain: Kami no Puzzle blown away by it’s execution of concept and huge potential i has as the series continues on. I know I’ll be tuning in again next week to see how Kaito can solve the puzzle seen in the next episode preview. It’s an excitement I felt with Steins;Gate, waiting to see how the show will stack mystery upon mystery and then topple them all over in one fell swoop. I’m nothing if not pumped for the next episode of Phi Brain. It may not be there yet but I can see this becoming one of the best of season.