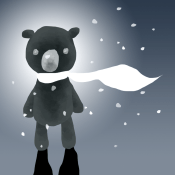 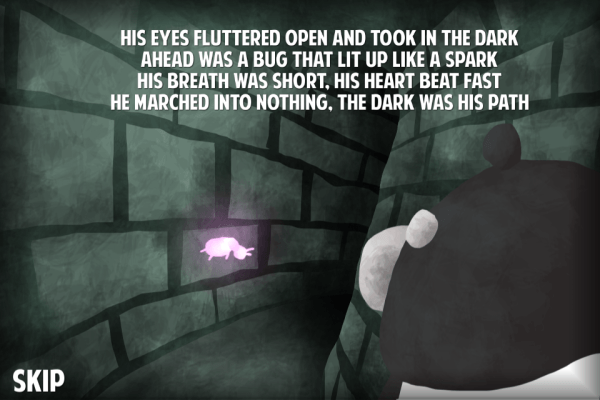 Overview
Most of you have probably never heard of Penumbear unless you’re familiar with the indie iOS scene.  When developer Taco Graveyard set out to develop a puzzle platformer involving a cute bear with a scarf that deals with the separation of light and dark as though it were a hard surface, they had an ambitious project on their hands.  Does Penumbear shine as brightly as the sun or should it be left in the darkest recesses of the castle?  Let’s find out.

Story
Penumbear is the story about a small bear who wakes up in the deepest, darkest part of the castle by a brightly glowing firefly.  He quickly decides he has to work to escape from the castle, but it won’t be nearly as easy as he had hoped.  He’ll have to run, jump, collect, and walk on the very border of light and dark to escape.  If that weren’t difficult enough, he’ll have to avoid a whole slew of dangerous obstacles and monsters too! 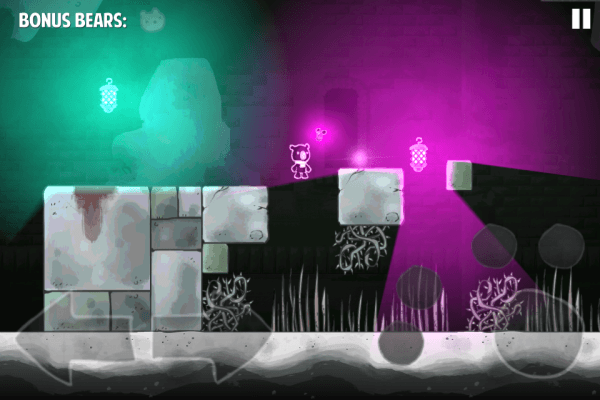 Gameplay
At first glance, Penumbear feels like just another old iOS platformer game.  The on-screen controls will let you walk left and right and jump.  These are cleverly deceptive, though.  Double tapping a direction will let you run and you’re able to double-jump for some added distance and maneuverability as well.  One of the most surprising things about the control scheme, though, was how fluid it felt after a few stages.  The controls are immediately responsive, allowing for some pretty slick platforming in situations that require a fair bit of accuracy.  This is a great strength for Penumbear.

One of Penumbear‘s most notable strengths, and the primary reason you’ll probably want to give it a try, is the incredibly well-designed levels.  Yes, you’ll be running and jumping as you would with any platformer, but each of the 100+ stages is set up with some clever puzzles.  The solution to some may take no more than 20 or 30 seconds, but others may take 15-20 minutes or more to work out.  It’s never so difficult that you feel like throwing in the towel, and you feel like you’ve really accomplished something when you complete one of those more difficult stages. 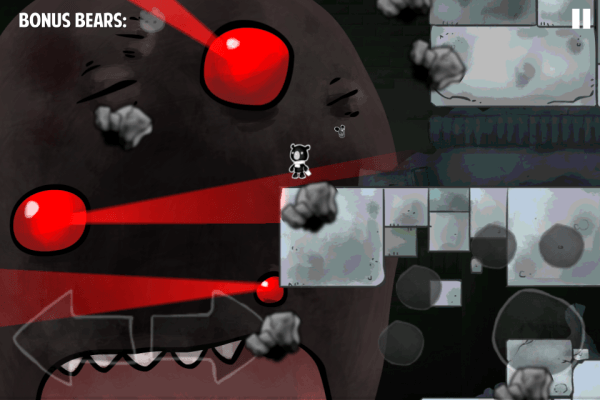 Each level will require you to get to a door.  Most doors will require “keys” to get through – blue, glowing fireflies that you find throughout the level.  The number each door requires varies by stage, and finding each of them is part of the fun.

As you work to get the firefly keys and reach the exit, there will be a variety of obstacles you’ll have to overcome.  Each separation of light and dark is treated as a hard surface for Penumbear, whether that means a wall, a floor, or an incline for you to run up.  When you get within sight range of a light switch, you can send your companion firefly to trigger the switch, thus flipping light bulbs that are placed in the environment.  These are generally placed near structures that cast a shadow, meaning you’ll have to perform some clever run-and-jump as you trigger switches.  It makes for some really rewarding moments that give Penumbear a great share of its staying power.  Also in the world are various obstacles and enemies, including spined creatures, sharp spikes, fireballs, and more.

Penumbear is broken up into various sections within the castle.  At the end of each section (usually around 20 stages), there will be a boss level.  While these can be a serious cause of frustration, they’re well designed and supremely rewarding, ultimately granting you access to the next series of stages in the castle. 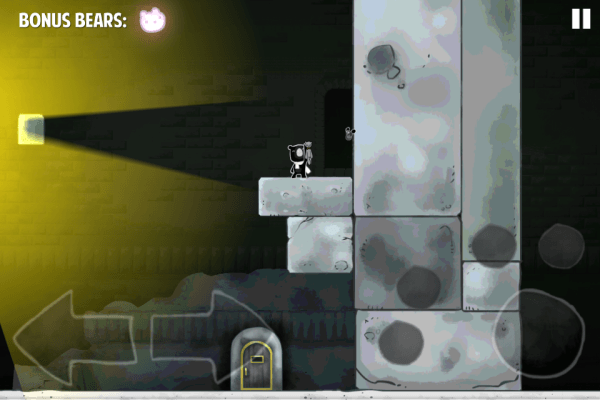 Visuals & Audio
Penumbear‘s visuals are sharp, concise, and eye-drawing without ever getting over-complicated.    The simplicity with which the aesthetics are executed are one of its strongest traits.  The bulk of the game is black and white, but the various lights and fireflies you’ll encounter really pop and the colors look marvelous together.  The animations look great, too.

Penumbear‘s audio is certainly weaker than the visuals, but it’s still nothing to scoff at.  The limited soundtrack may begin to grind on you after a while, but it matches the ambiance of the castle and may even start to get stuck in your head.  The sound Penumbear makes as he runs and jumps sound perfectly in-line with his cute character, and listening to him cheer for joy when you reach the door at the end of the stage is one of the highlights of each level. 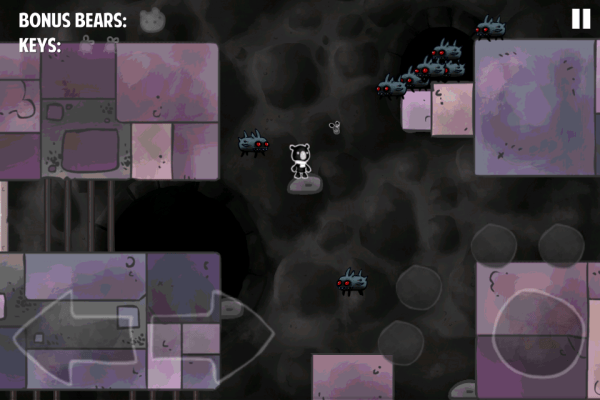 Overall
Overall, Penumbear is a fantastic package.  The platforming is responsive and the puzzles are well-designed.  There is plenty of content here – over 100 levels, hidden stages, 138 collectible teddy bears hidden throughout the stages, and more will give you hours and hours of game to explore.  The game’s visuals are pleasantly striking and, though the soundtrack is a bit limited, you’ll enjoy the few tracks in there if they don’t begin to grate on you.  Penumbear is one of the best puzzle platformers on the iOS and easily worth the price of admission.