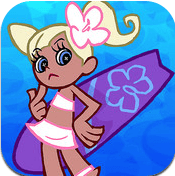 Final Fantasy creator Hironobu Sakaguchi’s latest project is a surf game called Party Wave. Drawing inspiration from one of Mistwalker Studio’s headquarter location, Mistwalker takes the classic Hawaiian past time of surfing and gives it a cartoony twist for the iOS platform. Will Sakaguchi’s first foray into the iTunes App Store establish a beach head for future iOS releases?

Party Wave stars a bunch of easily recognizable and unique characters. However, there is no story in Party Wave. Simply help your surfers have a great day surfing at the beach. 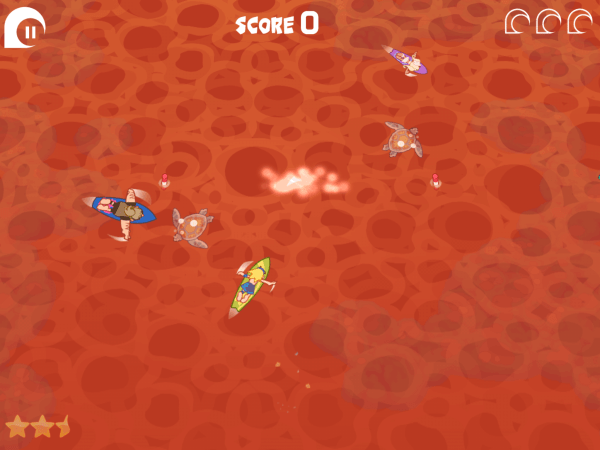 Party Wave is a casual action surfing game that plays like a cross between Flight Control and a frantic game of keep the ball up. The simple description of Party Wave’s game mechanics is incredibly deceptive. Hidden beneath the premise is an impressively deep game that takes great care with the small details.

The game is divided into levels. Each level has a set amount of surfers that will participate. The level itself is split into two phases. The first phase will require players to guide the surfers into the oncoming wave as a group. Players will have to race against the clock to get their surfers in position. The surfers will appear from the corners of the screen at different positions and players will have to maneuver them around obstacles such as rocks and dolphins by drawing a path for them to follow. Once all the surfers are either knocked off their boards or in position, the game will transition to the second phase, riding the waves. The surfers will bob up and down as players tap the surfers when they fall towards the bottom of the wave. Tapping a surfer will send them up to ride the wave. The closer to the bottom of the screen the surfer was when tapped, the higher the surfer will go and more points will be awarded. However, touch the bottom of the screen and the surfer will wipe out. Have three surfers wipe out and fail the level.

Although the game begins at a very low difficulty level, the game quickly becomes a frantic micro-management sprint. Small details have not been ignored by the developers. Each surfer is affected by their physical size. The smaller the surfer, the faster they will move. Players will need to keep this in mind to properly time their interactions with the surfer to avoid a fall. There are plenty of hazards in both phases of the game that will require players to be extremely alert and agile. For even more challenge, there are special items and creatures that can be interacted with for a variety of effects. This surprising amount of depth for such a simple premise is a great example of the amount of loving care Mistwalker seems to have taken in developing Party Wave. 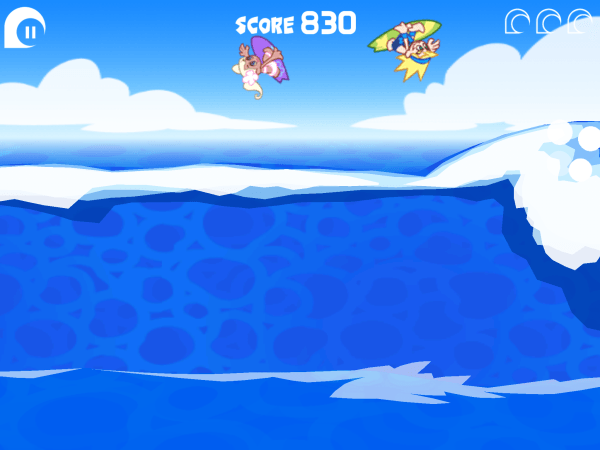 Party Wave features colourful cartoon style graphics that is reminiscent of late 90’s and early 2000s North American cartoons with a slight Japanese twist. The classic spiky haired male lead character is even present in Party Wave. The surfers are unique and immediately distinguishable from each other. The animations are varied and the supporting cast of characters are memorable. The levels manage to look different by changing the colour palettes ever few levels. The user interface is extremely simple and uncluttered, leaving plenty of room for enjoying the visuals. Overall, Party Wave delivers an impressive visual experience that fuses North American cartoons with Japanese style. 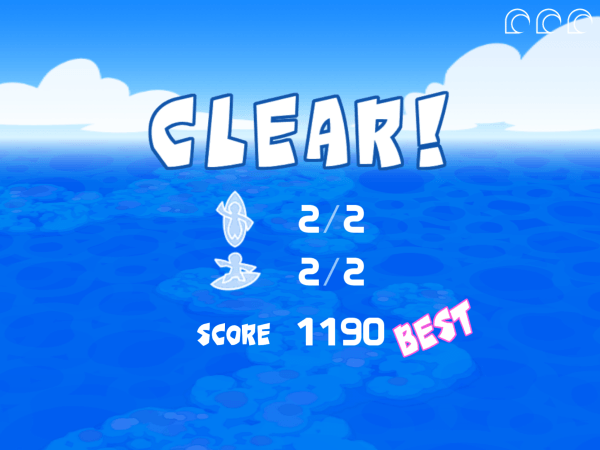 If players are expecting Beach Boys style rock and roll in Party Wave, they are going to be incredibly let down. Instead, Mistwalker chooses to take a more relaxed route with music that would be more at home on a Jack Johnson album. The soundtrack is filled with chill Hawaiian styled tracks that rely heavily on the ukulele and acoustic guitar. Party Wave provides a musical atmosphere that fits perfectly with the cartoon graphics. This is exactly the sort of game players will want to spend a lazy Saturday afternoon playing in bed or outside lounging in the sun. 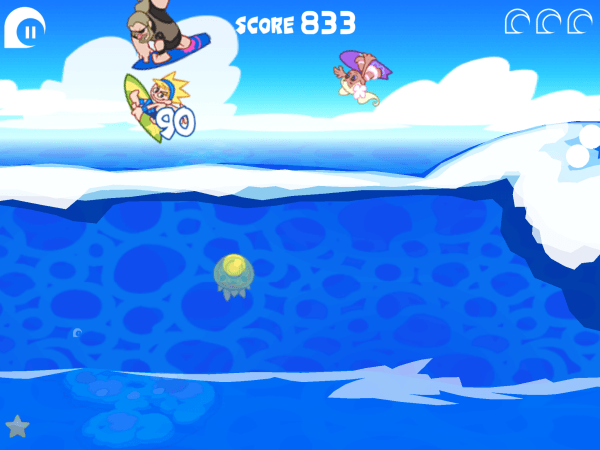 The English phrases are top notch. They are well spoken and easily understandable. The sounds of the oceans are varied and extremely accurate. Those with weaker bladders may feel the sounds of the oceans may be a little too accurate. The menu sound effects are classic Japanese and remind me of a modern take of the Final Fantasy menu sounds. Party Wave is a perfect example of the impressive audio experience that has made the Final Fantasy series memorable, beautiful music and great sound effects that perfectly compliment the visuals.

Party Wave is an impressive first game on the iOS platform for Mistwalker. I highly recommend playing this game on an iPad over the smaller iPhones and iPod Touches. Although this game looks spectacular on the small screen, I feel the extra room for maneuvering and the bigger screen space gives iPad users a slight advantage over their smaller screened cousins. My only concern for Party Wave is the $1.99 price tag. Party Wave is extremely polished and it is obvious a lot of love and care has been taken to create the game. However, the iTunes App Store is full of similar style games that populate the $0.99 price point. For those who cannot justify Party Wave at the full $1.99 have no excuse to not purchase this game on sale. However, the depth of Party Wave’s gameplay, the perfect synergy of the visual and audio experience, and the level of polish is worth taking a chance and buying a smaller cup of coffee for a day.