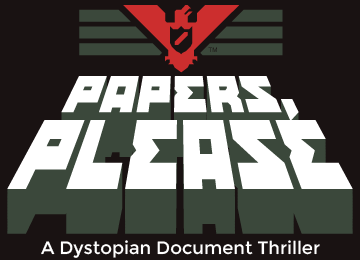 Papers, Please is described by the developer, Lucas Pope, as “a dystopian document thriller.” Players take on the role of a border inspector in the fictional Cold War era country of Arstotzka. A seemingly mind numbing job turns into a difficult task that will challenge players morals.

After eight years of silence, the border checkpoint in Grestin, Arstotzka finally reopens. The player has been randomly selected to man the checkpoint and ensure the safety of the nation. A seemingly simple task of stamping passports quickly turns difficult as the player begins to face moral dilemmas like fighting human trafficking and keeping families together at the cost of the wellbeing of their family and themselves. 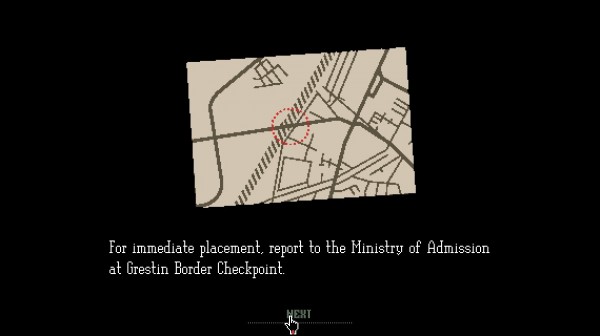 I do not believe there really is any way to completely win at Papers, Please. Of course, the player could accept people into the country solely based on the rules provided by the Ministry of Admission, but that requires making choices that would violate the moral values instilled by modern society. On the other hand, players could do the right thing and let the press into the country to freely report on conditions or turn a blind eye to a woman’s missing paperwork as she flees the tyranny of a nearby nation where she likely faces death. However, that would put the player’s family at risk as such errors are punishable by ever increasing fines, leaving the player unable to pay for much needed food, heating, and medicine. How much does one sacrifice in the name of doing what is right? Very few games have made me stop and question the morality of my actions like Papers, Please has.

The game has a wonderful cast of characters. Some characters, like Jorji, that will stick in the mind long after the game is over. The writing is short and snappy, but some of the dialogue does drift between stereotypical broken English spoken by an Eastern European to completely normal English at times. 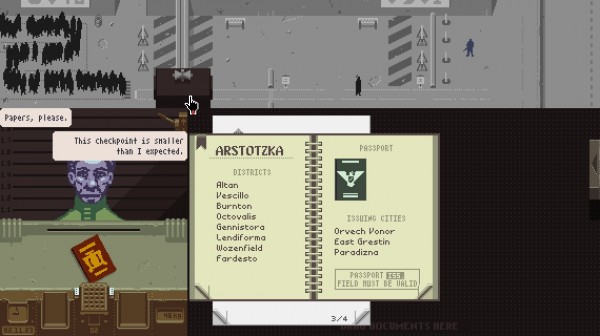 Papers, Please starts the player at a slow pace, checking passports against a few simple set of requirements on the first day. Slowly, the Ministry of Admission begin adding more and more complicated rules as the political situation in Arstotzka changes dramatically in a short 30 days. The player is punished for incorrect decisions and is only provided a limited period of time to see potential entrants. To assist the player, a guidebook is provided to keep track of the constantly changing rules. Eventually, the player will be armed with a tranquilizer rifle and a hunting rifle to shoot down potential terrorists. At the end of each day, the player will need to pay rent for their apartment and make the decision to provide food and heating for their family. Withholding one of these could potentially lead to sickness amongst the family. Eventually, players are given the option to invest money in better equipment in their booth to help the player to work more efficiently and provide better quality housing for their family. Of course, the player will need to keep some savings as an unpleasant terrorist attack can always shorten a work day. 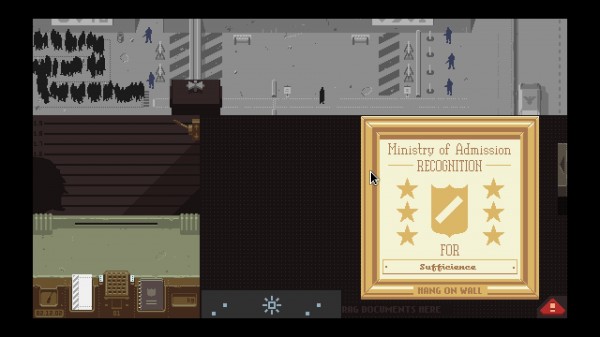 There are two modes of play. Story mode will put players in charge of the booth for 31 days. There are twenty possible endings to the game that can occur at any time during those 31 days. Some are better than others. Each day is saved individually. Some of the requests characters make can be a little frustrating, however, the save system allows players to go back and change the course of their game without having to start from beginning. After a certain ending is completed, Endless Mode is unlocked.

Papers, Please is a mentally intense game, not just for its moral quandaries, but for its requirement for intense attention to small details under the pressure of time. For those looking for a more relaxing experience, Easy Mode is available from the menu. The gameplay could be best described as Phoenix Wright’s hunt for inconsistencies with a large weight hanging over the player’s head that threatens to crush the player if they do not work fast enough. As I lack the mental fortitude of a champion chess player, I found myself needing a break after an hour or so from sheer exhaustion. 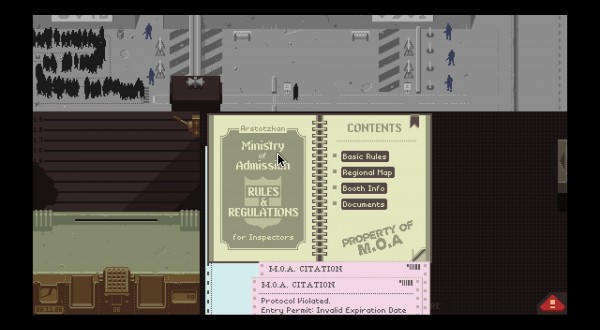 The controls are mostly handled by the mouse. A few booth upgrades do provide some keyboard hotkeys to speed up certain tasks. Papers, Please goes to great efforts to immerse the player in the feeling of running an inspection booth. Passports must be lined up underneath the correct stamps to allow or deny access to Arstotzka, papers must be handed back to their owners by dragging and dropping them onto the owner. My only complaint is the documents area in the booth is a bit cramped. I would have liked to have seen more space.

Papers, Please is presented in a deliciously retro style. The colours are drab and muted except for brilliant splashes of crimson red. Lucas Pope does a fantastic job of building this feeling that the player has picked up an old game from Soviet Russia. 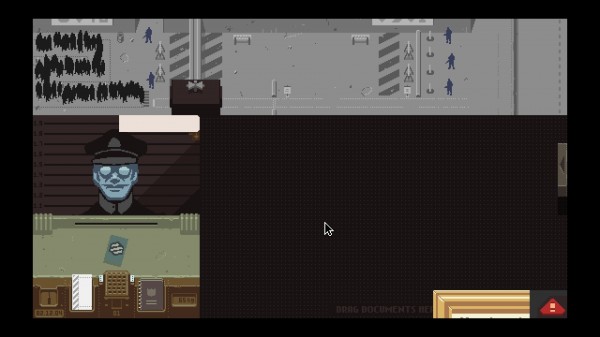 The audio is minimalistic in Papers, Please. Shifts in the booth are completed without music, with only the muted sounds of the waiting crowd outside, the clacking noises of the booth, and the creepy and unintelligible commands of the loud speaker to keep the player company. During the menu and at the end of the level, the player is treated to Soviet style patriotic music. The minimalism works wonders for Papers, Please as it really adds to the immersive experience. 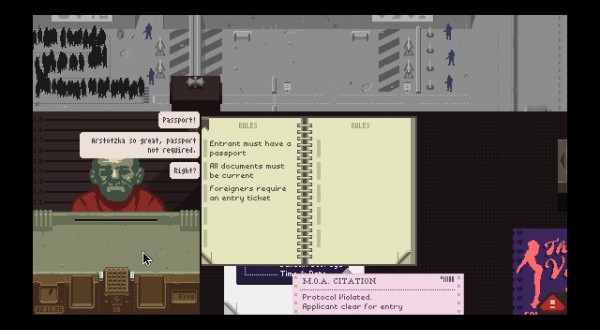 Papers, Please is an intense experience that every gamer should experience. University level essays could be written dissecting the game’s moral choices and the player’s behaviours. Nonetheless, Lucas Pope creates an entertaining game that is will make players ask questions about their questions, their beliefs, and the world that surrounds them.