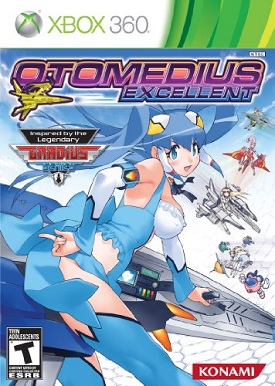 Overview:
There has always been a certain franchise that stands at the pinnacle of side scrolling shoot’em ups, and that is the Gradius series. The Gradius series was created back in 1985 and since then has been a large number of titles released for the series, as well as a few spin offs to the main franchise. One of these was named Parodius which literally was a parody of their own game.

Now they have made a title which goes a bit beyond parody and decides to throw out some risqué anime girls who pilot various ships of their own. This isn’t the first title in the Otomedius series, but it is the first one to make its way over to North America. Despite having a cute anime-like appearance, how does Otomedius Excellent fare as a standard shmup? Let’s find out.

Visuals:
Now Otomedius Excellent isn’t a bad looking game by any means however those coming into the title expecting amazing 3D graphics will be disappointed. There are plenty of different enemy types that you will face off against but after a while you will feel that you are simply fighting wave after wave of the same enemy, though bosses are nice and daunting in appearance.

The stages that you fly around in are extremely well varied and none of them will share a similar design. Now most of them will simply be a straight flying through without any obstacles built into the match but there are a few with environmental dangers to keep the player on their toes. Plus, there are various occurrences which happen in the background which are a nice touch. 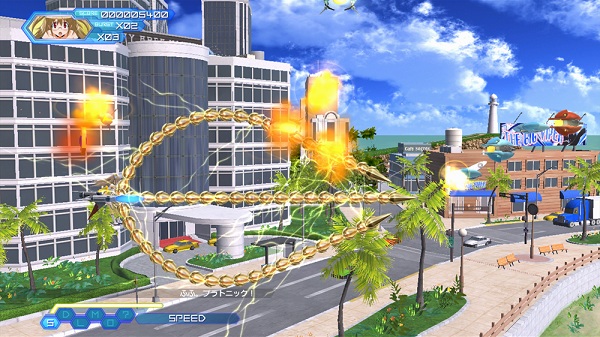 Now, removing the 3D bit, the anime graphics and anime designs are quite wonderful. Now before I go into this further, all of the characters you are going to be playing as are very moé, and each of them has a different character design as well as a different ship to fly in (most references to past Gradius series ships, including one Castlevania reference). Now the characters themselves are mostly all skimpy and there will be plenty of side boob and boob jiggling but none of it is really focused on, which makes it bearable for those who don’t enjoy that type of thing but more than enough who enjoy fan service. It is also worth noting that the animated intro movie will make you wonder if you have popped in an anime DVD on accident with the quality of the animation and the musical accompaniment.

Audio & Subtitles:
Now one of the first things that should be mentioned is the fact that Otomedius Excellent contains an all Japanese voice track and that is all. There is no option for an English voice track, as the title does not contain one, meaning that everything you are going to be listening to will require some form of subtitle to understand what is going on unless you know Japanese of course. 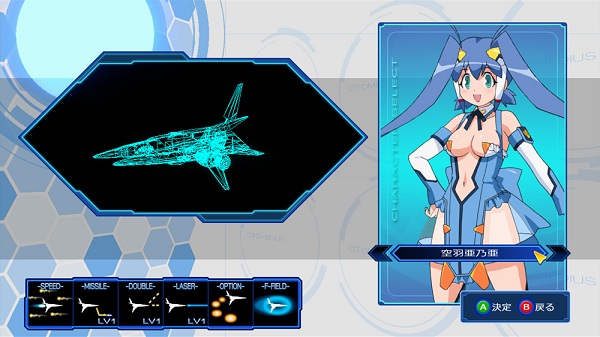 The music for the title is quite enjoyable and there are different tracks for each level you fly through, with the background music changing occasionally during an event or whenever a boss descends to kill you a few times. Also I should note that the title boasts a wonderful anime opening as I mentioned before which has been completely subbed in English with colorful subtitles, which I found to be more enjoyable than just plain white. If you feel adventurous and no one is around you can even try to sing along with it as the Japanese words sit above the English and highlight when sung similar to a karaoke section.

The song itself is also very enjoyable, though if you know what J-Pop sounds like then you won’t be too surprised by what you will see once the game begins. The main characters are all voiced and will say various phrases as you play through the game, and even talk during load screens if you move the pointer of their picture and press A which is a nice little feature. But there is one problem with this.

There are a number of things within the game where there just aren’t any subtitles to let you know what is actually being said. One example is during the loading screens, the girls will say various phrases however players will be unable to tell what they are actually saying due to no subtitles being included. This also is a problem in the game itself as there are a couple of instances where an enemy boss will talk and there simply won’t be any subtitles shown. This is especially prevalent when you meet the final boss for the first time and 90% of what she says isn’t subtitled with only the last three words shown.

What is shown though is usually relatively accurate, but I would be remiss to say that everything is perfect. There are a number of instances where those who pay attention to the subtitles will notice occasional typos as well as instances of poorly worded phrases or just poor translations that mar the experience. 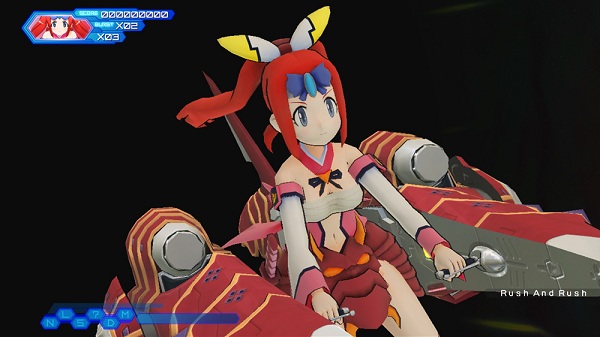 Gameplay:
There is a small semblance to a storyline here, but nothing is ever really spoken and most players will likely be flying by the seat of their pants with the events going on. The girls you control are actually female students who attend the St. Gradius High School and have special abilities which allow them to become fighters against the Bacterian Army.

At its core, Otomedius Excellent is a side scrolling shoot’em up title that will involve the players controlling their own girl and flying through stages while avoiding enemies shooting at them. One quick and rather pleasurable adjustment to the flying however is that colliding with the normal environment doesn’t damage your ship unless you are squished between the environment and the scrolling screen.