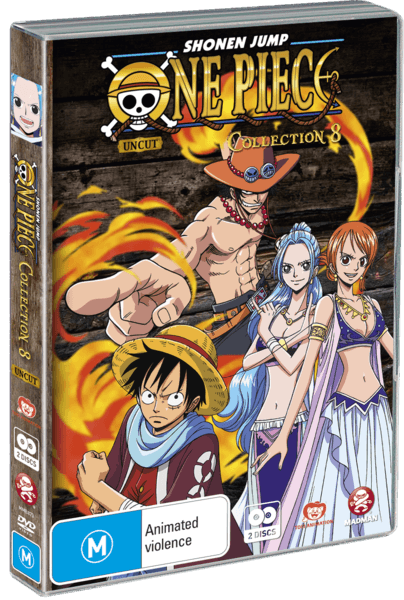 Overview:
One Piece has proven time and time again that it’s world is ever-growing. It is perhaps one of the most expansive and well developed worlds in anime history. There have been series that take things far and wide, but the scenery usually is nothing more than a backdrop. However in One Piece, the world is on the forefront, as it should be, considering the show is about pirates sailing the vast sea in search of the fabled treasure known as the One Piece (left behind by the late Pirate King, Gold Roger).

Each place Luffy and friends visit becomes another part of this ever-expanding world, with each episode the world grows and grows. Looking back on the past 7 collections and past 91 episodes the Straw Hat pirates have taken us to amazing places, whether it by a tropical island ruled by a murderous dictator-like Fishman Pirate, a prehistoric island full of Dinosaurs and Giants, an island forever shrouded in snow and even at one point the belly of a whale! Collection 8 however introduces us to the long anticipated Alabasta Kingdom, a desert country in dire need of rain and secretly being overtaken by a criminal syndicate.

That is what this collection of episodes centers around. The crew have to deliver Princess Vivi to her Palace, but to do that they must brave the harsh desert and survive the onslaught of the desert’s creatures. It probably isn’t the best place to jump on with the series as it is well and truly in the thick of it, but if you don’t mind jumping in mid story then you won’t have a problem here. Though I feel it is necessary to give a brief description of the series up until now for those just coming aboard.

What you need to know is this: Luffy want’s to be king of the pirates, to do so he has to find the One Piece treasure, so he sets sail to the seas and gains friends along the way and engages in some of the greatest battles in shounen anime history. Lets not forget that their are magical devil fruits across the world which give those who eat them powers. Luffy is one of those people. If that piques your interest, read on. 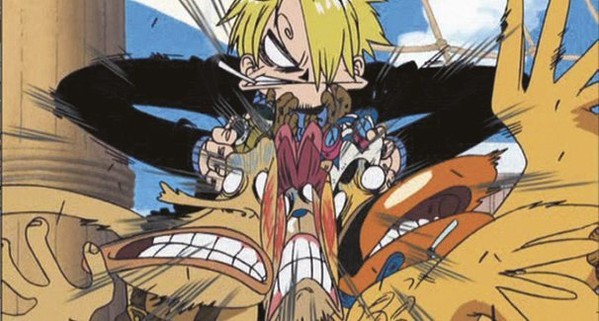 Story:
This collection of the series follows the crew across the desert kingdom and mostly consists of stand-alone episodes and build up to the nearing battle between the Straw-Hat Pirates and Baroque Works. If you have been following the series up until now, you would know that an evil organization known as Baroque Works, headed by the mystery “Mr. 0” or Crocodile, is planning a hostile take over of Alabasta Kingdom of which Vivi is the Princess of.

Vivi enlisted the help of the Straw-Hats Pirates a few collections back at Whiskey Peak and has since been traveling with them. But in what appears to be a growing pattern, Luffy, the captain of the Straw-Hats has gotten them lost and ends up taking them the longest and most dangerous way possible on their journey there. Along the way they made a new friend in the reindeer Chopper, who ate the Human-Human fruit giving him the ability to speak and walk like a human. He becomes the crews doctor after the events of the previous Collection and that brings us to where we are now, Alabasta Kingdom.

The crew spends the majority of this collection trekking across the wild desert. Most episodes stand alone such, but their is plenty of plot-meat to be seen, such as the pivotal introduction of Luffy’s brother Portgas D. Ace and Vivi’s discovery of the suffering her royal family could not prevent for those in the small desert villages. But unfortunately a fair chunk of screen time is given to fairly dragged out ‘oh no Luffy is lost again’ scenes. We get it, he is easily distracted and has the navigation skills of a 2 year old child. But despite those tedious scenes, this collection is pretty much all build up to the big battle, with foreshadowing of things to come, such as Crocodiles mysterious ability and the ongoing rebellion against the King of Alabasta. 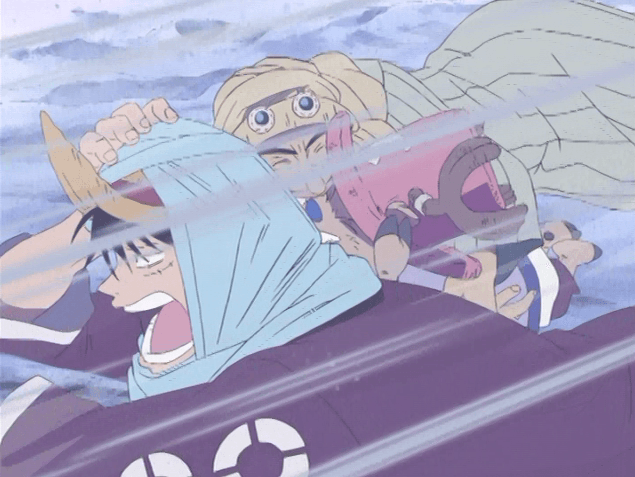 It is all just setting up bigger things to come for the next collection, but that doesn’t mean it doesn’t work well on it’s own, because it does. The story arc of Ace’s arrival is executed perfectly and left me pining for more scenes of Ace. Hopefully we won’t have to wait too long to see him make a return, his fight with Captain Smoker was well done, if a little understated. Once he takes his leave though, we return to the ongoing story of Baroque Works. The collection ends on a mighty episode in which all the members of Baroque Works meet at the Spider Cafe. We get a good look at them all and even a few of their abilities, it overall puts all the pieces into motion for what is no doubt going to be an epic Collection 9.

Artwork:
When commenting on the artwork of One Piece, I always have to say that it is not for everyone. It’s an extremely unique style and some aren’t interested in something that deviates so greatly from the common anime style. Personally, I enjoy the artwork and have noticed an improvement of the animation quality and art over the series. It is interesting to note that whilst the artwork hasn’t changed so drastically, the budget has noticeably increased in the last few collections.

The episodes in this collection were released in Japan in the year 2000 and yet still hold their own against the anime of today. In some cases looking even better than some series released today (I’m looking at you Naruto Shippuden! Google: Pain’s Face from Naruto).

The backgrounds are suitably baron and desolate, yet maintain a sense of life that is unusual for a desert setting but works wonders here. I could almost believe that the desert has a life of it’s own. It has the same feeling that the series has given the sea, that it is a lonely desolate place, but from desolation, life springs forth. Whether this was their intention or not, it is pulled off brilliantly through the series’ artwork and in this particular case, the desert of Alabasta Kingdom. 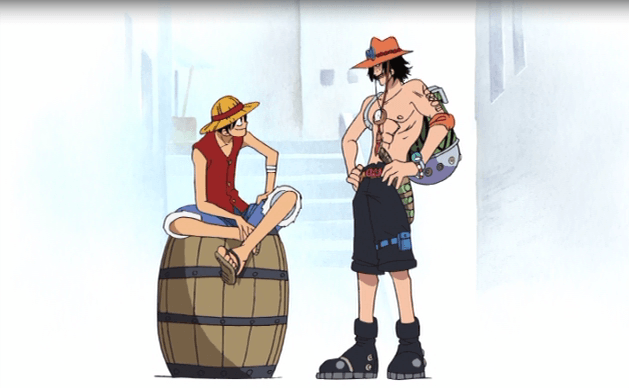 I have to say, I am a huge fan of the soundtrack of One Piece. Both the Opening and Ending themes through the series have been great. But it’s the incidental music that truly shines through in this collection. The scene in which Luffy and Ace reunite was beautifully done, and the score was perfect for that moment.

The current Opening theme “Believe” originally by Folder 5 in Japanese and translated and sung in English by Meredith McCoy really sets the mood for the series. It is all about believing in yourself and follow your dreams, which is exactly what One Piece embodies in each character (but more about that later).  It has been the opening for a good 40 or so episodes now and hasn’t grown old in the slightest.

“But what about the voice acting?” someone shouts at their computer screen. The voice acting is brilliant, as is evident through nearly all Funimation dub releases. You’d be hard stretched to provide an example of a miscast or badly acted part in these 12 episodes. All the cast has evidently grown into their roles by now perfectly and they hit all the right notes. For this collection though the MVP for best performance has got to go to Travis Willingham as Luffy’s brother Ace as I mentioned earlier on. He perfectly encapsulates the character of Ace from the get go and provides an awesome counter-part to the empty-headed Luffy, who also is voiced superbly by Colleen Clinkenbeard, proving once again she has the proverbial balls to match the original Japanese voice of Luffy and come out unscathed. 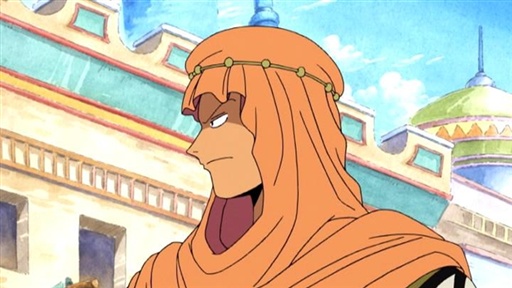 Characters:
There isn’t a lot to say about the characters of One Piece, because it’s well documented how great the characters are. They each are unique in their own right and have set the benchmark for shounen characters. The main characters each have their own personal and individual dreams and their own unique personality, sure there have been characters in other series since One Piece who have similar personalities but they are simply a carbon copy  empty vessel in comparison. One Piece’s character have heart and a long history and fandom overseas. In Japan, One Piece has become the best selling manga of all time, outselling Dragonball, which many believe is due in part to the characters likability. I could talk for hours about the characters but I will instead focus solely on the major player of this collection.

Portgas D. Ace, the brother of Luffy,  who makes his official debut after breifly appearing (albeit vieled in dark clothing to hide his appearance) during the final episode of the previous collection. His appearance sets off a several episode story arc in which he reunites with his brother after several years apart and then travels with the Straw-Hats across the desert for information regarding his search of a pirate known as Blackbeard (who was mentioned in the previous collection in Drum Island).

We are introduced to several things to come, such as Ace’s inclusion into the Whitebeard Pirates and the promise of more wild devil fruit users such as Ace, who uses a wicked Flame-Flame fruit power. The scene in which he takes out a fleet of Baroque Works ships with one fire fist punch was indeed epic and a great way to introduce his power.

As said above, Travis Willingham does an excellent job voicing Ace and I look forward to seeing more of his work, in particular an episode far off into the future of One Piece that followers of the Japanese version should know about. I suggest not looking that up if you want to watch the series spoiler free. Please refrain from posting spoilers in the comments as well.

Personally I can not wait to see where these characters take us in the future. 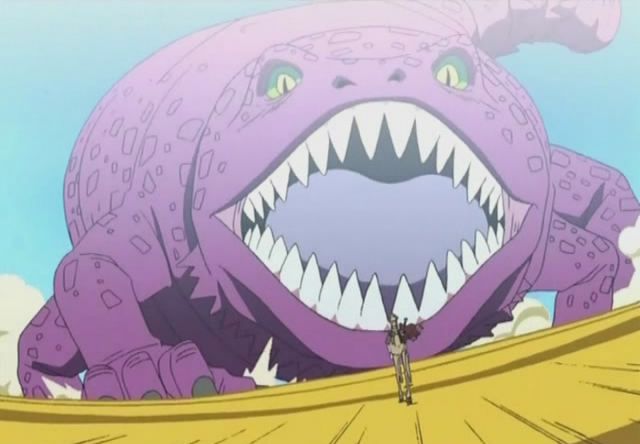 Overall:
This was yet another great collection of One Piece and another great job by Madman with this release. Overall this is an excellent part of the One Piece series albeit not the most ideal point to come aboard but a good enough part none-the-less. There is little to no issues with this series and the only thing that was a bother about this particular collection was the slightly dragging Luffy is Lost scenes. But they weren’t enough to derail a brilliant “piece” of One Piece (4kids dub reference! No?).

I highly and proudly recommend both this collection and series to any one of any age or gender, it is not to be missed!

I give One Piece Collection 8 :