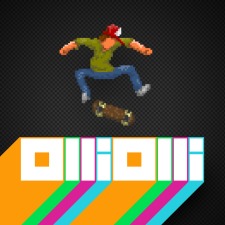 OlliOlli was originally intended to be an iOS game, following up on Roll7’s Gets to the Exit, which debuted on the platform in 2012. A chance encounter between developers changed the destiny of the game, with Roll7 quickly coming round to the idea of button based control and a Vita exclusive at the suggestion of Velocity Ultra developer James Marsden.

The iOS prototype had proved tricky to control, and the final Vita form of OlliOlli still retains some of that toughness. The platform has allowed the developers to expand some of the game’s mechanics, and despite having iOS roots the entire game was built from the ground up for the Vita. 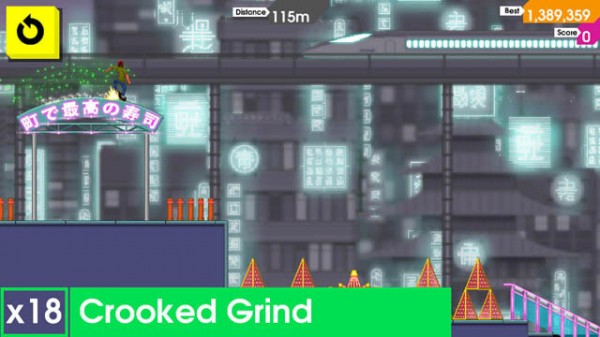 OlliOlli is a 2D, side scrolling skateboarding game, and as such the control system takes some getting used to, particularly if your skateboarding history has until now been in the realm of Tony Hawk/ Skate.

Not only can you pull off tricks and grinds, but you’ve got to land them too. A couple of stabs of the X button gets your skater up to full speed, and pulling and/or rotating the control stick charges up a trick. Releasing the stick sends you skyward, and the only way to net the points from your inevitably awesome antics is to land with some sense of grace.

Landing isn’t the only skill to get a handle on. Perfect grinds boost scores and speed alike, and are only pulled off by hitting a rail at the last possible moment. Pulling off some of the trickier moves requires some pinpoint stick swirling and the levels themselves get increasingly more complex concotions of rails and gaps: the smallest of mistakes capable of sending your skater bouncing across the landscape, bones crunching all the way.

The twitch reflexes OlliOlli demands do come with time, and despite the difficulty curve it is largely a fun learning experience. Going by some of the mammoth scores on the leaderboards, it is much tougher to master. Luckily the difficulty is of the best kind – that dependent on player skill and not dodgy or unfair mechanics. 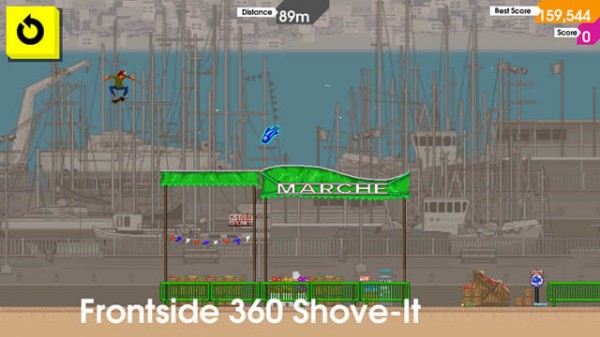 OllieOllie’s Tricktionary contains a myriad of moves: from Ollies to Bluntslides to 360 Hardflips, but you’d be hard pressed to distinguish between the more complex ones. In untried levels and harder difficulties there simply isn’t time to think, let alone watch, so the sticks and shoulder buttons are flicked and held and turned pretty much at random in the bid to survive until the end. Grabs and flatland tricks are all absent, with the game focused almost entirely on grinding and spins and flips.

It is a hell of an addictive game though, so despite the trick system not being as fleshed out as you would expect, the ride you get from OlliOlli is still exhilarating – and that ever present replay button will get a lot of use.

Five challenges populate every level, and completing them reveals the corresponding pro course, which comes with its own trickier demands. As ever with skate games the player is forever in pursuit of high scores and massive combos, with restrictions like no kickflipping and no pushing fleshing out the modest selection of challenges.

The challenges are a great hook for replayability, with high scores and world rankings fleshing out the onslaught of reasons to just keep on going. Every stage can also be played in Spots mode, where touching the ground spells the end of the run, challenging players to set the highest score possible in one combo. 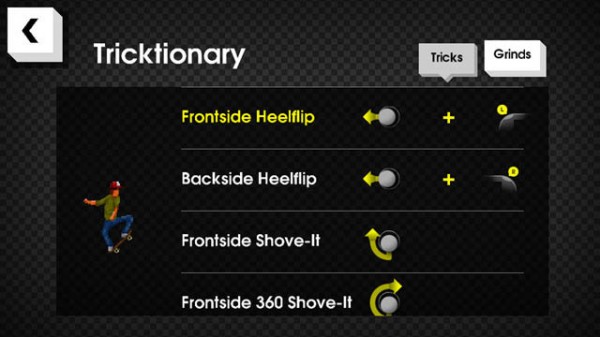 Those up for a truly difficult experience can complete all amateur and pro challenges to unlock Rad mode, OlliOlli’s tip of the hat to its early iOS existence. Originally the landing system only allowed for perfection or utter failure, and that iron rule is revived for Rad mode.

If OlliOlli doesn’t spark that much commitment (or you just can’t be that good!) then there are always the leader boards and world rankings, which manifest most obviously in the Daily Grind. This 24 hour challenge is Spots mode with all the forgiveness sucked out, asking players to set the highest score possible on a particular stage. Practice runs are infinite but meaningless, with players only getting one shot at a scored run, making it entirely possible to end up with a big fat zero because of one dodgy landing.

The Daily Grind is OlliOlli in microcosm. Each run has the potential to last mere seconds or play out for the long haul, and everything in between. You can learn the obstacles or fly in the face of them, scoring big or landing hard depending on your skill and luck.

One thing to be aware of with OlliOlli is that it’s a bit crash prone if the Vita is connected to the internet. Roll7 are aware of the problem and are working on a patch, but until that comes around stability is vastly improved by switching off Wifi/3G or putting the console into Flight Mode. 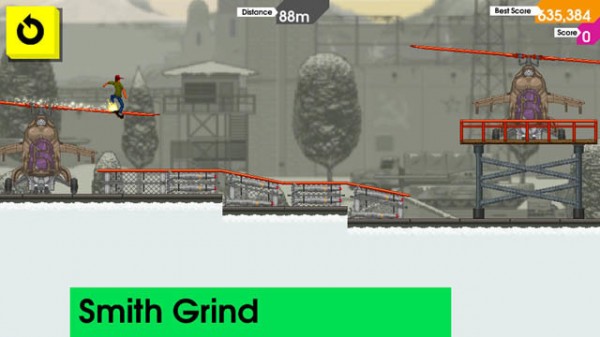 Despite the increasing complexity of the stages the level design in OlliOlli never really changes. The five different areas all have distinctive themes but take those skins away and you’d be hard pressed to distinguish a Base level from a Junkyard one. The skater is too small to afford any sort of detail, and as mentioned before most of the tricks are a bit anonymous visually.

Thankfully OlliOlli has some excellent music that kicks things up a notch, with a handful of largely electro tunes providing the atmosphere needed to elevate the somewhat drab (but detailed) environments. The music makes OlliOlli feel like a skating game, whether it’s a chilled Massive Attack style number or an adrenaline shot reminiscent of something from Aussie wunderkind Flume.

Whilst it is missing some variety in both level design and its repertoire of moves, OlliOlli will take your eyeballs (and ears) and glue them to the Vita, whether you have twenty minutes on a bus or two hours on a couch. Fast, frustrating, and fulfilling, it’s a must own and a boon to the system, proving that iOS isn’t always the way to go in the pursuit of handheld gold.