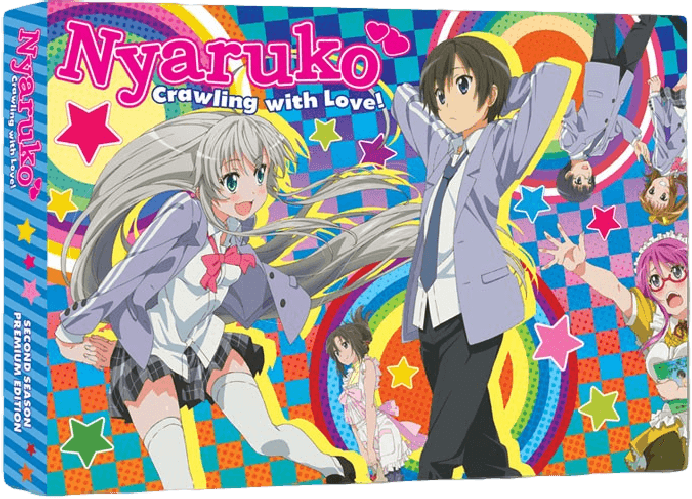 Overview
What happens when you take a romcom harem and mix in some self-aware humor, references to everything from other Japanese anime to Western television and video games, and Lovecraft mythos? You get Nyaruko: Crawling With Love! is what. Over the course of the first season viewers were introduced to a colorful and hilarious cast of characters in a series that hardly took itself serious. Now we are here with Nyaruko: Crawling With Love!’s second season, previously dubbed Haiyore! Nyaruko-san W. The question is, does the series manage to retain its charms throughout this second season?

Story
As previously mentioned, Nyaruko: Crawling With Love! digs into the Lovecraft stories to bring forth many of the main characters and even enemies that are encountered in the series. While our lead character Mahiro may be a human with a certain special trait, the other three main characters happen to be aliens with the leading lady being Nyaruko, a Nyarlathotep, and her two tag alongs, Kuko, a Cthugha, and Hasuta, a Hastur. 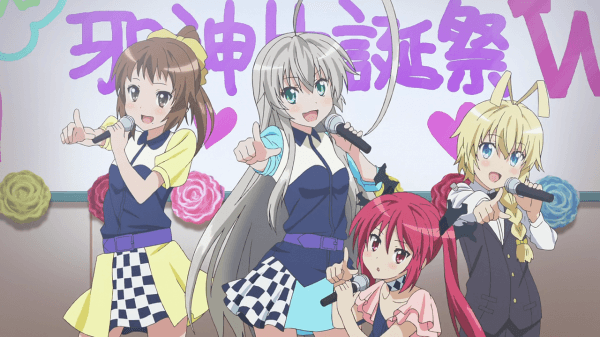 All three of these aliens have moved in with Mahiro and while their mission is to protect him from other alien attacks as well as the Earth after a previous event left Earth’s deities vulnerable, they are far more content doing everything they can to stick to Mahiro’s side. From attending classes to returning an overdue book to a library on the other side of the galaxy, this series kicks things off as if we never left it.

Things do begin to change slightly when Kuko’s cousin Kune shows up and reminds us that Nyarlahoteps and and Chtugians are mortal enemies. It also helps that thanks to Kune’s romantic obsession with Kuko, we finally see a bit of character progression as Kuko convinces Mahiro to act like her lover in order to thwart her cousin’s marriage attempts. This is only the beginning of what seems to be a relatively large shift in focus for the series which previously only saw Kuko as a side character. 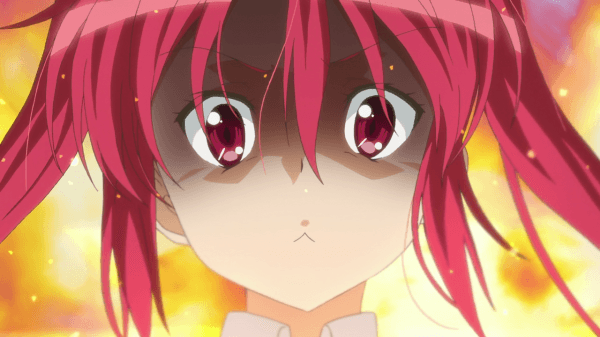 A fourth wall breaking joke about how more character routes tend to open up later in a game is a good way to describe how Nyaruko: Crawling With Love! Season 2 handles Kuko. While Hasuta is only given some very minimal development and a couple of the side characters, including Shanta surprisingly, are focused on slightly, Kuko becomes one of the main highlights of the series thanks in part to her humorous reactions to events and how she develops over the course of the series and starts to analyze her feelings about Mahiro and Nyaruko more.

Then again, considering her plans for their potential children, it is clear that the series is willing to make a joke about anything possible. This also means however that there is very little development for the titular character Nyaruko. While she does struggle with her emotions during Kuko and Mahiro’s lovers act, she quickly reverts back to her normal overly energetic self once the arc ends. This is a bit of a disappointment as she is even being coached on relationship building and although we’ve seen how her calmer attempts at expressing herself have affected Mahiro, a calm approach is far from fitting with the all-over-the-place style of the series which places comedy above all else. 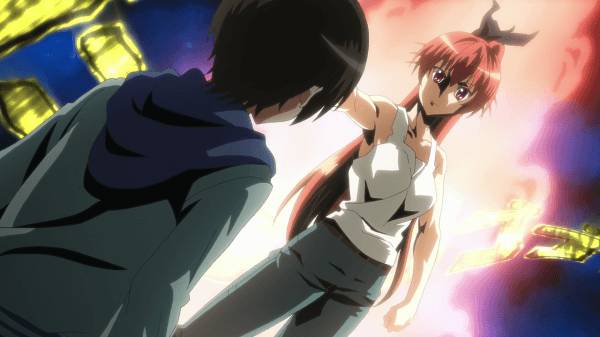 Now although the story of Nyaruko: Crawling With Love! is far from complex, in fact the Lovecraftian origins of many of the characters are simply played for laughs, this series has a very high barrier of entry. You see, not only is this a second season which means that to understand most of the interactions, viewers will have to have seen the first season and also because the entire series is packed full of referential humor. Many of these references are of older anime series, but everything from Super Sentai to various manga and light novel series pop up all over the place.

As such, most of the humor from these references and the reliance on slapstick comedy may be hit or miss for some while I found it to be consistently hilarious. There is also a certain point, thanks mostly to the introduction of Kuko’s cousin Kune to the story, that the sexual humor starts to become heavily relied upon whereas before it was usually only present when Nyaruko was flirting with Mahiro or Kuko’s attempts to get closer to Nyaruko. 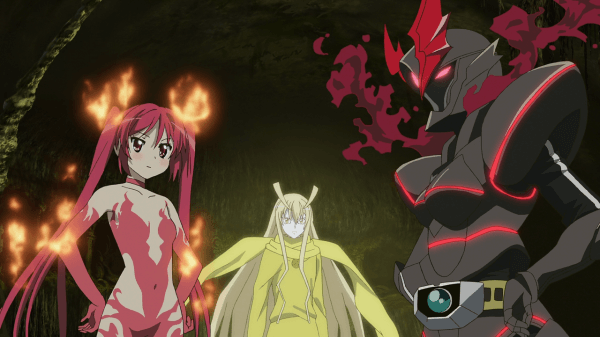 It is worth noting that compared to the last season; this one does not contain nearly as many action sequences. Instead the series focuses more on the numerous random and hilariously foreshadowed events that can take place in a world where Aliens believe Earth’s entertainment, especially otaku goods, to be a high value commodity. This may be a disappointment to some, however thanks to the other ways that these confrontations are explored; mostly every situation in this series feels fresh which is necessary in the case of a second season with little overall development.

Visuals
Xebec returns to continue animating the second season of Nyaruko: Crawling With Love! and it appears that this time around they had a larger budget to work with as not only are the colors just as vibrant as before, but the characters are also given a larger variety of costumes throughout the series and even their facial expressions are more varied this time around, especially in Nyaruko’s case where her “ahoge” often forms shapes to go along with her mood. 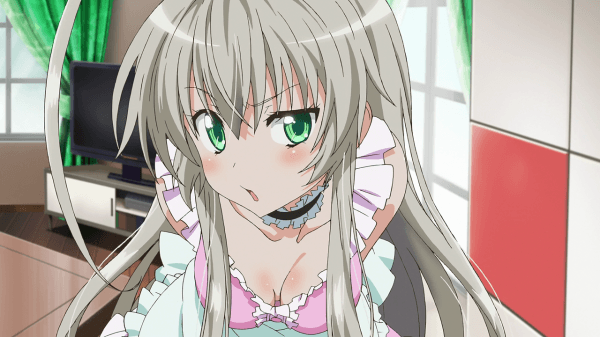 This also helps with the humor factor since many of the jokes are either slapstick or reactionary based, requiring decent character designs to pull off correctly.The backgrounds this time around are still nicely varied, especially whenever the gang travels to a warped alien environment. That being said, as mentioned earlier with the sexual humor, the fan service level remains rather tame as nothing is explicitly shown but there are plenty of very obvious references and situations that appear throughout the series, usually with Kuko and Kune being the cause of it, as well as a number of lewder outfits that Nyaruko wears to tempt Mahiro.

Audio
It is worth noting that similar to the first release, Nyaruko: Crawling With Love!’s second season has only been released with the Japanese voice track and English subtitles. While an English dub may be preferable for some, in the case of this series this is for the best thanks to the series being jam packed with references that likely wouldn’t have translated well into English. It also helps that the Japanese dub cast is not only very fitting but also features some rather well known voice actresses. 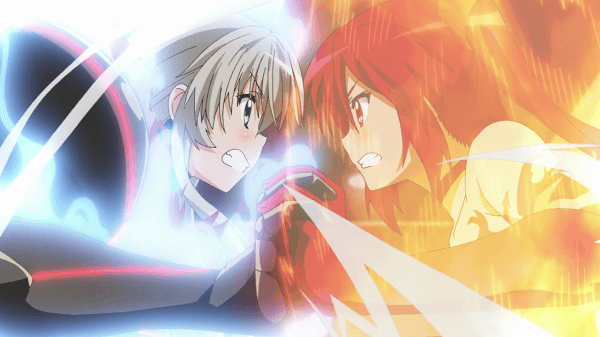 One thing that really shines in the second season is how many different ending themes are used over the course of the series. While there is only one opening theme “Koi wa Chaos no Shimobenari” it is an extremely energetic opening fitting of the series and full of references of its own, there are six different ending themes spread across this season. Occasionally these ending themes will focus on which characters were highlighted in that episode, such as the songs for Tamao or Kune and Kuko, but they change from episode to episode. Another nice touch is that each of these songs are also sung by members of the Japanese voice cast which is something I’ve always preferred whenever possible.

Extras
With the release of Nyaruko: Crawling With Love!’s second season NIS America has given the series their classic premium edition treatment. Now it is worth noting that this release does not contain the OVA that was released in Japan earlier this year and instead the only actual on-disc features are a clean version of the opening theme and a clean version of the ending theme songs. 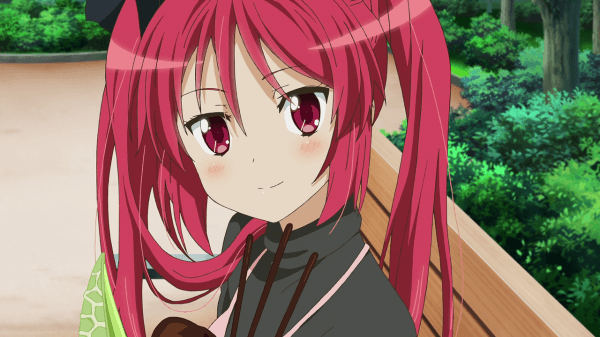 The two Blu-ray discs are packed in slimpak cases featuring artwork of most of the main characters but specifically highlighting Nyaruko, Mahiro, Kuko, and Kune. As far as the physical bonuses are concerned, the release also comes with a hardcover art book and NIS America’s long box slipcase.

Overall
Nyaruko: Crawling With Love! Second Season feels like a series that has changed very little ever since the first episode aired. When you consider how most of the humor comes from Nyaruko’s personality and the way that these characters interact with one another that may be for the best. The shifting focus from Nyaruko to Kuko is also an interesting touch that keeps things fresh.

Though because of this and the often simple and comedic ways most situations are handled, the story does suffer from some stagnation as it feels like very little has actually changed once the credits role on the final episode. Of course, fans from the first season will still find plenty to enjoy here thanks to the energetic humor constantly on display alongside a cast of characters.