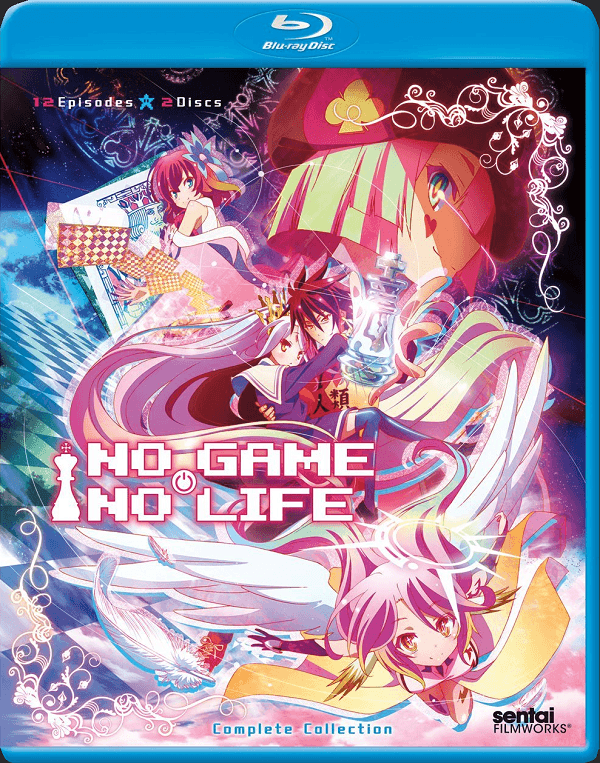 Overview
The concept of bringing people from a normal world into a fantasy land is nothing new and in recent years it has been on a big rise in the anime industry as the many light novels that have taken this approach are starting to be created. No Game No Life happens to be one of these but puts a bit of a twist on things and when it first aired back in 2014 many people were pleasantly surprised by what the series had to offer. So now that it has been released in English, is No Game No Life worth your time?

Story
While many series using the hero from another land premise gift their summoned or reincarnated hero a special power in order to save the world, No Game No Life starts with two people as far from functional as possible. The eighteen year old Sora and his eleven year old sister Shiro are self-proclaimed NEETs that have become known as the ruthless gaming group known as Blank. No matter what type of game they play and no matter how their opponents may cheat or how outnumbered they are, the pair have always overcome the odds as long as they work together and have remained undefeated in the world. 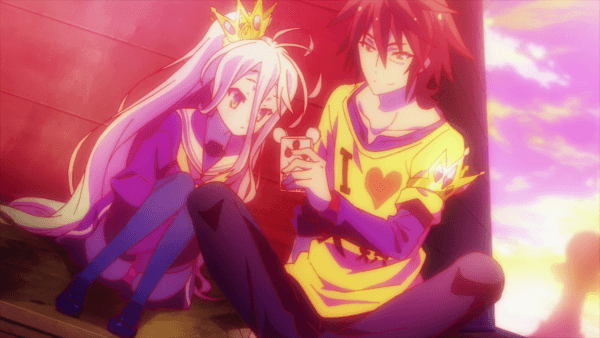 Unfortunately this gaming prowess hasn’t translated into a successful life for these siblings as they refuse to participate in the game such as normal life. Calling it a “crappy game” where people are punished regardless of what they do, the two shut themselves away and spend all of their time online gaming. That all changes when they are suddenly invited to an online chess match and sent an email asking if they are happy with their current world.

After spending quite a bit of time winning the chess match, their opponent reveals himself as a god named Tet. Tet extends an invite to the world of Disboard where all no one is allowed to kill anyone and all violence has been outlawed after Tet found himself the only god left standing after an extended period of war. In Disboard everything is upheld by ten pledges and all types of conflict are resolved through games. 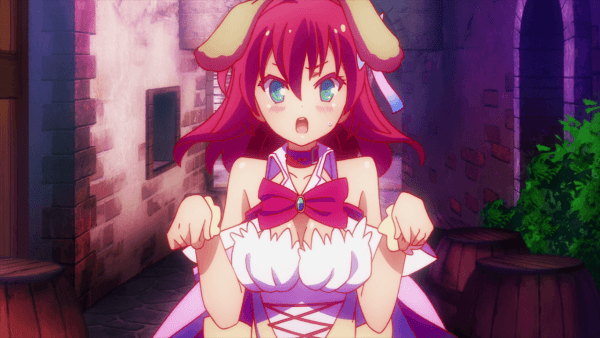 In a world such as this, Sora and Shiro find themselves taking a liking to the concept and although they find themselves confronted with a number of challenges right off the bat, such as finding a place to eat and sleep, their gaming prowess allows them to quickly overpower practically anyone who stands in their way. After taking part in a number of games and taking over the last bastion of humanity in the world of Disboard where sixteen total races reside, the pair find themselves eager to take on the rest of the world, even if it means betting everything to do so.

Taking a pair of characters and dropping them into a situation where they are unbeatable may not make for the most enthralling of series but No Game No Life handles this situation perfectly thanks to two elements of the story. The first happens to be that despite Shiro and Sora being geniuses in their respective fields, the two turn into nonfunctioning train wrecks when separated for a fairly good reason that is actually explored, and that their personalities create an absolutely hilarious combination that shines throughout this season as the two experience the various elements of the fantasy world, especially whenever Sora’s ego takes a bit of a beating when he starts to fantasize about the girls and is knocked down a peg by Shiro. 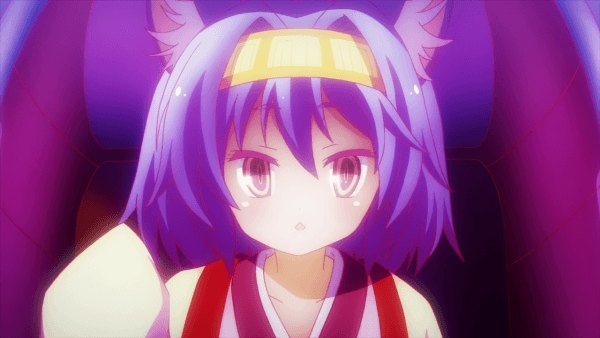 Put their personalities alongside a cast of side characters that are similarly well handled, with the prideful but airheaded daughter of the previous king of humanity Steph and an angel-like being with powers created to eliminate god but simply adores learning anything she can while also seeking to please make up the usual present cast of characters that keep everything feeling fun, though the ecchi requests of Steph does become a quick running joke that some may not like at first even though it is worth noting that she does have a number of shining moments in this first season.

The serious approach that Sora and Shiro take to winning and the delight from crushing their opponents through incredibly well planned out events involving various manipulations and some rather twisted thinking at times makes up the other part of what makes No Game No Life work so well. Although viewers are given very little doubt that Sora and Shiro will win their games, the way they go about it makes for an enthralling experience. The pair state that a “game is won before it starts” and this becomes a running theme as players see them compete in games ranging from simple rock-paper-scissors set to extremely fantastical games that see chess pieces responding to a player’s charisma, a world destroying word-chain game against an unstoppable being, and even a Galgun referenced game against a tiny warbeast. 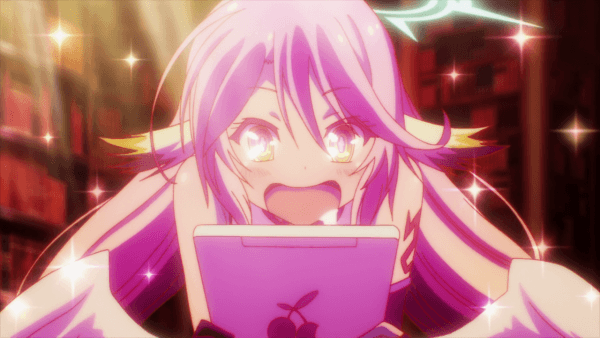 While I will not go into more detail about how exactly the pair manage to win these games, they are all handled in unique and well thought out ways that are spectacularly over the top in nature making it impossible to look away while also never being able to guess what will happen next. Put together the way these games are handled with the outstanding humor and colorful cast of characters and you’ll find No Game No Life to be a series that is as fun as it can get when it comes to this premise, though a few may find the lack of development for the core cast a bit lacking.

Visuals
I must say that while there are options to purchase No Game No Life in DVD format, the approach that the animation studio Madhouse took towards No Game No Life practically requires that the series is seen on Blu-ray. This is due to the fact that the series is packed with bright coloration in every aspect of the world with only the environments occasionally taking on a slightly dulled down look to the color saturation in every other aspect of the series which I find to be an absolute treat that I would like to see more of down the road from other series willing to take such a vibrant and colorful risk. 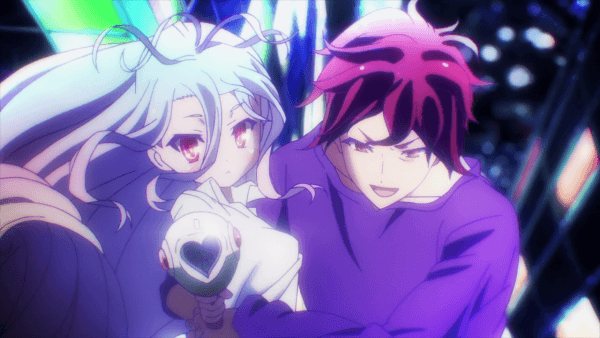 The characters are very well designed with a number of unique looking appearances to be found here and there is a surprisingly high level of quality to be found during the action sequences that occur during the final game in the season as the characters find themselves partaking in the aforementioned shooting game where the many fast paced shooting scenes never take a drop in quality. It is worth noting that although the title does try and get a bit of fan-service in here and there, it is extremely limited to the point that Sora mentions that their friend steam is there to block all the naughty bits and even in a separate game this manner is handled in a way that sticks true to the rules laid down before the game began.

Audio
This release of No Game No Life features both the original Japanese voice track as well as the new English voice track recorded by Sentai Filmworks. The English voice cast does a great job fitting into the personalities of their characters though it is worth noting that a few aspects of Izuna’s dialogue have been altered to fit the English track but for the most part viewers will find themselves pleased with the way that the English dub handles the series. 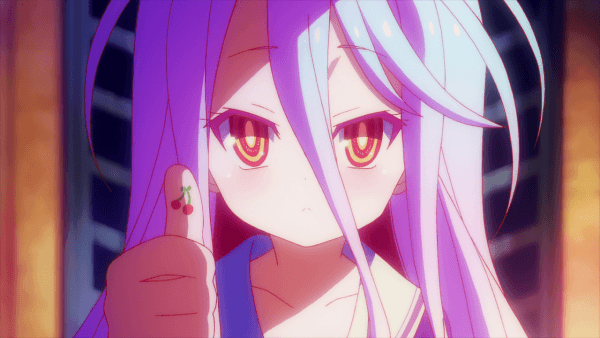 As for the soundtrack, background music is used impressively well at times as it is usually used either to help make a dramatic moment all that more impactful or to add comedic tone to a humorous scene. The opening theme for this release is “This Game” by Konomi Suzuki which is an excellent theme that I found difficult to skip past at times while the ending theme is “Oracion” and is performed by Shiro’s Japanese voice actress Ai Kayano. The ending theme is a bit softer in tone and does reflect certain changes that occur during the series, especially during a certain set of episodes to play up the fact that something has gone amiss.

Extras
With the release of No Game No Life on standard Blu-ray Sentai Filmworks has included a few standard bonuses as well as a collection of shorts for the series. The standard features of course are things such as clean versions of the opening and ending theme, Japanese promotional material, trailers for other series from the company, and the rare inclusion of Japanese commentaries for a select few episodes. 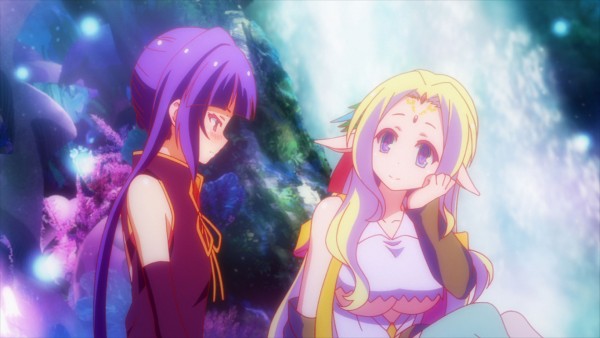 As for the collection of shorts, we have six on offer with this release. These six shorts run around three to four minutes each and take various stylized approaches to side-events that take place throughout the series’ storyline with a heavy emphasis placed on humor and unique designs.

Overall
No Game No Life may have been a series that people had overlooked back when it aired as it’s basic premise didn’t make it sound overly special due to the number of titles with the same approach coming out recently. Thankfully this title has proved itself to be truly exceptional thanks in part to the personalities of the characters and the humorous scenes that come out of their interactions with one another but primarily due to the handling of the games that Sora and Shiro play against the other residents of Disboard. No Game No Life is presented in gorgeous fashion and those who pass on this series will be doing themselves a rather large disservice as this is a series that will leave you asking for much more after the last episode wraps up. 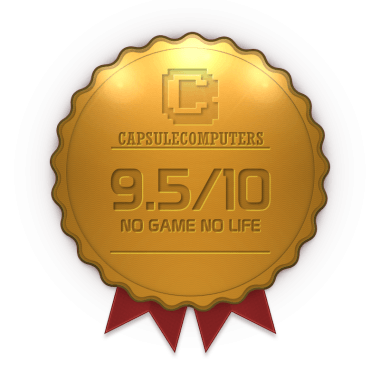