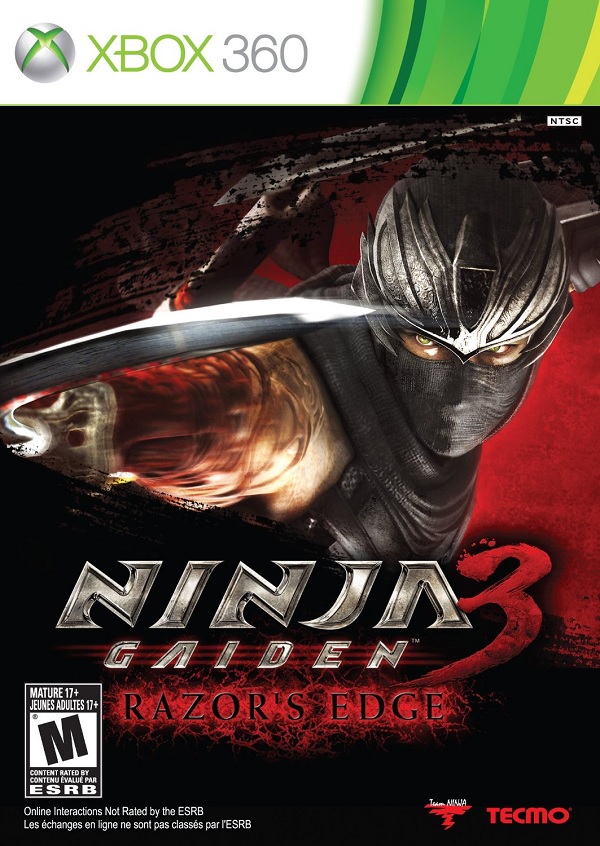 Overview:
A little over a year ago, Tecmo Koei and Team Ninja released Ninja Gaiden 3 onto the PlayStation 3 and Xbox 360. However despite this being the first numbered title in the series (not counting re-releases) in four years, both fans and I found it a lacking experience that suffered from terrible gameplay decisions which ended up ruining the experience for many. However now the company has brought Ninja Gaiden 3: Razor’s Edge, originally exclusive to the Wii U, to these consoles, has the company managed to salvage the Ninja Gaiden name?

Story:
For the most part, Ninja Gaiden 3: Razor’s Edge continues to tell the same storyline of the original game. However a few aspects have been removed while a little bit more has been added in. For example, the game’s entire prologue sequence has been removed and although the title’s whole curse aspect still remains, it isn’t as ham-handed as before. 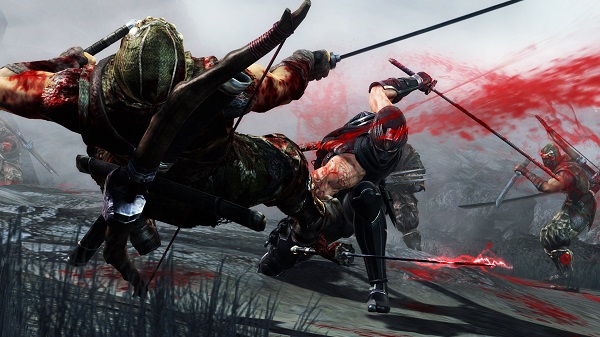 Anyways, the story follows Ryu Hayabusa who has being called out by a terrorist organization that is threatening the lives of a number of hostages. Upon investigating the situation, Ryu finds that a masked alchemist called “Regent of the Mask” is responsible for everything. This alchemist then curses Ryu with a curse called the “Grip of Murder” which fuses his signature Dragon Sword into his body and feeds upon the deaths of others. However despite this curse, Ryu continues to struggle against the alchemists and must put an end to their plans which will throw the entire world in chaos if they come to fruition.

One thing removed entirely from Razor’s Edge is the whole demonizing of Ryu’s slaughter. The original title featured enemies which would moan and cry for mercy after being critically wounded and even enemies begging for their lives and Ryu ignoring their pleas and murdering them in brutal fashion. This does create some disconnect from the game’s whole demonizing of Ryu’s murders though which can be a bit confusing and feels un-finished. 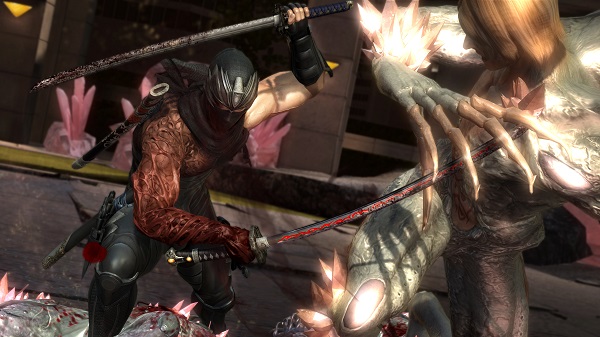 Outside of that, Team Ninja has also added a couple of new chapters to the game’s storyline which focus on the female ninja Ayane. Being playable for the first time in NG3:RE, Ayane’s storyline runs alongside Hayabusa’s and while it doesn’t add much to the storyline, it does help freshen things up for those who have already experienced NG3’s predictable and underwhelming storyline.

Visuals:
As far as graphics go, NG3:RE remains as impressive visually as its predecessor with highly detailed character models and an actual increase to the amount of gore in the game thanks to the new executions and the various dismemberments that occur pretty much against every enemy. Ryu and the new girls added to the cast, Ayane, Momiji and Kasumi are well designed and features fluid move-sets which look great in action. 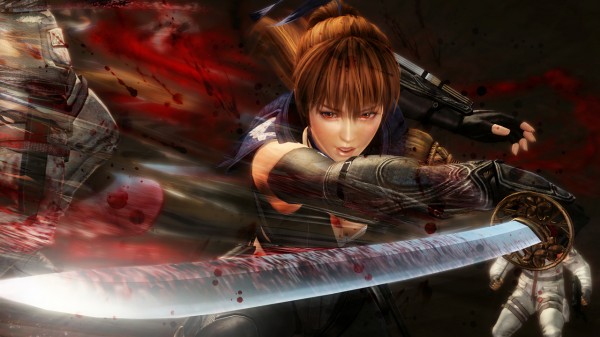 Unfortunately while the character models and enemies are great looking, the environments themselves are very sub-par in appearance and while they are varied enough to keep things interesting, every stage tends to feel very superficial.

Audio:
Thanks to the revision in enemy behavior, the enemies that the player fights against no longer will simper on the ground or beg for mercy repetitively, however instead they will now often repeat the same lines in combat, usually cursing the player after critically wounding them and setting them up for an obliteration technique, so ultimately the company has traded begging for cursing in this regard. 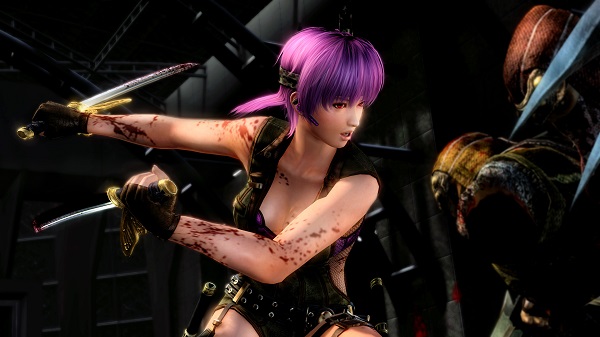 The game’s background music is mostly forgetful though the overall sound effects of combat are rather impressive. Unfortunately the game’s voice work is still very underwhelming and although Ayane has been given more of a role, her voice actress is actually a bit of an annoyance more than anything else thanks to the way that the character is voiced.

Gameplay:
One of the biggest issues that many took with Ninja Gaiden 3 is that everything in the title simply was mainstreamed to the point where it wasn’t even the same game fans had come to love. Players were saddled with only one main weapon, one room clearing Ninpo attack, a number of little QTEs and various other combat choices which ultimately led to a poor experience. However Ninja Gaiden 3: Razor’s Edge rectifies most of those issues and offers a brand new experience that fans of the series will likely be accustomed to. 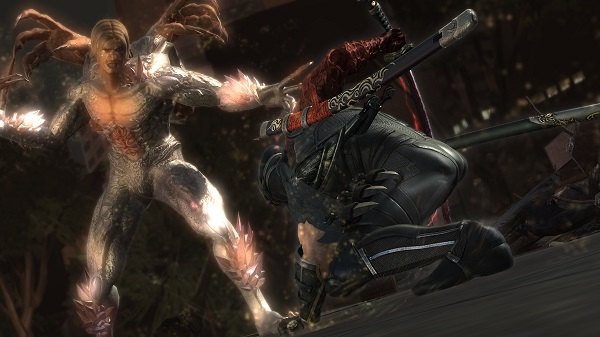 Instead of one simple sword, some shuriken and a bow and arrow, players are now able to use a large number of weapons for melee attacks, though the way that these weapons are added to the player’s inventory are shoddy. Since the company chose not to design a shop system, though they did design upgrades and skill unlocks which I will mention later, the various weapons and Ninpo abilities the player obtains are usually dropped off from a Falcon at a save point or unlocked by collecting Golden Scarabs which are scattered throughout the level.

These weapons, including familiar ones such as the Lunar Staff, Eclipse Scythe, Falcon’s Talons and more, all have unique combo-strings and are a joy to wield. In fact, each weapon is so different it is possible to simply play through the game simply to enjoy using one of the newest weapons you’ve unlocked. The aforementioned skill and weapon upgrade system is handled via “Karma” points which are obtained for performing stylish kills and various actions in the game and provide the player some form of customization to their playstyle, which was something that NG3 was sorely lacking. These upgrades often unlock more combo chains for the weapons you are wielding, new skills for combat or provide stronger versions of the three Ninpo abilities that are now in the game. 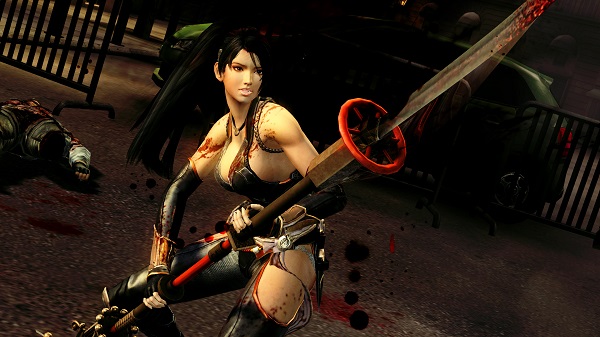 Perhaps one of the biggest highlights, especially for those who found the lack of challenge in NG3 a major sticking point, is that Ninja Gaiden 3: Razor’s Edge has seen a significant increase in difficulty. Enemies enter suicidal states when critically wounded and no longer beg for their life, which means that they can deal high levels of damage if the player doesn’t finish them off quickly and the enemy AI has been revamped as well. So much in fact that almost any foe you face off against has to be seen as a legitimate threat, especially since there still are no healing items in NG3:RE. Instead, the only way to heal is to use Ninpo or Ki with an unlocked skill which makes some of the revamped boss battles all the more difficult and frustrating, however that frustration and difficulty is something fans have been asking for. Of course there is a “Hero” mode that often prevents the player from dying by auto-blocking and avoiding strong attacks automatically. This is great for those who simply want to enjoy the game but may not want to sample its biting difficulty and often terrible camera.

Ninja Gaiden 3: Razor’s Edge retains the various multiplayer modes all held within the “Shadows of the World” option and these have gone largely unchanged. Players can still take part in clan battles where they battle against other players in what can best be described as a chaotic mess, however finding a match, let alone one with a full set of players, is relatively impossible. 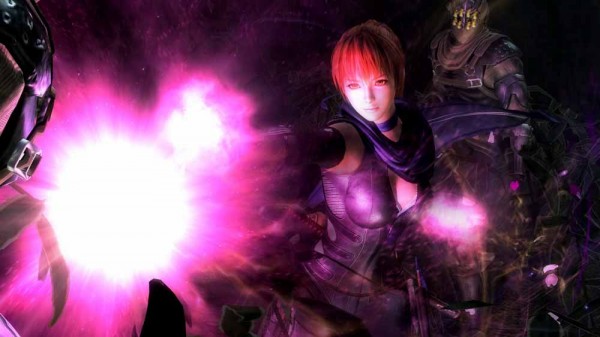 What has been added in is the ability to access a number of Ninja Trials with your customized ninja, Hayabusa, Ayane, Momiji and Kasumi. These trials can be done in co-op and actually these manage to work quite well with a number of active players eager to join. Ayane, Momiji and Kasumi are also playable in the game’s Chapter Challenge mode which has returned for Razor’s Edge. In this mode players are able to run through a level using any of the characters they feel like and this certainly help’s the game’s replay value as playing as Kasumi (a first for the franchise) and Momiji are a breath of fresh air for those who may have grown tired of Ryu and Ayane.

Overall:
Ninja Gaiden 3: Razor’s Edge is everything that fans of the series probably should have been expecting back when Ninja Gaiden 3 was released back in 2012. That being said, the game’s storyline still is very predictable and now various missteps are quite obvious where Ryu’s cursed nature was not properly re-worked to fit with the new attitude of enemies. Still, not only has the game’s combat system been entirely overhauled and expanded but the cruel difficulty has returned for those who want it, and a number of gameplay modes and characters expand the game’s longevity which creates a truly enjoyable experience that was sorely lacking in the original release.