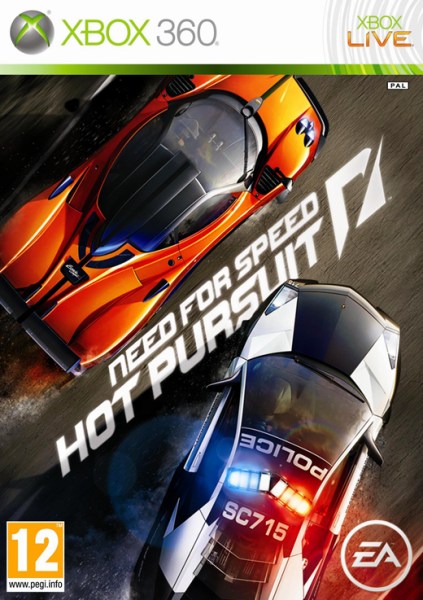 Cops and Robbers is a pretty basic premise for a game, or in this case Cops and Racers, but it is one that Criterion games have taken to heart, forgetting past mistakes of the Need for Speed series and taking it back to basics, in a series of increasingly stressful races that demand that need for speed. It is also Criterions first foray into real life existing cars over arcade simulations so for the fans is Hot Pursuit a burnout, or is it paradise?

To be fair, the game is a lot of fun. It may be arcadey, not all together realistic, but the execution is stripped back and very very tight. Not wanting to tread on any toes, or at least stray to far from what made the first Need for Speed so great almost 10 years ago, they have ignored almost all updates to the series prior and focused instead on a list of meta achievements and stats designed to one-up friends and evoke competition.

Starting the game up, the world map of Seacrest County is immediately similar to their previous title Burnout Paradise and it is not until picking cars that you realise, there is just a bit more detail here- sort of. Criterion have stepped out and inserted real-world cars into an unreal situation. There is a slew of luxury cars to play with from Porches and Lamborghini through to Aston Martin and concept cars or roadsters. The police variation are just as good, with a little less customisation, preferring a new paint job of existing models and some that are completely fictional.

The world map is pretty straight forward: Either start races as a “Racer” or compete to chase them down as the Police. There are three or four different types of courses, either ‘time trials’ where you have to escape in a certain time or catch someone within the limit, Hot Pursuits which allow weapons and have a ‘one v many” approach and the obligatory racers of many cars all trying to come first.

That just about sums it up- quite literally, which is surprising when you consider the depth to play on offer. There are two Career modes and for either the racer or the Cop you level up through 20, grinding ever closer to the Most Wanted level and unlocking harder races and better vehicles along the way. Although simple, with no vehicle customisation beyond some colour, no interaction on the map and some recycled music and maps, it is the weapons and autolog feature that make it worth while. 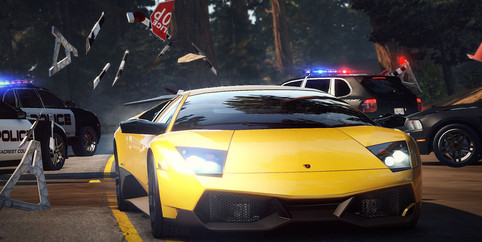 The Autolog is where the game exists, in this constantly updating and always persistent middle ground of online connection but offline racing. Every single race or action in the game is mapped against anyone of your friends who also have the game, and it becomes a consistent a real incentive to keep trying to beat their scores. Rather than just a leaderboard though, the game will actually throw out recommendations and rather than fictional racers to beat in made up race there is always your real world friends on hand. Each player has a wall, and through it you can msg other people of your friends, talk smack and generally let everyone know when you just beat their score by .01 seconds. There are photo options too, but require a camera and do not work with Kinects built in one.

Weapons in the game consist of spikes, radar jams, helicopters and turbo boosts or roadblocks, and despite the rather simple nature of the racing it can become rather strategic at the higher end to figure out when to use an EMP or a well placed spike trap, or combine a Helicopter together with said EMP to send a car sliding into an oncoming row of spikes.

Although Criterion have made a fun game, even more so online with 6 v 6 cops and Racers, which just degenerates into a mass of roadblocks and reverse driving, some issues remain that stop it from being the next big thing: Burnout Paradise really redefined arcade racing, and was so well supported and pure with a lot of content, 3D maps and a massive number of add ons and detail down to the type of races and cars used. While separating itself from the competition, Need for Speed is just a little too simple. There is no car customisation for what the series had become known for, very little music, maps recycle and everything- is automated. Almost every race will unlock a new vehicle, but there is no choice over when or what, you never have to buy cars and online is exploited with lower level players having much slower cars than anyone else in their race. On top there is a only a small variety of race types, that do get ever more complex, but are really just training for online shenanigans. The result is a double edge sword. Hot Pursuit is tight enough that it is easy to pick up and play and never takes itself too seriously. But despite all the achievements and friendly competition, the meat is in hot pursuit weapon take downs with time trials and races, rather boring. 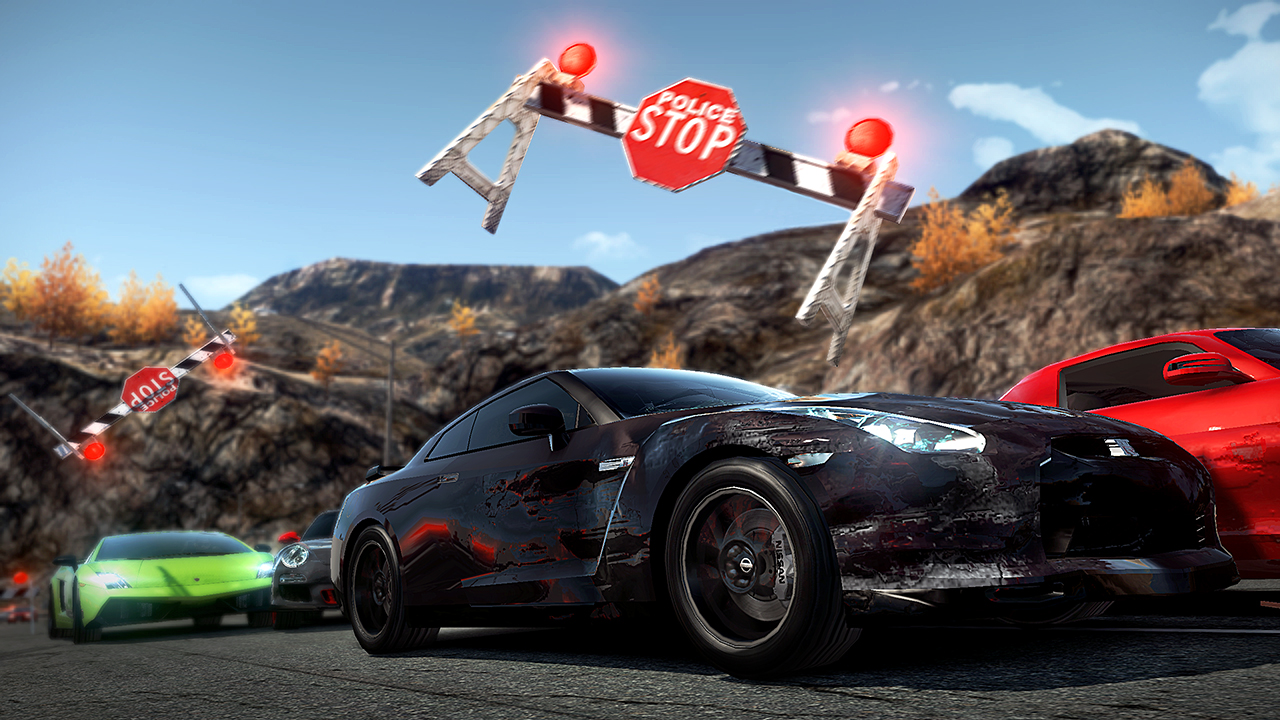 For a game coming out, at the end of 2010 for a series that some people thought had no chance of redemption, Hot Pursuit never tries too hard to overstep itself or even step up to other games from this generation, instead it works and that is good enough for now (until the next one). Perhaps also, in said racing games there is a push back toward minimalist real-world racers over the gangster pimp my ride clones that were pushed out over the last 5 years.

Maps are clean and function either during the day or the night, and although there is morning and evening rides, it can be hard to tell the difference. Rain and thunder act as environmental obstacles and work well, with cars that are responsive to the weather effects.

Criterion play a fine balancing game between what is real or not though, with the underlying theme that Cops are arresting Racers for Speeding- not likely, when the Racer is a crumpled pile of mess, spinning out down the hill.

Yes, in the original seminal racer, Police would actually pull racers over to arrest them and you would see it, now each are as bad as each other preferring the ram me off the road approach. Also, if someone can tell me why a Racer roadblock is comprised of cop cars (when called in), just ruins that illusion a little bit.

On the flip side of these small infractions, the Cars are exceptional and generally stand out from the environment. Instantly recognisable each one at least tries to respond to it’s true to form speed and handling, with some rather detailed descriptions and prices matched to the year the car was launched.

Based on the rather small map of Seacrest County, some areas have snow some desert and some the standard forest and country. The maps are memorable only because they tend to repeat and are all together uninspired. Draw distance also is odd with a strong blur in the background that just blends into mountains or trees that lack colour and depth. All in all the world is serviceable and yet the shiny nice cars stand out against plain backgrounds and shortcuts which are not actually shortcuts and may lose you time (a nice strategy actually that makes you learn the maps).

If the gameplay is stripped back and the graphics are good enough, then the music, needs improving. Only some races specifically have the option to play songs while all the Hot Pursuits have the same repeating “thrill” music that sounds like it was made for a movie car chase, but never quite hits that high. It’s a nice touch adding some suspense and danger to the situation but is at odds to the racing beats, only half of which were recognisable. Good music for cruising though it consists of a mix of soft rock, dance,pop, club and alt music, a far cry from the thumping bass ghetto and hip hop swearing tunes from previous games.

There is simply not enough of it and again, the set list can not be mixed,shuffled or looked at even in the menus or otherwise. Criterion while simplifying the game have removed key choices for the player that allow a more personal experience.

The value of the game comes in how many other friends have the game also. Don’t expect split screen off-line either- this is an online experience as close to a Racing MMO as possible. Hot pursuit is a rent, that can be ground through quickly, but has high replay value and a lot of fun. The is no underestimating the thrill of trying to smash down racers as a cop, while the traps and roadblocks offer some tactical choice about when and how much to deploy them.

Sadly as final mistep, unless you have bought the game with a code to get online, renting may produce the problem of not being able to play due to the fact that despite having an XBOX Gold membership you need a code to log into the autolog feature. The game offers 2 days free but then times out which is rather disgusting considering. This means you can rent it, but not play online anyway (unless you are lucky enough to have the code stolen). It is not a code on the booklet and is frustrating that a separate login and cost is associated to play EA games online now. 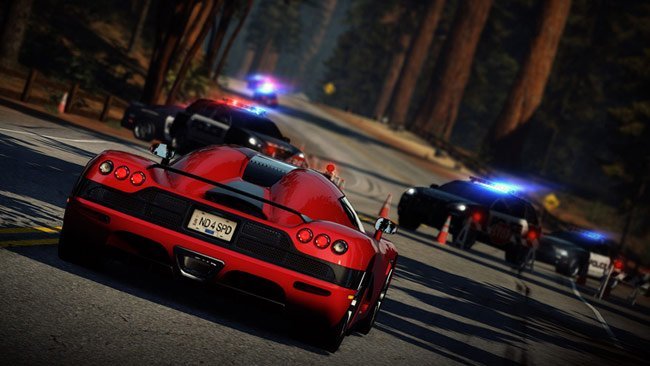 Need for Speed is a return to form for the series, introducing younger players to what made the first game great, so many years ago. Despite some teething issues, which really shouldn’t occur in this day, even if it is a franchise re-boot, the gameplay is solid and a lot of fun. The need for speed is back- and the pursuit is hot.