Who doesn’t dream of winning the lottery – with the possible exception of past mega jackpot winners of course! That said, even Donald Trump himself might be swayed by the 488 million dollars of virtual prize money at stake in the latest Mystery P.I game from puzzle specialists PopCap, Mystery P.I: The Lottery Ticket.

At the start of this installment we discover that ol’ grandma Rose has correctly picked the lucky numbers needed to snag a frankly staggering 488 million dollar prize in a lottery draw. All well and good, fantastic in fact until the forgetful senior realises that she has unwittingly lost her ticket. Talk about some serious bad luck! Only grandma Rose will know the sweet pleasure and pain of what must have gone from the elation of this life changing, potential best day ever to the deepest despair in a heartbeat as the reality of her faux pas sets in! Although such a loss is enough to test even the most grounded of people thankfully grandma didn’t lose her faculties along with the winning slip and hires a private investigator to find the lost ticket before time runs out. And here’s where the player steps in, asking for little more than thanks in return for your professional help… okay who am I kidding – your fee for this job, only 20 million dollars! As what must be the most expensive private investigator in history you have just 12 hours to find the missing ticket. Did I mention your reward for doing so is a whopping 20 million dollars? Better get cracking then… 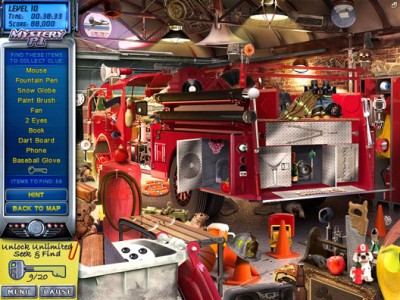 Put simply, the objective of Mystery P.I: The Lottery Ticket is to locate hidden items dispersed throughout the city to progress to each new level. At the end of each level you are also required to seek out the hidden jigsaw pieces, of which there are 20. In doing so you will complete the puzzle to unlock the bonus stage which in turn unlocks the final level where the missing lottery ticket can be found, aka pay dirt!

Mystery P.I goes easy on you at first by giving players a fairly short list of items to find within different locations within the city. The earlier stages each require you to find around 20 different objects per level to progress onwards. This increases to around 80 plus on later stages. Despite the relatively high number of objects to locate down the stretch the game never gets boring and instead compels you to keep hunting as the timer steadily counts down to the twelfth hour. Even at it’s most challenging, this addictive little scavenger hunt never devolves into a needle in the haystack affair and rewards players for quick thinking and accuracy by giving extra points if you find the items quickly. 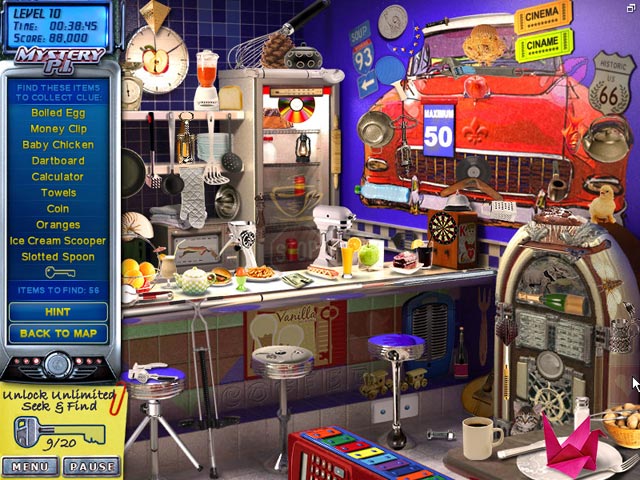 PopCap certainly aims to challenge even the most seasoned of gamers and puzzle game veterans. Players may initially find success by scanning locations for collectable objects by their individual colours but time is quickly called on that tactic and, as is to be expected from any good puzzler, as the game progresses so do the complexity of the levels. For example, some areas later in the game are based underwater which not only provides objects with a unique new perspective but, as with the lounge levels, means that objects are incredibly well disguised with many being of a similar hue to the background scenery and very difficult to spot at first glance. Furthermore, as players progress more and more random objects appear making it even more of a challenge to find the ones needed. There are hints available to players at any time although these come at a price with 7500 points being deducted for each one used. That said the actual learning curve isn’t too steep and the game does a great job of easing the player in to the action and remains fun throughout it’s 20 levels.

After finding the required amount of items needed to progress to each new level you will be presented with a mini-game in the form of a memory test. This can get a little repetitive but each memory game smartly requires a you to not only group objects that match by colour but also by use. For example, a tennis ball and a tennis racket or a horse and a horse shoe. After finishing each memory based mini-game you will be given a piece of a jigsaw puzzle.  PopCap have also included additional mini-games within each of the city’s different locations giving players the option of finding up to 20 cleverly hidden keys which can be used to unlock bonus game modes such as Unlimited Seek and Find. In Unlimited Seek and Find players have no less than 2000 hidden items to find within each of the locations that appear on the game map (including bonus areas) increasing the longevity of the game considerably.

Its fairly commonplace for hidden object games to re-use locations and true to form Mystery P.I: The Lottery Ticket does exactly this. However, I actually found this helpful from time to time as revisiting certain areas enabled me to find keys that I missed upon my first visit. Mystery P.I certainly gets a thumbs up for it’s clever re-use of existing locations in this manner and as repeat play reveals you never seem to find the same item in the same location more then once or twice. This not only introduces a random element into the game but also requires that players continue to rely on skill and not memory, something which has marred other hidden object games in the past. 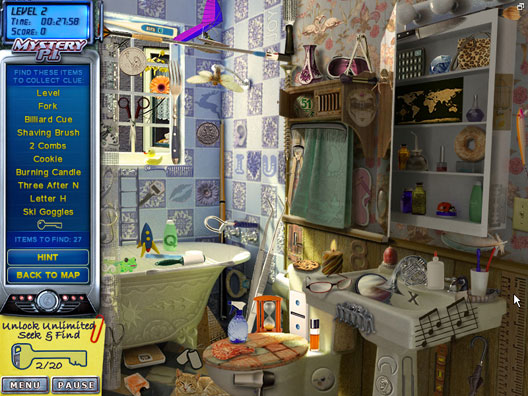 Occasionally the game can get a little testing when it comes to finding certain smaller objects especially as there is a tendency for them not always register on your first mouse click, particularly if they are surrounded by other items. Sometimes it can take several attempts to collect an object with each previous click costing you the valuable points needed to amass a high score or purchase clues. PopCap have come up with some pretty ingenious items for you to find over the course of the game and have really gone out of their way to try and fool players and keep them guessing throughout. During one of the levels for example you have to find five spots which I incorrectly assumed would be five different spots… In another location you are required to find two bats, turns out only one is a mammal! Mystery P.I definitely encourages out of the box thinking with some fairly wild resolutions.

Overall The Lottery Ticket is a highly enjoyable entry into the Mystery P.I series. The locations are varied and visually great and there are even some catchy tunes that help immerse you in the action without being overtly cheesy or becoming grating, surely a rarity amongst puzzlers! Whilst personally I felt the game could have benefited from a few additional levels this is predominantly because I was enjoying the experience and was sad to see it over so soon.  Although the object placement appears random in the main game the replay value after the ticket is found really hinges on whether the player has been able to find all twenty hidden keys to unlock the bonus Unlimited Seek and Find game mode and most importantly whether the player is having fun.  With unexpected twists and turns, an engaging storyline which keeps you guessing and fun and quirky mini-games, Mystery P.I: The Lottery Ticket proves to be great fun and a solid addition to the series from PopCap. I’d certainly encourage puzzle fans to give it a spin to see if poor ol’ grandma Rose ever becomes filthy rich ol’ grandma Rose! Hopefully the 20 million dollar reward for finding the missing lottery ticket won’t see this particular Private Investigator go into premature retirement…