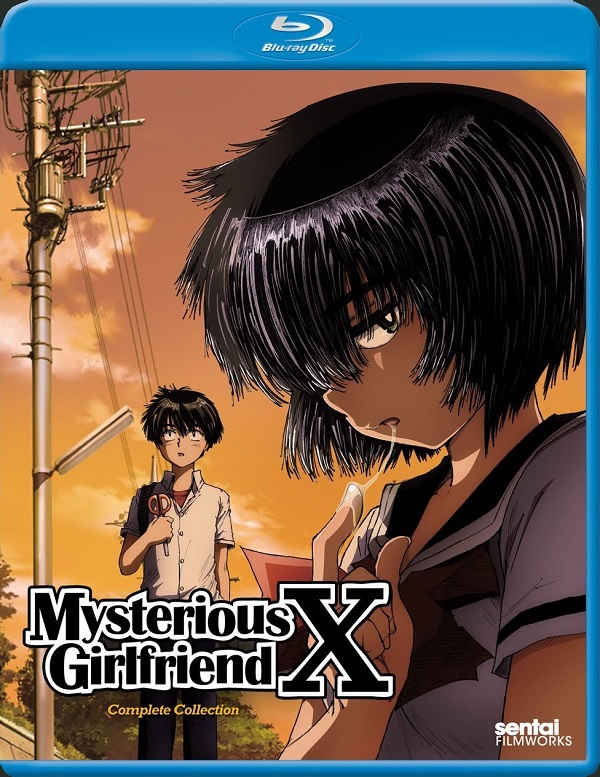 Overview
Teenage romance is difficult to portray and often in anime this romance is taken to such an extreme that it is either devolves into a harem, relies on heavy fan-service or goes the omnibus route to create multiple endings. Every once in a while a romance story is created that features a great cast of characters or a unique twist that helps make the story worthwhile. As for Sentai Filmworks’ release of Mysterious Girlfriend X, this unique twist revolves around something unexplored in the industry so far. The question is, does this make the series worthwhile?

Story
Akira Tsubaki is a rather average high school student. He isn’t a loner and has a number of male friends amongst his classmates but doesn’t stand out in any special way. However during his second year of high school a new girl named Mikoto Urabe transfers into the school and is seated next to him in class. To call Urabe strange would be an understatement as she barely introduces herself to the class, sleeps in-between classes, blows off any interactions with those trying to be friendly with her and hides eyes behind long bangs. 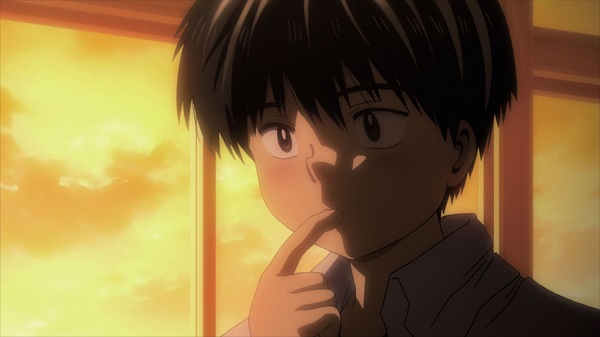 Because of this off-putting anti-social behavior, most of the class begins to ignor    e her existence. Tsubaki is the one exception, though at first this may simply be because he sits next to her in class. However one evening he finds Urabe slumbering alone at her desk long after school ended. He wakes her up to make sure she gets home okay, but then Tsubaki does something not only strange, but a bit disturbing as well. After Urabe leaves, he finds himself focusing on a small puddle of drool she left on her desk and for unknown reasons, licks it.

Even stranger, not only does he find himself liking her drool, it actually tastes sweet to him. Things become even more abnormal as Tsubaki falls ill a few days later, so ill in fact that he seems to be getting sicker by the day. Oddly enough, Urabe seems to understand his affliction and ventures to his house to explain that because he tasted her drool, the two have formed a bond. The reason that he is so sick is because his body is going through withdrawals after not tasting more of Urabe’s drool for a few days. 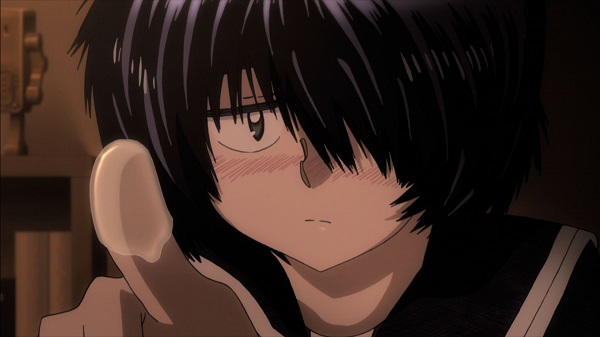 You see, the drool bond between Urabe and Tsubaki forms a slow relationship between the two where they become girlfriend and boyfriend with the two sharing a routine every day. This routine of course sees Urabe giving Tsubaki some of her drool, usually on the tip of her finger, after school. However this odd beginning eventually begins to develop into a bit of a legitimate relationship as the two’s drool bond is explored over the course of the series.

Quickly it is shown that something is going on between the two and Urabe may be far more mysterious than anyone could have thought. Urabe’s issues with privacy, ice-cold nature and habit of only wanting to do things on her terms force their relationship into something that is so slow burning it is barely lit. Considering the series is called Mysterious Girlfriend X, they clearly have the mysterious part down with how Urabe acts, unfortunately nothing is ever explored in the series as to why she is this way or what this actual drool bond means.

This gets even more mysterious, and frustrating thanks to the series’ slow nature of going nowhere, when viewers factor in the fact that Urabe and Tsubaki can transfer their feelings and thoughts through the drool bond. On multiple occasions Urabe tests her drool on Tsubaki to see how he will react to various stimulations, often without his knowledge, and because of these often lewd situations his body always reacts accordingly. 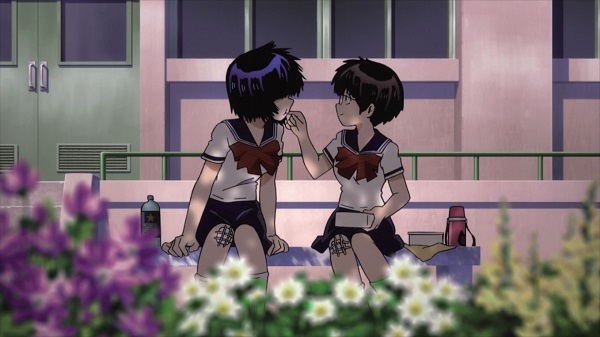 Mysterious Girlfriend X is an odd series in more than one way. It primarily focuses on a small cast of characters and although some relationship aspects are explored with Tsubaki’s friend Ogata and Urabe’s eventual friend Oka, the spotlight throughout the series is Urabe and Tsubaki and their drool bond. The series’ strange take on the two’s relationship is… new to say the least and the drool aspect isn’t as off-putting as it sounds thanks to the amount of exploration it is given throughout the series. That being said, the crawling pace of the series will likely be more problematic than anything else as, although it is clear that the two certainly share a deep bond, there is a difference between a slow build and purposely going nowhere.

Visuals
One of the most striking elements of Mysterious Girlfriend X, outside of the drool of course, is Hoods Entertainment’s decision to give the anime a retro animation style. Every visual aspect of Mysterious Girlfriend X feels like a combination of modern animation techniques stylized like what anime fans in the 1980s were experiencing.  This is done through subtle design decisions and old-school character designs. As for the characters themselves, they are nicely designed though a bit run of the mill with Urabe begin the only exception. Thanks to the art direction, Urabe’s often obscured expressions work amazingly well and many of the best scenes in the series are those that feature Urabe’s uncovered face or her reaction to an event.

This retro element continues into the anime’s background designs as they are nicely detailed and whenever Tsubaki experiences a dream sequence, these fantastical dreams are elaborately animated and quite a treat. There are also a number noteworthy symbolic scenes implemented throughout the anime which work well. It is also worth noting that despite a few modern pieces of technology appearing here and there, viewers could easily place this anime somewhere in the 70s or 80s thanks to the animation studio’s devotion to the series. 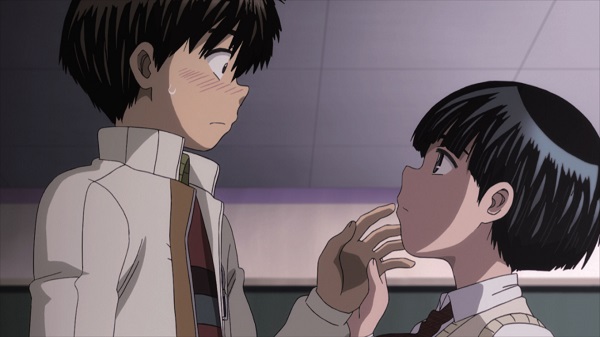 Now one thing that Mysterious Girlfriend X handles quite nicely is the fan-service element. While there is quite an abundance of fan-service throughout the series, it is done in a tasteful manner. Sure there are a lot of panty shots thanks to Urabe’s panty scissors but this only adds to the oddity that is Urabe’s character. Any semblances of nudity are still shadowed out so while outlines can be seen, no actual nudity is presented. That being said, there are plenty of lewd sequences throughout the series and the drool aspect is highlighted throughout the anime with the animation style usually peaking whenever the often glittering liquid is involved.

Audio
With Mysterious Girlfriend X Sentai Filmworks has provided their own English dub to the series and have also included the original Japanese voice track. As far as the English dubwork goes, Josh Grelle simply feels like an inappropriate voice actor for Tsubaki. Either through poor voice work or directing, his character sounds much older than a high school student should and although Urabe’s voice actress Genevieve Simmons sounds a bit too old for the role as well, her voice works considering Urabe’s character is meant to by mysterious and eccentric. It is worth noting however that Genevieve puts a lot of emphasis on the –kun honorific in Tsubaki’s name, so much in fact that it often doesn’t reflect the tone of what she is actually saying. 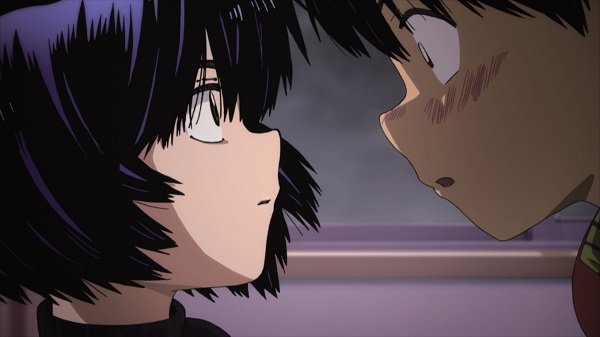 Alongside the voice work the anime has been given quite an memorable sound track with a number of great background songs used throughout the series to accentuate the events on screen. As far as opening and ending themes go, the opening “Orchestra of Love” and ending “Afterschool Promise” are both handled by Ayako Yoshitani, Urabe’s original Japanese voice actress. These songs are nice enough, but ultimately are unremarkable outside of the animation they are set to.

Extras
As far as bonus features go; Mysterious Girlfriend X contains a rather basic set of extras that are barely worth noting. The discs contain the Japanese promo videos and a Japanese preview of the series, clean opening and ending animation sequences and trailers for other Sentai Filmworks releases. The Blu-ray discs feature Urabe in fan-service pose on the top side, so that’s something.

Overall
Anime is certainly an interesting medium isn’t it? Where else can you find an adolescent love story centered entirely around drool? Mysterious Girlfriend X is a one of a kind anime series that tackles a number of relationship aspects from a brand new angle and features beautiful retro animation designs that look wonderful on Blu-ray. Unfortunately it’s crawling pace, inability to provide meaningful development, and hit and miss voice acting make this strange series one with plenty of style but not much substance… outside of drool of course.