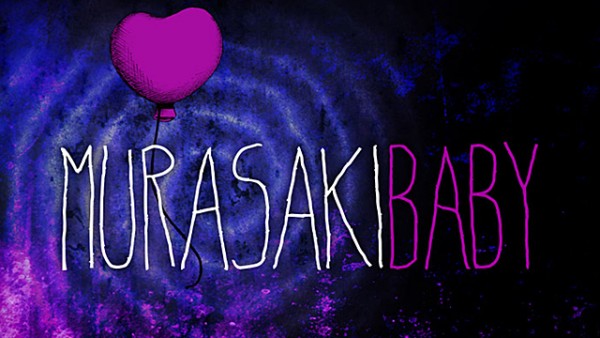 Young children are frightened of a lot of things, things that aren’t real, things that they don’t see and understand in quite the right way. Murasaki Baby tries to take those fears to an adult audience by putting players in contol of Baby, a very young girl who wakes up one night to find that her mother is gone. Players must guide Baby and her balloon through a series of odd locations in a quest to find her mother, using the touch screen to drag Baby and her balloon along. 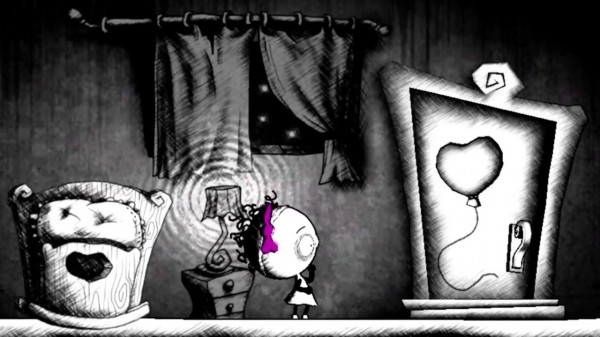 Developers Ovosonico bill themselves as creators of “original, unconventional and artistically crafted” games. One look at Murasaki Baby is enough to back that up, as nigh on every element of the game stands out for its strangeness. The art style has just about every reviewer name dropping Tim Burton, the control scheme is so purely touch based that there isn’t even a pause button, and Baby has her mouth on her forehead. Creepy. The game was last seen as part of Sony’s E3 presentation, and was billed as something of a major event for the Vita.

In true Vita exclusive fashion Murasaki Baby is a tad obsessed with touch screen controls. Players use the front screen to direct Baby and her balloon, whilst the back screen is used to scroll between the different coloured backgrounds. The controls make for a pretty unique set up that offers cool puzzle solving oppurtunities, but it isn’t without flaws.

Players drag Baby along by the hand, and whilst it’s an usual mechanic that feels right for the character , the fact that Baby trips over if you tug her along too quickly  moves from cute character work to irritation  when combined with some of the other control issues. 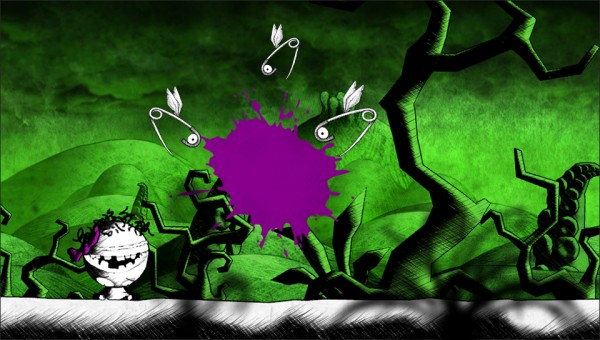 Baby’s balloon is a stand in for a health bar, and if it gets popped then she’ll burst into tears and the checkpoint will reload. The balloon is vulnerable to enemies and to environmental obstacles,  so the player has to take control of it by dragging it around the screen. Attempting to manoeuvre Baby and her balloon simultaneously can lead to some interesting finger contortions!

As Baby progresses through the sinister world she will meet other weird and wonderful creatures. Some, like the flying safety pins, are enemies and others are intensely odd things that eventually become allies of a sort. Baby can even unlock other backgrounds by popping the balloons that other characters carry.

The backgrounds are a key part of the game’s puzzles, as every one has its own unique power that can be activated by tapping the back screen. As the game progresses more and more backgrounds are unlocked, allowing for more complex puzzles. To start with players can only frighten Baby (and whatever else is on screen) by unleashing Jack-in-the-Boxes, but that is quickly joined by the power to make the wind blow, lightning strike etc. Most of the powers are elemental, and combining them to solve the puzzles can be a lot of fun, especially when Baby is clearly pleased with the result. 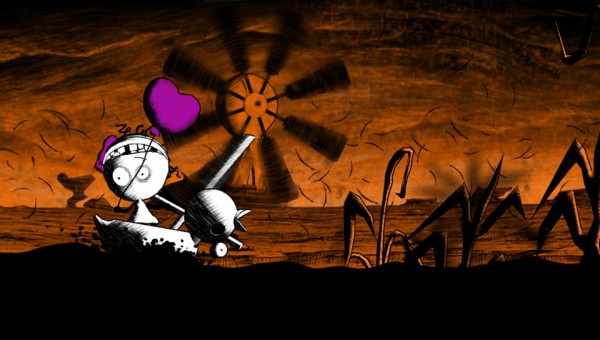 Flicking between the environments to solve puzzles is a neat mechanic, but the enjoyment is undermined by the game’s reliance on touch screen controls. There are moments in the game that require speed and precision in four different tasks: changing backgrounds, activating powers, moving Baby, and protecting her balloon. I have short fingers and small hands, and eventually had to resort to resting the Vita on my legs so I could free up both hands to control the game. Not everyone has my midget digits, but if you do, fair warning- this game isn’t entirely handheld. The controls are smooth and responsive about 80% of the time, and the checkpoints are generous enough to make the few hiccups in that 20% minor irritations at best.

The first thing that hit me about Murasaki Baby was the unnerving presentation of the main character Baby. She has a mouth on her forehead, and makes creepy little noises throughout the game. She’s obsessed with her balloon, and will cry and wail if it gets away from her, or make terrified noises in response to certain locations and objects. That she displays different levels of fear is a nice touch, and her mewling cries for her mother manage to be both eery and innocent. Despite her odd appearance her childlike qualities feel very real, and its easy to suddenly feel responsible for her care. 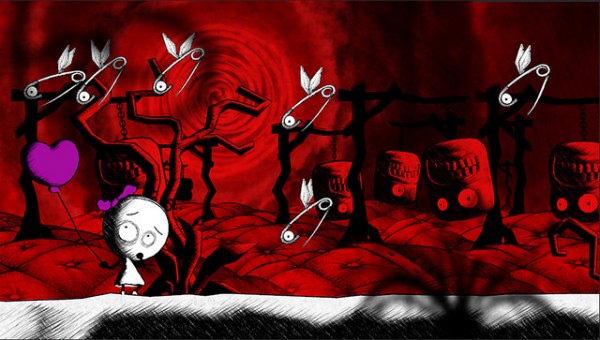 The art style is clearly something that stands out, with a sketch effect foreground and a variety of themed and coloured backgrounds. Murasaki Baby teeters on the edge of The Uncanny Valley, and the design of all the characters that you encounter certainly enhances that characteristic feeling of unease.

Baby’s cries can get irritating, and it is definitely a game that requires headphones; these noises aren’t going to be appreciated by the people sitting next to you (and that’s partly a compliment to the game’s atmosphere).

Murasaki Baby is an odd one. It has a lot of unusual ideas and the sound and visual design are very strong. It has a unique presentation and feel to it, and if you can bypass the issues with the controls then there is an enjoyable experience to be had. At 3-4 hours long it’s right in the Goldilocks zone of length to price ratio,  and it even has the odd touching moment to flesh it out a little. It isn’t a defining moment for the Vita by any means, but an interesting one nonetheless.