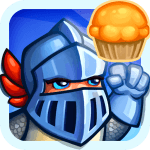 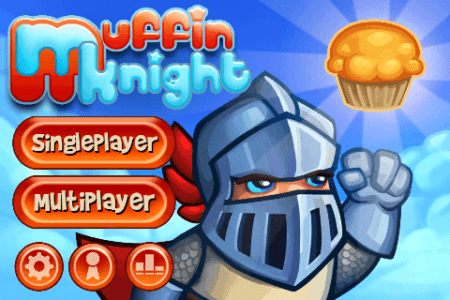 Personally if I was a young boy and a fairy turned me into a knight I wouldn’t be too fussed with transforming back, I mean the knights get all the girls right? Anyway, in a magical land far, far away, a boy does just that. He manages to scatter all a fairy godmother’s magical muffins throughout the land and she gets a little annoyed (but not a lot) so she sends him out to retrieve them all. The game has a distinct feel and sound of childhood fairytale but with a Shrek-like twist on all the characters making it a great comedic romp for all ages. 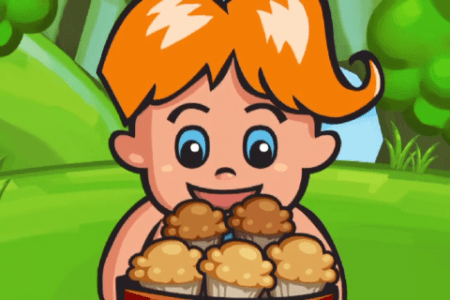 The gameplay is easy to pick up in a few seconds, a bit harder to manage to pull off well. You’re on a small level, avoiding creatures and trying to gather as many muffins as possible. With each muffin you turn into another character with another attack mode, although the order is random and some of them you may dislike while others are awesome and you won’t want to lose.

The controls for Muffin Knight are fairly simple, even for me, given that I tend to see the word ‘platformer’ and get nervous. Platformers’ grasp on physics has left me scarred in the past. Will my little avatar jump too short or too far? Oh no I double-jumped and over-compensated and now I’m watching him/her burn alive. Damn it! Now I have to do the whole thing again. Muffin Knight didn’t have this problem, primarily because the platforms themselves are quite simple; the game is less based on the platforms and more on your tactics and how you get to know the character’s special powers. 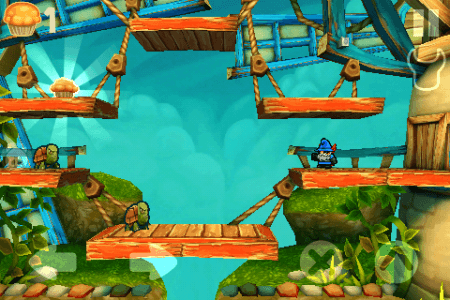 The powers range from shooting in front of you, to swiping at people around you, to laying little rainbow traps (unicorn poos), and finally nuking the whole damn map. It seems that you are granted characters at inopportune times sometimes, like getting a damn ‘Z’ piece for Tetris. Then it just becomes a giant race to the next transition. That said, the goal is to collect as many muffins as possible, not about killing the small furry things that run at you, although that earns you XP, it isn’t worth nearly as much as a muffin. 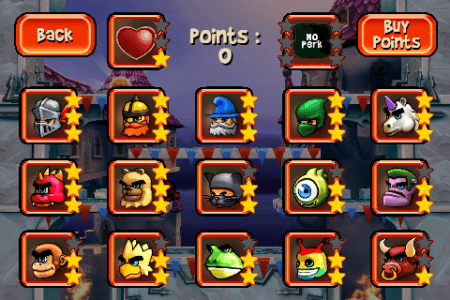 I know that my favourite was the unicorn, because I basically just set up a whole bunch of mines (poos) around the map and then went about my business without too much concern. In my opinion it was so much better and easier than spamming arrows or lightning bolts and basically gave me a whole bunch of breathing room. That said, the fact that you can’t choose your character was good because it made me try different characters and made me learn how to use them. And if I had been left to my own devices I would have used the unicorn constantly and where would the fun be in that? 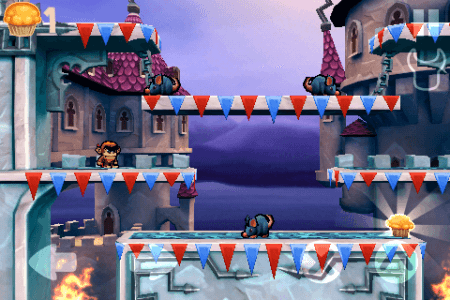 I did have an issue with lag in the beginning of the game, and usually just in the menu screen. Although I’m not sure if it was just my phone deciding that life was too hard. However, since it didn’t affect the gameplay once I got into it, it wasn’t that much of a problem.

There are currently six levels but more are promised soon. The amount of levels don’t impact the game too much though, you can play pretty much any level you want to collect all the muffins and XP you can, they just get more platforms and a higher XP multiplier the higher you go.

You can also upgrade your lives, which costs ten points, which means you either save up a crapload of muffins or you buy points in game. I tend to not buy anything in game with real money, but for those of you out there who don’t have the patience or time to save up this would be a good option.

Visually Muffin Knight makes me long for simpler times when the television was my God and food was something that magically appeared in front of me. It’s all cartoony and cute but also mature (but not too mature, cos that would be gross) and the developers have obviously spent time and effort on the levels and backgrounds to make it a really great looking game.

The soundtrack matches the visuals, its what you’d expect from a kids show but then the sound effects remind you that this is no usual kids game. Every time you transition the fairy godmother says what creature you’ve turned into in her little old lady voice. Plus the sound of a unicorn pooing is enough to remind you that this ain’t no land of Oz.

This is a really enjoyable game, the controls are simple enough to grasp but require talent and practice to really get going on which comes with time and patience that is quite easy to have with this game. It’s cute as, and very addictive.

I give Muffin Knight