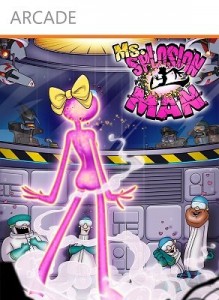 What would you get if you gave a Red Bull laced with Speed and Ecstasy to a cheerleader suffering from ADHD?

Likely one of gaming’s most unique – and annoying – characters, she takes after the star of Twisted Pixel’s earlier quirky platformer, Splosion Man.

Maybe it’s because I grew up in the SNES days, the golden age of platform games, but I have always loved platformers. The market was flooded with them back then, much like FPS games now. Time has filtered out the duds; only the truly great ones were spared from the folds of obscurity. In the last few years we’ve seen a resurgence of 2D platformers, and due to their simplicity, the advances in technology since the SNES, and the familiarity gamers have with the genre, developers have been able to experiment with new mechanics within an old context.

Recent fantastic platformers like the original Splosion Man, Braid, Limbo, The Adventures of Shuggy, The Misadventures of PB Winterbottom, and of course Nintendo’s 2.5D revivals of Mario, Kirby and Donkey Kong, all feel like classic platformers at heart while allowing developers to implement fifteen extra years’ worth of game design principles. 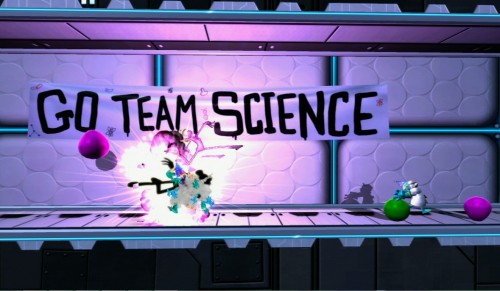 To keep them recognizable from the rest, a good platformer is one with an interesting context and unique mechanics related to that, and Ms Splosion Man gets thumbs up for both. The character herself is enough to warrant a playthrough, or at least a demo. She’s loud, annoying and full of energy – but I guess you would be too if you were made of explosions. She’s a walking stereotype of a teenage girl; pink, gossipy, obsessed with shoes, and relates everything back to pop music.

The game begins as the scientists of the Big Science Lab finally capture Splosion Man. As they celebrate, some drunken lab guy spills wine on a fancy looking machine, the sparks ignite and with the special ingredient of a hair ribbon, Ms Splosion Man is born. Quickly trashing the party, she storms through the science facility sploding everything and everyone, to find a way out and rescue her man. 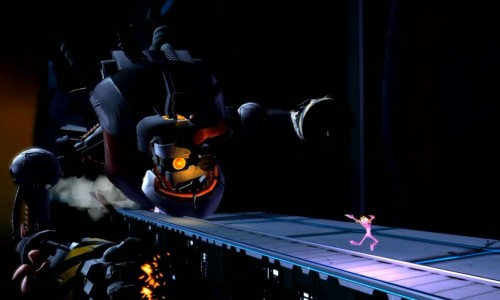 There isn’t a whole lot to playing the game. The controls will tell you that: thumbstick to move, every other button to splode. It’s pretty limited, but that’s not necessarily a bad thing. It tightens up the gameplay, removes extraneous elements and shows that complicated isn’t always better. The variation comes through clever level design, which leaves no use of Ms Splosion Man’s single ability unexplored. You splode to jump, to destroy stuff, to move stuff, and to launch yourself from barrels, a la Donkey Kong.

There’s little to explore outside the main path through each level, but unless you want to look for the hidden collectible shoes, or secret exits, the game encourages players to fly through quickly. Having only one button that does all these things leads to some clever problems to solve; for example, you may need to jump, but sploding to jump will shatter the glass platform beneath you. Or conversely, you may need to break a platform to drop down, but doing so will make you jump into danger overhead.

It’s a very fast-paced game, and precise timing plays a large role, for better or worse. Play regularly involves chains of splodes in precise spots, and one misstep can result in a restart. These can be a lot of fun, but all too often the quick pace leaves too little room for error. Mess up one splosion, and you’ll redo the whole chain again, and sometimes several chains. It gets pretty hard pretty fast – by the end of the first world, I was struggling along – so fail you will. A lot. And repeat the same sections you will. A lot. 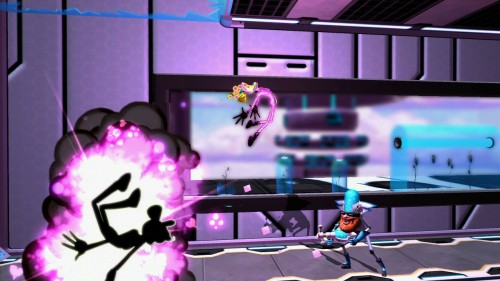 But with the frustration comes the immense satisfaction you’ll get for completing each level.  When things are going right, and for the first few times things go wrong, the game is an incredibly fun platformer. After repeated restarting, it gets old.

Thankfully, the developers apparently saw this issue, and gave Ms Splosion Man the ability to “cheat on the game”, and skip to the next checkpoint. But doing so has its consequences – not only will you receive no score for the level, cheating will make your butt look big. Literally.

The most interesting elements added to change things up are the human “helpers”, unwilling though they may be. Scientist Mandy can be hijacked as a meat shield, protecting Ms Splosion Man from lasers and such, while Wilford, a wheelchair-bound old geezer, can be pushed along to clear your path, functioning as both a shield and a weapon. Both have a lot of personality in their design, and are fun to exploit.

A generous helping of multiplayer levels are included as well – in addition to the 50 single player levels, there’s another 50 separate levels for two to four players. Not a lot is different design-wise, with the only difference in abilities for multiple players is that sploding next to another player will send them flying. This is used mostly to help one player reach a high ledge, then having them hit a switch or something that allows the others to progress.

It’s just as fun as single player mode, and having a unique set of so many multiplayer levels is a very nice feature. 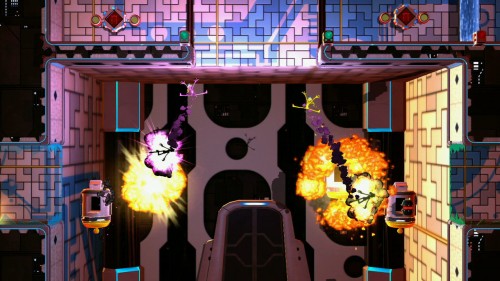 The presentation is where Ms Splosion Man really shines. Her zany character is portrayed fantastically through some awesome animations. She has more run cycles than most characters, each illicting at least a smile. Sometimes she skips, sometimes she skates, or dances, or flails, or chats on an imaginary phone. As she falls she might strike a model pose. She can never stand still, doing star jumps or dancing if left motionless for too long.

Another cool little graphical feature is the little silhouette left behind after each splode.

Normally I can’t think of much to comment on with the soundtrack in games, but Ms Splosion Man would not be imbued with the same level of personality if it weren’t for the great audio. Each line she speaks is entertaining, quoting a girl-power song or movie, or just a random female cliché (“Who left the toilet seat up again?”, “Not tonight, I have a headache”). Somehow her constant babbling treads the fine line between funny and irritating, without ever dipping too far into irritating. She’s hilariously maddening, but I would completely understand if other players couldn’t stand the game because of her.

The music is suitably high-energy and very catchy, particularly the main theme, which is a version of the original Splosion Man theme, rendered as a female pop song, and each level’s music also encourages you to run through quickly.

Other music is just downright weird. Listen closely during the pause menu, and you’ll hear some strange song about going nuts for donuts. Climb into the porky Mandy shield, and a faux-love song about meeting a girl named Mandy plays. And the insults are piled on if you cheat on a level, with a song constantly reminding you of your enlarged posterior. 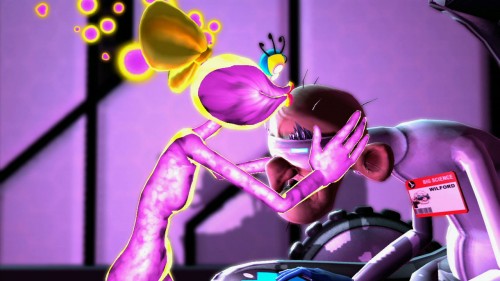 Hate her or tolerate her, Ms Splosion Man is a damn fine specimen – of platforming, that is. She may seem little more than  basic, but she’s so well dressed and highly polished that it’s more a case of “pure” platforming. It presents a definite challenge, but if you have a high tolerance for frustration, Ms Splosion Man herself will be there to keep you company through the whole ordeal. Whether or not her presence is a good or bad thing is up to you.

I give Ms Splosion Man