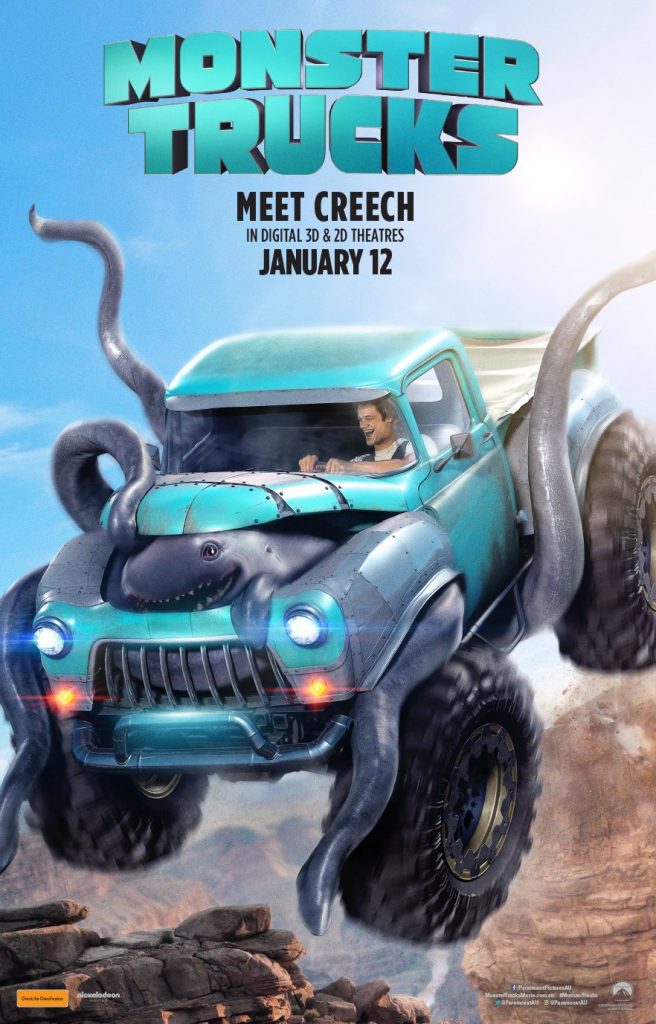 I’ll be honest with you, the trailer for Monster Trucks was not the epitome of cinematic sizzle which I have seen. There wasn’t too much in it that really got me excited or made me feel that this film would have something I would have considered worth seeing. That being said, I tried to put aside my first impressions when I went in to see this film with as open a mind as possible. Who knows? Perhaps this film with a pun title about Monsters(in)trucks would actually turn out to be the next E.T.? Read on, dear reader… 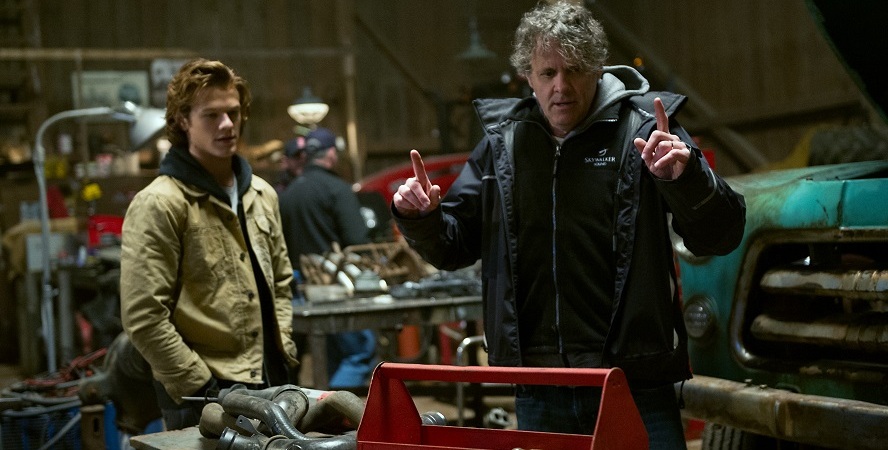 The film starts off with oil miners in North Dakota attempting to bore a new hole for an oil rig. Their efforts hit a snag when the shaft they’re digging pierces a body of subterranean water and the pressure damages the rig as well as forcing several creatures up the pipe and into the site where they wreak some havoc. Most of them are rounded up, save one, who escapes into the junkyard where the film’s protagonist, Tripp Coley (Lucas Till), finds them. After a brief interlude where Tripp attempts to get rid of them, the creature finds its way inside a truck where it turns out they can effectively function as a living motor for a vehicle. Both Tripp and the monster have to work together in order to rescue the captive monsters from the clutches of an evil oil corporation. 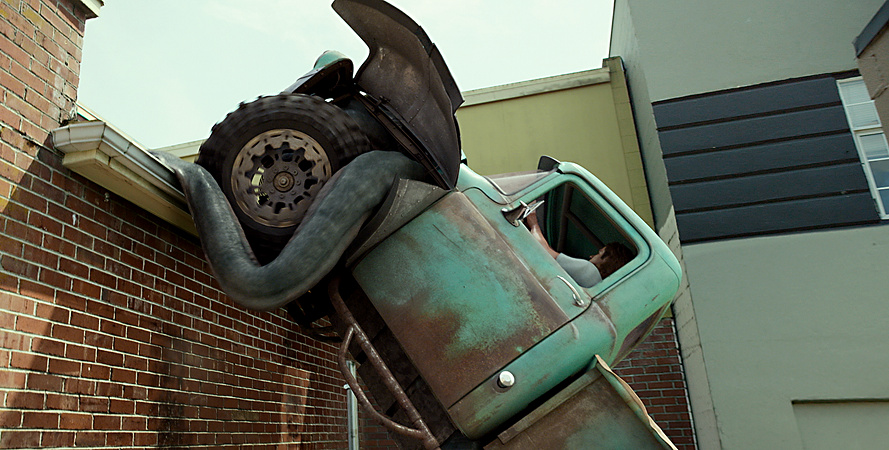 The biggest problem with a lot of children’s films in the modern film landscape is that writer’s too often dumb everything down, ostensibly to make things simpler for their audience. This, I would argue, is a big mistake. It’s one thing to have the characters, the action, and the narrative follow along a simple and clear path for a child to allow a developing mind to follow along and maintain their interest… BUT, it’s another thing entirely to completely remove all thematic concerns and ideas from a story. Unfortunately, this film falls into the latter with the writing being about as deep as a puddle. All semblance of any meaning which can be drawn beyond the film has been stripped away for mediocre action and comedy involving trucks and vehicles.

This effectively means that our protagonist character, Tripp Coley, is a complete cardboard cut-out of a character who makes decisions and pursues actions with little to no rhyme or reason. His rapport with the creature feels entirely forced and arbitrary with the relationship between protagonist human and monster largely being based on a really contrived set of circumstances. The monster itself is also very bland in terms of its personality and even now I could not tell you one distinctive thing about its relationship with Tripp or anyone else. They both end up being really boring, really unimpressive characters. 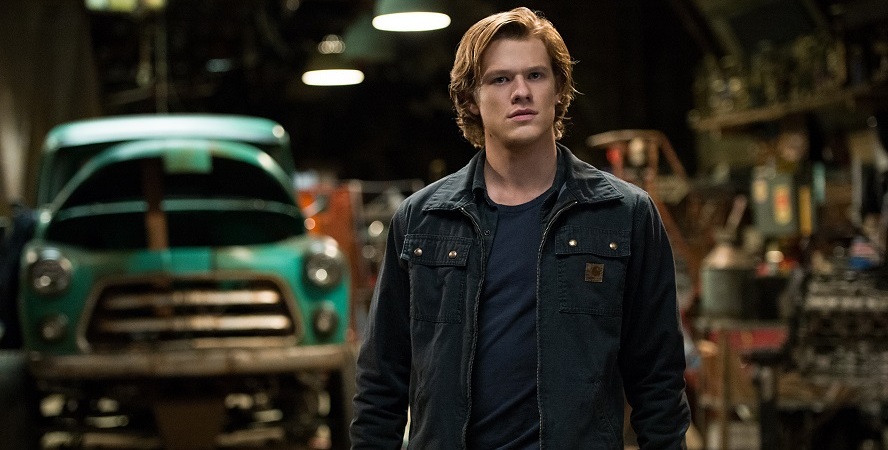 The story follows a similarly contrived plot points with the character of Tripp’s father (Frank Whaley). The character’s relation and presence makes no sense considering how little impact his story arc has to the plot or even the protagonist. He’s suddenly brought in as this possible narrative link between the film’s main antagonist and the protagonist but ultimately proves to be just as disappointing a character to the audience as he is a father to Tripp. Mostly absent with hope of something better but ultimately very disappointing.

There is a faint glimmer of a character depth between the oil company exec (Rob Lowe) and the geologist (Thomas Lennon) where the former makes reference to the latter’s loose adherence to ethical standards while working for the company. It’s delivered in a throwaway line which ultimately doesn’t get explored further throughout the film but, gosh, it gave me the hope of seeing something interesting happen on screen between the human personas. Alas, it was not to be as the film decides instead to double down on its boring protagonist and his boring relationship to an equally boring protagonist creature. 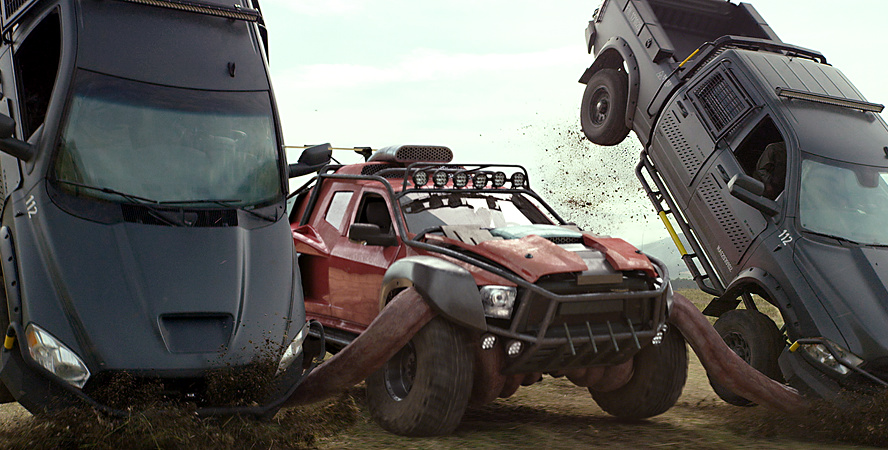 Off the bat, I’m gonna say that the film’s animation isn’t absolutely terrible. The trailer features some less than stellar examples and they are certainly present in the film itself, but, by and large, I feel that the animators largely got things right more than wrong. The worst that happens when you see an actor attempt to interact with the creatures as you can clearly notice when they’re miming their actions.

The creature design wasn’t particularly inspired either with the monster largely remaining drab and muted in colour throughout the film. The only time, I felt, that the monster’s design became interesting was during moments when its body glowed with bioluminescence. Its body would light up with awesome glowing designs and you could see this awesome display of light which showcased a beauty which is both otherworldly enough to not set off an uncanny valley effect.

The film’s soundtrack was largely passable without leaving too much of an impression either way. The tracks perform their role of backing up the emotional swings of the film (as they try to be) but doesn’t leave much of an impression either way. The biggest thing I noticed is that the film attempts to score itself pretty much like every other children’s film and ends up sounding quite generic. 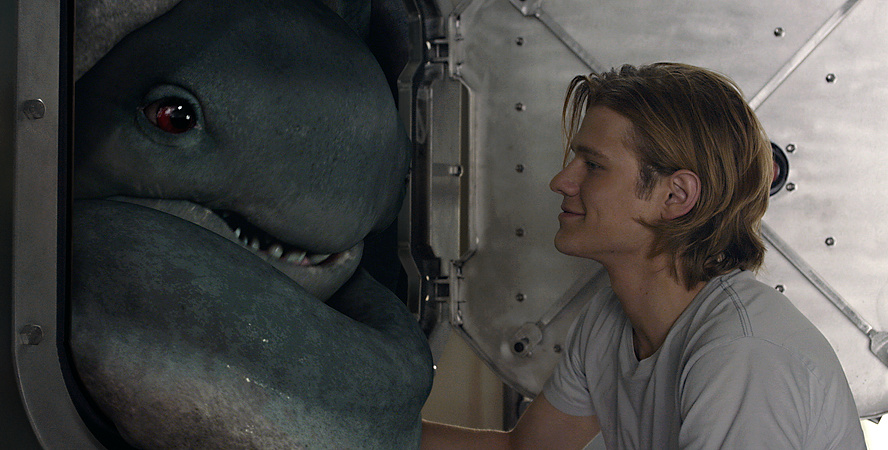 Overall, there’s really not that much good I can say about this film. It’s story is largely pointless and boring with little to no depth and even less character. The animation for the creature has some moments where it’s interesting, but occasionally finds its way into the uncanny valley where it sends us its holiday snaps. Its soundtrack is uninspired and largely forgettable but doesn’t stand out in a bad way either. The only audience which I feel would get something out of this film would be a sliver very young children who are passionate about trucks but not too young as to be frightened by the creature or too old to need anything more than footage of trucks driving over things to be entertained. I cannot recommend this film if you do not fall into this very specific demographic.
Capsule Computers review guidelines can be found here.

Monster Trucks is a thoroughly uninspired film with little for anyone who isn't under ten years of age and into trucks.
3.5