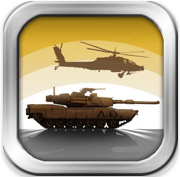 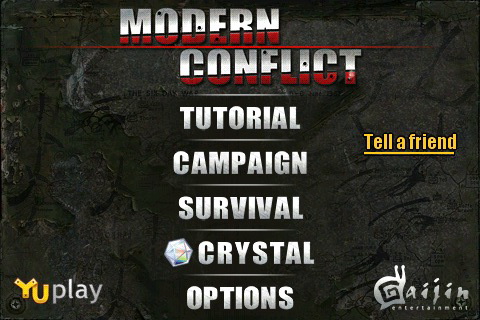 In Modern Conflict, you are a commander of your nation’s army.  At the beginning of Modern Conflict’s story mode, you can choose among three nations to control: America, Russia, and China.  The China campaign was the oddball of the three campaigns, which started off with your army taking over drug smuggling territory.  The beginning of both America’s and Russia’s storylines, however, center around the nation of Guyaran, whom America has found evidence of the Guyaran government supporting terrorism.  However, Russia is supporting Guyaran against America because they believe the evidence was fabricated so America can secure oil deposits in Guyaran territory.  So a battle between America and Russia ensues.

Modern Conflict has a very simple interface: click and direct.  The game’s six stage tutorial runs you through all the basics: what units there are, the goal of the game, and how various objects interact with your units.  The goal of each level is this: control every territory.  It’s as simple as that.  Each level you start with a certain number of territories with a certain number of units on each.  The enemy also starts off with territories, but you can’t see how many units they have on them.  There are also many unclaimed territories on the map that you can take over to get more units also.  Each territory you control adds a unit to that territory around every 1-2 seconds, which you can then direct to control other territories.  Each territory has a limit to how many units it can have on it before it stops creating troops, so it is always a good idea to conquer often. 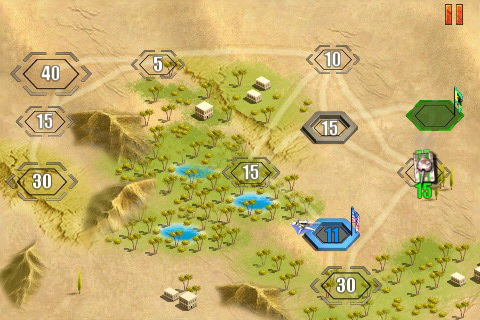 There are two basic types of territories, those that spawn tanks and those that spawn helicopters.  If a tank tries to conquer a helicopter territory or vice versa, the attacking units will suffer twice the casualities. For example, if you move 15 units of tank to attack a helipad with 5 helicopters, the attacking unit will lose ten units when conquering the territory, double the amount needed to overpower the enemy units on that spot.  There are also three different types of territories, fortified, double fortified, and anti-ground turrets.  any unit attacking a fortified base, a base with a wall around it, will lose twice the number of troops needed to conquer.  Any unit attacking a double fortified base, a base with a wall and spikes around it, will lose four times the number of troops. The anti-ground turrets attached to some bases will shoot at enemy tanks when they get near the base, whittling down their health. 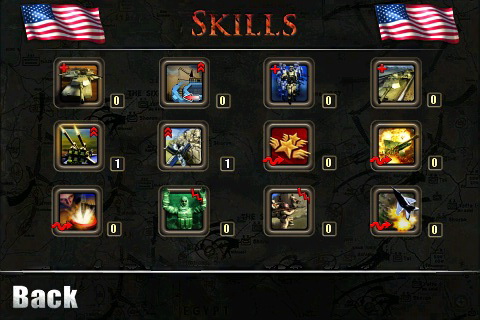 In Modern Conflict there are two modes: Story and Survival.  The Story mode is rather short, the whole game only has 33 missions: six tutorial, and nine each for the China, America, and Russia campaigns.  Where the game really shines, however is in Survival mode.  Survival mode is an endless series of randomly generated battles that get progressively harder as you advance.  As you advance through the levels, you can also upgrade  twelve survival skills that you can unlock and use, ranging from larger bases to destroying enemy guns. 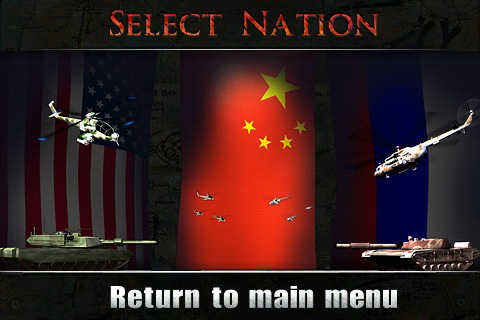 Modern Conflict is a very simple and polished strategy game.  There is no need for a bigger screen, because there is amazingly enough room to fit everything on the screen and still have the game easy and nonfrustrating to play.  This game offers plenty aside from the story mode, as the survival mode and it’s ever-randomizing stages more then make up for the lack of story stages.  The game also contains three difficulty settings and the hardest one, “Elite,” will challenge even the most seasoned strategy gamers.  In the words of Dora The Explorer, I give Modern Conflict a “very good!!” rating of 8.5 capsules out of ten.