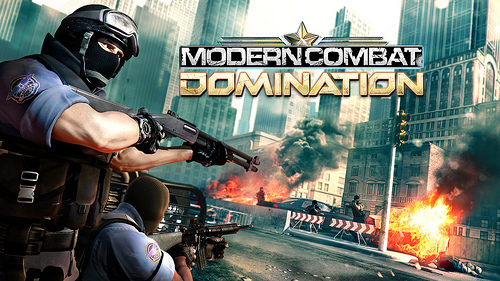 Overview:
Take a minute and pause that expensive FPS and take a quick look here as we have another FPS entering the gaming world. Now don’t walk away quite yet, sure there are plenty of different FPS out there to take a look at, and it’s definitely hard to make a splash in the current market but this game here, Modern Combat: Domination only costs $8 and also has Move support. Gameloft has made two Modern Combat games before except those were only available on cell phones. Will Gameloft’s Modern Combat survive the jump to consoles?

Story:
Modern Combat: Domination has absolutely zero story to stand behind the action that is going on, especially considering the fact that the game was designed primarily for online multiplayer. There is a mode that can be played offline but this mode does not change the actual gameplay at all other than have the player face off against bots, with bots on their team as well. The teams played by the players are named generically, such as Mercenaries vs Special Forces, and the objective of every match is of course, to win.

Graphics:
Gameloft surprisingly handles the jump to full size televisions surprisingly well considering they are used to working on screens smaller than a dollar bill. Of course that doesn’t mean that things don’t look a bit drab either. While the game does look good enough for the price tag attached to Modern Combat: Domination, the visuals are clearly not the best you can find out there. The five different maps are designed well enough but unfortunately the horrible spawning system only makes matters worse when it is combined with the fact that level design leaves much to be desired, meaning many players will spawn only to die quickly once again. 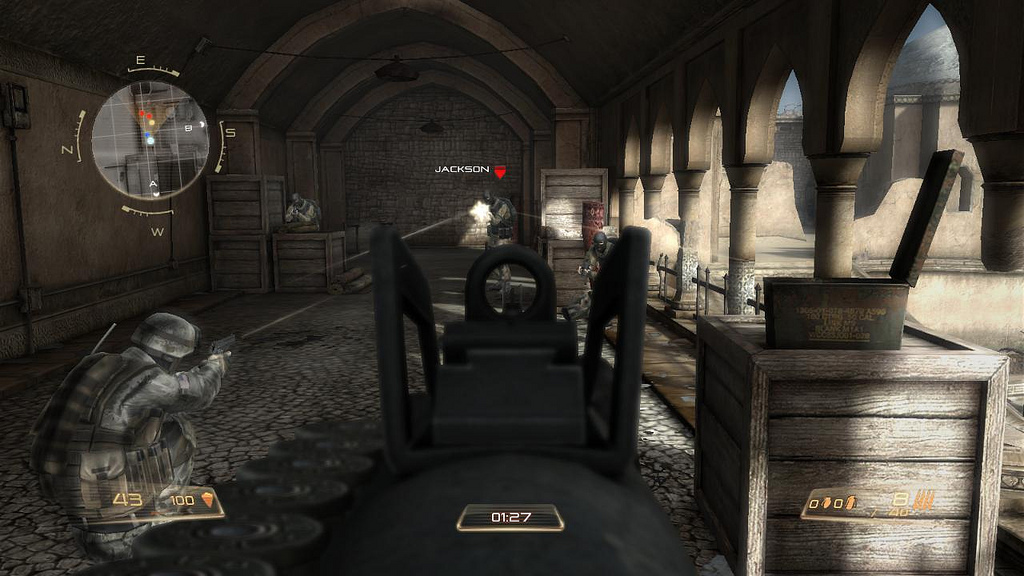 Audio:
The guns actually sound pretty good when they are fired and explosive grenades sound just as good as if they were in a fully priced retail game. It also seems that every gun carries a decent enough kick so that players actually will be able to hear and see their gun acting as it would in a real life situation. The music however is easily forgettable and more often than not I found myself not even realizing that there was music playing due to the fact that it is not memorable, or noticeable, in the slightest.

Gameplay:
Now Modern Combat: Domination provides players six different game modes to play on five different maps and also allow them to use thirteen different weapons to kill one another. Put this together with the fact that players will always be placed within a 16 player battle and it definitely asks for a closer look.
Modern Combat: Domination takes the whole weapon system and puts a different spin on things. First of all there are no killstreaks to be had. Rather the more kills a player gets in a row the more money they will make. The reason players receive money for kills, headshots, melees, etc. is that players must use money to buy their equipment every time that they die and unless they do so, they will only spawn with a pistol to use. This feature actually makes it quite balanced for new players to shoot at one another, and even if a level 1 faces off against a level 72 they will find themselves with just as much of a chance to take the level 72 down.

Now the fact that money is used to buy guns is also a setback. The reason that this is a setback is because of the spawning system within the game. The spawn system is absolutely terrible within MC:D. Countless times during nearly every match that I experienced there was a time that my player spawned, only to be shot from behind by either a camper, or an enemy player who spawned a few feet away just out of screenview. The reason that the spawn system makes the money system so terrible is the fact that once the player dies, all of the equipment purchased that they had on is lost immediately. The fact that many of the advanced guns and gear costs upwards of $3,000 at least for a moderate set, that dying cheaply as soon as you spawn is a very big letdown. 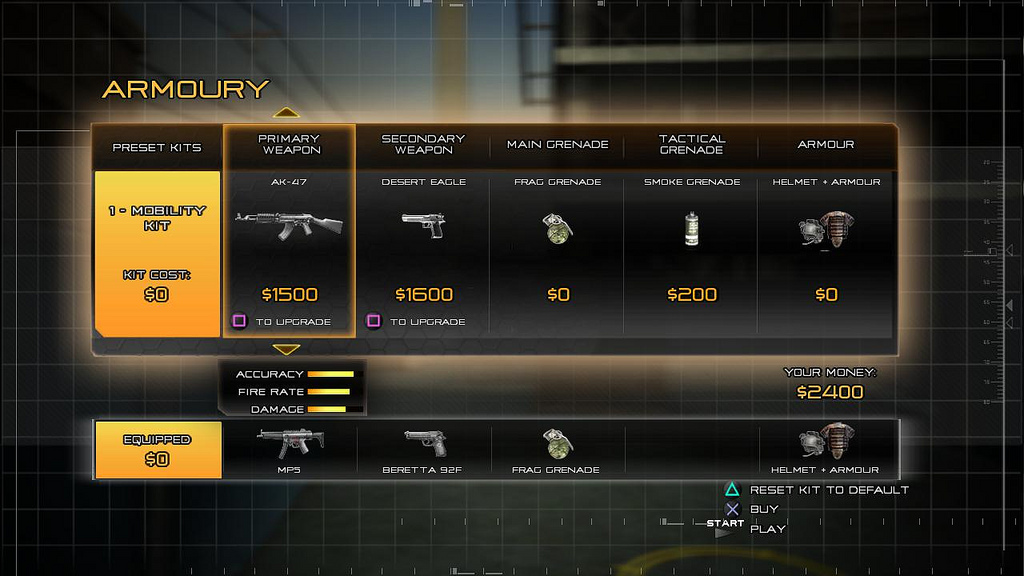 Now where exactly where all of this shooting be going down? Well GameLoft’s five different maps are called: Sandstorm, The Hideouts, Souks, Headquarters and Factory. Now any of these maps can be used to play Deathmatch, Team Deathmatch, and Domination and each of these game types are so familiar that it isn’t worth mentioning. Boom and Bust is a new gametype where players will have to escort bomb carriers to blow up a specific target, but this game mode is only available to be played on maps Sandstorm and The Hideouts. Another game mode, called Extraction, sees players capturing a brief case on the map before the enemies do. Finally there is Escort mode which randomly selects a player that the rest of the team must escort to a certain point on the map alive, if the selected player dies then the enemy team wins and the match switches sides.

Perhaps the most interesting game mode is the Escort mode as it requires lots of team work. Going off in random directions will only result in allowing the player you are supposed to be escorting, die in a corner somewhere. On the opposite end of the spectrum players on the enemy team must work together or fall to the stream of bullets that a well-organized escort group can produce.

Now MC:D may be mainly an online game, players do have the option to face off against bots in single player mode. All of the different game modes are available but players will not be able to level up and unlock better weaponry for purchase. Another thing worthy of mention is the fact that, no matter what, every match that you play will have 16 players in it. If there is not enough players for an 8 vs. 8 match then bots will fill the online slots instead. The bots AI is relatively smart and does not hurt the teams score often in my experience. There were a few hiccups regarding teammate bots simply standing in one place and being shot repeatedly by the enemy but this is rare in occurrence. 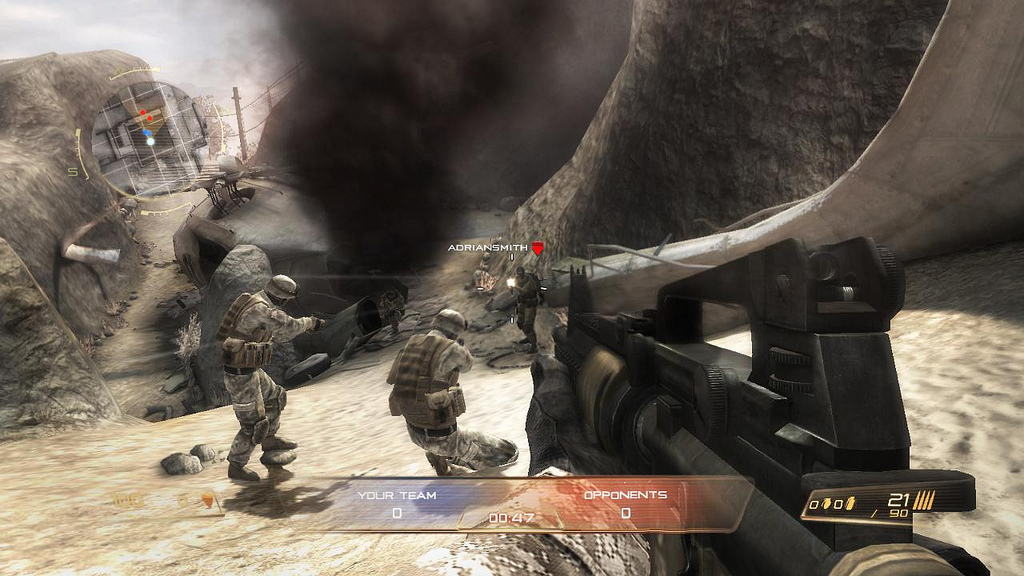 Now earlier I mentioned that MC:D is Move compatible, but this option is not forced on players. The Move support is able to be selected in the option menu and if used, will see players using the navigational stick to move around, while aiming on the screen using the Move itself.

Another thing worth taking notice of, and you will in spades, is the fact that Modern Combat: Domination takes quite a bit of time to load. There are long load times, half a minute or more, in simply starting the game up from the PlayStation 3, which then transfer into long load times inside of the game itself, whether it be loading up a match online or offline.

Overall:
Modern Combat: Domination proves that Gameloft can actually make the jump to consoles without losing the fun in translation. MC:D isn’t without its flaws; primarily the spawning system, the fact that some AI bots stutter and become a drag on the team and very long load times. But regardless of that fact there is plenty of enjoyment to be had and battling against your friends and random people online for only an $8 price tag easily places Modern Combat: Domination as a great budget online FPS.

I give Modern Combat: Domination: