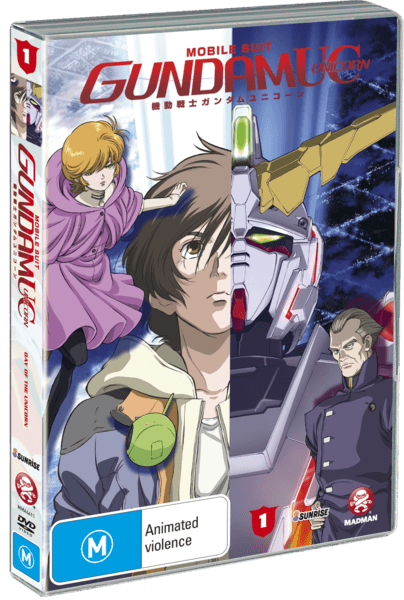 The Mobile Suit Gundam anime series is well known for defining the mecha-anime genre. Since its inception in the form of the original ‘Mobile Suit Gundam’, each of the successive series and the universes constructed within them have won the hearts of many anime fans the world over. A multitude of the stories exist within a multi-verse. While many of the series such as Wing, SEED, 00 and G Gundam all feature similarities in terms of themes and visual design, each takes place in their own separate continuities, often referred to by fans as ‘Centuries’. (for example’ Future Century’ in G Gundam, and ‘After Colony’ in Gundam Wing). However, one of these Centuries has featured an ongoing story in many separate series. This is the Universal Century (UC), the first timeline constructed in the original ‘Mobile Suit Gundam’ anime, and subsequently continued in the series’ 08th MS team; Stardust Memory; Zeta; Double Zeta; and Char’s Counterattack. 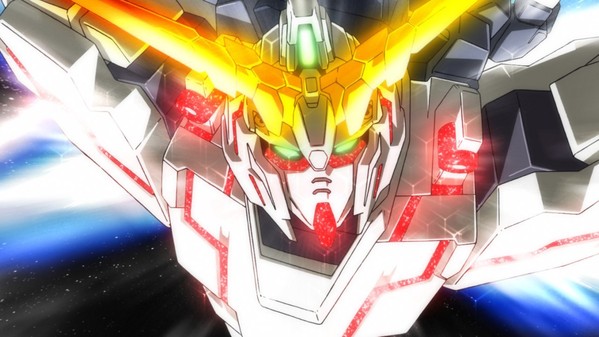 The Unicorn series is the latest entry into not only the Gundam multiverse, but also to the keystone UC era. The series essentially aims to return the audience to the grass roots of this long running franchise. Featuring a new hero, a new villain, and a new Gundam, the UC Unicorn series has the potential to pull viewers attention back to where everything started.

The Universal Century is one that has been scared by conflict since its inception. Even from the very moment the Anno Domini year system was replaced with the ‘UC’ term, violence has rocked both Earth and Space. The series opens with an attack upon a formal ceremony ushering in the new UC era in the years leading up to the One Year War. This original war was waged between the forces of the Earth Federation, and the space faring forces of Zeon. The events of the original Gundam series saw the Federation victorious, and the remnants of Zeon scattered over Earth and Space alike. Since then, forces, such as Neo Zeon have made attempts at destabilising the Federation from its seat of power to usher in a new era for humanity. However, each time has proven unsuccessful. 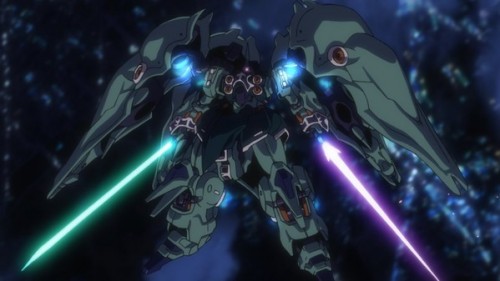 It is now three years since long time villain Char Aznable and his Neo Zeon forces attacked the Earth, only to be fended off by Amuro Ray and the Federation once again. However, in the final conflict, both Amuro and Char disappeared. Life on Earth and in Space have continued, and the wars of the past are now topics for discussion in the modern school system. It is here where viewers are introduced to Banagher Links, the main character of the series. He becomes embroiled in a plot by the mysterious Vist Foundation to hand over a secret dubbed ‘Laplace’s Box’ to the remnants of Zeon known as the Sleeves. It appears that, despite the peace that has been achieved in the past 3 years, conflicts between the Federation’s Londo Bell force and the Sleeves still continues, as is highlighted by an intense space battle.

The story told in this first volume of Gundam Unicorn is very well told and sticks very well to the continuity of the Universal Century. The plot flows a little bit quickly and disjointedly at certain points, but ultimately does a good job at establishing context, regardless of whether or not a viewer is already familiar with the Gundam universe. The main issue I have with the story of this first volume is the length. Almost all of the time spent in this first volume involves talking, philosophising and establishing context for an entire hour. During the whole viewing time, there were only two short lived mobile suit battles, neither of them actually featuring the Gundam. The most frustrating part is the fact that the hour long episode simply cuts off after the Unicorn Gundam is mobilised but before it can see any real action. One of the things that keeps Gundam fans glued to this series is the presence of kick-ass mobile suit battles. Gundam is not an anime to be watched for humour or deep drama, but for the point of seeing giant robots clash with one another in fast paced, intense battle scenes that serve as an extreme visual feast for the eyes. For me, it was simply a case of episodes being cut down too short. 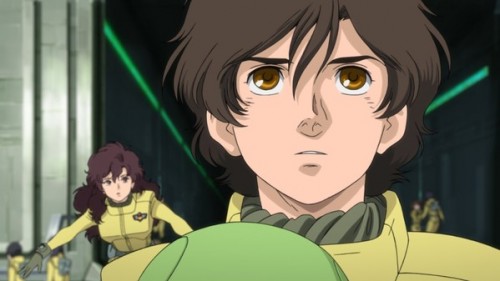 Banagher is the protagonist of the Unicorn series. Originally a student living in one of the many space colonies founded by humanity in the UC era, he is dragged into a new conflict and a potential war by the rapid series of events unfolding around him. Banagher’s origins bear a striking resemblance to those of Amuro Ray, the very first Gundam protagonist of the original Mobile Suit Gundam series. This is not only in terms of their personality, but also by the fact that both were students living in space until they become the pilots of a Gundam mobile suit secretly designed by their fathers. He is by no means a weakling, as he displays both martial arts prowess and technical skills. It is believed that Banagher is a Newtype, a breed of human beings better adapted to living conditions in space, and even better adapted to piloting mobile suits. As a protagonist, and as such, the window into the Gundam Universe, Banagher is a simple and relatable character with a helpful, but somewhat reserved and undefined personality. However his appearance and attitude is displayed as though the weight of the world is on his shoulders, and yet his only real problem is having a standard teenage search for identity. His personality as a result seems needy and clingy, made all the more apparent when he states that he just wants Audrey to “need him around”, which is made all the more confusing because she is a complete stranger. 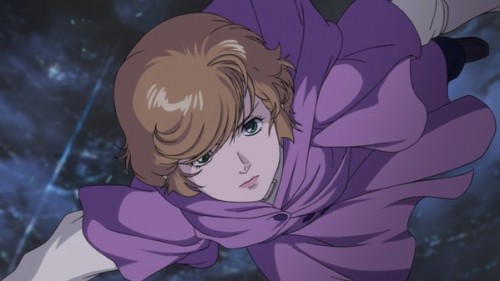 Audrey is the female lead of the series. While her background is still a mystery, she is apparently someone of great importance, given her formal speech and upper-class personality. She appears to have some link with the Sleeves and with the Vist Foundation, although her exact position is not yet discussed. She is introduced into the series as she is trying to stop a potential war that could result from the opening of Laplace’s Box. Her encounter with Banagher ultimately drags him into the conflict, as much as she did not wish for it too, and her insistence that he cease aiding her. Unfortunately Audrey falls into the same trap as many of the Gundam female leads like Relena Peacecraft and Marina Ismail. As a character in an action oriented anime, she is not particularly likable because she pretty much shoves the “anti war” message down the throats of all the characters around her, as well as the viewers themselves. We know war is a bad thing, but we don’t want to be told every time you talk. And like many of the female leads, she tries to be strong and capable when she really isn’t. She says she doesn’t need Banagher’s help, and yet she seems to always need it. In a majority of cases with Gundam female leads, kudos to them from trying to act nobly to prevent war and death, but they ultimately all end up being captured at some point or in need of a male protagonist to rescue them. Unfortunately, Audrey is no different. 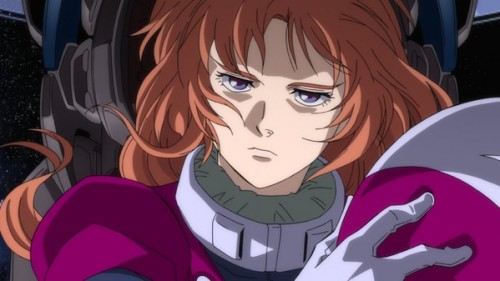 Marida is an Ace Pilot of the Sleeves and whose attire and mannerisms might as well scream “I am a bad guy”. However, her actions seem driven more by loyalty than personal interest. She is clearly a very capable pilot, able to utilise funnel weapons on her mobile suit, an ability that is almost exclusively reserved for Newtypes. During the entire screening, she sees the most action in her mobile suit, tearing through the forces of the Federation and Londo Bell with relative ease. Given the time period since the ZZ series, I could not help but think that Marida bears a striking resemblance to Puru-Two. It must be said that I like Marida’s character. She is cold, calculating, a capable soldier and loyal to a fault. Everything that a villain would want in a henchwoman, and everything the viewers could want in a potential anti-hero. 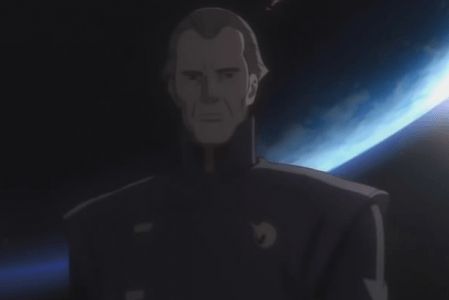 This strange, but wealthy old man is the head of the Vist Foundation. It is his resolve to hand Laplace’s Box over to the Sleeves that ignites this new conflict. His intentions are not entirely clear, but it can be assumed that they will be made so in subsequent episodes. Due to his wealth, he is a man of clear standing and influence in the colony. He also appears to have some form of link with Banagher, but the nature of it remains a mystery until close to the end.

As the latest release in the Gundam multiverse, the Unicorn series features the most up-to date visual style among the Gundam series. What I particularly like about the visual designs applied to this first episode is how the graphic designers have taken the visual design of decades old mobile suits and ships from the older UC series’ and re-imagined them both in terms of design and animation. Seeing the newly designed Nahel-Argama battleship and the Jegan mobile suits animated in battle was fantastic to see. Not only is the series remaining faithful to the continuity of the Universal Century, it has also evolved in terms of graphic quality. The character designs are also well drawn and defined, though the colour scheme is a bit too bright at points. The visual style also tends to swap between 2D animation and 3D CGI modelling during points in the mecha battles, best seen when the Unicorn Gundam is launched. That said, I find the design of the Unicorn a bit puzzling. It’s pure white design and single pronged horn on the helmet provide for its mythical namesake, but lacks the trademark Gundam chest until it engages in a red-tinted transformation mode. Until that point, it just looked like a simple white mobile suit. 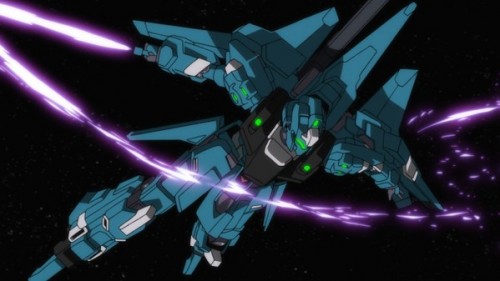 The attached soundtrack is good at conveying the feel of events and situations, but does not seem as paced or as epic as other Gundam series like Wing and 00. The voice acting is decent enough, though annoying from some of the extra cast, but nothing that one would classify as the stuff of legend. Ultimately the soundtrack and VA work provides a strong introductory experience, but it does not emotionally involve the audience too greatly, simply by virtue of the fact that it is too early to entirely do so. Sound effects are well appropriated, especially in battle scenes. Overall the audio delivered a good, but not great audience reaction to the visual presentation. 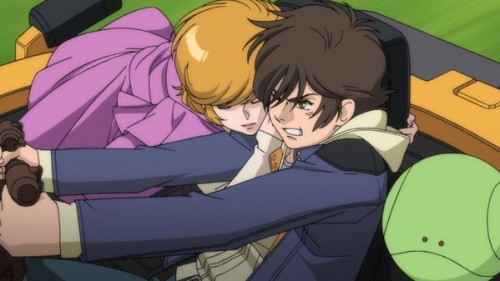 This first volume of Gundam UC is a competent introduction to the series made stagnant mostly through its disappointingly short runtime, and overdone character axioms. The first volume acts as a good episode for establishing context, and catching up viewers on the current nature of the Universal Century. However, for fans wanting to see a large degree of action take place, one had best wait for a second volume to be released, and then watch the two in tandem. The lack of action is understandable but still disappointing. However, as a return to the Universal Century, since almost two decades, this introduction to the new series Mobile Suit Gundam Unicorn is certainly a must see for the hardcore anime fanbase.