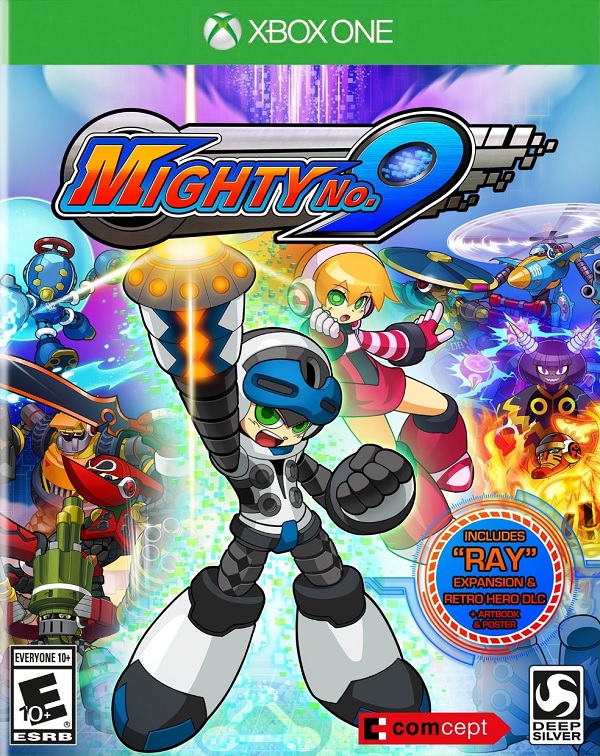 When Keiji Inafune announced that he was holding a Kickstarter for a game that many Mega Man fans had been hoping to see the likes of for many years that project managed to set records at the time. Now after plenty of waiting that left many anxious as to whether Mighty No. 9 would ever actually be released, the game has arrived. Now the question remains, is Mighty No. 9 a fitting replacement for a series that many have fond memories of or does it fail to measure up?

Set in “the current year” that takes place in an alternate world where robotic advances have put a stop to most of the world’s problems, the only real violence that takes place happens in an arena where robots battle one another. While issues in the past are mentioned, no one ever thought about what would happen if the robots suddenly started to malfunction. 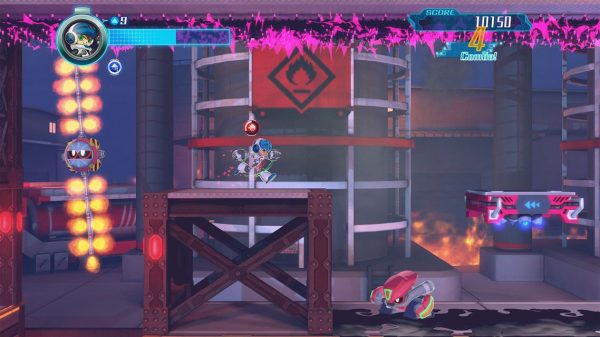 That happens to be the core storyline of Mighty No. 9 as players take on the role of Beck, one of only two robots that are seemingly unaffected by a strange occurrence that has made everything from standard shipping drones to other “Mighty” style bots begin rampaging through the streets. It is up to Beck to take down these eight Mighty robots as well as help his creator Dr. White find the source for the robotic violence.

If this sounds fairly predictable then you are right in that regard and unfortunately you cannot expect much in the way of actual development here for any of the characters in the cast until near the end of the storyline and even these are simplistic in nature . This standard story style is also damaged by the fact that the characters present throughout the story range from incredibly bland to flat out terrible thanks to subpar writing and acting, but more on that later.

Mighty No. 9 plays almost as predictably as one could imagine as it borrows almost whole-heartedly from the Mega Man concept of traveling to different stages, fighting your way through enemies and platforming through dangerous levels only to face off against a boss that, when defeated, will grant Beck a new power that can be used on other enemies in fairly standard side-scrolling gameplay. 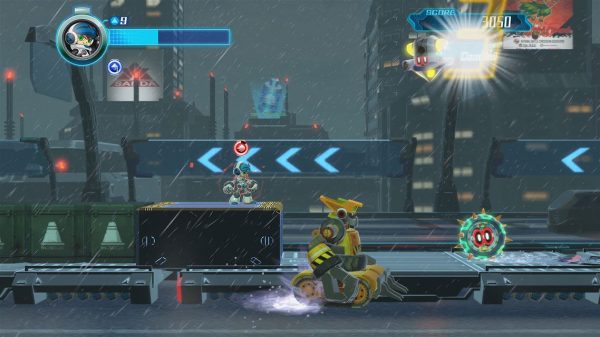 One element that does help set Mighty No. 9 away from the game it so obviously draws from is the fact that Beck has the ability to dash and it is through this dash system that players will be defeating most of their opponents. You see, after dealing damage to a robot they will enter a stunned mode that allows Beck to dash into them and absorb their “Xels” in order to fully defeat them. These dashes are a regularly used concept throughout the game as players will need to make use of it in order to jump larger gaps, slide through narrow passages, and of course permanently drop health from boss enemies that tend to recover otherwise.

As you absorb enemies, players will also slowly fill up a healing item that can be used either through the menu or at the tap of a button in order to try and save yourself from death. Various enemies can also have the chance to drop temporary buffs to damage, speed, etc. and the faster a player absorbs an enemy after stunning it the higher percentage they will receive, resulting in building up a combo that can reward the player with more points. 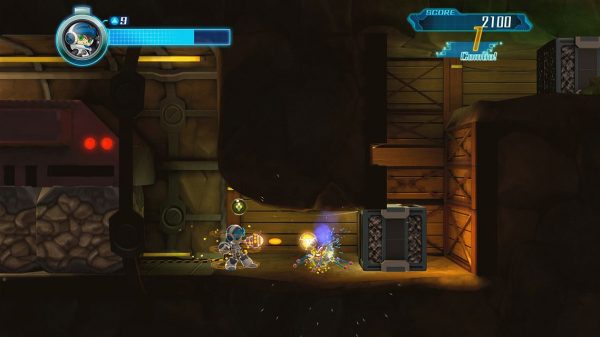 After making your way through each stage, which are at least decently varied and a few even throw a couple of twists into the standard formula though tend to be littered with incredibly cheap death traps designed in a manner not to challenge the player, but simply to slow them down, players will eventually face off against the boss at the end. Unfortunately these bosses range from dull to incredibly cheap as they demonstrate a number of moves that can flat out instantly kill Beck if the player can’t mash buttons quickly enough. The dull part comes from the fact that most bosses simply follow a standard pattern that is changed up only slightly after dealing a certain level of damage to them.

After defeating a boss Beck will gain their ability and can use it from then on in other stages. The problem here is that these special abilities rarely feel worthwhile to the point that, outside of using certain weapons to target a boss’ weakness, players will rely on the standard blaster more than anything else. 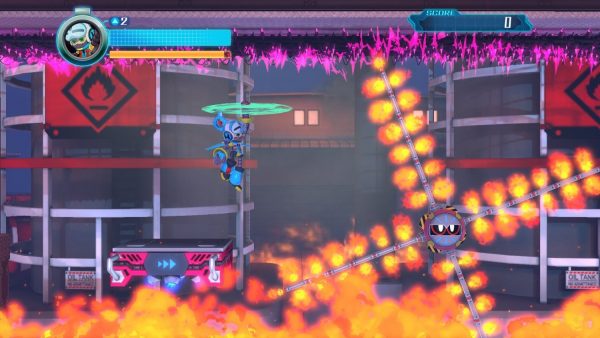 Outside of the standard story mode, players will find challenges that they can tackle as well as a multiplayer mode. Both of these feel incredibly simplistic in nature, with the multiplayer mode feeling like an afterthought as the addition of another player to a stage does very little to actually change up the gameplay other than provide players with something a bit different to spend their time on.

As players make their way through the game they will explore a variety of different themed stages that often are designed around the type of Mighty robot that Beck is currently chasing down. The variety in these designs is quite nice but unfortunately the style in which they are presented is incredibly lacking. This is primarily due to the surprising re-use of cannon fodder enemy design detracting from the unique feeling for each stage, meaning that players will be less than impressed with what they are presented here, especially thanks to the overall simplistic design of most of the characters, with only a few Mighty robots feeling unique enough to stand out. 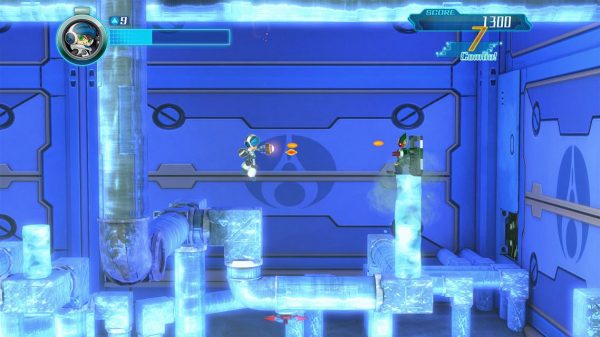 This problem is only increased thanks to the fact that every cutscene is presented using the game’s 3D models which are given barely any animation here. Characters will speak with no emotion or even lip movement showing on their model and this lack of enthusiasm is present even in the voice actors. Despite featuring a number of recognizable English voices, almost every character sounds downright terrible, ranging from poorly timed readings featuring large gaps in a sentence to simply sounding completely bored with their recordings. At one point a character even mentions that they should be more enthusiastic about the progress being made in the game but thanks to the lack of emotion in the rest of the cast, it made for the best joke in the title so far.

Mighty No. 9 is the type of game that feels like it tried to hit every possible check mark in a list but never went beyond simply checking off those boxes. While it does present a serviceable enough title with shooting mechanics and dashing providing a fast style of gameplay and unique feeling stages, everything else feels almost below average. Ranging from simplistic character designs that lack any animation, boring enemy designs and uninspired bosses, Mighty No. 9 fails to be anything more than a mediocre side-scrolling shooter.
Capsule Computers review guidelines can be found here.