The difficulty of Max Payne 3 may come as a shock to some people. It certainly revs it up a couple of notches in comparison with some of the games out there. Easy feels like a normal medium, medium feels hard, and hard feels impossible. Let’s not even go into old school, or hardcore mode. Each increase in difficulty results in a decrease in health and Bullet Time rewards, with old school disabling Last Man Standing. 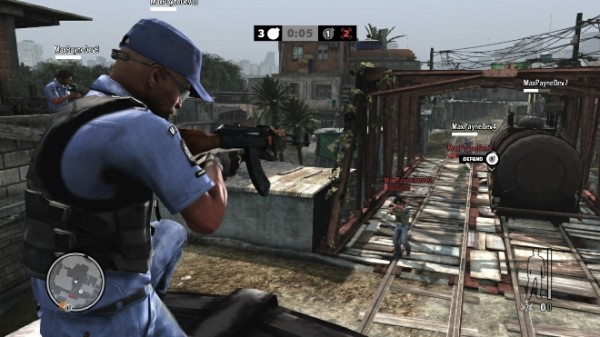 There is also an interesting and different multiplayer mode that has a great range of customizable loadouts, and more than just your standard death matches. There are also modes with storylines and several different stages (Gang Wars), and a mode called Payne Killer in which you try to play as Max or Passos for as long as possible, with each time either of the characters is killed meaning that their character is given to another player. The different multiplayer modes are interesting and certainly have more to offer than most third person shooter multiplayer games do.

There are no words to describe just how much I love the visuals for Max Payne 3. Even though the colour palette isn’t as dark as previous games, it still holds the noir feel incredibly well. The cut scenes are beautifully put together, and just awesome to look at. The transitions between present time, to flash backs, to flash forward, are just beautiful and a joy to watch.

The parts where the cut scenes phase in and out match Max’s state of intoxication, and the use of writing on the screen is paced incredibly well and is really successful at assisting the emphasis and focus of the dialogue. 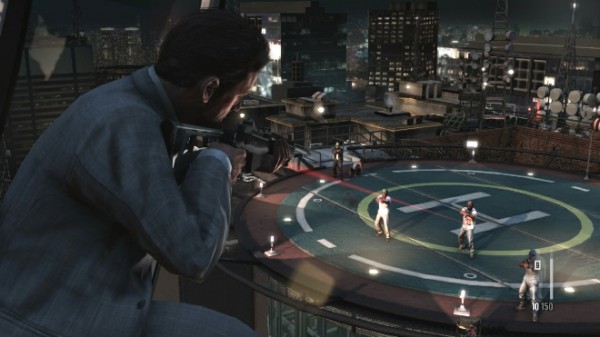 A lot of care has been taken with the visuals, including the fact that motion capture has played a big role in the cut scenes and the general movements of characters. Even the thugs were motion captured, and move individually, not as copies of each other. It looks and feels like a movie, that’s the degree of realism that has been brought to the game.

A downside is there was a few visual glitches in the game, some were small, such as Max hovering over the stairs instead of walking down them, while others caused a real disturbance in the gameplay. In one instance a Last Man Standing resulted in a massive visual glitch that took a couple of seconds to right itself. However, these are quite rare and you’re unlucky to encounter them during gameplay.

The soundtrack is composed by American rock band HEALTH and Brazilian rapper Emicida, as well as Brazilian composer Pedro Bromfman, and just sounds fantastic. The soundtrack goes from a single, solitary cello identifying with Max’s angsty journey, to a slamming suspenseful track for the action-packed scenes.

James McCaffrey’s reprisal of Max Payne is amazing, his gravelly voice brings life to the game. If someone else had voiced Max Payne then it probably wouldn’t have been as amazing a game as it is, but his voice acting makes the game even more immersive. Plus, he loves his puns, which is always entertaining.

Max Payne 3 is like watching a movie with scenes of intense fighting. For those who are impatient and not fond of cut scenes, you probably won’t enjoy the game as much. However, the cut scenes are truly amazingly done and written, and the story is dark, twisted and just as deliciously angsty as Max Payne has been in the past.

The game will challenge you, and ask more of you than most other third-person shooters, but that just results in a larger feeling of accomplishment when you’ve powered through. While there are a lot of cut scenes, there is also a lot of meat to the game, and the gameplay definitely makes up for the breaks.

Max Payne 3 is a fun, daring, and beautiful game that really does do its best to bring the Payne.