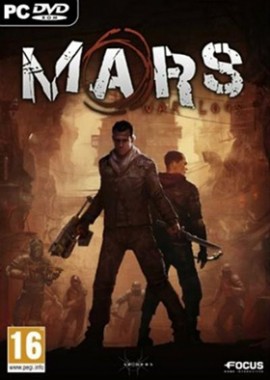 Overview
I find it bizarre that around the same time I began playing this a private Dutch organisation started accepting applicants for a one-way trip to the Red Planet, a colonisation effort set to launch in 2023. Mars: War Logs is the latest in our long-running fascination with the close neighbour, and by now I’m beginning to think that planting our feet down on the surface is probably not the best idea.

Focus Home Interactive’s action RPG follows the conventions of the successful, conversation-driven formula that gamers have appreciated in some of the bigger titles over the years. Here we have an ambitious, cyberpunk offering built on a relatively tight budget but with an attractive price tag to match. Is it worth the six month voyage and getting dusty over? Pack some clothes, oh and no need for a pressure suit, they can breathe over there now.

Story
Mars: War Logs is set in the future, in a time long after Mars was partially terraformed for human colonists and a century since the planet’s society lost its semblance of order. Amidst all this chaos there are “guilds”, companies managing the most precious resource, water. They also happen to be at war with each other. A young soldier, named Innocence, from the guild of Aurora finds himself a prisoner of war of the enemy guild, Abundance. 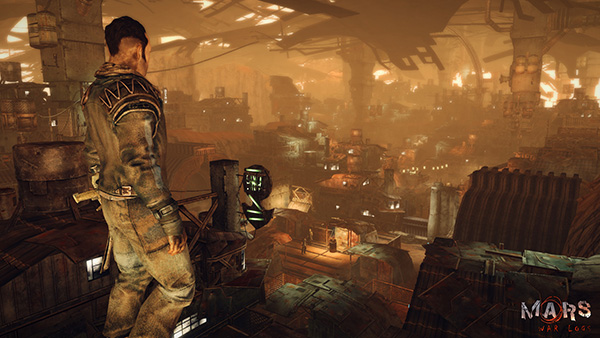 The player is almost led to believe they’re taking on the role of this kid but instead he is the voice of the story, the keeper of these “war logs” and a companion to the player’s character, Roy. Roy, known as Temperance in Aurora, is a prisoner himself and gives off the impression of a certified badass with a mysterious past. He also wields lightning, an ability limited to the mysterious guild-serving Technomancers who seem to be at odds with you at every turn. What follows is a dramatic prison escape and a decision to choose sides later on as is fitting for a western RPG these days. The best way to describe the actual storytelling is it’s like a diary being read out to you, interspersed with fairly B-grade narrative points.

It’s a solid storyline that doesn’t take risks. Nothing really raises eyebrows (other than Innocence almost getting deflowered by a prison welcoming) and you follow the breadcrumbs to a slightly rushed ending. The dialogue is fairly crude but satisfactory enough to propel the narrative forward. Ultimately, while the setting on Mars and the background of how things came to be is intriguing, the story is unlikely to captivate an audience in a memorable fashion.

It’s clear that gameplay mechanics are the focus of Mars: War Logs. The game ticks off all the areas on the WRPG list: a main quest line, side quests, various hubs (that while serve their purpose aren’t explorable much), conversations with clear-cut moral choices along with skill trees and a weapon upgrade system. Combat is a very intimate affair, as you’ll be cracking skulls more often than not. It’s also not exactly easy either, especially starting off, and you’ll find charging and button mashing rarely works. I was repeatedly swarmed by enemies before mastering the block, counter and evade moves. Sneaking is always an option throughout the game, and although you’d be hard-pressed to sneak past the whole game, it provides a very helpful way of hitting first and dealing more damage. 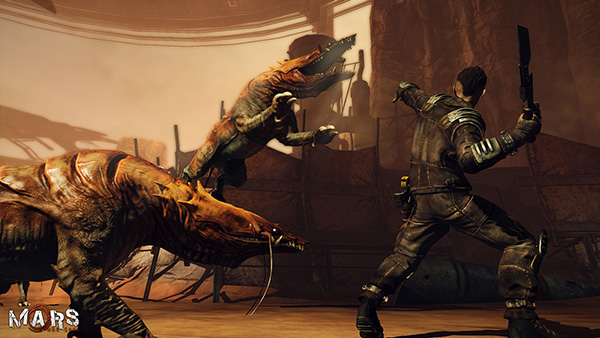 Weapons primarily consist of crude melee objects like pipes which you can upgrade as long as upgrade slots are available, and it’s a nice touch seeing how these weapons change appearances. Ranged nail guns and explosives can be used, but have very limited ammo and work as a skill you unleash rather than tote as a weapon. Electric Technomancy is like magic in any other RPG, it consumes your “Fluid” allowing limited use but it slowly regenerates and can be increased with skills and item upgrades. Thankfully it’s really satisfying to use, providing a welcome way of putting distance between your enemies and frying them in the process.

Romance options are all here and no different to what you’d normally find in a WRPG. At one point Mary, a potential lover, just recovered from trying to kill me before asking if I want to sleep with her. It almost seems like an obligatory feature they wanted to include, rather than anything meaningful. Needless to say the event was typical of a love scene in a game – a quick embrace followed by some touching then fade to black. 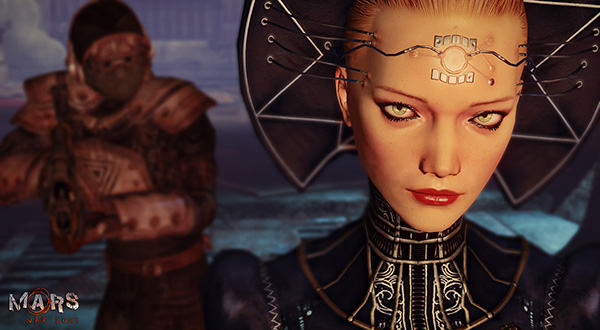 The skill tree will be familiar to anyone who has played The Witcher 2, as it’s almost identical complete with a branch for Technomancy that is locked until a certain part of the game is reached. That’s not a bad thing, as it’s a system that works remarkably well and isn’t too complicated nor simple. There’s plenty of upgrade parts and items to scavenge in the game world, and you’ll find yourself methodically searching scrap heaps and bodies for them. Although the Mars setting is fairly gritty and realistic the NPCs simply don’t react to what’s going on. For example there’s a massive battle raging in the street between the player and soldiers with Technomancers. But the people on the streets continue on as they were. You can hardly blame the AI, but it does break the immersion a lot. 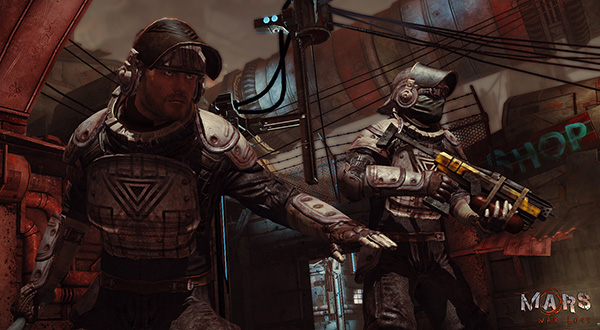 Visuals
We’re nearing the end of this generation and many of us have been spoiled by fancy tech demos and trailers of the future. From a technical point of view, the  graphics of Mars: War Logs are satisfactory but hardly anything to write home about. There is only so much a team can do for a downloadable title that tries to go toe-to-toe with the heavyweights of the genre. 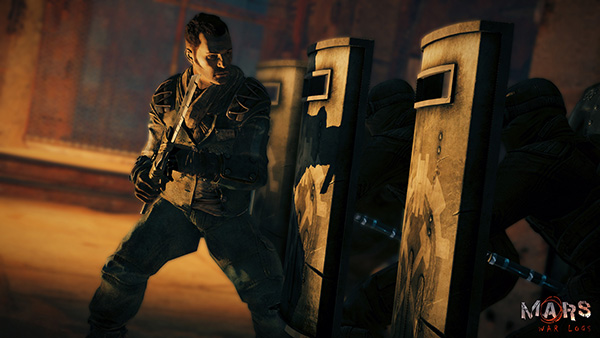 Having said that, you hardly notice the graphics while you’re playing as the engine merely serves as a vessel for all the quests, combat and conversations in the game. It never tries to thrust itself into your face. It’s just there, fully aware of its limitations and modest about it. The animations are smooth however, and everything falls into place during combat. As awesome as it would be, it’s too much to ask for a particle system that can generate dust storms and the sort. The art style though is definitely one with a gritty and cyberpunk feel, and the concept art behind this project is pretty outstanding.

Audio
Maybe one of my biggest complaints for Mars: War Logs is the sound as a whole. When a game doesn’t amaze visually, it’s often clever sound design and music that really sets it apart and makes the experience memorable. The game, however, is just too quiet. Maybe sound doesn’t travel far on Mars but other than the player and the NPC they’re talking to, you can’t really hear a thing except a very soft wind. The typical sounds of a prison camp, or a market, simply aren’t there. I found myself alt-tabbing frequently to put music on as running between locations with hardly any in-game music or sound effects is not fun, at all. 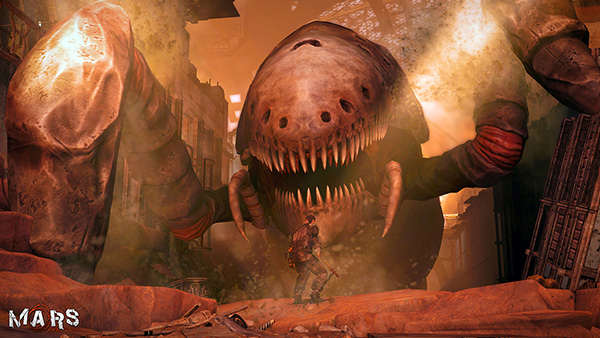 The voice-acting here isn’t stellar, but it does the job and some of the lines are genuinely funny at times. When a lot of action is happening though, the voice volumes don’t really match the visuals. For instance, a character yelling as they move away from the screen sounds just like they are next to you in the recording studio rather than outdoors.

Overall
Despite the quirks and rough coat of paint, Mars: War Logs is still a worthy effort. Anyone who enjoys WRPGs like Mass Effect, The Witcher and Dragon Age will find something to take from here even if it’s all been done before. One thing that surprised me was the almost complete lack of bugs. Normally we find glitches and even game-breaking bugs in AAA titles, but War Logs is almost rock solid.

At the end of the day this a downloadable title at value price, but one that offers a pretty robust, action RPG experience. The game follows conventions almost too much though, and in the future I’d love to see the team carve out an RPG that stands apart from the crowded market. In the meantime, welcome to Mars and enjoy your stay.