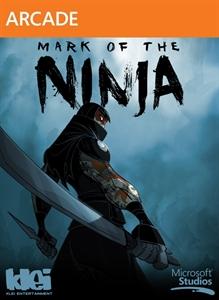 Overview
Klei Entertainment first caught our attention a few years ago with N+, and garnered further attention for themselves with their critically praised Shank series, which released on digital platforms not too long ago. After a short hiatus, Klei is back with a pure stealth experience starring yet another ninja, by the name of Mark of the Ninja. When I first heard of the 2D ninja game, the first thought I had was…”Well, here’s another one”. If you were like myself in that thought however, you would be wrong. Mark of the Ninja nails nearly everything it attempts, and is definitely one title that everyone should be paying attention to after a slow summer on both the Xbox Live Arcade and Playstation Network. Why, you ask? 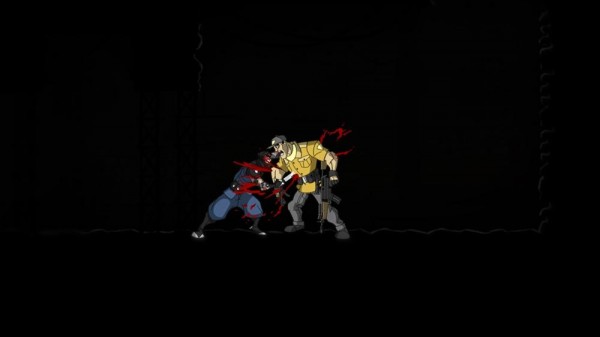 Story
In Mark of the Ninja, players take the role of an unnamed assassin who is out to get vengeance on the big bads who hurt his allies. There is certainly more to the plot than that, but the game doesn’t really put enough emphasis on it’s story for the player to truly follow along as intended. That’s not a bad thing, really, as the dark, shadowy environment and assistance of the lovely and mysterious Ora do a lot to entertain the player along the way, giving those cutscenes a reason for existence and setting the stage for all of the killing (and hiding) you will be doing along the way.

Yeah, I want to say I remembered everything about Mark of the Ninja’s story, but like most ninja games, the gameplay is where this experience shines and the plot really is only there to get you from point A to point B with a bit of a clue as to who your enemy really is.

Gameplay
When a game is so effortlessly captures the genre it’s in and makes it’s modern competition seem shallow, you know you are playing something special. That is exactly what Mark of the Ninja does in comparison to the likes on Ninja Gaiden and even Metal Gear Solid…to a degree. You see, Mark of the Ninja is a stealth driven, 2D action title that relies on having our nameless ninja hide in the shadows and slash through foes in order to make it to the next area. 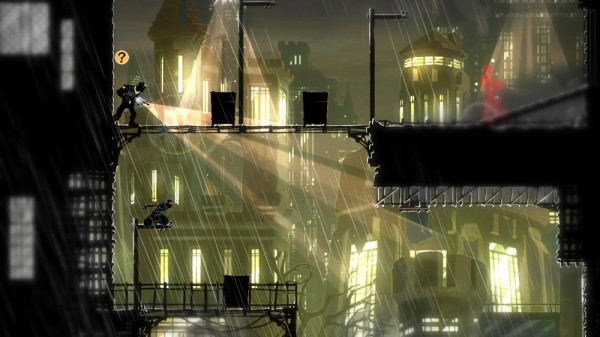 Think of each room like a puzzle. A guard is watching the door like a hawk, and your main objective is to get inside the room and save a fellow ninja who has been abducted. Several other guards are patrolling the area, so you can’t just jump in or your short amount of life will be diminished within seconds (you are not invincible, after all – just highly skilled at parkour and wall clinging). Within a few seconds time, you must use a throwing knife to take out the lights, climb through a nearby vent, and then pounce down and kill the guarding foe without being noticed by the other distracted enemies, who are so busy looking at the smashed light that they have not realized an intruder has quietly entered the room. After a quick gesture, the ninja is free and our hero zips out of harms way and on to the next area, where a new challenge awaits. That is how this beast of a stealth game plays, and it’s so well paced and fluid that almost every encounter feels as equally thrilling as the last. 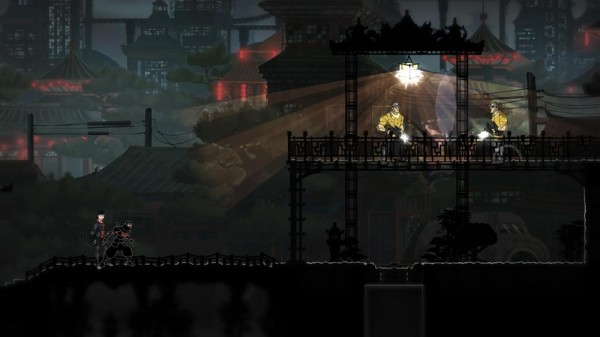 Sounds good, right? Well, that’s really just the core of the game. The controls make life easy for players, and I would best compare the layout to the likes of a faster Metroid mixed with a bit of Ninja Gaiden. Players move throughout each stage by crawling through vents, jumping on lightposts and other structures with a grappling hook, and simply tiptoeing among the shadows in order to not get caught by the baddies in-between. The concept is simple, but this ninja title makes up for it’s lack of depth in one area in others completely by letting players get that genuine ninja experience with the tools of the trade.

From the start, only the ninja’s jumps and athletics will get him by along with the environmental hiding spots, but as the game progresses, new abilities can be learned in order to make life a little easier as you go on. Tools like noisemakers can be tossed to distract guards, smoke bombs can be set off to cause confusion and shut off deadly lasers, and even cardboard boxes that allow for quick hiding can be obtained throughout, which are all part of a genius little leveling system within the main game, adding a large layer of strategy and making each room different from the next depending on your own creativity. Pulling off the tricks of the trade would mean nothing if it weren’t for the rather smart AI of the foes that stand as obstacles in your path as well, and thankfully, the game as a whole (dumbfounded henchmen and all) remains smart until the end. 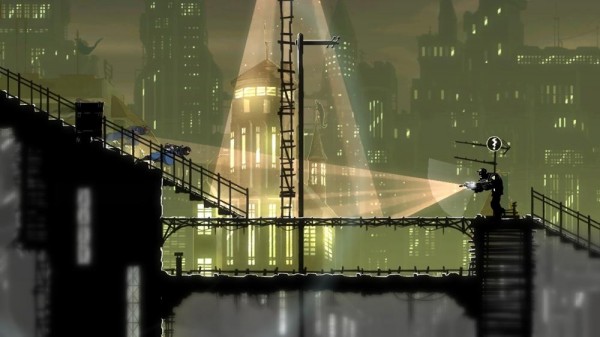 You see, sound and visual cues play a large role in staying hidden. If you make a commotion by doing something such as killing a guard or breaking a lamp, a sphere of color will appear, meaning that a nearby enemy has heard a sound coming from that particular area. It’s easy to be detected, so the player must constantly think of ways to distract and disarm the enemies around them, without causing a scene in the process. Throwing knives are one of the most useful items, as the player can stop time on the fly and ting a pole to make a noise to distract a guard, and then sneak in quietly, hopping into a shrub or piece of shade that is nearby in order to go unnoticed. This kind of thinking will rack up points, and staying alive is really the only objective you need to focus on for the most part during each stage. If a large group hears you galloping about like a madman, there is no other choice but to run and flip out of the way, so finding a route out and pre-planning a chain of events is the best way to get the most out of Mark of the Ninja, as this game rewards you for your victories with progression, and punishes your failures with a lesson.

Visuals and Audio
The graphics in Mark of the Ninja are not overly impressive within the game, but get the job done effectively and make everything look the part. The ninja himself is well animated and runs like a well-oiled machine, giving little room for error when it comes to slip-ups unless you, as the player miss your mark during an intense encounter. Kills are usually not flashy, but the enemies do spew a bit of blood and feel very much alive in this shadowy world as they pace nervously through hallways, and the lighting is also very effective at producing all sorts of hiding spots and danger zones for the player to watch out for. Cutscenes may not matter all to much due to the lacking story, but they are wonderfully portrayed with a stunning art design, which carries over in a smaller package into the main game itself. 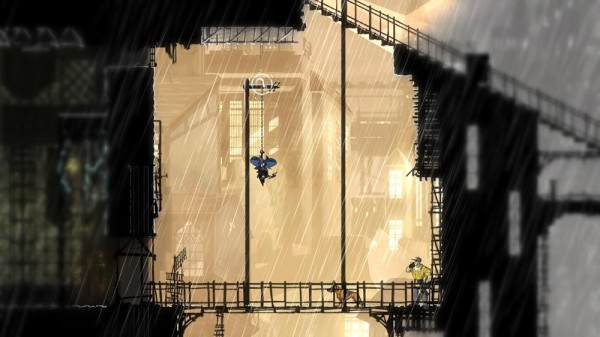 I know there was a little bit of music within Mark of the Ninja, but it will be the last thing you pay attention to while actually playing the game. Hearing the voicework is very important, as audible cues such as “I think I heard something” can lead to your own fate quickly. The acting that went into these voices are done decently as well, and never come off as stiff or forced like many of the older stealth titles of the past. The sound effects are a very important part of the experience here, so playing the game on mute would literally be impossible, and the quality of all of the attention to detail is just to good to be ignored as it stands anyway.

Overall
Before I played Mark of the Ninja, I really didn’t sit and think about how much we were missing from the stealth genre. Games these days are so worried about the flashy kill, that they hardly ever seem to be concerned about the thrill that made the genre famous so long ago. It’s all in the details, folks. Mark of the Ninja is the very definition of the genre and while the story is forgettable, the raw, stealthy experience in-between makes for an intense and enjoyable atmosphere that puts the big guys to shame due to how well Klei Entertainment ties everything together. Sure, you can look more like a ninja by playing a game produced with an uber budget, but our nameless protagonist outclasses the competition in every other way where it counts, letting the player embrace and unleash the true representation of the iconic assassin.