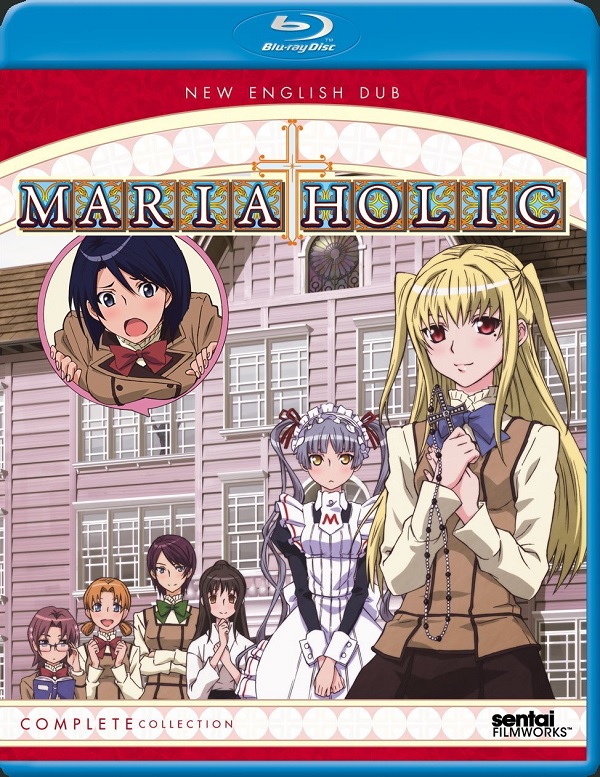 Overview
Over the past few months Sentai Filmworks has begun re-releasing a number of older anime licenses with new English dubs overtaking the previous sub only releases. The latest title to receive this treatment happens to be Maria Holic. With the style that the animation studio Shaft tends to take with many of their series and how off the wall the main character, Kanako, can be at times, does this new English dub work with the latest release of Maria Holic?

Story
Kanako Miyamae has transferred into the private all-girls Christian school named Amenokisaki for her second year of high school. While the school usually doesn’t accept transfer students for her grade, they have given Kanako an exception since both her mother and father were previously at the school. Considering the school is only for women, Kanako’s father was a teacher who fell in love with her mother and they quickly married upon graduation. 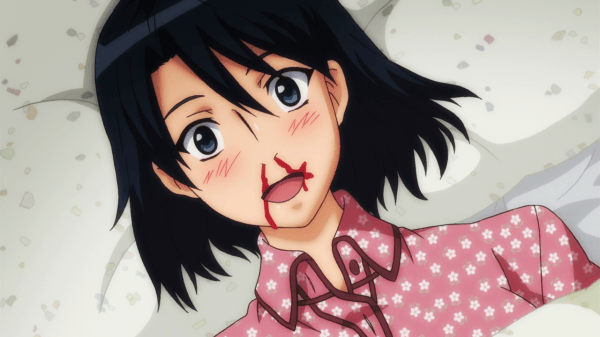 She has transferred to this school to follow her late mother’s footsteps in finding her true love at Amenokisaki, but love comes in all forms and this girl isn’t looking at any of the male teachers on the staff, but instead at the bustling student body of healthy girls. You see, Kanako bats for the other team and is a rather extreme lesbian that suffers from explosive nosebleeds and often fantasizes about the girls she meets.

With so many girls she could potentially meet, the very first girl she comes across just so happens to be one of the most popular ones in the entire school, Mariya. The only problem is, as charming as Mariya is initially, all of that charm flies right out the window when Kanako discovers that she is a he and he is a rather cruel and manipulative person willing to threaten Kanako into secrecy by blackmailing her with her lesbian tendencies and going so far as to move into her dorm room to keep an eye on her. 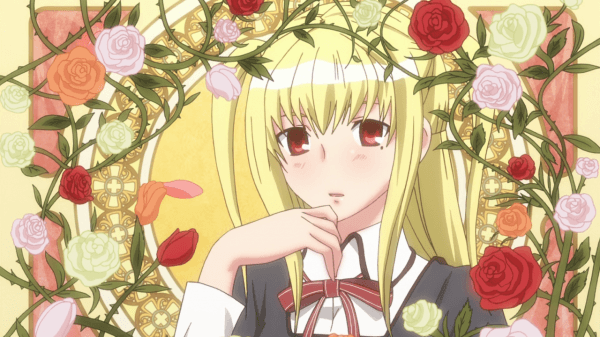 While this would be an issue for anyone, it is especially troubling for Kanako as she has such an outrageous fear of men that she starts to break out in hives whenever one touches her. As such, with the manipulative and often cruel Mariya now residing in her room, Kanako will try to live out her lily colored dreams at school the best she can, at least as long as she can keep some blood in her body at least.

There really is no overarching storyline in Maria Holic to speak of, as we simply follow the life of Kanako with no real hint of a plot outside of perhaps ten seconds total involving rosaries, though the reason for Mariya’s cross-dressing is revealed. Instead Maria Holic is all about the laughs and focusing on Kanako as she tries to make friends and ends up being on the receiving end of all kinds of misunderstandings, odd bullying, and more. You see, while Kanako tries to make friends she immediately attracts attention of not only Mariya, but another popular girl at school that has a jealous fan club bullying her with aquatic based foodstuffs. 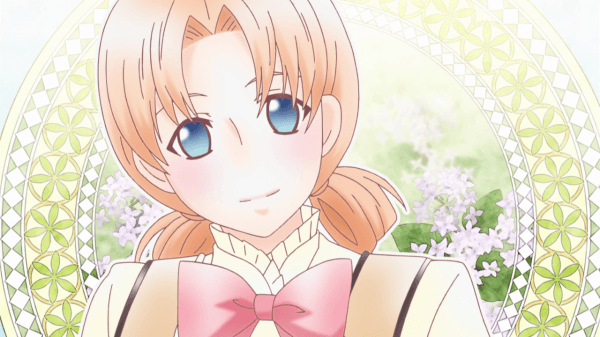 If that didn’t sound odd enough then you really have nothing to worry about as the entire cast of Maria Holic is an oddball in their own right. The dorm manager is a little girl with twitching cat ears that insists on being called God and sings morbid melodies in her free time, the friends Kanako manages to make range from cheerful to so stoic that she never seemed to have friends before, and there are numerous oddities that pop up from time to time and never really are explained outside of the fact that they are there to be creepy or be used for humor.

What really makes Maria Holic a rather enjoyable show is how Kanako acts as she often switches from complete shock into lewd thoughts or something else as she reacts to everything happening to her. While we have all seen perverted male leads fantasize about women or have fountaining nosebleeds, Kanako is so incredibly perverted that she often finds herself passing out thanks to all of the blood she has lost from nosebleeds when she fantasizes about other girls, eavesdrops on girls talking about their underwear, or falling for Mariya’s numerous cosplay outfits. 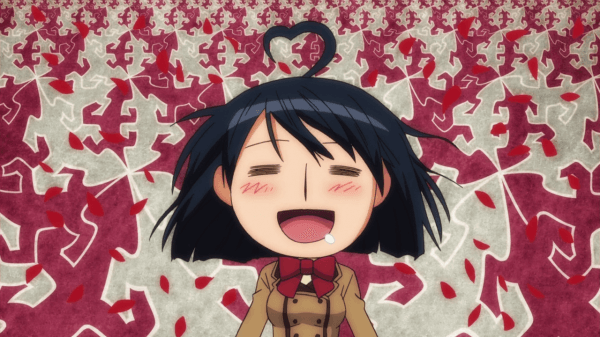 It goes without saying that a lot of the humor in Maria Holic is played off of Kanako and her lesbian antics. She is the butt of almost every joke, usually played on her by Mariya as he teases her with his cute looks and outfits despite being a boy, or his maid Matsurika bluntly inserting insults both towards her master and Kanako. While often funny, not every joke in Maria Holic hits home and a few of the running gags become tedious and overused halfway through the series which is a shame since Maria Holic is the best when it’s making you laugh.

Visuals
Now those familiar with the studio Shaft probably know what to expect from the company thanks to their signature art style and that style is very obvious in Maria Holic. The art style will often switch rapidly between the normal style that the series uses; from extreme simplification, to ridiculously exaggerated shojo art, to simple text, or even stained glass representations of events. With Shaft the viewer is always in for a treat as they never really know what will be coming next. 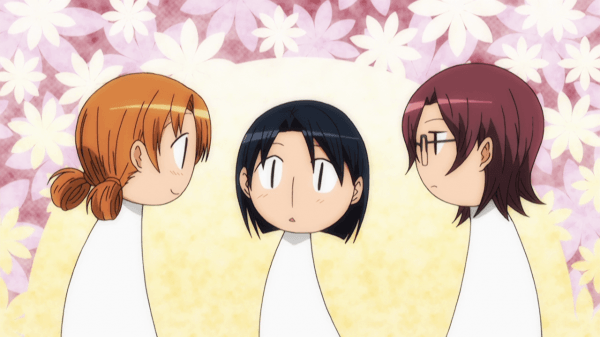 There is some bad to  go with this good as the company has clearly taken a number of shortcuts throughout the series as there are some really terrible looking drops in quality in normal scenes and other times that still images are overused or way too plain. That being said, this Blu-ray upgrade is a nice upgrade for fans of the series as the many bubbly shojo style backgrounds used throughout the series look amazing on Blu-ray while the characters themselves look even better than before. It is also worth noting that, considering the amount of text that Shaft likes to insert into their anime, Sentai has done a great job with their subtitle work and typesetting almost all of the signs that appear in the series.

Audio
Unless they didn’t bite the first time around, a lot of anime fans are probably looking at Maria Holic this time around thanks to Sentai Filmworks giving the series an English dub to go along with the Japanese dub. There is good news to report on this front as the main cast, Jessica Calvello as Kanako and Monica Rial as Mariya, deliver exceptional performances with these characters. Calvellos does a great job with Kanako’s numerous reactions and Monica Rial’s range works well with Mariya as he switches between his masculine and feminine voice. 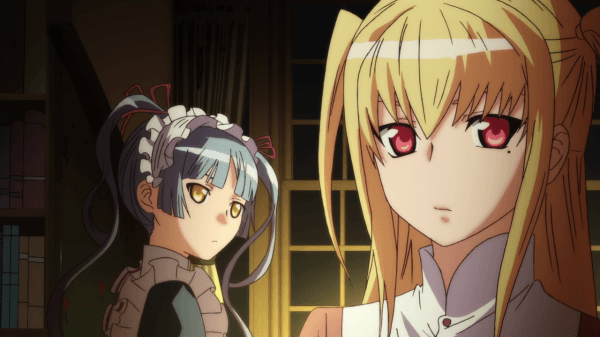 As far as the soundtrack goes, there are some rather enjoyable pieces of background music that play often throughout the series and stand out compared to your standard run of the mill tracks. The closing theme “Kimi ni, Mune Kyun,” by the three Japnese female leads is rather enjoyable and worth watching as the ending animation changes per episode and the opening theme “Hanaji” is an addictive number that will be hard to skip past.

Extras
There are a number of on-disc bonus features included in this release, though it is worth noting that none of it is extra anime footage. There are your standard inclusions such as Japanese commercials, promo videos, and a clean version of every ending animation, which is actually quite a treat. This is followed by trailers for other Sentai Filmworks releases and disc credits. 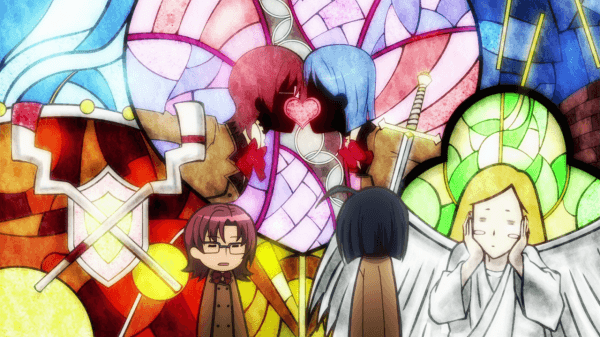 As for the meatier content, there is the Club AT-X Interview which is a twenty minute Japanese interview with the three female voice actresses that handle the primary cast, and the Special X’Mas Night ~ Amenokisaki Holy Night Festival which is twenty two minutes in length and features a Japanese event held in a church when the first episode was shown to attendees with appearances from the staff cosplaying as their characters wearing the uniforms of Amenokisaki.

Overall
Maria Holic: Complete Collection finally feels complete thanks to the new English dub handled by some great voice actresses. The show gives us a fresh look at the standard perverted main character by having it be a female lesbian in the form of Kanako. Her delusions and the fact that she is an idiot at the same time make her the ultimate gag magnet.

Unfortunately while most of the humor in the series is great and can easily be enjoyed more than once, a number of jokes fall flat and running gags begin to become predictable, halfway through the series. That being said, by being humorous and outlandish more often than not, let us hope that Maria Holic’s sequel will also be given the same English dub treatment as fans will easily want to see more of what the series has to offer by the time the last episode ends.