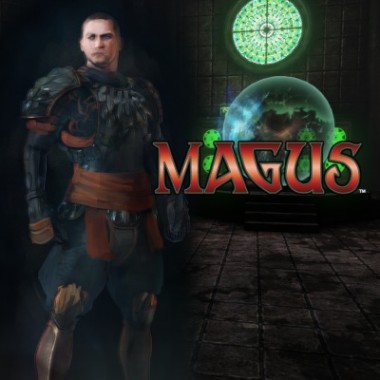 Overview
Developed by Black Tower Studios and Aksys Games, Magus is one of those titles that sneaks its way onto the stores without much in the way of hype. This also marks the first time game publisher Aksys has worked to develop one of the titles they’re publishing. How does Magus hold up? Will it surprisingly ascend to godhood or should it have been left in a dungeon? 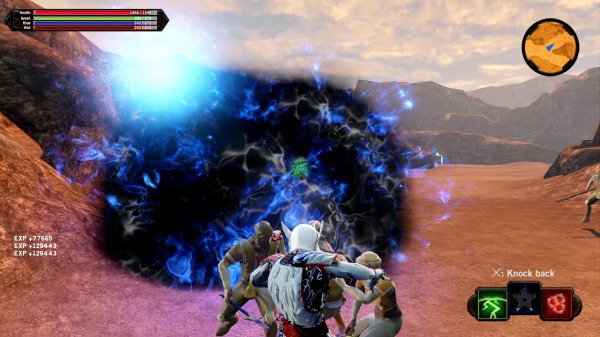 Story
You are Magus (pronounced May-juss). Locked in prison, you’ve resigned yourself to the fate of eternal imprisonment. One day, there’s a commotion raised when a young lady, who you come to know as Kinna, breaks into the prison to release you. After fighting your way free of the guards, Kinna tells you of your godhood, which has been dormant until now. Using various colored stones, you can cast an array of magics that will aid you. Now, you’ll have to travel across the world to claim  your place as a god and unravel the plot behind your lifelong imprisonment. 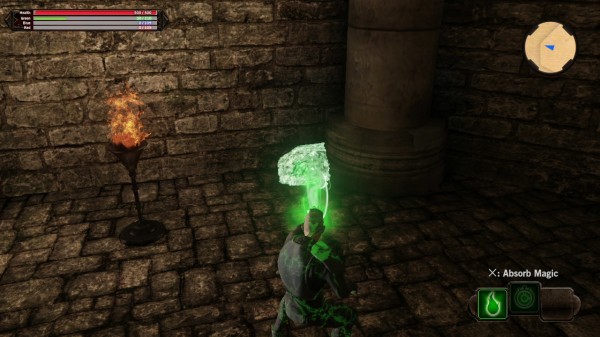 Gameplay
At its core, Magus is more of a third-person shooter than the perceived action-RPG it was being pitched as. When I typically think of an RPG, whether traditional or western in nature, there are some melee mechanics involved. Magus completely eschews the notion that you can strike someone with your hands, opting instead for projectiles and a reticle.

Magus is given three core schools of magic. They have fun and interesting names like “Blue,” “Red,” and “Green.” Each of the three has a fast primary attack and a slower, harder hitting secondary attack. You can swap between the active magic type on the fly to suit your needs, though not much variety is required from your gameplay, even on the hardest difficulty.

There are a grand total of five different levels to play through. When you start out, you can choose from four different levels: Desert, Mines, Graveyard, or a tropical island. Enemies from each level are unique to their setting, giving you undead to fight in the graveyard, unicorn-like creatures in the mine, and so on. As you play through each level, groups of enemies will spawn, swarming you and leaving you to take them out. Unfortunately, this is how literally every encounter outside of boss battles happen. 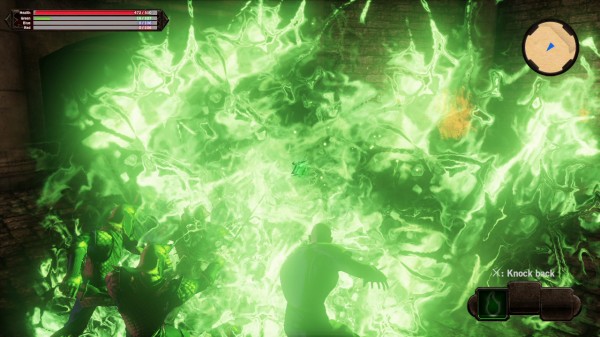 Boss battles feel terribly underwhelming. You’ll spend time in each level mowing through dozens of the same two to three enemies until you reach the boss. The boss battles are no more interesting. I was able to beat the vast majority of the bosses in the game without ever taking a hit, using the same basic tactics I’d used to steamroll all of the earlier enemies.

Your partner, Kinna, throws a big wrench in the potential difficulty of Magus. It doesn’t help that enemy AI is fairly stupid. Kinna will run around, fighting enemies with you. Those enemies will often swarm her, leaving you completely open wreck shop. I found that using the blue magic’s heavy attack, which acts almost like a grenade, was more than sufficient for taking out swarms of bad guys. Herein lies one of Magus‘s most conflicting aspects for me. It’s terribly satisfying to take out 10-15 enemies with a handful of attacks. It virtually breaks the game, though, presenting absolutely no challenge under any circumstance. If you stand still, you’ll get wrecked, but if you keep moving and just peck away at the groups of enemies, you’ll be unstoppable.

As a way to present a little variety to the game, there are three fully fleshed out skill trees – one for red, blue, and green magics. Red will grant you necromancy skills, blue offers you various buffs and support skills, and green focuses on combat magic (such as fire, healing, and earthquakes). As you gain experience and level up, you get access to more and more of the skills. These can grant a fun bit of variety to the game (like turning into a titan and kicking guys around or increasing your speed for faster travel and attacking), but they’re ultimately superfluous. In my experience, the only skill I really used was the blue speed boost, which not only let me travel faster but also increased my attack speed. I also found a blue area of effect skill useful for corralling enemies and executing them all with a single attack (including bosses). 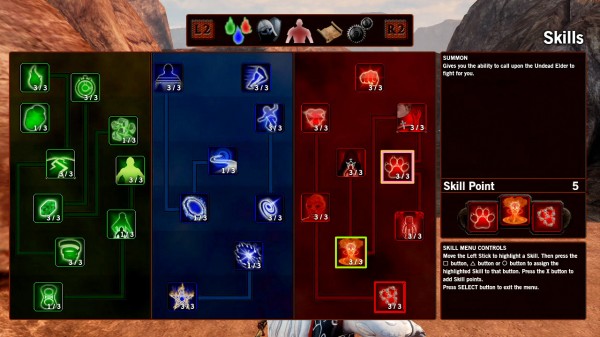 As far as gaining experience and leveling up goes, a good run through a level can generally net you 2-3 levels, allowing you to hit the level cap with a handful of level replays. You can put points into one of six categories: strength, dexterity, vitality, red, blue, and green. Calling the categories “strength” and “dexterity” feels like a misnomer, given the classic sense that melee damage, dodging, etc., are affected by them, where magic was always affected by intelligence or the like. I felt like it was all pointless, simply trying to let players feel more powerful because numbers were incrementing.

As you play through Magus, you can get new gear to equip. Your gear layout is quite limited, granting you only a few slots: helmet, armor, belt, earring, ring, tattoo (yes, a “tattoo” slot you can never see). The gear affects your pointless stats and, with the helmet and armor, changes your looks. None of it is really impressive or eye-catching, though, and the vast majority of it is bland and lifeless. It felt like there was no soul in it. 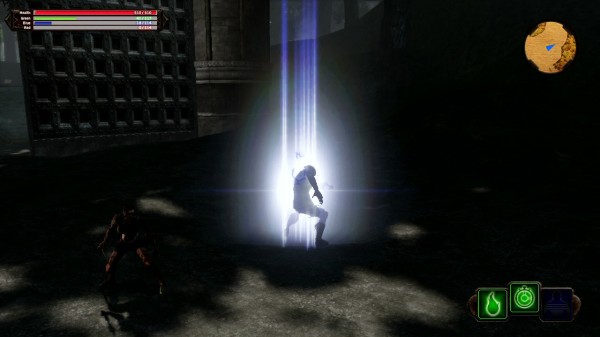 Visuals & Audio
Magus is an ugly game. The graphic fidelity looks like something that may have passed on the PlayStation 2, but in a time where studios are creating jaw-dropping titles like The Last of Us or Uncharted, it’s hard to go back. The lack of variety is also a bit stifling, with only 2-3 models for armor and helmets and a handful of enemy designs that are used ad nauseum. It’s all also fairly generic and uninteresting to look at.

The sound design is somewhat mixed. The music can be catchy at times and the voiceover work is actually much better than I would’ve expected, given the rest of the game. At the end of the day, though, it’s all forgettable, serving its function with no lasting impression.

Overall
Magus is not a good game. Bland, low resolution visuals, forgettable audio, an uninteresting story, and a lack of variety do little to leave a positive lasting memory. The combat can be fun, especially if you enjoy feeling utterly powerful beyond control, but the repetitive nature of it leaves it feeling like nothing more than a very easy grindfest. It’s also quite a short game, beatable in only a handful of hours. This would have been better served as a downloadable title with a price to match, instead of a budget title playing out of its league. If you’re interesting in this style of game, I would urge you to consider other options, like Earth Defense Force 2025.