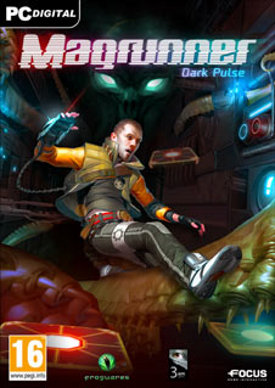 Overview
One of the most interesting aspects of Magrunner: Dark Pulse is one of the hardest for it to rise above. Being likened to Portal is sure to get almost anyone on board to give it a try, but also means that Magrunner also has very big shoes to fill in that regard. Throw in Cthulhu and the attention of Lovecraft fans is also a given. With both of these, Magrunner has the makings of an outstanding game or a colossal flop as players are left wanting something more. Now that the game has released it is time to see which of the two situations is true. 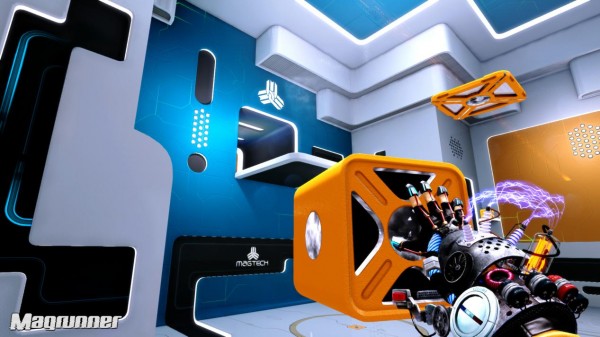 Story
Set after the invention of a clean renewable energy source known as Magtech, Magrunner opens ups on the at the start of a competition/exercise where the titular Magrunners will be utilizing newly designed Magtech gloves to complete a series of rooms first alone and then as a team. This means shiny new news with clear goals and nice looking equipment to use, while the player is introduced to their character of Dax Ward, possibly even a reference to the main character in “The Case of Charles Dexter Ward” by H.P. Lovecraft. A true tech savant, Dax not only has made his own Magtech glove, but was also mainly raised by the six-armed Gamaji after losing his parents because who doesn’t love an underdog.

Being mainly a puzzle game, the story takes more of a backseat to the gameplay, which is all well and good in the long run. Aside for a slight information dump introduction, the story progression is generally kept to between rooms and when first entering a room. This is of course a necessary evil when needing to move from room to room, which Portal filled with dark comedy or absurdist humor, but Magrunner fills with narrative development. Seeing as this is also based on Cthulhu it isn’t too long before everything starts to go to hell, literally. 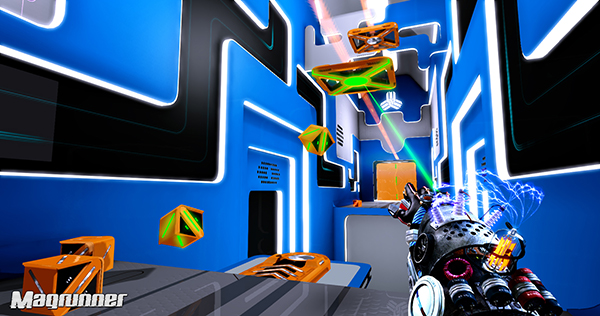 For the most part the narrative is a great addition to the game, not intruding too much, but there are a few minute problems. Closure for one, which has nothing to do with the ending that’s great especially for those familiar with Lovecraft’s work, but with the other characters. Throughout the game Dax communicates with several people, some within the complex, but unfortunately many of them lack closure and outside of one insistence of indicating a wish to save those in trouble, Dax doesn’t meet or interact with anyone besides enemies. Instead Dax only speaks with them over the comms and ultimately undermines any connection players have with those character. However, as the game is mainly about the gameplay it doesn’t hurt the entire experience much overall.

Gameplay
At first the gameplay of Magrunner is incredibly straight forward, Dax is equipped with a special Magtech glove that can change the magnetism of specific objects. Shoot an object with one color and it will be attracted to other objects of that same color and repelled by objects of the opposite, shooting it with the opposite with reverse this, and shooting it with the color it already is will return it to neutral magnetism. Fairly straight forward when actually in gameplay additional features are added as the game progresses, such as creating one additional free-range charge not tied to an object. 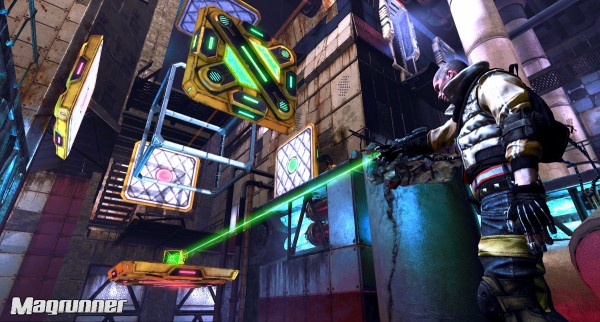 Amazingly intuitive, it is easy for those even somewhat used to the concepts of magnetism to sprint through the first through areas. As time goes on however it becomes important to know where magnetism is affecting through walls, which is why the game also provides the ability to see the magnetic fields around objects, which becomes immensely invaluable. As great as the puzzles are though, there is a feeling that so much more could have been done with more puzzles, as in some places it seems as if some of the puzzles exist to teach a strategy and move straight on with something else even late in the game. While have over 40 rooms, it would be nice to see even more or advanced puzzles for players to tackle.

Other aspects of the gameplay that don’t quite work as well as hoped are the cutscenes and saving. Several instances have control of the camera taken away to show off a creature surprise or cool visual, but while these do look nice they disrupt the immersion. The saving on the other hand is understandable in some regards, though still problematic. Players cannot freely save whenever they choose, forcing them to use the checkpoint system in place in the game that is tied to ”safe” or progress locations in rooms. While more likely easier to program it can be annoying to miss the last jump to reach the next checkpoint and have Dax plummet to his death having lost all of that progress and being returned to the previous checkpoint. Even more problematic is the one instance of getting a checkpoint just as Dax is killed and being forced to restart the entire level as no previous checkpoint could be loaded.

Visuals and Audio
The images in this review can certainly speak for themselves with how well the game is able to combine futuristic, with decrepit, with Lovecraftian. The puzzle elements do a fantastic job standing out amidst the changing environment, ensuring that it is easy to determine what can and can’t be interacted with, which is incredibly important in a first-person game. Magrunner also features monsters such as the Deep Ones, Mi-Go, Shaggoths, and Cthulhu himself, the game does a great job presenting presenting the world and transitioning well enough between them all that they feel that they fit completely within them. The characters are also well designed, even with the little that is actually seen of them. 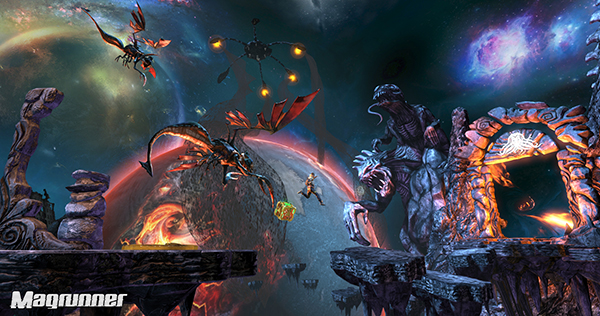 The voice acting is likewise well done across the board, though Gamaji has the best delivery of them all, while a few moments of Dax’s dialogue, even early, feel a bit off which is unfortunate as players spend the most time with him. The music adds to both the atmosphere and tenseness of the scenes, but not nearly as much as the instances of the chanting in the background paying honor to Cthulhu sleeping in R’lyeh in a way that looking up at him can certainly send a chill through the spine. So by all means play all alone in the dark for this one.

Overall
Magrunner: Dark Pulse is a greatfirst-person puzzle game that provides a fun and unique challenge for the brain and moments where Dax is running for his life from horrors that provide great horror fun. There are a few issues that can sometimes put a hamper on the experience, like the saving, but for the most part players should have an overall positive experience with the game. Outside of those, Magrunner is great for puzzle and/or Cthulhu fans that might even leave them wanting more.