Overview:
There are types of games that lend themselves to mobile devices and there are types that simply should not see the light of day on them. The platform itself is still relatively new territory for gaming when you consider the mediums long history. So you’d be excused for thinking that it the platform is still finding it’s footing. Unfortunately though until it does find it, games such as Mad Wheels will pile into the virtual landfill known as iOS gaming. 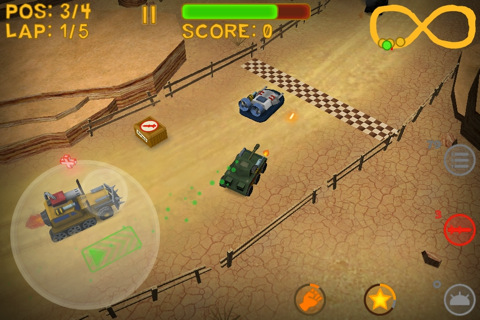 Gameplay:
Let me start by saying that Mad Wheels isn’t necessarily a bad game, it’s just not even close to being a good game. On a functional level, it works. But on the grand scale of things, Gamaday clearly had no intentions of creating anything other than a functioning racing game. They never seemed to strive for anything more and thus, Mad Wheels is mediocre by every sense of the word.

The game as you can tell from it’s title is a racing game. It is for the iOS and as you most likely know, racing games don’t have the best track record (pun intended) when it comes to the iOS. Mad Wheels just adds another to the list.

The control scheme is put simply, a mess. It is impossible to master this often unresponsive control system, which requires one thumb to steer your vehicle with an on screen control stick and the other to tap tiny icons to use weapons. This would work if both of these controls would respond properly. They either do not respond at all or respond late, which in a game such as this is just not acceptable.

The racing itself is bland, awkward and unenjoyable. There is next to no incentive to continue playing and is more likely to turn a player away than to maintain their attention. Even for casual play this is pushing the human minds attention span to its up most limits.

That isn’t to say the game is all bad, there was potential here. It would have been half decent if even an ounce more care was put into it’s development. As it stands the game feels and plays like a freeware title, which is never a good thing when you are trying to sell it to a large market. It’s a shame because the game does show signs of potential, if it had only had more care put into it’s creation. 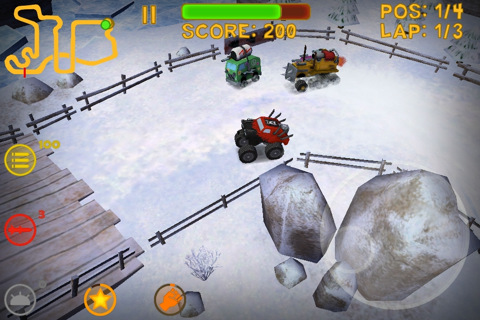 Visuals:
The graphics of the game are decent and do the job they need to do, however they are quite bland. The visuals do not stand out in any significant way from the sea of other racing games for the iOS, but on a functional level, they work. It looks like a racing game, thats all Gamaday tried to do and it is all they achieved.

There isn’t anything too impressive here and that doesn’t just speak for the visuals but the entire game in general. It’s very lackluster and most definitely required more nurturing during the creative process.

Audio:
The music for the game was average and didn’t even try to leave an impression. It did what it had to do and called it a night. Perhaps they were playing it safe? Whether that was the case or not, it is unfortunately mediocre and forgettable.

With a game called Mad Wheels I expected some more exciting music to justify it’s title. Instead the game subjects you to the soundtrack of nearly every other racing game for the iOS, random generic rock music. It’s just sloppy and ultimately disappointing.

Conclusion:
All-in-all, Mad Wheels is a game that doesn’t strive for to much, and rightfully so achieves very little. It is a basic racing game that doesn’t always work the way it should. It is playable but little more. I will reiterate one last time, this game could have been much better. It had a great deal of untapped potential which is evident throughout the game but it never even seems to grasp for anything other than proper functionality.

Therefore I give Mad Wheels: