Everyone likes a werewolf right? Well Brawsome games and Ayopa Games have developed a werewolf game unlike any you may have played before. With a unique blend of comedy and mystery, MacGuffin’s Curse is a dark horse waiting to be unleashed on the world April 19th. 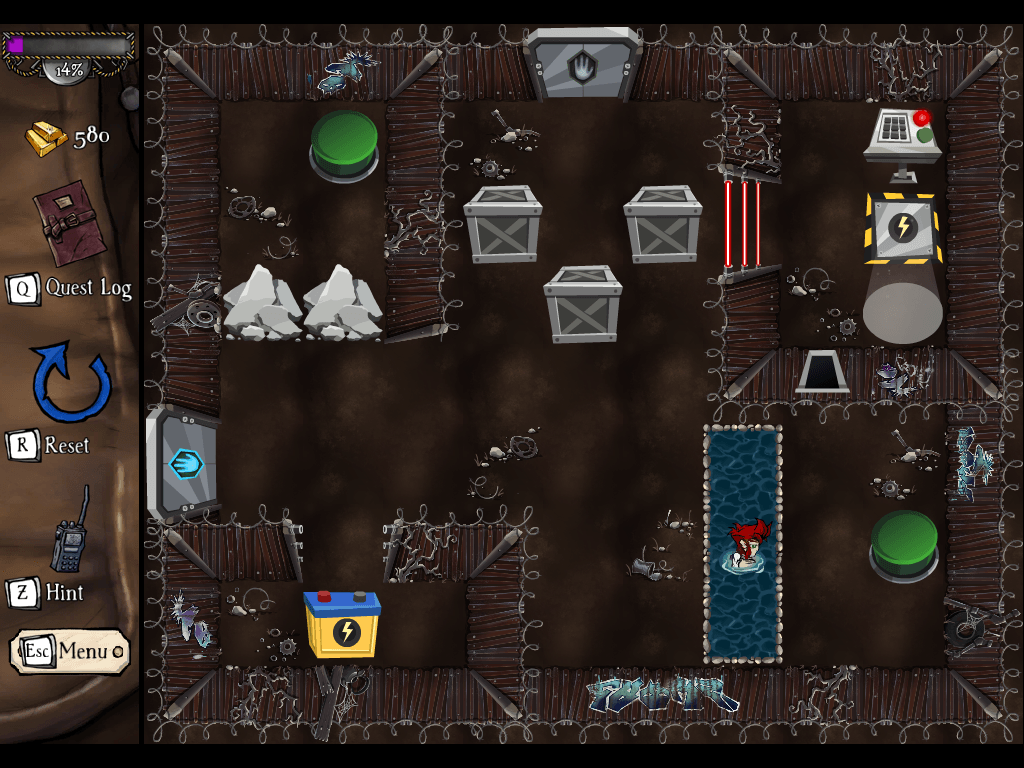 The game begins with a poor man attempting to pay the rent. Doing what anyone would do, he tries to rob a museum. Things go incredibly wrong when an amulet he tries to steal transforms him into a werewolf. The story is a little bizarre, and may not be the tightest narrative ever told. But it’s certainly original. Moreover, the idea of tying this story to the gameplay style of MacGuffin is rather interesting. The werewolf’s rage and strength, elements perhaps one may think are better suited to an action game, work well in this puzzle based strategy title. The story has more elements to it that unfold in a deductive way as you play through the game. Crimes have been committed, a city is in lockdown and everybody is looking for answers. To reveal anymore really takes away from the story, but I will say this. MacGuffin’s Curse takes some rather, unorthodox, elements; a werewolf, a detective story, and puzzle based-strategy gameplay style, and creates a rather title that may surprise you. 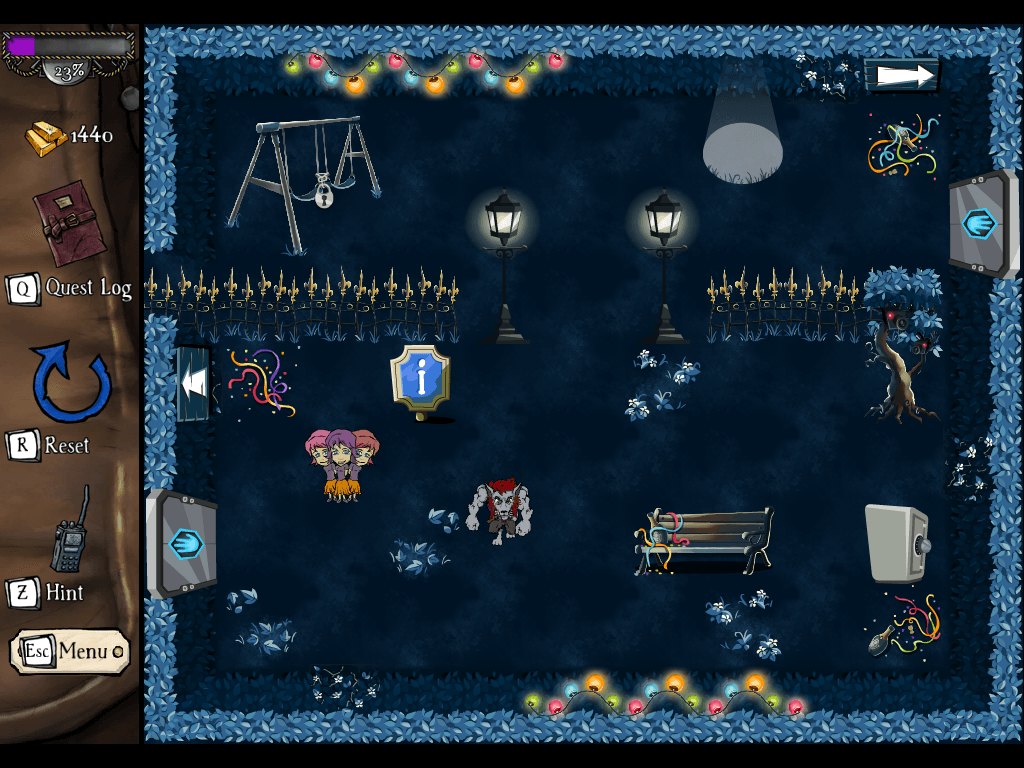 The gameplay is predominately puzzle based, featuring point-and-tap movements to get around. Tapping elements can interact with them, like tapping during moonlight to transform into a werewolf. Puzzles will require you to switch between werewolf and human to interact with certain objects and complete the puzzle in time. The werewolf utilises his superior strength while the human form has nimble hands and can swim, rather than sink. It took some getting used to, but the method of moving by dragging across the screen is well executed. Traditionally, there would be an on screen directional pad and possibly some on screen buttons – but MacGuffin’s Curse utilises the whole screen of your iOS device. The puzzles do become rather difficult, and new characters appear with new missions for you to complete. It may come as no surprise, but completing new missions unlocks new areas in the town, after all it has been locked down due to your thievery. This is where the story gets played out rather well. Areas are sandwiched between two doors. To get to the next one, you will need to complete the puzzle and give power to the door in order to escape. There are a few inventory items that make moving through the world a little easier. Items such as the map, and the quest log help you stay on track of your newly assigned goals. A nice little feature too is the collection of comic book sections, although I have not collected all and don’t know what the ultimate goal of these are. Just one more layer of mystery to the title! 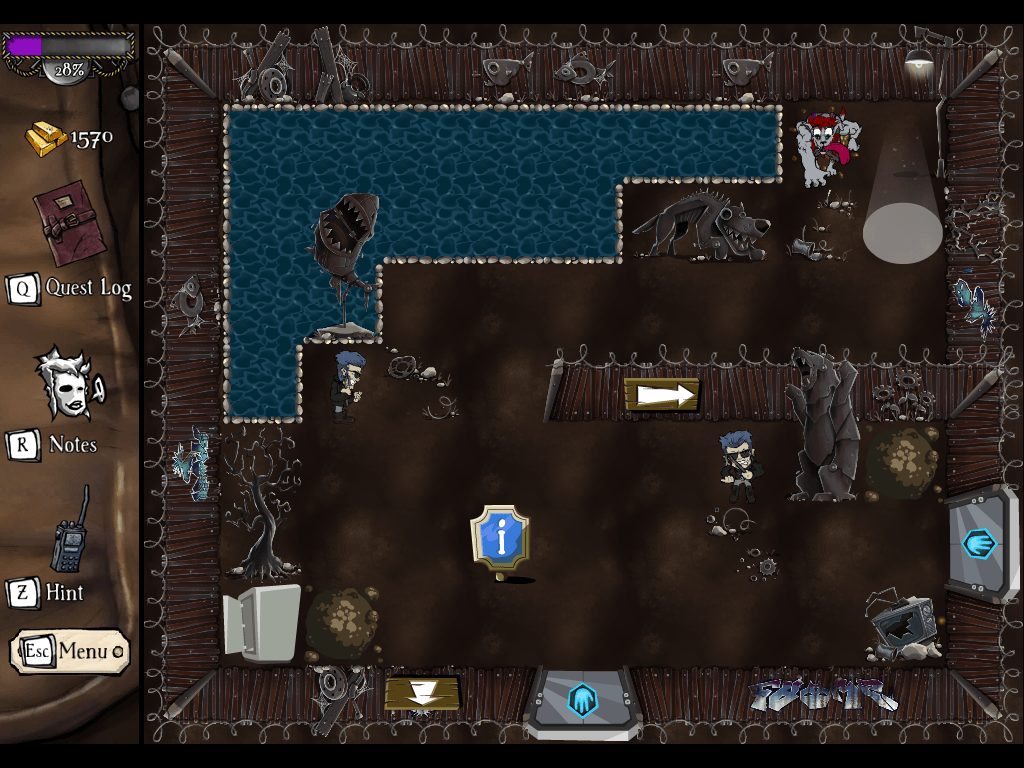 The visual quality is a little irregular. On the one hand, the comics are magnificently drawn with a watercolour style. Although, this doesn’t come into effect all that much as viewing them is up to the players digression and not directly engaged with in gameplay. The elements in the world seem to sit oddly together at times, having a strange, layered look about them. This does help when completing puzzles, but the attempt to add depth to the ‘everyday’ game environment falls a little short of perfection. The character sprites seem a little strange when moving through the game. However, when engaged in conversation they come to life with a wonderful hand-drawn look. The colour schemes are well done for the theme of the game, with slight differences between areas but an overall sense of gloom. The music does well to work with the visual themes of the game, and each area has slight variations on similar tunes to give them their own unique atmosphere. Sound effects are not overly obvious, but this is a nice touch. They appear when necessary and are never thrown at you with too much force. 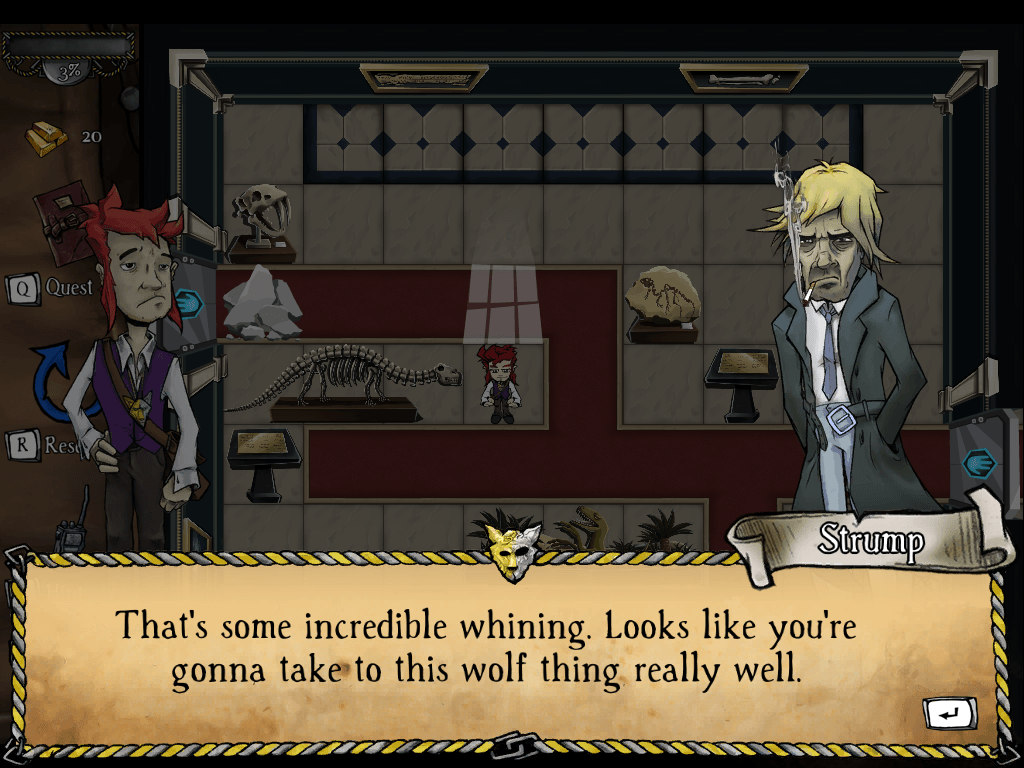 MacGuffin’s Curse is a bit of a dark horse. If you’re the shallow type who is going to judge a game on it’s visually appearance straight away, then I implore you to take a second look. As I said, the graphics may appear irregular, but there are some fantastic elements lying around within the game. Give it that extra few moments and let the puzzles develop into challenges. The game starts slow, even in terms of the story being a little perplexing, but once the mystery elements begin to integrate with the games puzzles the title comes to life. It may be a small title, but it has the power to keep you engaged and continuously playing.