It’s been a while since I’ve played a fun tower defence title on iOS, so thankfully Little Bit Evil has arrived to quench my thirst. Featuring some adorable graphics and a lengthy, challenging campaign, Russian developer Crazy Panda Games has a top quality game on their hands! While not perfect, Little Bit Evil is a strong recommend to strategy fans looking for great time waster on their mobile devices. 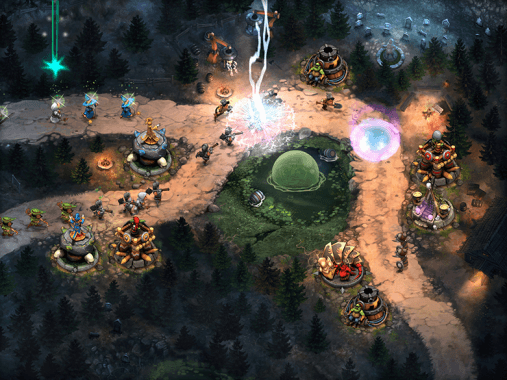 Little Bit Evil isn’t an extremely technical tower defence title, but it’s not too casual either, maintaining a nice balance welcoming to all types of players. It’s gameplay is as traditional as it can be, where players must build towers in particular areas to stop hordes of enemies reaching the goal you must protect. By killing opponents you gain souls, which can be spent on upgrading your towers during combat to assist you. A nice touch included is that by collecting currency from victories, players can also permanently upgrade the stats of their towers, making them stronger than they normally would be. This adds a nice RPG element into the mix and another layer of strategy to give players an edge in combat, and players will need all the help they can get as difficulty is intense. Levels are rather lengthy with huge amounts of waves per battle, as your opponents aim to make it a war of attrition to slowly wear you out. However it seldom feels like it’s impossible, so fighting for your life doesn’t seem so bad. Furthermore special moves are included to you are able to personally contribute to combat via lighting strikes and calling out a massive hulkish demon that a “little bit evil” itself. Levels introduce new enemies with information to mix things up, but it should be noted that the game doesn’t explain itself very well, making it an experience where you need to teach yourself for the most part, which isn’t that hard as most things are self explanatory. Still, it could be something to consider improving. Besides the additional challenge modes added to each level, there’s nothing more to say about Little Bit Evil. Controls are simple and work fine and it plays exactly as you’d imagine it would. It isn’t entirely creative, but it doesn’t aim to be incredibly unique either. It’s just a solid game that plays good. Simple, but good. 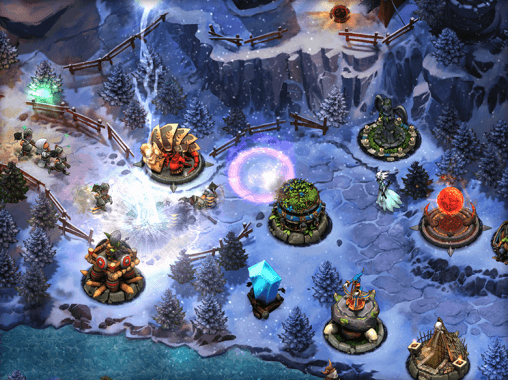 Little Bit Evil is charming, filled with charisma with engaging graphics to entertain the player. However, animations can be choppy and don’t always flow as well. A small, nit-picking problem I personally found is the character designs don’t really suit the characters. What I’m referring to is you play as the trolls/orcs/monsters/whatever you want to call them, while you fight a bunch of clumsy, chubby, non-threatening humans. While designs all look great and adorable, there is no fear or threat from the people you must mindlessly slaughter which is a massively missed opportunity for the game. Audio is also a bit of downer, with a cringe-worthy theme song in the intro and a soundtrack that doesn’t loop very well at all. It feels as if Crazy Panda cut corners here, as making a looping soundtrack really would’ve been a lot better, as the awkwardly faded out songs with silence between the tracks can really lower the adrenaline of a match. Voice overs are great and sound effects convey the action well, but sadly the soundtrack doesn’t reach the same standard.

Little Bit Evil is a simple and fun tower defence title. Gameplay is straight forward and fun, but also challenging. Visuals are cute and controls are solid, but sadly the soundtrack, confusing concept of character design and presentation of tutorials let it down a little. Regardless, Little Bit Evil still stands as a good example of strategy gaming on iOS devices and is definitely worth picking up if you’re into the genre.