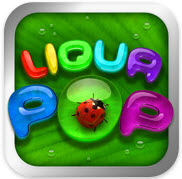 Hop on board the latest match-3 puzzle game from EA and help Toadie the frog reach the very top of the stem. The only way he can reach the top though, is if the player helps by popping as many bubbles as possible. The game operates the same as many other “match up colours” puzzle games work, much the same as Bejewled or Tetris (without the cult followings of course). However, unlike the former mentioned games, Liqua Pop gives the player a little background story to help in persuading the player to keep playing. In my opinion the game would work just the same without the existence of Toadie – who I often forget is even crawling his way up the side. Nonetheless he is a nice little touch. 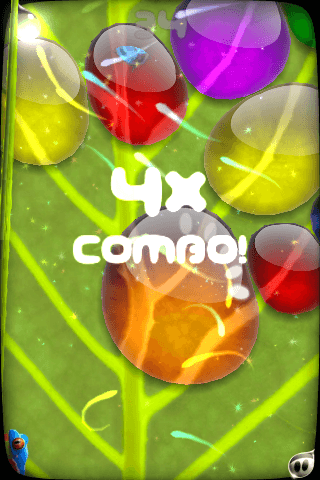 The goal of this game is to drag matching coloured bubbles towards each other, forming a bigger bubble. When four of the same colours are joined a timer begins and the bubble is set to burst. Each burst brings Toadie the frog closer to his goal – all coveted shiny bubble at the top of the stem! By dragging more than four matching colours together, it’s possible to gain more points. The player also has the ability to join multiple groups of colours to get a multiplied score if they are all popped at once (done by shaking the iOS device). But if they’re not quick enough, the screen will flash red, which causes a game over very quickly. 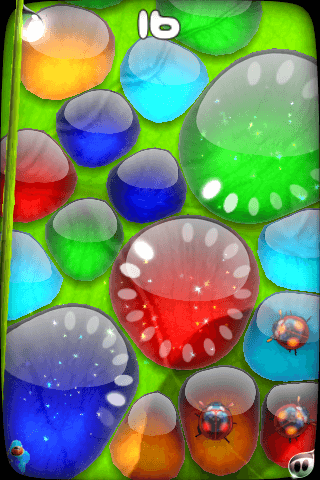 While this game doesn’t have highly complex gameplay, EA and iChromo have mixed the mundane match-em-up puzzler formula up by introducing some variables in the form of bugs. Bugs are released when the bubbles they are contained in are popped, with different bubbles causing different effects. The bug’s abilities range from obstacles like removing bubbles colours, creating black bubbles that can’t be joined, or spinning all the bubbles around in a chaotic tornado. While it can be pretty frustrating dealing with these obstacles (personally I really enjoyed freeing the tornado bug!), Liqua Pop also offers bonus bugs, who either give the player more points, send out a wave of spikes to pop surrounding bubbles, or convert all the surrounding bubbles colours to whatever colour contained the bug.

While the game has different levels, they don’t vary all that much, apart from a slightly different background or the appearance of more bugs. While this does make playing the game slightly more difficult as you progress, it doesn’t really provide much in terms of variety in gameplay. But then again, this is generally the same for most casual puzzle games. 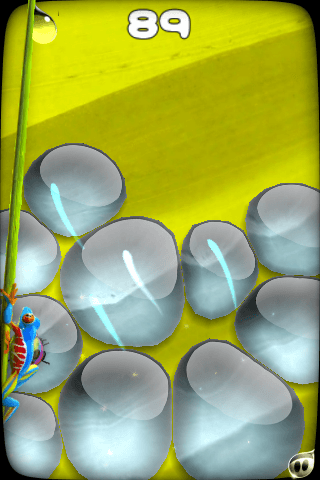 The high point of this game really is the graphics. By utilising a liquid simulation feature, the game really captures the movement and look of water droplets. This is most notable when dragging bubbles around and they way either bounce off each other or morph together. With the rules of the game particularly easy to grasp, not a particularly strong background story, and the means of play being incredibly easy, the graphics seem to be the real driving force behind the game. In terms of audio, the game doesn’t have much to offer. Liqua Pop boasts an ambient marsh-themed audio track, with appropriate popping sound effects and a little victory chime when the level is complete. While these all suit the game well, the audio doesn’t stand out as a notable feature of the game. 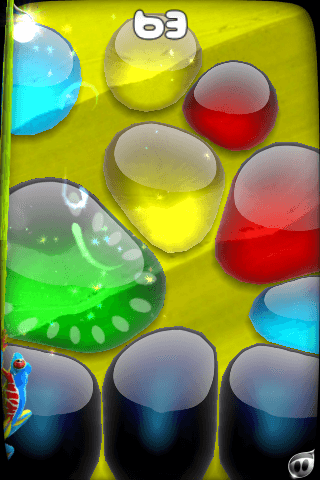 If you’re a fan of games like Bewjewled, and looking for a little time killer, then “hop” on you’re iPhone or iPod Touch and have a play of Liqua Pop. However, for those of you who are looking for a little more story, and a little more interactivity and complexity, this game is probably not be up your alley. While the game might be fun when playing, but doesn’t really have that hook that’ll get you wanting to come back and play more for extended periods of time.