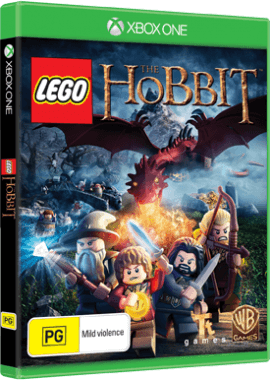 TT Games release a new Lego Game every year and it can be hard to keep a franchise fresh. Sure, every new game brings with it a few new features to keep it interesting, but it is usually the same gameplay over and over again. Well Lego The Hobbit does away with all that, and manages to keep the traditional Lego styled gameplay, while revitalising the franchise and mixing in some really cool RPG elements. Coupled that with The Hobbit’s timeless story, and brilliant voice acting and you’ve got yourself a complete package that might just be the best game of the year so far. 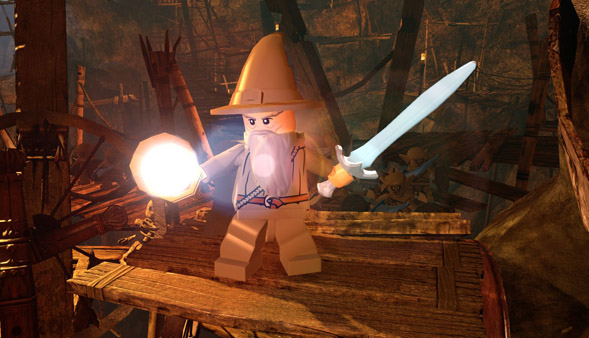 JRR Tolkein is one of those writers who’s work is still delighting and entertaining people around the world almost 100 years after it was initially published. Whether it is the original books, or Peter Jackson’s film adaptations of Lord of the Rings or The Hobbit, you would be hard pressed to find somebody who doesn’t know the tales of Middle Earth and about the diminutive hobbits.

Lego The Hobbit draws heavy inspiration from the film adaptations of The Hobbit, replicating the tone and pace of the film as well as telling the plot in a succinct and direct manner. I am a massive fan of the Lord of the Rings films but one problem I have had with the first two Hobbit films has been that they have felt like they dragged on, with many scenes that don’t add anything to the plot. Luckily, a lot of the dialogue has been cut down and creates a story that flows almost better than the source material. Not only that, but some of the superfluous action sequences from the movies (like the battle of the Rock Giants) actually feel better as a video game set-piece than they do on film. 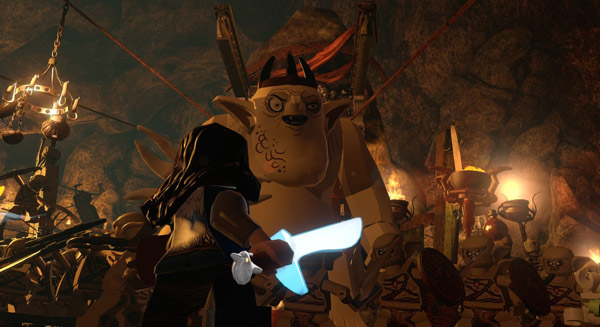 If you have played the demo for The Lego Hobbit, you may be thinking to yourself that it seems like another typical Lego game. Well let me tell you that it couldn’t be further from the truth. The Hobbit is a massive departure for TT Games’ Lego franchise, and it makes a lot of really cool changes that are definitely for the better.

The basic level structure is the same; you start your level then after being introduced to it through a cinematic cut-scene, you have to make your way through the stage, collecting Lego studs and building objects to solve puzzles. Each character has their own unique skills and abilities that can help you get through the stage. Each of the dwarves has a different skill or weapon that they can use – Fili has a shovel that can dig up hidden objects, Kili is the only character with a bow until the later stages of the game. Bilbo eventually gets access to The One Ring, allowing him to turn invisible and build objects out of invisible wraith-blocks etc.

Lego The Hobbit also takes the construction kit building mini-game from its predecessor, and presents it in a whole new light. When you have enough “loot” to build a piece, you are taken to a mini game where the object builds in front of your eyes, requiring you to find the right pieces when prompted. The quicker and more accurately you can do this, the move studs you earn. 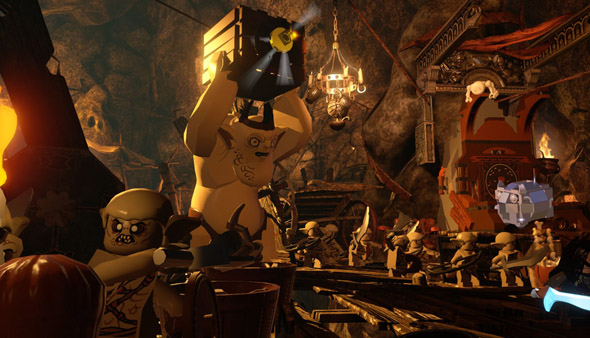 “Wait, did he just say loot?” Yes avid reader, I did. Lego The Hobbit introduces a brand new Loot system to the game. Loot can be obtained in a variety of ways, and come typically in the form of ores (like Copper, Saphires, Gold etc), food (chicken, carrots or bread) or construction equipment (wood, stone, rope). These can be found by digging them up, breaking lego objects, or defeating enemies. There are also traders found throughout the world that will offer up X amount of their goods, for Y amount of yours.  Loot is used to forge new weapons and items, as well as finding a certain amount fo complete side-quests in the game (one NPC requires 500 carrots before you can purchase him as a playable character).

The game features a tonne of side-quests and exploration to do. You will be travelling through a section of Middle-Earth, or a level of the game and you will find areas that can’t be accessed at that point in time, or weapons that haven’t been unlocked yet, prompting you to head back when you have the requisite tools or characters to get the job done. Side-quests although aren’t a main focus of the game, do really add to it, while providing a more tangible reason to collect the game’s many bits and pieces. 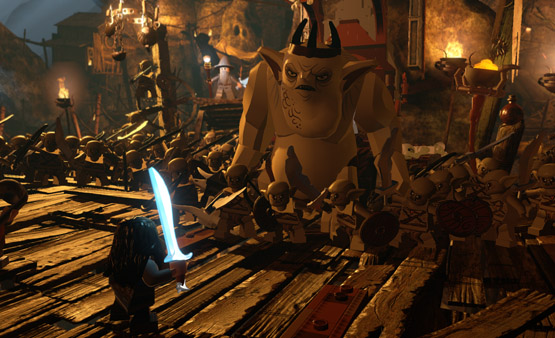 The Loot, how you find and forge items, and the side-quests really give the game a very RPG feel. Sometimes you will need to scour back over the world to find enough copper or stone to complete that new weapon. It adds not only to the replayability of the game, but keeps you exploring and manages to draw out the gameplay experience to be as long or as short as you like. Forging weapons out of studs and Mithril Bricks can lead to gameplay enhancements, like more damage output or higher stud worth, but they can also be traded to NPCs for Red Bricks (for those who haven’t played before, they enable cheats in the game).

You also have the opportunity to walk through the entirety of Middle Earth (at least, the parts that we see in The Hobbit films), in an open-world environment. Now, Middle Earth is HUGE and exploring it is a lot of fun, but you don’t actually unlock mounts like Horses, or fast-travel via Eagles until the second half of the game (when the Desolation of Smaug takes place), so exploring is a little bit hindered up until that point. 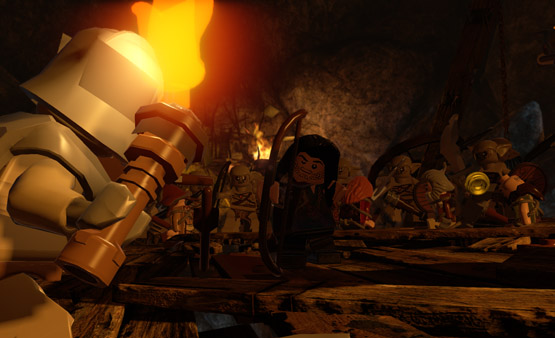 I will admit, I was not sure how well next-gen technology would impact on the look of a Lego Game, especially after there were no discernable differences in The Lego Movie Videogame. What I got when I loaded up The Hobbit really did surprise and wow me. The world of Middle Earth is rendered beautifully, with each set piece standing out as a marvel to look at. From the shores of Rivendell to the Mountain of Eerbor, each set piece looks unique and distinct, while retaining the true feel of the series (There is even a little sign in The Shire out the front of The Green Dragon, for die-hard fans to take a look at).

Lego The Hobbit doesn’t render the entire world in Lego Bricks like The Lego Movie Videogame does, and instead goes back to having only intractable objects made from the colourful blocks, and while I was somewhat disappointed I can see how it makes it feel more in line with Lego The Lord of the Rings, so it isn’t the worst thing in the world.

The character models all look practically identical to their film counterparts… you know, if they were made of Lego minifigs. Everybody looks the part, with of course a little Lego flair added in (like the elf-ears being part of their hairpiece). 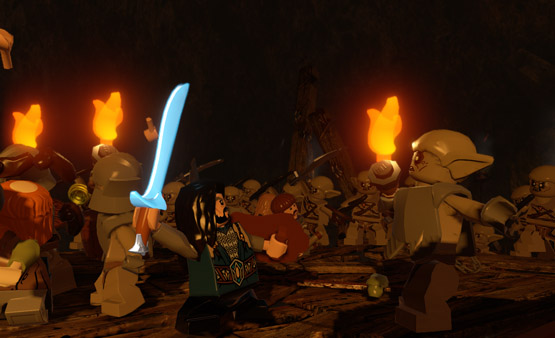 Since Lord of the Rings was adapted to the Hollywood blockbuster franchise, the actors have become synonymous with the characters they portray. This isn’t just a visual thing, but also extends to the voices and mannerisms of every single denizen in middle earth.  Much like its predecessor; Lego Lord of the Rings, The Hobbit takes the voice work and audio tracks straight from the film.

Taking the audio out of the film has a two-fold effect. Firstly, we get to experience the narrative of the Hobbit almost identically to how it is shown in theatres (with a few omissions in dialogue to help things flow a little better, and to trim down the clutter). In addition, this provides a sense of authenticity to the product, and really lets you relive all of the magic of the movies in Lego form. Having Martin Freeman’s amazing performance as Bilbo, or Benedict Cumberbatch’s terrifying work as Smaug really do add a lot to the game and make it feel like a complete experience. 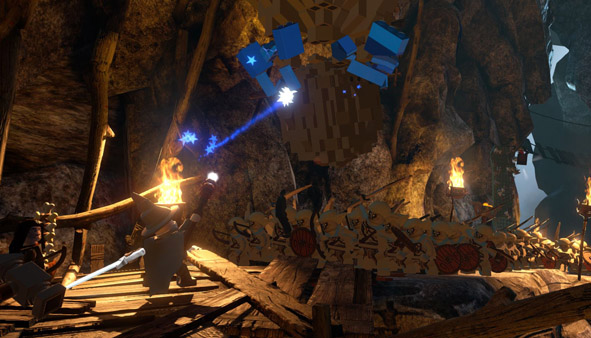 Lego The Hobbit has the whole package; It is a game that is accessible for young and old, presents a compelling and entertaing story, manages to shake things up without letting go of why fans love the franchise in the first place, and be a film tie-in, without ruining the legacy of the IP. While it only covers the first two films in the franchise (for obvious reasons), it in no way feels incomplete, and with DLC coming alongside the release of the third movie, there is a promise of more greatness in the future. Lego The Hobbit is definitely one of the best games of the year (as young as the year is), is the best Lego Game to ever be produced, and is by far the best videogame to make use of the Lord of the Rings/The Hobbit licence. 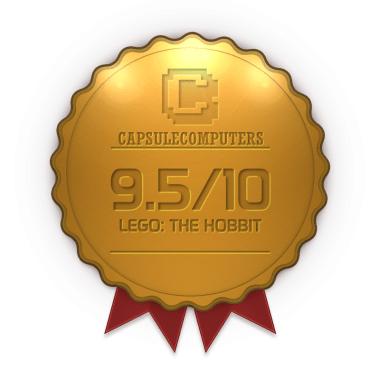