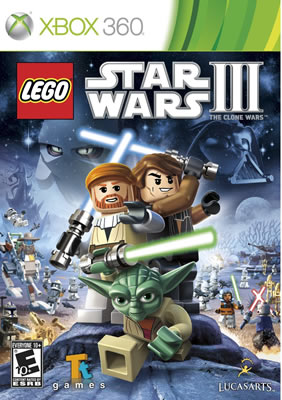 When LEGO Star Wars: The Video Game was first released back in 2005, it was obvious that Traveller’s Tales and LucasArts had come up with something special. Half a decade and a multitude of franchises later, the LEGO series of video games still remains one of the most popular on any console. With the stories of the Star Wars films told from start to finish in the game LEGO Star Wars: The Complete Saga, there seemed to be nothing left for the series…but when there’s a will, there’s a way, and – as all game companies do – LucasArts and TT Games have found that way.

LEGO Star Wars III: The Clone Wars declares that players will “build, battle and laugh your way through the Star Wars universe like never before.” The truth is, you’ll build, battle, and laugh…but I’m pretty sure we’ve done it all before.

It’s hard to talk about the storyline for this game because it’s not, essentially, innate to this game. The storyline takes from the Star Wars: The Clone Wars era, and with that comes definite bonuses and a few problems too. 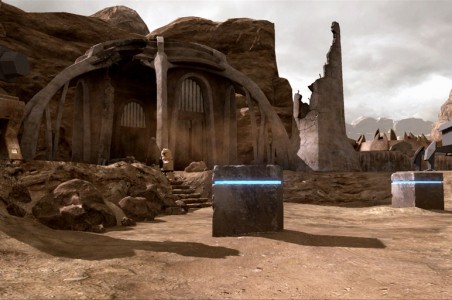 The storyline is standard: the Republic and the Trade Federations are unhappy with the growing amount of power each was wielding in the galaxy. Nute Gunray of the Trade Federation ordered a blockade of Naboo to gain political leverage, but his move backfired and Senator Palpotine of the Republic Federation uses this to rise to the position of supreme chancellor of the Galactic Republic. However, Senator Palpotine is actually also Darth Sidious, a Sith Lord who has an evil plan for the galaxy. He plays the Jedi Council and the Separatist Army against each other in a bid to carry out his plans. As with the series, the game has a series of multiple plot lines where different characters will be in different places doing different things at the same time.

The game begins with a fork in the space road, so to speak. On one side, you’re hunting down General Grievous who leads the armies of Separatists, and on the other side it’s a search for Asajj Ventress, a Dark Jedi. Players can even enter Story Swap mode, swapping between different character storylines in the same mission to complete individual tasks before uniting at the end for a battle or resolution. This fork in the storyline is an interesting one, and really does let the gamers play out this title with a similar feeling to watching The Clone Wars.

That does become a problem though: a lot of the time, it does feel like you’re watching the story rather than playing the game. While the Free Play option allows players to freely roam around a level after you’ve completed it, in the beginning of story levels (and throughout) there is a decent wait before you actually get to play. LucasArts do get trapped in their own idea in that regard: retelling the Clone Wars series isn’t just taking a film and turning it into a game. Instead, they have to pack parts from two seasons and a film into a game that is playable but true to the storyline itself.

It can also be terribly difficult to understand what’s going on in the game without prior knowledge of The Clone Wars. While players can read the prologue for each mission, it really doesn’t help when the LEGO characters speak about as much English as in The Sims. For any Star Wars novice, getting a grasp on the storyline should be a mini-game in itself because the LEGO figures aren’t introduced at all. LucasArts assumes a prior knowledge of the characters, but when Obi-Wan and Anakin have the same coloured hair it can get a little bit confusing unless you’re paying attention.

Fans of the LEGO Star Wars franchise will go into this game and be quite thrilled with the graphics. While it’s not the Heavy Rain of the LEGO series, the characters look polished and sleek – it almost seems like you’re watching real life LEGO figurines on the screen at times. The world of LEGO Star Wars III: The Clone Wars is also expansive, with a multitude of different environments to explore and characters to unlock. 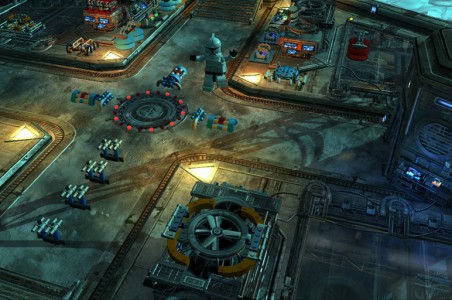 The basic principle for graphics in this game is simple, yet complex. The LEGO designs are in no way meant to have the detailed expressions of a person, but they are clear enough and cute enough that nobody really cares (why would LEGO want them to look like real people anyway?). However, the complexity and extensiveness of the graphics shine when you stop your gameplay and take a minute to admire the environment around your character. Every corner of this world is built brick by brick – quite literally – and it’s an impressive feat when you take notice of the details behind each LEGO brick or the rendering behind a setting. One of the early missions, Duel of the Droids, features a setting in mid-air, and the detail placed into the view and the contrast is just fantastic.

The colours do appear richer and brighter than previous games in the series – which it should do, actually, because the last LEGO Star Wars title was released in 2008. The cut-scenes are well-rendered, with several close-ups that show the true sleekness behind these LEGO creations. The animations of the characters inject them with a certain comical life, and it’s only through the cutscenes that players will really get to witness this. Of course, these scenes aren’t short of action either; there’s plenty of flying, fighting, and light sabers.

LEGO Star Wars has always been known for its great sound effects for light sabers, explosions, and in the general way of characters’ expressions. This game is no different; the sounds are synchronized wonderfully to bring the LEGO Star Wars III: The Clone Wars world to life. Of course, the degree of ability involved for voice acting is fairly minimal, which cuts out one of the key issues many games have with bad voice-acting. 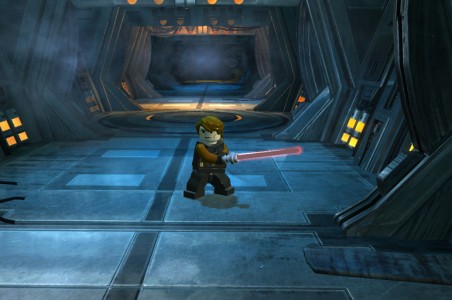 Like the visuals, the sound effects seem simple until you take a minute to stop and realise how much work has gone into syncing up the sounds with particular movements. While I was running around (as annoying as this was) I realised the little things were what brought this game more to life. When your light saber touches the wall, the sound effect is immediately triggered. When you shoot lasers using different buttons, different sounds are used. It’s the small details which really bring the sounds to life in this game.

The soundtrack in this game is pretty standard for any of the Star Wars franchise. I’m not too certain if it’s the same music from the film and series or not, but it sure does sound the same. It is absolutely epic, as usual…and nothing else that needs to be said but that.

Gameplay is where this game both wins and loses. On the one hand, it utilises great features to create some awesome new experiences, and on the other hand it’s still the same old, same old. Of course, the motto is “if it isn’t broken, don’t fix it”, but I’m beginning to think LucasArts and TT Games should employ a new strategy: “if it’s already spawned three games which have been criticised for having gameplay that’s too similar, don’t make another one does the exact same thing…players can get bored, you know.” 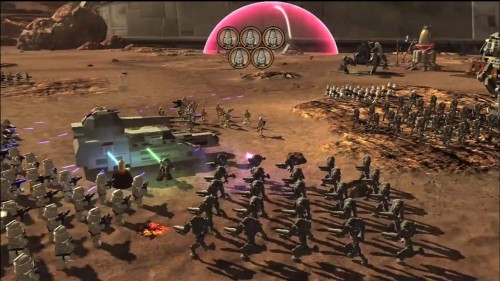 Of course, LEGO Star Wars allows players to make use of different skills in each mission. As usual, Jedis will use the Force while clones will shoot the crap out of things and droids infiltrate computer systems. Each of these characters also has special abilities which help them progress through levels; sometimes a clone may need to grapple, or the Force may be needed to reassemble some parts so you can progress to the next level. This game uses a combination of puzzle-solving, hacking and slashing at things, and battlegrounds which employ strategy tactics. There are also a ton of unlockable characters to find which can be used in gameplay like Boba Fett, Han Solo and Princess Leia.

This game is definitely a lot more enjoyable in multiplayer mode, which is fair because it is catered for the family. Multiplayer mode sees players controlling their own individual characters in the mission, and working together to solve the puzzles and beat the bosses. It’s far simpler too because you don’t have to constantly switch between characters to see which abilities need to be used to progress.

One thing I did have a concern with in the game is that sometimes it’s not clear what you’re required to do to move on in the mission. Some pieces which need to be reassembled using the Force, but unless you’re controlling the Jedi, you won’t see the faint glow around the items hinting at what to do. However, for the most part the commands for the games also come up very clearly on the screen in massive text, which means it’s fairly simple to follow (bearing in mind this game is designed for children to be able to play). 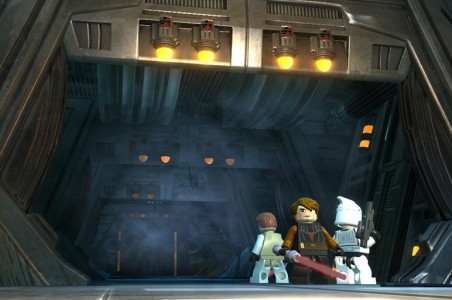 There are also small issues which popped up for me: you can’t really change the view, so half the time I’d be running into a little nook and just mashing X until I hit what I was looking for. Also, at times if you are hitting panels to make more studs pop out, you have to aim fairly well to hit the right spot. They’re little things which don’t affect the overall game, but it really can be frustrating at times.

This was a great way to revive the LEGO Star Wars franchise, but I do hope this is going to be the last one for them. I personally think LucasArts and TT Gameshave pushed LEGO Star Wars as far as it can go without doing a complete overhaul of the game. Overall, the game is fun and will provide many hours of enjoyable gameplay, but in the greater scheme of things though, I don’t think it’s one I will remember for the rest of my life.

I give LEGO Star Wars III: The Clone Wars