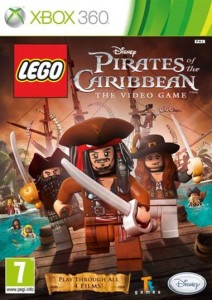 It has been a busy year for Traveller’s Tales, with LEGO Pirates of the Caribbean complementing the other LEGO games put out so far this year, LEGO Ninjago and LEGO Star Wars III. This is further added to by the recent announcement of LEGO Harry Potter: Years 5-7 coming towards the end of 2011. I imagine the employees at Traveller’s Tales now dream in LEGO, with Pirates of the Caribbean becoming the latest franchise to be immortalised in plastic brick form. 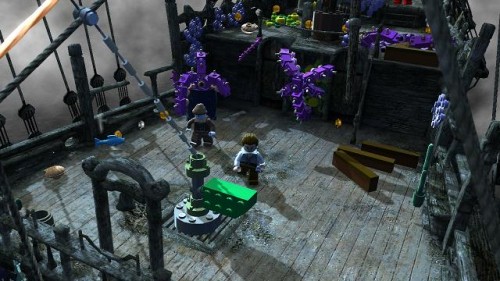 As you’d expect, the basic gameplay remains at the games core, simply carried over from previous games in the series. Levels are made up of a balanced mixture of adventuring as you traverse different platforms and climb or descend to other areas in order to obtain objects of some relevance, action as you engage the other LEGO characters in combat, and simple, logic-based puzzles presenting obstacles to solve before you can move on to the next zone. Like previous games, what comes as a result of this LEGO game is a refinement of the formula. With each new game, the developers try to make an even smoother playing experience, and, as such, a few smaller improvements have been made that only fans of other LEGO games are likely to notice and appreciate. One example of this the new character wheel, accessed by holding down the Y button. In previous games, swapping characters meant walking up to the playable character you wished to change to and pressing Y in order to transfer control to the other character. However, this could be a minor nuisance due to the fact that, sometimes, you’d have to track back to find the other character you wanted, or if there were multiple characters, you could end up rallying back and forth between the wrong characters in a game of soul ping-ping, until eventually becoming the character you meant to. 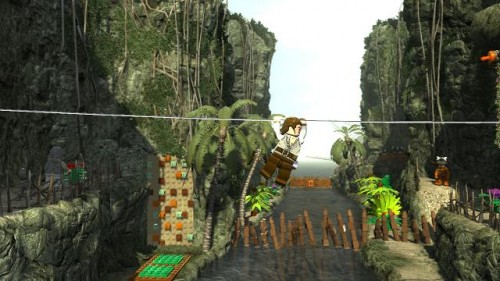 One of the other new additions is split-screen co-op, something that is likely to cause a divide among players in opinion, as well as while playing the game. You see, unlike any other LEGO game before it, LEGO Pirates features the same iconic drop-in, drop-out co-op, only now, co-op play introduces a dynamic split-screen bar. By this I mean that the position of the divide separating each players’ screen is constantly changing, meaning that while being able to be in the traditional horizontal or vertical positions, often the split-screen divide slices diagonally through the screen. This only happens when players are a certain distance away from each other. Unfortunately, this distance is very short, so it’s hard to get comfortable with the screen continually adjusting, in many cases reuniting with the other player for a brief moment only to split again, leaving players on flipped sides of the screen (for example, player one is usually associated with the left side of the screen, but with this system they are constantly changing from left to right).

It’s a hard system of multiplayer to get to grips with, despite the fact that you don’t have to do anything and segments of the screen control themselves as you move around, and for this reason, it could cause differing opinions among the players. Some will prefer the freedom to explore the level almost individually due to this addition, because in the past the limits of the camera in LEGO games could be quite frustrating if the other player was refusing to co-operate. However, a lot with find it to be a slightly confusing and disorientating experience, and whereas all other games have had a concentrated focus on teamwork, that attitude sort of slips away now that you aren’t limited to the same screen. 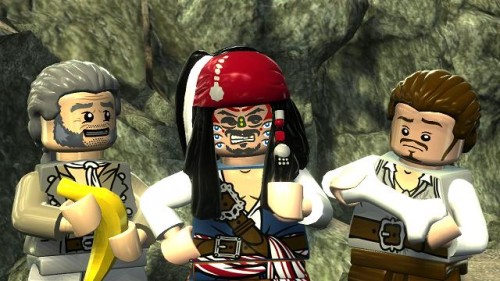 All in all, there are 4 films to get stuck into, with each movie broken down into 5 levels summarising the key scenes. As always, the cut scenes are a great watch, offering a cheap laugh for children and adults alike, providing you’ve seen the films and have a frame of reference. For this reason, the chapters on the brand new film just hitting cinemas, On Stranger Tides, would be more enjoyable to play after having seen the film so you know what’s going on. In this iteration, the developers have also managed to give the characters a lot more personality. Emotions used to only be conveyed during cut scenes in sequences of grunts but during gameplay the characters seemed like plastic mannequins. In contrast, LEGO Pirates features the same clever sequences of grunts to make for amusing cut scenes, but also during gameplay, the swashbucklers have been given an injection of personality, with Captain Jack’s tipsy swagger and Will Turner’s frequent looks of bewilderment ringing true to the films.

With the luscious Caribbean setting, LEGO Pirates is the best looking LEGO game yet, with the showing off coming in the form of dense forests, sandy shores and glimmering water effects. In some ways, Traveller’s Tales have even gone a bit too far with the sheen, with overly shiny character models, but it’s easy to forgive them due to the fantastic-looking environments. Memorable music is carried over from the films, with slapstick LEGO sound effects playing their part too, making for a great overall feeling for the game. 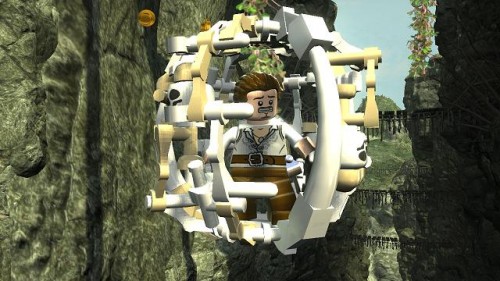 Regretfully, like all other LEGO games in the series, the occasional bug or glitch rears its head. These are mainly excusable and can often be quite amusing, such as someone getting jammed on a piece of scenery, or even more entertaining, upon getting snagged on a piece shrubbery, being flung into the air higher than ever possible by jumping. Like I say, however, these have almost always had a presence in the series and are nothing particularly new. Conversely, some of the bigger bugs can’t be overlooked, such as one I encountered on the Smuggler’s Den level regarding the final cut scene. Despite completing the necessary task to initiate the completion cut scene, thus ending the level, the video failed to go off, meaning I was stuck in the level with no choice but to quit out and restart again, all the more frustrating as there is no checkpoint system to chart progress mid-level. Other than that, some of the platform sections can be a bit fiddly, such as a swinging chandelier near the start of the fourth movie.

However, even with minor drawbacks taken into account, it’s still another quality LEGO offering, and though it may not quite have the best gameplay, it certainly has the best graphics of the current line-up. Adding fantastic brand of LEGO humour that’s imaginatively applied to the Pirates of the Caribbean films, characters have a personality during gameplay too, each with their own different mannerisms drawn from their silver screen characters. If you’ve seen at least a couple of the Pirates of the Caribbean films and have enjoyed other LEGO games, chances are this is one for you.