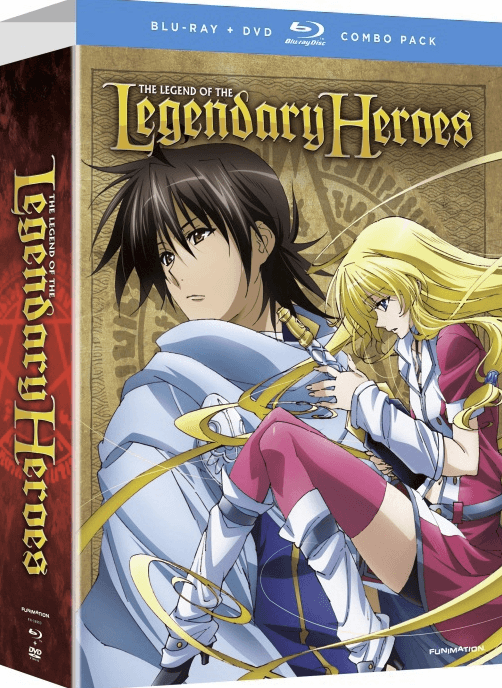 Overview:
Whenever a company localizes a product for release in the West and they must adapt the title’s name to English there are two things that can be done. They could either adapt the anime’s name into something fitting that sounds proper in English, or they could go for the literal translation which sometimes causes a few problems. FUNimation chose the latter option when they brought Densetsu no Yuusha no Densetsu to North America as The Legend of the Legendary Heroes.

Originally a forty volume long light novel series written by Takaya Kagami in Japan that has been adapted into multiple mangas and an anime adaptation was created in 2010 featuring 24 episodes. FUNimation has split the series into two separate parts released on the same day. Does part one successfully kick off this legendary story?

Story:
Our story follows a young man known as Ryner Lute who would much rather be napping than going on a quest for legendary artifacts. However that is exactly what Ryner is tasked to do. When Ryner was just a teenager he was imprisoned by the previous king of Roland for possessing a devastatingly destructive ability known as “Alpha Stigma.” The Alpha Stigma allows the user to copy any magic ability used by another magic user and wield it as their very own. While this may sound like a blessing, it is in fact a curse as any Alpha Stigma wielder can easily go on a rampage and murder everyone in the vicinity regardless of whether or not they are a friend or foe. 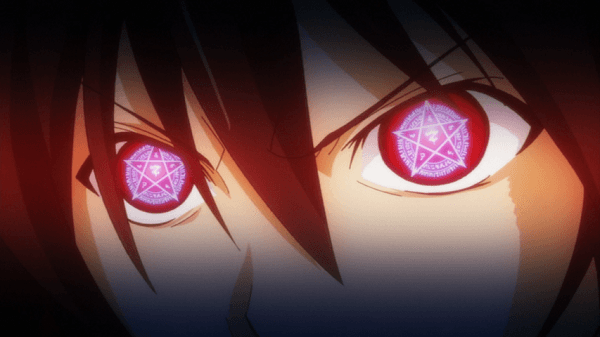 Despite being imprisoned for two years, the new king of Roland releases Ryner from jail, surprisingly enough because the new king is his old friend from the Roland Royal Special Military Academy, Sion Astal. Sion’s purpose for releasing Ryner extends beyond helping out a friend however, as he has tasked Ryner with the quest to seek out “hero relics.” These relics are weapons that were used by heroes of legend that established the world that they live in today and with the use of these relics Sion seeks a way to bring peace to the land. To go along with Ryner, Sion sends the skilled swordswoman Ferris Eris to assist him, despite her displeasure in doing so. With Roland at war with Estabul and the threat of more wars on the way, can these two discover relics of a long lost age and perhaps unite the world in peace?

The Legend of the Legendary Heroes’ contains an interesting premise and a slew of different characters to draw upon, however therein lays the problem. The first part of the series spends a lot of time focusing on every Ryner’s, Sion’s and slightly on Ferris’ backstory in flashbacks meaning that instead of moving the story forward we spend a lot of time learning about Ryner’s past and his connection to Sion. This is understandable for the most part as it does add more to Ryner’s character as a whole but does tend to delay actual story development significantly. 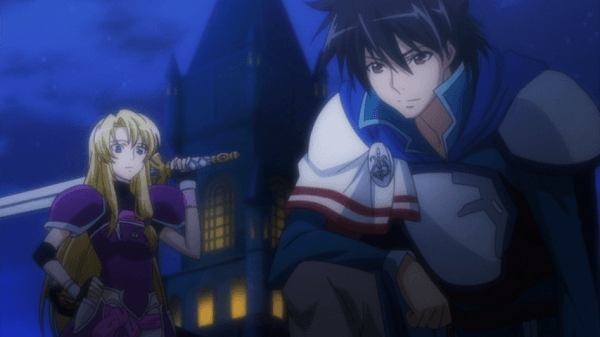 Another issue is that there are multiple stories being told at the same time in Legend of the Legendary Heroes. While most of the time viewers will be following the journey of Ryner and Ferris as they make their way through various lands in the search of relics other times the focus will shift back to Sion as he makes critical decisions about the future of Roland and deals with a crushing workload, backstabbing politicians, wars against neighboring nations and even one of his own allies who will do anything to see the kingdom remain intact, even if it means putting Sion’s own friends at risk.

This creates a stark contrast from the oft hilarious interactions between Ryner and Ferris as they search for relics and try to get along and the convoluted political side of things with Sion. In fact, it is disappointing that so much extra time is paid to the political side of things as the story truly shines when it focuses on Ryner and Ferris. With Ryner’s lazy work attitude and Ferris’ love of dango driving her forward the two make for quite a comedic pair that often involves physical comedy. Unfortunately these shining moments are often left behind for various branching storylines that seem to have zero effect on the overall story. 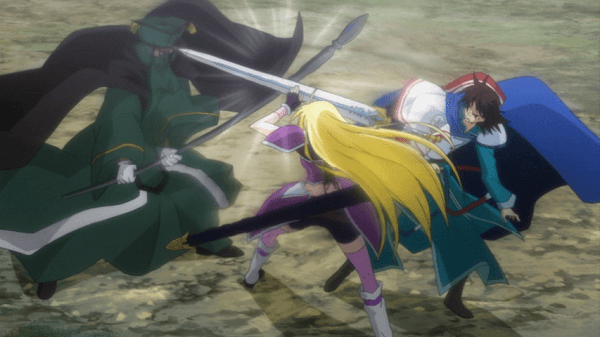 This first half of the Legend of the Legendary Heroes presents us with just a bit too much backstory but begins to move the story along nicely towards the end of the series as Ryner and Ferris encounter another pair of adventurers seeking out the relics for their own purposes. Not only do these two adventurers already possess a few relics of their own, but one even seems to know the secrets behind the Alpha Stigma. As one may expect, the first part of the series leaves off on a cliffhanger in lieu of continuing the story in part two.

Visuals:
While the character designs fit easily into your standard fantasy adventure setting, the attention to detail on these designs is what makes each of these characters shine. This is a good thing, considering the characters’ facial designs leave a lot to be desired as their expressions are often lacking the same quality as the rest of the show which is full of vibrant colors and careful attention to detail, especially when it comes to the amount of blood that the series contains. 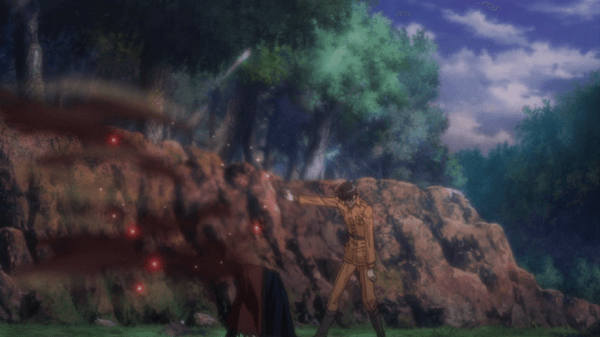 The backgrounds and environments are exceptionally well detailed and diverse, focusing heavily on a medieval European setting mixed with magic. On top of that the battle scenes themselves are impressively well handled with CGI elements mixed in with the standard animation. The magic attacks used are as impressive as they come and the same can be said for non-magic related combat. This makes the first part of The Legend of the Legendary heroes quite an impressive offering as it will leave viewers eager to see more of the same high quality action.

Audio:
As standard with FUNimation’s releases there is an English voice track as well as a Japanese voice track for the purists out there who prefer listening to the Japanese voice actors. As for the English dub cast, they perform their jobs admirably enough for a series with as much back and forth dialogue as Legend of the Legendary Heroes contains and the fact that so many of the characters feature their own unique way of speaking. This is especially true with Ryner whose voice actor Ian Sinclair had to handle his unique personality amongst the rest of the characters. 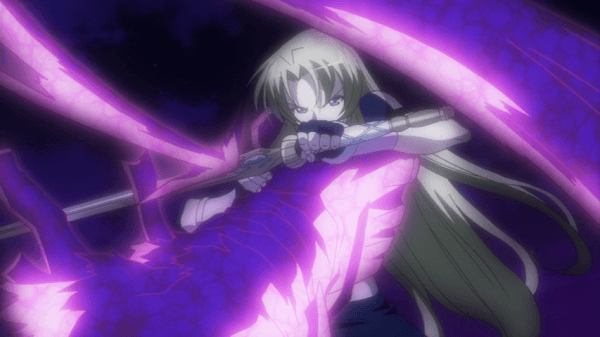 The first part of Legendary Heroes’ background music is suitable enough and heightens the mood of whichever seen it occurs in. The action scenes deserve special mention for the impressive sound effects that accompany them. This first part of Legendary Heroes features “Lament~Yagate Yorokobi Wo~” by Aira Yuuki as the opening song and “Truth of my Destiny” by Ceui as the ending song. The opening song fits well with the action fantasy theme of the show and is accompanied by impressive animation that viewers may want to watch more than once. The ending song on the other hand features a slower pace and dramatic images which are surprisingly fitting. We are also given a brief glimpse at Part 2’s opening “Last Inferno” and ending “Hikari no Firmento” in the final episode of this set.

Extras:
The extras included for Part 1 of Legend of the Legendary Heroes are what most would come to expect from FUNimation as it contains a slew of trailers for their past and upcoming releases alongside clean, textless versions of the opening and ending songs.  Besides these standard inclusions there is also an episode commentary on each disc.

The two episodes which receive this commentary are Episodes 03 and 09.  Episode 03’s commentary features Brina Palencia who plays Kiefer and J. Michael Tatum who plays the character Miran and is also the lead adaptive writer. The two discuss the cast and the characters of the show with a mild amount of comedy. 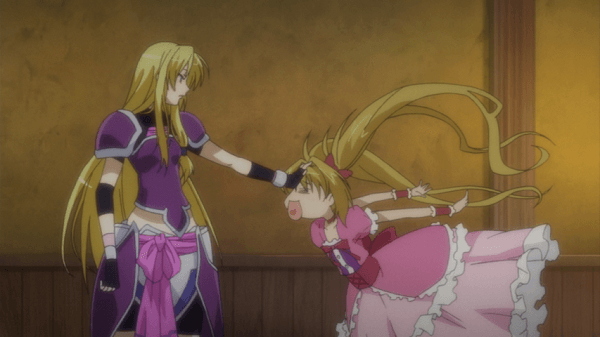 Episode 09’s commentary features Colleen Clinkenbeard, the voice of Noa as well as director and line producer, as well as Monica Rial who plays Iris, Ferris’ younger sister. Unlike the first commentary, this one features a lot more comedy as Colleen and Monica have great chemistry in the recording booth. It is a bit disappointing that none of the more main cast was given a chance to take part in the commentary, but it is good to hear from these voice actors which may never have taken part in a commentary until now.

Overall:
The Legend of the Legendary Heroes is an intriguing fantasy adventure so far in Part 1 and offers an enjoyable journey of a mismatched pair who slowly grow to work together over the course of their trials. However the series tries to keep too many balls in the air at once and often the plot suffers because of this. Instead of following the fantastic journey of Ryner and Ferris or even the interesting and darker political plot of Sion the series often goes on extended tangents that feel half-hearted and incomplete.

On the other hand, when The Legend of the Legendary Heroes Part 1 does keep itself to moving the plot forward, it creates a fascinating fantasy adventure story that will hook you with its comedy and action and leave you to understand the plot as it slowly unfolds.